When I was a kid, I used to watch this anime called Rurouni Kenshin aka Samurai X every Saturday on NTV7. Back when RedFM DJ Sarimah was called Kak Sarimah. This anime holds a special place in my heart because it made me embrace my inner anime-nerd.
Now, x number of years later, Warner Bros decided that anime was cool and decided to turn to Rurouni Kenshin into a live action film.

Admittedly despite the promising trailer, I was skeptical at first, no thanks to the disaster anime-turned-movie Dragonball (How can a white kid play Goku?). Usually most attempts to turn anime or games to live action movies often goes down in smoke so you can understand my skepticism. Then I managed to watch it on my flight to Maldives onboard Singapore Airlines and boy, was I glad to be proven wrong.

The movie was awesome!

Gist
Without going overboard with the special effects for the action scenes, the film cleverly combines the plots in the first arc of the anime and brings it to life. Rurouni Kenshin is basically about a former assassin for the Meiji Government known famously as Hitokiri Battosai (Manslayer) who after the war, trades in his killing ways for a reverse-edged sword (which is almost useless for killing) and wanders Japan, aiding those in need as atonement for the murders he once committed. Along the way, he meets a few people who become his friends and allies as well as enemies looking to claim his Battosai title or to destroy the peace he once fought for.

Verdict
﻿
The fighting scenes are downright exciting to watch without being too unrealistic. The director has really done a good job here as he has given fans of the anime something akin to the action they are used to while keeping in mind that this is a real life action film and therefore there are certain things that just can't be done in real life. Like jumping 5 meters high and landing on a broad sword held by a man.

Takeru Satoh plays Himura Kenshin right down to the tee from his physical appearances and sword play abilities to his mannerism that can switch from downright clueless and sweet to just cold and emotionless. I am impressed by whatever training Satoh endured just so he could move and fight like how I imagine a samurai would move.

﻿
The rest of the cast depicted their roles well and it was nice to put a person's face to these characters.


My main issue is the actress who played Megumi Takani, Yu Aoi who came off as a tad too young to be playing the foxy woman. Her scene where she flirted with Kenshin made me cringe because it looks so wrong. But when the moment called for, she did manage to beautifully project the conflicted side of the doctor, guilt-ridden from creating opium for a drug lord in order to survive. 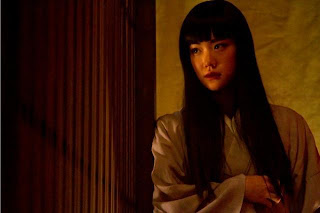 I would like more scenes of Hajime Saito simply because the actor, Yosuke Eguchi is so cool playing the slick-haired cool cop. If you're a Rurouni Kenshin fan, then I recommend watching this movie because it is exciting to see one of your childhood anime brought to life and have justice done to it. Hunting down the subtitled movie online will be a challenge but it will be worth it!