The Life of Pi Movie Review 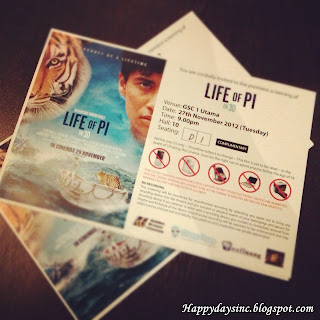 A big thanks to Nuffnang for the invites for the premiere screening of Life of Pi.
My mom has been looking forward to Life of Pi since she read the book and heard they were making a movie out of it. So naturally when Nuffnang announced the contest to win movie passes, I jammed on my creative thinking cap and answered their question with gusto! (I did this for you, mom -_-)

If you were shipwrecked on a deserted island, what would be the 3 things that you will take with you?
If I was shipwrecked on a deserted island, I would bring:
1. a lightsaber to use as a torchlight, to cut things and to kill animals for food. (yes, the force is strong with me)
2. First Aid kit to tend to myself and other survivors. (nothing else matters if we were dead right? Unless this was the world of the walking dead...)
3. a smartphone with Tony Stark technology and JARVIS to broadcast a SOS into satellite signals worldwide. (apparently I live in the Marvel-universe)

But as the movie goes, having a terribly overactive imagination isn't not bad thing. 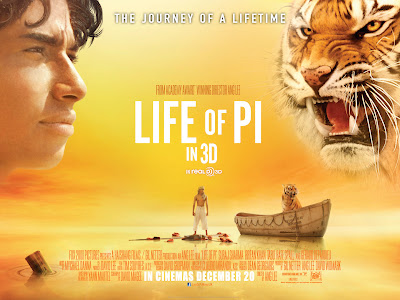 Have you ever heard a story so unbelievable that you would much rather believe it more than anything else?

Gist
Life of Pi is one such a story of a boy shipwrecked and forced to survive on a boat with only a Bengal tiger named Richard Parker as his companion based on Yann Martel's novel. Director Ang Lee was the mastermind behind this visually stunning novel-turned-movie with clever and magical use of the 3D effect to enhance the experience all together.

Verdict
Usually I am not one for 3D effects but this movie sold me on it once more, thanks to Ang Lee's ability to inject it into the places and scenes rather than the action part which were few. The depiction of the ocean world, above and underwater was just stunning. But the most memorable was this sinking ship scene as seen from Pi's point of view which is said to rival the epic Titanic scene for all its emotional glory.

While we may be taken on a magical adventure, the reality faced by its characters still remain intact. Richard Parker still remains a wild Bengal tiger that cannot be tamed like a house cat and the fear, desperation and hopefulness of the titular character can be felt throughout his unusually situation out at sea with a tiger.

Amongst an impressive international casts of veteran actors, newcomer Suraj Sharma puts up a stellar performance as a 16-year old Pi who lost everything and thus was stripped down to the basic human need to survive and oddly enough the only thing keeping him alive was Richard Parker who would easily kill him just as well. Every event in the movie depicts a turning point in Pi's life and holds a somewhat double meaning to it once you have given it thought.

This movie in a subtle sense speaks of how God (regardless of which religion as Pi himself has embraced Hindu, Christianity and Islam) works in mysterious ways. I remember one of Pi's line that nicely summise up the irony of his situation which goes something like this:

"Taking care of Richard Parker was keeping me alive and my fear of him keeps me alert."

Probably due to time constrain and audience sensitivity, some of the darker and more gruesome parts of the novel have been omitted out. But if you haven't read the book, you won't be at a lost. The main core of the story still remains beautifully heartbreaking and captivating.

Even if you chose to believe that this story is too out of this world, I recommend watching it. In 3D for its visual effects.

Watch it to be taken on an adventure. Watch it for a change in your perspective of life. Or if you're like me, watch it for the tiger.