I bet your CNY holidays was spent getting stuck in traffic jams on the way home, eating and drinking, having reunion dinners, taking family portraits, house-visiting to collect Ang Pows and wearing red a lot.

As for me, my parents did go back to Taiping to visit my grandparents with my relatives....and left my sister and I behind. As we have a mind-boggling number of cats and dogs, we stayed back to babysit them and the house during the festive seasons. Not that we mind as we took advantage of a very-jam-free-KL.

Cherrie and I also went hiking for the first time in a long time at Bukit Tabur with Sunil, Alex and newly befriended Norizan from bootcamp as well as Yasmin from my swim team days on the first day of CNY. Due to the series of hikes and activities coming up, I got myself a new pair of New Balance trail shoes the day before and planned their maiden vovage to Bukit Tabur.


Our group of six got to the foot of Bukit Tabur at 730am and already, there were quite a lot of cars parked along the side of the road. Apparently the regulars come to the hill at 6am for a good workout.
Still it wasn't as crowded as Gasing Hill but that could be due to it being a public holiday.


Bukit Tabur is a limestone ridge located in Taman Melawati, Kuala Lumpur and is part of the Klang Gates Quartz Ridge. Standing at less than 1000m, the hill consists of a few peaks and the most frequented entrance, Tabur West starts near the Klang Gates Dam. For detailed instructions and GPS coordinates, click here.

With the first rays of sunlight peeping out from behind the ridge, we made our way up the hill. The first stretch of forest had me panting and reminded me of Gasing Hill. For the record, cardio hikes are not my forte. However, after good ten minutes of forest hiking, the route became less strenous and the view got more rewarding.

﻿
At the first peak, we stopped momentarily to admire the stunning view of the Klang Gates Quartz Ridge that divided the Klang Gates Dam and the concrete jungle that was Kuala Lumpur. Behind us were two other peaks, running side by side like camel humps. As the sun continued to rise up from behind these two peaks, the rays broke across the scene and created a surreal sight.

We soldiered on, going higher and further along the ridge. We met several other hikers along the way, many posing for their cameras and some even, picnicking on the rocky flat spaces. During one of our breaks, my friend Shaun caught up with us, having arrived late and was panting and sweating hard by the time he joined us. But then again, he did sprint up the hill, a feat not many could accomplish.


We had to conquer seven peaks that morning and each got a little harder and more challenging to get to as we went along.  Tall trees disappeared, replaced by limestone rocks and formations as well as shrubs and mosses. Photo opportunities were at an abundance due to yours truly being a 'capture-the-moment' person and truly every peak and climb had me snapping away.


Of course, Bukit Tabur wasn't as tame as Gasing Hill or Broga. On both sides of the ridge pathway was sudden drops and huge boulders created obstacles to scale around. The hill demanded respect from its visitors and you better give it just that as there has been reports of deaths and accidents on Tabur. People have gotten lost, injured or died due to their over zealousness and for underestimating Bukit Tabur.

﻿﻿
When it came to the rock-climbing bits, I tucked my cameras away in my backpack to free up my hands and did the climb with extreme caution. I loved it though, despite or maybe because of the element of danger. I often had to rely on my upper body strength to boost me over ledges and if it wasn't for bootcamp, I wouldn't have the strength or the stamina to do it. Good hand and eye coordination also comes in handy when moving along the rocky ridge to avoid falling flat on your face. Being a parkour expert will be a huge advantage. 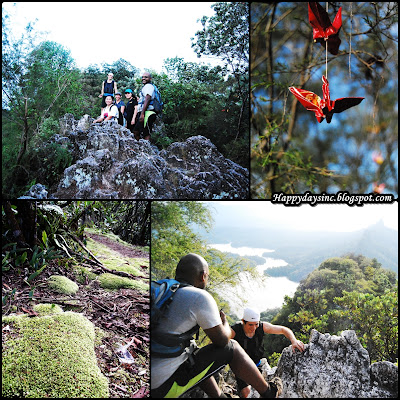 Midway though, we came across two paths to take around a boulder, one harder than the other. The harder (and scarier) route involved climbing rungs drilled into the rocks while the other requires us to climb down a short but vertical slope using a knotted rope with little foothold space. As some of us were rookies, our unofficial Tabur guide, Sunil opted for the rope and gave us precise instructions on scaling down. It was scary at first as beyond the tiny ledge was another sudden drop and all you had to cling on for dear life was the rope and your own arm strength. But when I actually did it (without making a fool of myself), there was a deep sense of adventure and satisfaction. Must be the adrenaline rush.


That also have me a good burst of energy that carried me through the next few peaks. I decided there and then, I was in love with Bukit Tabur. The greenery at the higher peaks were incredibly picturesque and we were fortunate to have a cool breeze cut through every once in a while.

Past the last peak and the turning point to go back, Shaun showed us a path that continued a little further on and ended in a sudden drop. He got lost here the last time and scaled midway down before the danger of it dawned on him, making him return to the original trail. As beautiful as Bukit Tabur was, its dangers should not be undermined.

As the saying goes, what goes up, must come down. There were two trails that we could use to return to our cars. Go back the way we came or head down a dirt trail along the side of the hill. Majority headed for the latter although Superman Sunil opted to go through the rocky peaks again.

The trail downhill was reminiscent of the trails I used to thunder through when I joined the Hash House Harriers but instead of running, we walked. Like normal people who just finished climbing a hill. It was relatively quite an easy, uneventful brisk walk back to the car, although albeit long. Alex lead the charge downhill, doing even the Gangnam Style (briefly) on the way. I did pause to glance back up at the ridge and I felt so tiny and amazed that I was even at its peak.
﻿

It was about 1030am by the time we reached the car to unload our backpacks and unwind (and to stare at chicks...and hens) while waiting for Sunil. He joined us 15 minutes later, delayed only because he stopped to help a group of girls stuck on the rung trail. Apparently their uncle led them there before heading ahead and leaving them behind. Tsk tsk. Bad uncle.

Due to the lack of human traffic on the hill, we completed Bukit Tabur in three hours with plenty of breaks and photo sessions in between. I really enjoyed loved the hike/climb, my new shoes and most importantly, the company. Really, the company makes all the difference in an activity like this.

Thank you, Sunil for planning this trip and guiding us through Tabur with the patience of a saint.
Thank you, Alex for (not ffk-ing) driving us there and leading us noobs down safely.
Thank you, Norizan for the laughter and jokes up there and for the most rewarding brownies ever.
Thank you, Yasmin for giving up your Sunday to join us and make new friends I hope.
Thank you, Shaun for looking out for my sister and also for helping us along.
Thank you, sis for allowing me to drag you along.
Thank you, adventurous random stranger who followed us all the way down.
And thank you, Bukit Tabur for reviving my adrenaline junkie and interest in hiking once more.


1. Invest in a pair of proper hiking/trail shoes, preferably lightweight.
2. Wear gloves for the rock climbing parts.
3. Go with an experienced friend and stick together.
4. Bring two bottles of water or isotonic drink.
5. Use a backpack to free up your hands.
6. Leave your ego at home. Better to be teased than dead.
7. Bring a camera.
8. Always let faster hikers through. But don't be afraid to ask for help if needed.
9. Don't look down! Seriously, watch where you're stepping at all times. Your next step could be a flimsy rock and your last....
10. If it rains, postpone the hike. Slippery trails are not your best friend.

It helps to read up more on other people's experience and on Bukit Tabur itself. I recommend All about Tabur and Vertical Adventure. Have fun and be safe!
Posted by Tania at 8:03 PM

Hi Tania, drop by for the first time and i am from Taiping too:)

I have been working in KL for several years but have not heard about Bukit Tabur:( I love sunrise scene and i heard that this place is one of the best places in central for sunrise viewing, when the day is clear, you can even watch out to the KL Tower:)

Hope to be there soon!

Hi, Simon.
Thanks for dropping by! I hope you get the opportunity to visit Bukit Tabur soon. To this day, it still remains one of my favourite hills to climb. The view and the terrain are really like nothing else I've ever hiked. But do go with someone experienced ya :)

dear young folks, life is previous .. don t risk your life for this as there are not enough safety features. many have died due to lack of forewarnings ...

Hi, Anon
Yes, Bukit Tabur has always had an element of danger to it. And sadly there has been a rise in accidents and deaths there recently. However I hope the authorities will put up more safety precautions rather than close it off completely. Until now, the hill's safety measures has been set up and maintained by veteran hikers, not the authorities.
And even if they do decide to close it off....I really hope the government wont use this as an excuse to bulldoze it to build a highway throughout it. Bukit tabur has our country's heritage, not some pot-hole filled highway with tolls to pay and mat rempits to use.

I did a quick plan to go Bukit Tabur. I found this through my search --- thank you for the great post. Anyway, I'll go there alone. - -

Do we need permit for hiking in Bukit Tabur? If yes from where we can get the permit

Sorry for the late reply as there was an issue with my email notification that didn't alert me of any comments. You can get the permit from Forestry Department in Cheras at rm5. Hope you had a good climb!

Sorry for the late reply as there was an issue with my email notification that didn't alert me of any comments. Hope this blog was helpful to your climb!

where the fun is in that, and why I would do it without a "purpose". I really don't have a detailed answer other than we do it because we can. guidancesports.com Best GPS Watch for Hiking