The Wolverine was not high on my list of movies to watch this year. The lack of promos and hype certainly didn't help the movie's popularity especially since it has to compete against more anticipated movies like Pacific Rim and Despicable Me 2. But considering the disaster movie that was X-Men Origins: Wolverine, I thought I should just give it a chance seeing as it was based on Chris Claremont and Frank Miller's Japan arc of the character. In fact, there was a Wolverine anime based on this storyline too as part of a collaboration between Marvel Animation and Madhouse.

Gist
The movie takes place right after X-Men: The Last Stand where Jean Grey/the Phoenix was killed at the hands of Logan sending him into a spiral of guilt and longing for his own demise. He goes into isolation and swears off violence, hunted by the memory of the woman he loved. However trouble has a way of finding him and it does in the form of a red-haired Japanese girl named Yukio who was sent by her master to bring Logan to Japan. Her master, Yashida was once rescued from the bombing of Nagasaki by Logan and after years of building his technological empire, was presently at his deathbed. To abide by his wishes for a final farewell, Logan travels to Japan where he meets Mariko, Yashida's granddaughter and the heir to the Yashida legacy. There amidst being caught in the middle of a family affair, Logan suddenly finds himself lacking his accelerated healing ability and facing the possibility of death.

Verdict
Let's start with the pros (Because those are easier). Hugh Jackman played a tormented Logan perfectly with his typical brawler and tough no-nonsense attitude that goes away when he is asleep and haunted by the spirit of Jean Grey (Famke Janssen). Jackman depicts a Wolverine who is tired of living while having to watch everyone he loves die while he remains immortal (sounds like a vampire problem). As a wounded and physically vulnerable Wolverine, he still proves himself lethal. There was one scene where he was literally declawed. That scene was heartbreaking to watch as all Wolverine fans would know the essence of his claws.

Rila Fukushima was a pleasant surprise and a thrill to watch on screen as Yukio. Her character was witty, sassy and emotionally endearing throughout the movie. She holds her own pretty well too whether with a katana or a pole. The sibling chemistry between Fukushima and Jackman is visible on screen and I definitely would like to see more of Yukio in the future (X-Men: Days of Future Past maybe?) 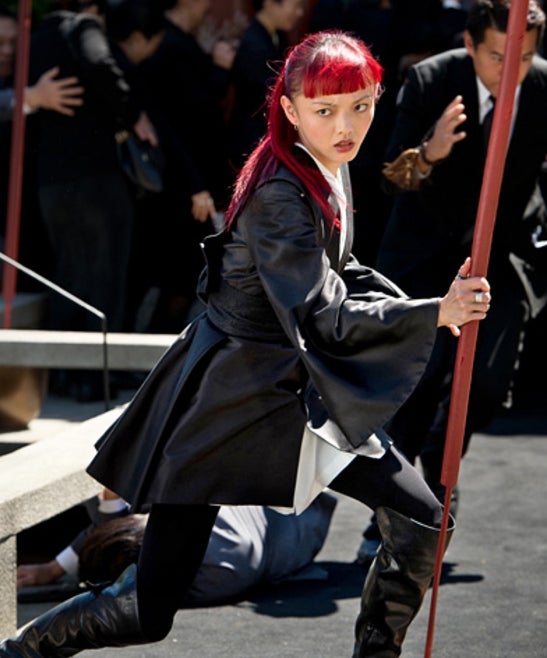 Now let's move on to the cons.Villains were weak. Viper played by Svetlana Khodchenkova tries to hold the screen as the decoy "Big Bad" villain but all I saw was Uma Thurman as Poison Ivy from Batman & Robin, cockiness, poison, slutty green outfit and all. And the Silver Samurai who was supposed to be real "Big Bad" was just...a bad imitation of Obadiah Stane's Ironman suit from Iron Man.
Mariko (Tao Okamoto) was a constant annoyance as a damsel in distress whom everyone in Japan wants to kidnap and despite her self-proclamation of being a dagger champion and coming from a family with samurai history, she finds herself grabbed and dragged through the streets and into cars every half an hour. I have no issue with the actress playing Mariko but didn't like the way her character was written. Knowing that she was the heiress to a huge legacy and would be constantly targeted, why didn't she learn a more advance form of martial arts or carry a gun or taser?! Even Yukio could hold her own better than Mariko. It's a shame especially for a movie set in today's age where damsels in distress are scorned at.

Some of the fighting scenes were absurd such as fighting on the bullet train and ninjas using bows and arrows over shurikens (throwing stars) and daggers was just....off.


Considering that it was set in beautiful Japan, it was a pity that they didn't get to show much of its wonders and instead showed its love hotels, ever busy streets where no one cares if you are being chased, the typical peaceful countryside town that supposedly embodied what could have been a 'normal' life for Logan and of course, the grand finale on at a tower built for no real good reason.

CinemaSins are gonna have a field day picking this movie apart...

Would I watch it again?
Nope. Now that I have caught the post-credit scene, there is no good reason to watch the movie again. Not even if it was free. In fact, I only decided to pay to watch it just to join this contest. All for a claw.
Posted by Tania at 11:55 AM