In Nov 2012, I had the pleasure of watching spinner dolphins leap from the ocean against the setting sun in Maldives and during my recent trip to Perth, I decided to take it a step further and actually go swimming with them. 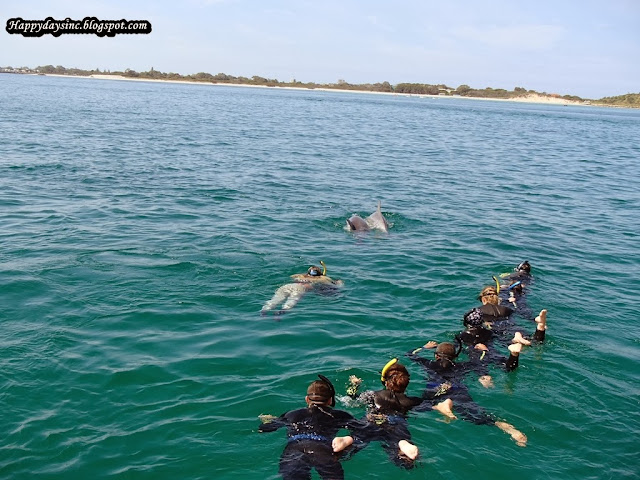 Monkey Mia is the famous dolphin sanctuary in Western Australia, far North of Perth but little does many people know that south of Perth and Fremantle is a cheaper alternative. Rockingham is a small quiet beach-side town about 45 minutes drive from Perth and is also the main base for Rockingham Wild Encounters' Swimming with Dolphins.
The price for such an experience is AUD$205 - AUD$225 depending on your pick-up location in Perth and is inclusive of: 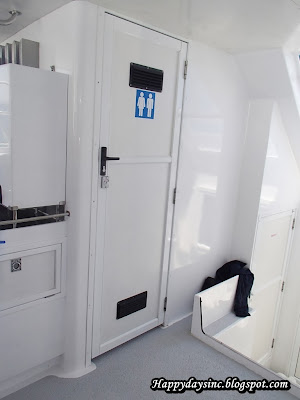 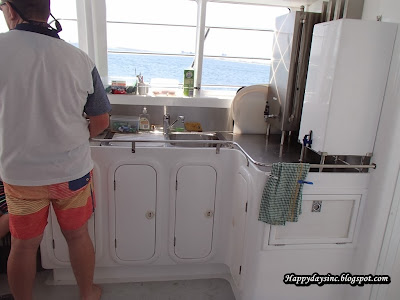 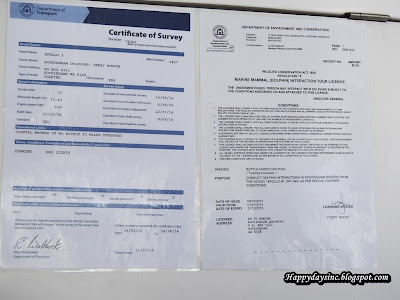 But thanks to a Australian Groupon deal, I only paid AUD$100 for all of the above. The rest of my team of 11 bought the same deal and after booking our slots months in advance, we jetted-over to Perth, took part in Tough Mudder (while trying not to sustain injury) and got up bright and early the very next day for this exciting adventure.

Our hotel was the Adlina Barracks Apartment, located in the Perth CBD and within a walking distance to the Wellington St Tourist Coach Stand where the Rockingham bus picked us up from. 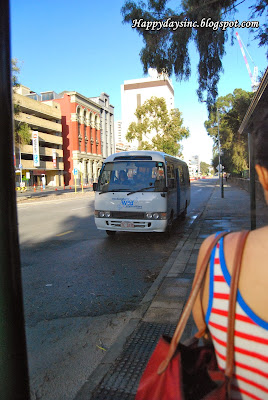 We boarded the bus along with a few other locals and off we were to Rockingham. After a good 45 minutes that just flew by, we arrived in the quiet town. We boarded the luxury, eco-friendly cruise boat waiting for us at the jetty and were given a thorough briefing of what we were to wear, what to do and what not to do and what to expect of the entire experience. 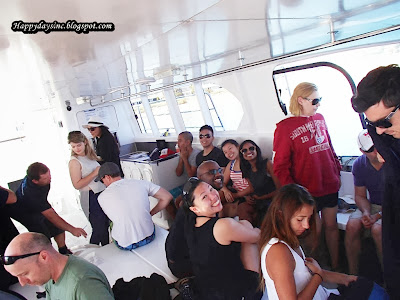 The crew was very experienced in handling a big group of over 30 people of different swimming experience or none at all. They kept us assured and separated us into groups based on how comfortable we were in the water. The wetsuit we were provided with had buoyancy so basically no matter how much we (basically, me so just I) tried, we just could not sink. A comfort to those who could not swim. 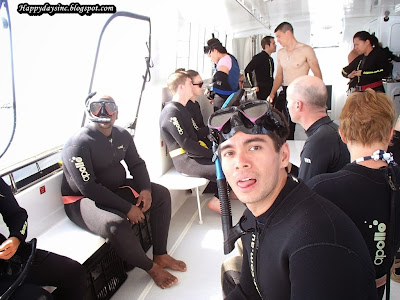 The dolphins we were about to interact with were wild animals and by all means, was not to be touched by us humans less we infected them with our stupidity any foreign disease. We were instructed to be quiet and not to splash about as we entered the water less we scared them off. As there was the possibility of sharks in the area, extra precautions were taken to fend them off in an underwater electronic device that interfered with their sensors and kept them from coming near the groups. Each guide diver in the group and one group member had to wear one each time we were in the water so we were perfectly safe. 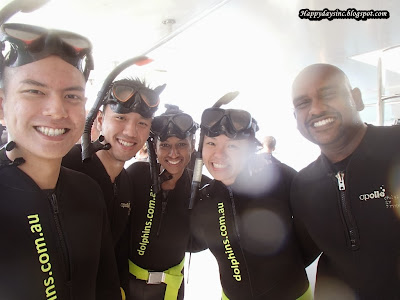 Just a tip for those with tiny bladders. Don't drink too much. While toilets are provided on-board, getting out and in of your wetsuit is too much of a hassle. It took me a good 10 minutes wrestling back on the suit in the toilet when they called out for us to get into the water. Basically you never known when dolphins are spotted and you might miss a chance if you are in the toilet.

And don't go in the ocean for goodness' sake! Just don't drink at all if you have to. 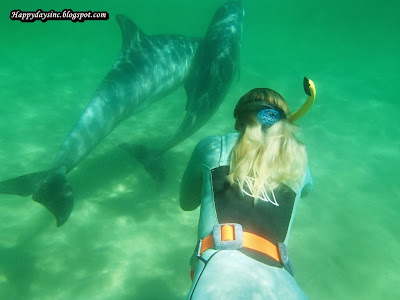 As soon as a dolphin was spotted, a diver would enter the water first with an aqua scooter in order to gauge its mood. If the dolphin(s) was agreeable to socializing with us, we were given the 'okay' sign to enter the water in three groups at a time. Using only either our left or right hand (as the guide instructed), we grabbed on to the belt of the teammate in front of us as soon as we enter the water and this formed a semi-circle to allow everyone a good view of the animal as it went about its daily routine. 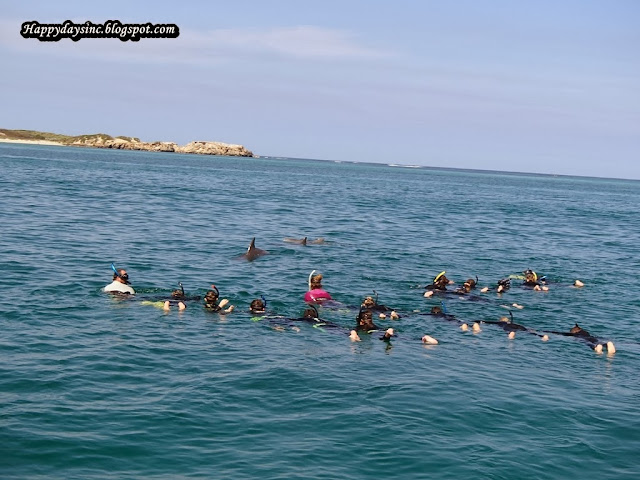 Mind you, the water was freezing cold but once we saw the amazing creature just darting about in the clear blue water, we just forgot about the cold and some people's cases, breathing all together. At times like this, I am thankful I had invested in an underwater camera for my Maldives trip the previous trip because now, I have photos to share! 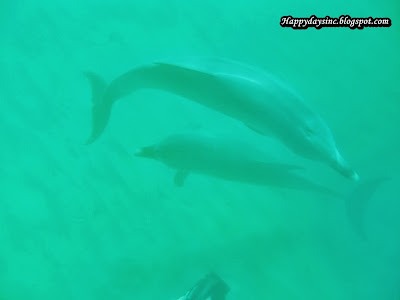 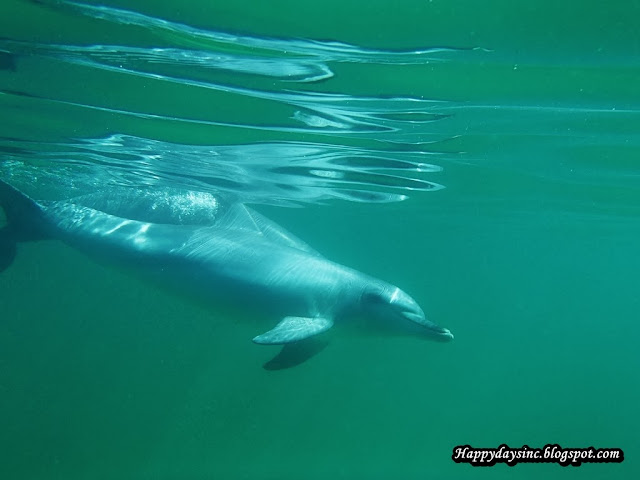 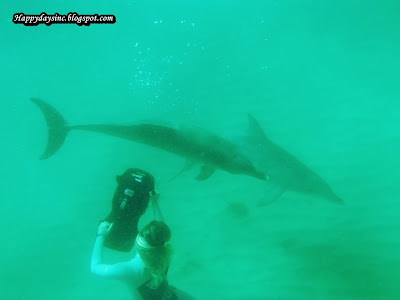 My Olympus Tough worked wonderfully in capturing photos of the agile graceful dolphins under and above the water and played a huge part in commemorating our Tough Mudder experience as well. 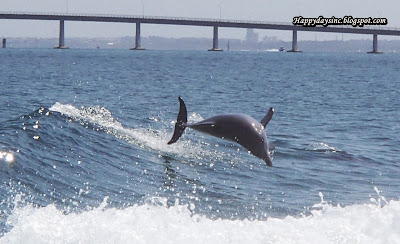 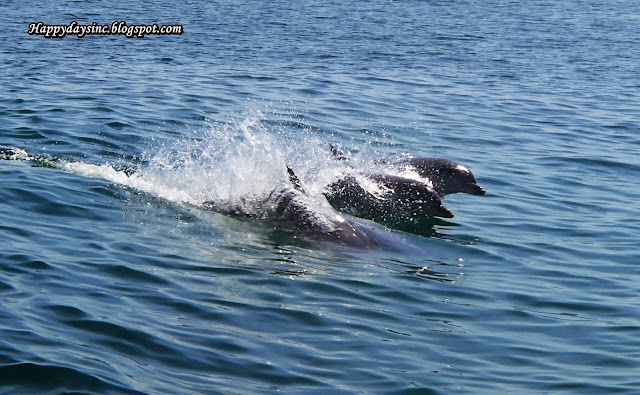 To draw in the dolphins, the boat would pick up in speed, creating waves and a slipstream for the dolphins to swim in and gain speed before putting on a show for us. Unlike the Maldivian spinner dolphins, these bottlenose dolphins are bigger in size and do not spin in mid-leap. However their movements are just as majestic to behold each time they break the surface. Again, these are wild animals and are not trained or fed to perform tricks for us so for us to witness them simply having fun in our presence was rewarding enough. 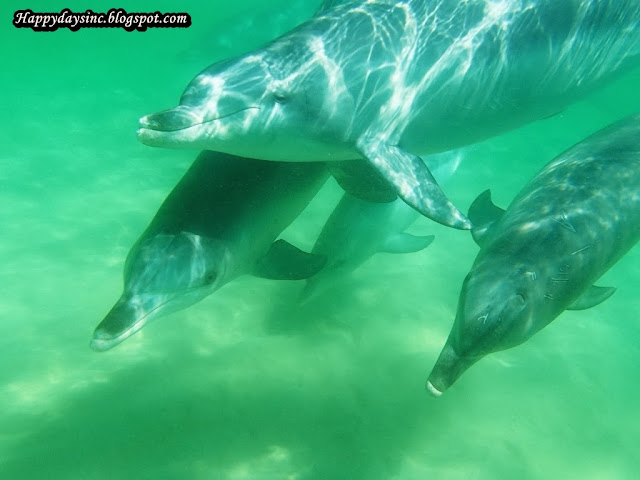 We spent a good two hours looking out for dolphins and joining them in the water before we stopped at a cove for lunch and to chill. We were even allowed a go at the aqua scooter in shallow waters. 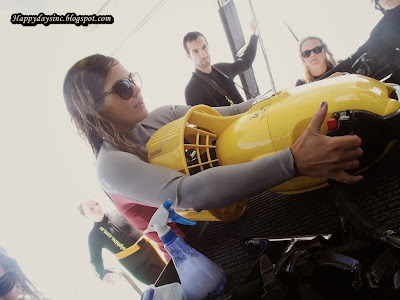 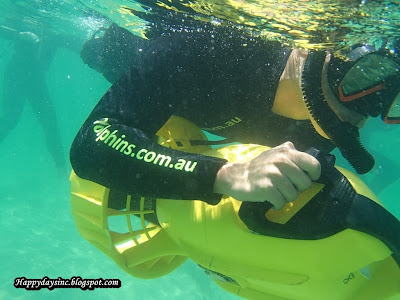 The entire experience was truly an eye-opener especially as how dolphins are loosing their homes to irresponsible fishing and growing ports and on top of that, are being taken into captivity under the notion of preservation and education. Being mammals, dolphins are sociable creatures and should not be confined to four glass walls. If you have watched the documentary film, Blackfish on orcas in captivity, you will understand what I mean. 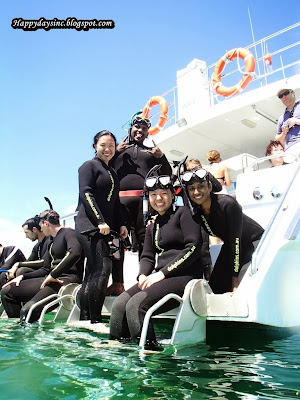 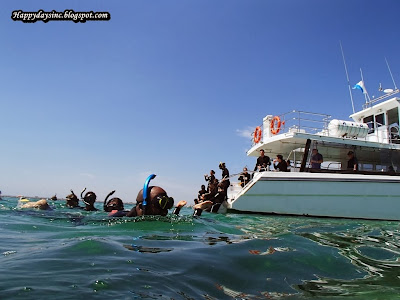 Rockingham Wild Encounter hopes to educate people on the wonders of these animals by allowing people close proximity to them for an once-in-a-lifetime experience that cannot be replicated in an aquarium. This is one experience that I will cherish forever, along with my sunset dolphin cruise in Maldives. 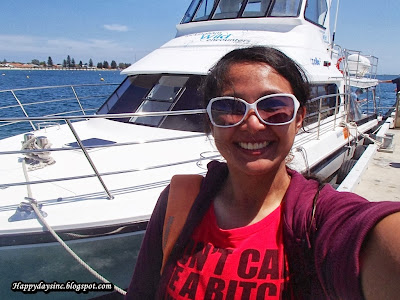 For more information on Rockingham Wild Encouters, check out www.dolphins.com.au and to read about more testimonials and updates, like www.facebook.com/rockinghamwildencounters. Besides swimming with dolphins, Rockingham Wild Encounters also offers a day out on Penguin Island and dolphin, penguin and sea lion cruise.

For more photos of my awesome dolphin adventure, check out my photo album here.

Read about:
My Tough Mudder experience: Tough Mudder Perth 2013
My dolphin experience: Swimming with Dolphins in Rockingham, Perth
Finding comfort in a budget airport: LCCT Premium Plaza Lounge
Where to get Sunnies for sunny Aussie: My Stylish Sunnies from Glassesonline
Posted by Tania at 5:55 PM

Hi Tania, good experience for you, maybe i should include into my itinerary during my next trip to Australia. Also, i saw similar program in Bali Lovina during my trip early this year, i am not sure if the one you encountered feel better:)

Hi, Simon
I think I know which Lovina program you are talking about. Is it the one where the dolphins are kept in a hotel pool? But yeah, swimming with wild dolphins is a must-do in Perth. I hope you do get to experience it as well.

Beautiful and marvelous. I was left stunned when I watched dolphins argyll. It was a very great thing to witness... those creatures in there natural habitat.

Yea, will include this activity on my visit to Australia next year:)