It has always been the global policy of Spartan Race that a Trifecta has to be earned within a calendar year (January to December). This is a policy and code honoured by all Trifecta holders around the world, regardless if they got it in Australia, America or Dubai. It was this policy that drove my team and I to dedicate an entire year of training and saving up just to travel to Australia in order to obtain my Trifecta. And I did. 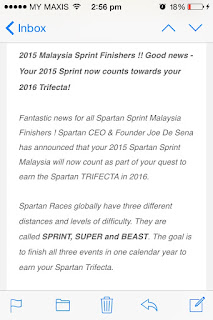 And then, Spartan Race Malaysia, just coming off the high of their inaugural Spartan Sprint KL on 10-11 October 2015, announced in an email that Spartan Race KL 2015 will count towards the 2016 Trifecta.

Spartans around the world say it with me....WHAT THE FUCK?

Understandably my team was livid. I was livid. Never have I heard of a country getting an exemption just because the people (these so-called Spartans) whined and complained on social media for Spartan Race to make them the exemption. 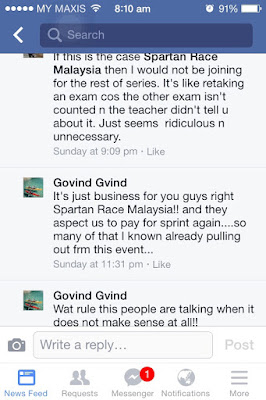 Yes, we Malaysians are a noisy bunch on social media. It was this 'united' front that drove a major marathon organiser to change their race date back to the original date after it was changed for a politically driven motive. But that incident was for a good cause to unite for. 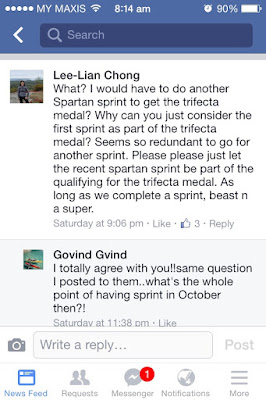 Asking Spartan to make the KL event an exemption just so Malaysians can get their Trifecta is not a good cause. It's everything against the Spartan global policy and more so against the unspoken code of Spartan finishers.

Spartans do not complain or whine. They spartan up.

However, there has to be something about Malaysians whining for the exemption because lo and behold, the announcement was made. Good job, Malaysia. Your relentless begging broke Joe De Sena and even made him turn his back on his own company policy that has been honoured by Trifecta holders worldwide. Let me applause your influence. Now use to it to change the government. 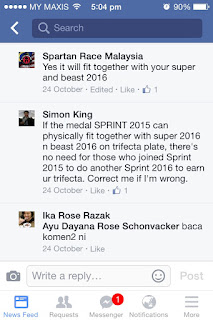 Spartan making an exemption for one event in one country that so happens to have millions of keyboard warriors, showed a weakness on their part that is very unspartan-like. More than anything, it comes off as a selfish, profit-making decision aimed at driving more sign-ups for the upcoming Spartan Super in March. 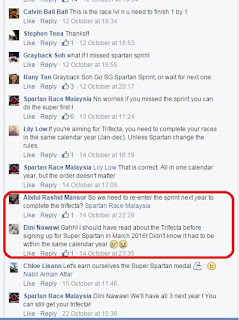 So basically the message I am getting is...if Malaysians want something, all they need to do is whine and make noise and they will get it. Way to reward these Spartans for unspartan-like behaviour, Spartan organisers. What next? since Malaysians do love their food and the Reebok One Challenge did provide a post -race buffet, Spartan Race should do that too since they are in the business of pandering to their market, right?

To put it in lame man terms: You've studied your arse off for a worldwide exam only to find that the examiners have lowered the marking grades for your country. This means your classmates who did nothing but party the night away is going to get the same grades as you. Now that's not fair right...Actually, that sounds much like Malaysia's education system. Go figure.

Now, the odds of Joe de Senile reversing the decision is nonexistent so I am just going to spartan up and deal with it even if it means that 10,000 Malaysians would have their Trifectas next year with just a Super and Beast.

I am just voicing the opinion of a hard-earned Trifecta holder who trained hard for her races, saved up, planned ahead and did all her 30 burpee penalty where needed. All within in a calendar year as per the original Spartan Race policy. I am just glad my Trifecta was earned in Australia. #justsaying.
Posted by Tania at 5:45 PM