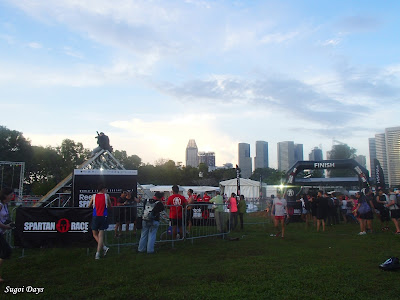 Some initial impressions based on prior obstacle races I've done in Singapore: Singapore is too urban and clean for it to be a Spartan Race experience like Australia and at the same time, have a lot of rules to abide by when it comes to cleanliness. I figured these factors would affect the race setup and indeed it did.


Spartan Race Singapore was located within a 5 minute walking distance from Nicoll Highway station and close to Bugis. For me, it was a 5 minutes walk from my accommodation at 5Footway Inn Project Bugis. 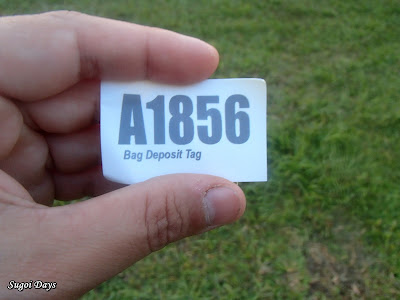 Anyway, I arrived at the race village an hour and a half before my race wave to collect my race kit and for the first time ever, I have a Spartan racing vest. Even Australia and Malaysia didn't have that! Timing chip and headband were also given in the race kit along with a few vouchers from sponsors. Because I was early, bag drop was fast and easy but instead of giving me a bag tag wrist band, a paper tab with the bag number was given instead. If I didn't have my arm band with me, I wouldn't know where to keep the tab. 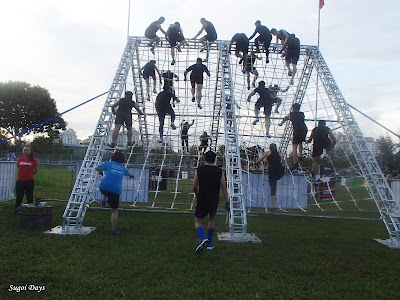 I flagged off at 730am with my teammates and we used the first kilometer of running to warm up before we hit our first obstacle which were the over and under- walls. The net crawl which went over the entry to the start line area was next and despite a minor backlog, we did it pretty fast. We then crawled under barbwires on grass followed by more short walls. 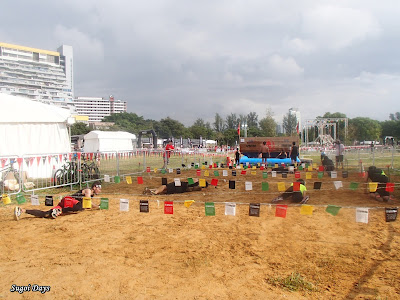 Yes, there were a lot of walls at this Spartan.

Another kilometer or so of running along the river led us to....yup, two more walls. Our first water stop was here and we drank our share of isotonic drink, plain water and coconut water. And we were off once again on a 1.5km run. 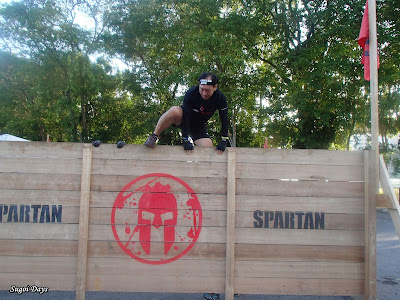 It was very humid and sunny that morning and running along the path beside the river was a bit monotonous but I'll give them this. The scenery was beautiful especially when the city skylines and Marina Bay Sands came into view. 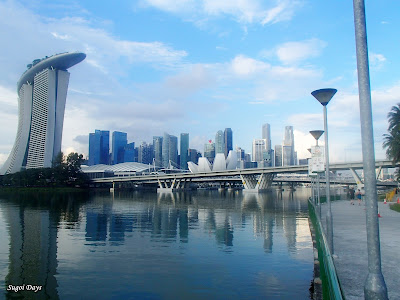 The monotony of running on flats made me miss the stairs run at Spartan Stadium in Sydney and I wished that section of the Float could have been part of the obstacle but sadly, it was not. We were led to the fringe of the Float where the sandbag carry was up.

Women had to carry 20lbs while the men carried 40lbs. My friend convinced me to do the men's weight as a challenge and I was glad I did because it wasn't at all that heavy. We did our lap with the sandbag and we were on our way to the next obstacle - the multiple monkey-bar - rings - ropes challenge. 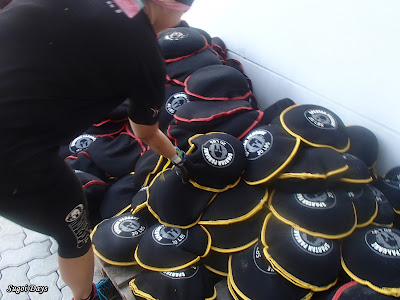 This was where we as a team incurred our first round of 30 burpee penalty. With a mix of swing horizontal bars, dangling rings, a rope, a handball grip and more rings, one had to swing their way across the obstacle to ring the bell across. It was an obstacle that many failed. I must say the volunteers were encouraging at this obstacle but as for monitoring proper burpee form, not so much. There was a dude beside me who did normal burpees (without pushup or chest to ground) as oppose to the proper Spartan chest to ground burpees. 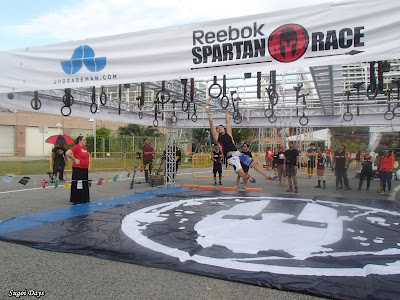 The weight for the women at the Herculean Hoist was light compared to what we had in Australia so I did the female's weight and then tried out the men's weight. At the risk of bruising a few egos here, both weights were easy, perhaps to better accommodate the Asian built. 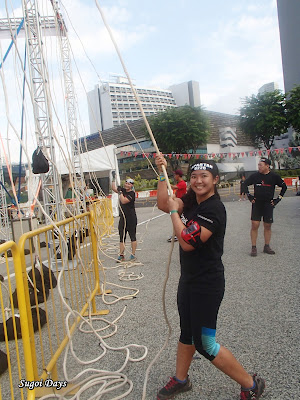 At this point, it was a U-turn back the way we came and thus, another 1.5km run followed. We were led back to the obstacle area where the bucket brigade challenge awaited. This was a first for me as we had to fill up our respective buckets to the indicated marks and walk along a winding path with it. Gripping it proved to be challenge because we were not allowed to put the bucket our shoulders. 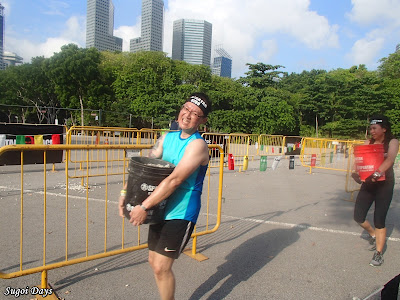 More walls came up and were conquered with the ease of a team used to helping each other out before our progress was halted by the spear throw. It was here that my consecutive spear throwing streak from Australia was broken as my throw lacked the power to even reach the target. So down I went into my 30 burpees. 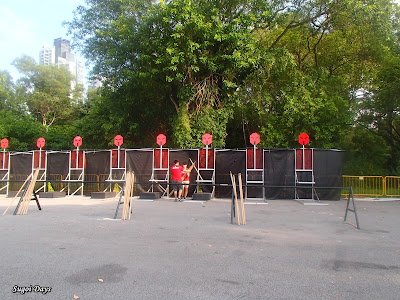 Tyre flips were next. Men had to flip the tyre four times forward and four times back to the start while women only did two. Once again, my friend and I did the men's version, leaving the volunteer baffled. 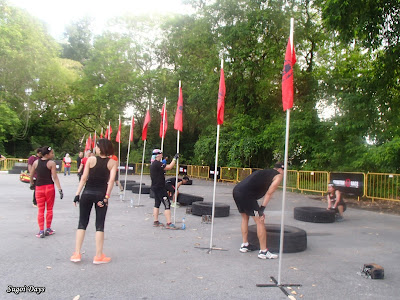 The wall traverse came close and this version had turnings and corners to navigate in order to reach the bell. I failed the Australian version multiple times but here, I did it slow and steady. At one point, the volunteer started to cheer me on but I shushed him for better concentration. Poor guy. He probably thought I was a bitch. Well... 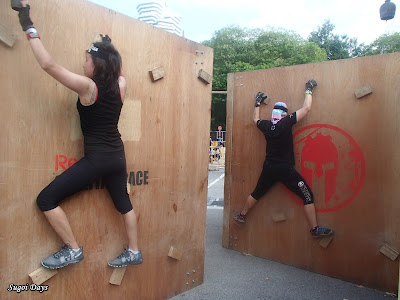 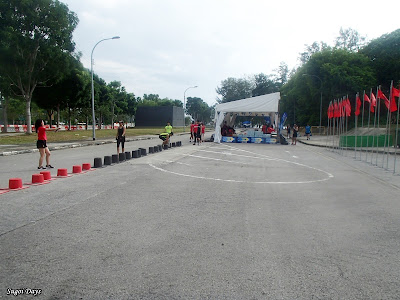 The end was near at this point and I remembered the cluster of obstacles that awaited us. There was one more barbwire rolls followed by a waddle into a pool. This of course, lead up to the rope climb.With wet hands, this was no easy feat but not impossible as long as one had proper technique and grip strength. I got up there, rang the bell and came back down. 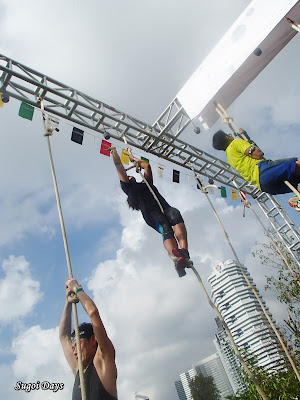 We waited for two teammates to crank out their burpees at this station and finally it was the last stretch! More barbwire crawling and a slippery slope obstacle with ropes to assist. Easy. 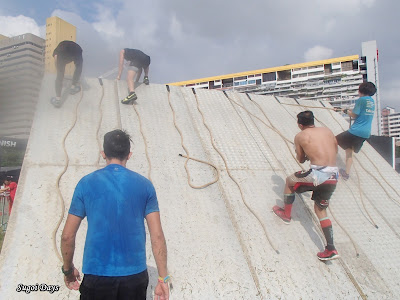 On the other side, the iconic fire jump awaited. As a team, we leapt over the fire and officially completed Singapore's first ever Spartan Race. 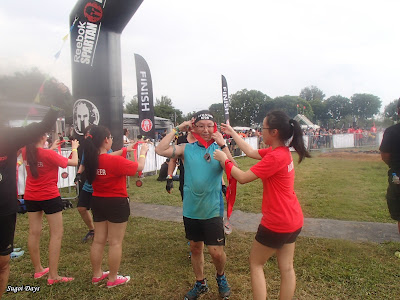 Compared to the Australian Spartan, Spartan Race Singapore was easier due to its flat, clean and trail-less terrains. I felt that all but two of the obstacles (monkey bars and spear throws) were dumb down to cater to the local market, especially the weighted ones.

Water stops were plentiful along the 6+km route and participants had the choice of Lucozade isotonic, Vita Coco coconut water, mineral water from Fitness First. A cold can of Desker beer waited at the finish line. Hats off to the volunteers and medics on duty for their tireless encouragement and attention to the racers.

Spartan Sprint in Singapore was a good introduction to the race for beginners and those who just started out obstacle racing. It's easy, flat and as long as you have a solid team at your side, do-able. Oh and did I mention, extreme clean? 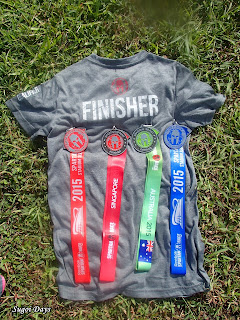 I hope the next Spartan Race there will be held at the stadium. I did find myself missing some stairs after all that flat running. Maybe running on flat grounds was an obstacle on its own...Anyway, the next Spartan dates in South East Asia are: