Race day. The D-Day. The Tokyo Marathon. My second marathon and first Abbott World Major. Perhaps my only World Major. 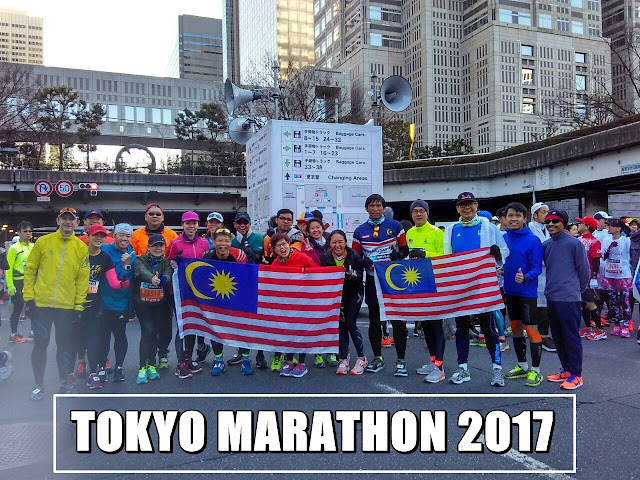 One of the perks of racing in Japan was the flag off time at 9:10am unlike Malaysia's ungodly hours to beat the heat. This meant I could sleep a little. But my internal body clock had me blinking awake at 6am. I got dressed, did some last minute check of my running gears and by 7am was out the door. 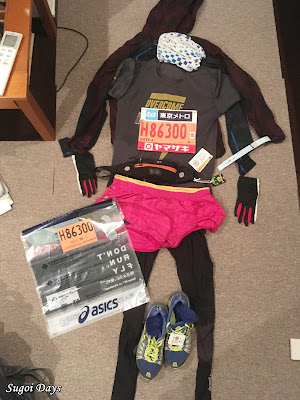 Although I had checked out the start line two days earlier, Shinjuku Station was known for getting even the most seasoned Japanese lost in it. And lost I would have been had it not been for the many volunteers and signatures to show the way to each respective entry gate. 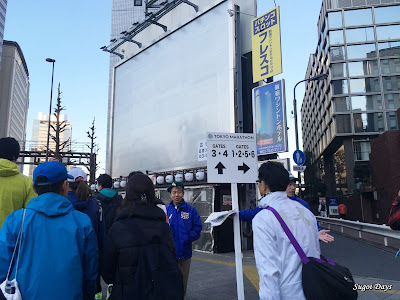 I was at Gate 4 and upon reaching, guzzled down the rest of my Pocari Sweat and eat half of my sweet potato before heading through security and bag check. Unlike the Kyoto Marathon, water bottles were supposedly not permitted but I saw plenty of runners carrying them during the run anyway. Hm, should have just stuck to my original running practice and brought my bottles of electrolytes. 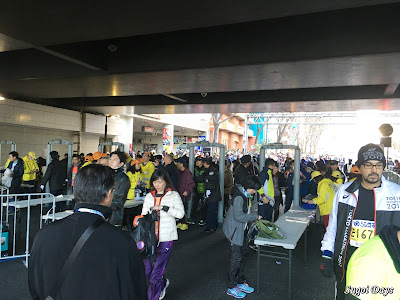 I quickly met up with the Malaysian running gang for some commemorative photo-taking before dumping my bag at my assigned truck. That took less than a minute and I quickly headed to my assigned corral (Corral H) with a fellow Malaysian runner, Patricia. We chatted while waiting for our flag off (a hour's wait in the cold) and passed the time looking at other people's shoes, outfits and bags. 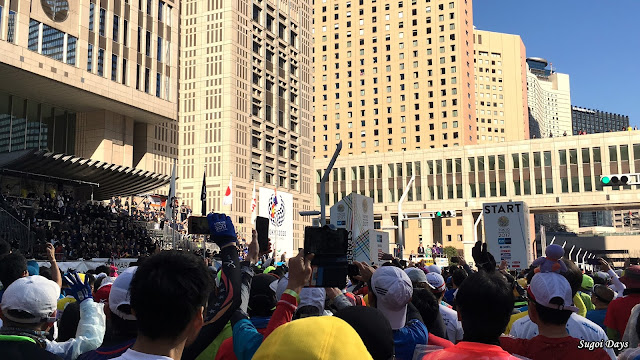 Then came 9:10am and off we went...about 11 minutes later. The flag off was a grand affair with confetti and a marching band in front of the Tokyo Government Metropolitan Building. Pat and I bid our farewells as soon as we crossed the start and I started my watch to track my pace. 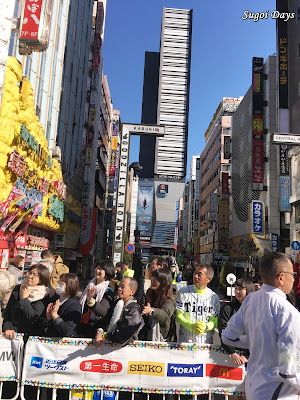 People often shared that the first 10km was crowded and despite the gradual downhill course, was tricky to maneuver. It was true. Finding my usual pace was difficult as it quickly became a game of speed up, dodge runners, slow down to side-step someone and repeat. 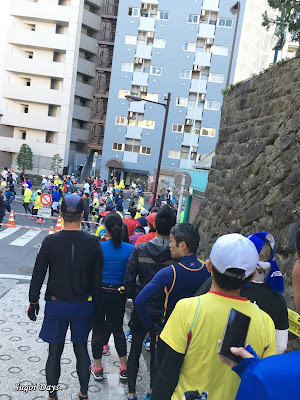 To make matters worst, my Pocari Sweat started tickling me in the bladder and at 4km, I made the mistake of stopping for a toilet break so early in the race. That ate up 8-10 minutes of my race time and when I rejoined the race, I made mistake 2 of trying to make up for lost time by going faster for the next 6km. 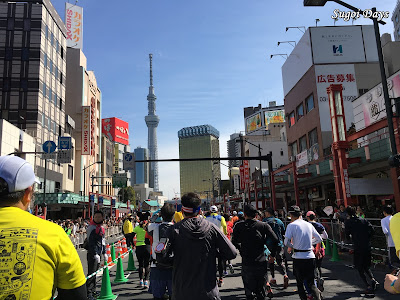 The cooling weather was ideal to run in but also incredibly deceiving. I felt good, maybe too good and that fueled my going faster. 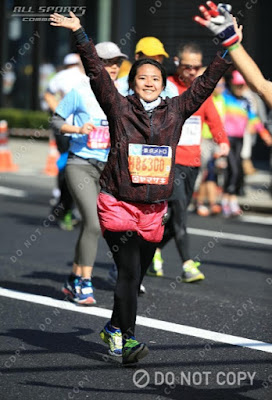 Without realising it, I was drinking more, thinking that it was due to the sun in my face and its heat beating down on me. I had forgotten to apply sunblock and for the next few days, it showed. 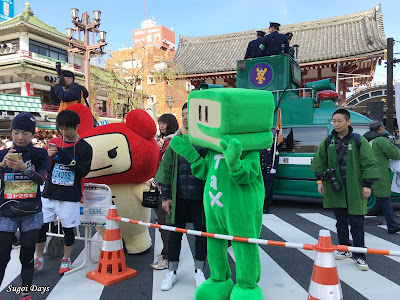 There were ample water and food stations every 2km or so with ever ready volunteers and crews to cheer us on. My only complain was that there were no signs indicating how many stations, which one was the last and which were the water, isotonic liquid and food stations. The Kyoto Marathon had this and it made the distribution so much easier. At Tokyo however, it resulted in everyone zeroing in on the first table with water available, scrambling for a cup. 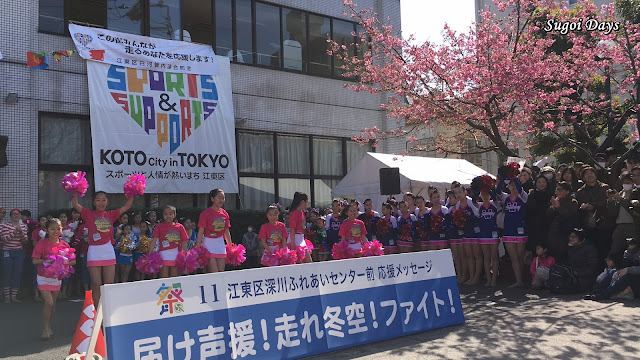 Then at the 10km, I felt the months old pain set in my right hip. Oh, dear. I knew it would be back but not so soon. To cap it off, I was experiencing sharp back and knee pains occasionally throughout the entire run and knew, with a crushing feeling that a personal best was out of my reach. 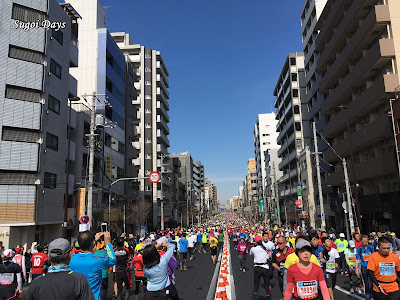 Yes, the Tokyo Marathon route was much flatter than the Kyoto Marathon but with my growing bout of pains and the GPS on my watch going haywire (an issue many racers faced due to the buildings), my only goal in the last 21km was to just finish it. 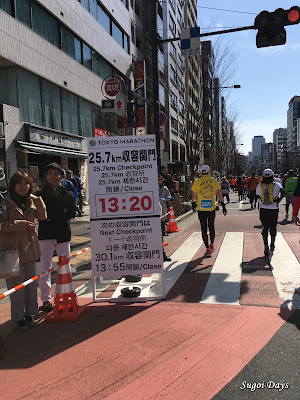 And what a challenge that was. Despite the occasional Tokyo landmarks like Asakusa and the Tokyo Skytree, Tokyo Marathon lacked the natural and historical charm the Kyoto Marathon offered. I knew this going into the race but never realised how much it would affect me mentally. 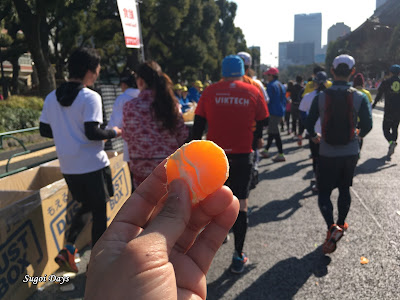 I grew tired of seeing buildings and shut down mentally at the 28km mark. The in and out, U-turn route made it even more challenging because it was then you could see the sweeper bus closing in. 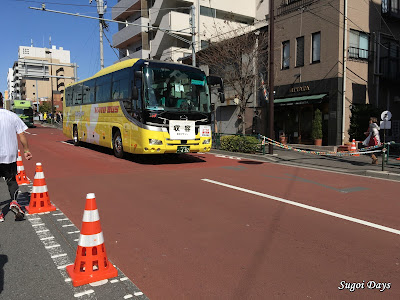 At 30km, it became a mental game. Just 12km, I kept telling myself. It became the longest 12km I've run. I began to question why wasn't my mileage reducing. "Where was the U-turn? Where were the pacers? When will this end?"

I had face-planted into what everyone called the Wall. 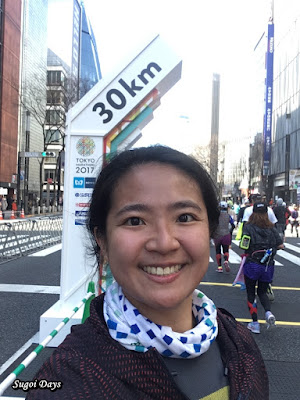 The last kilometer along the shopping street of Marunouchi to Tokyo Station was a mixed of torture and bliss because my legs were hurting so much and also because I was almost done. 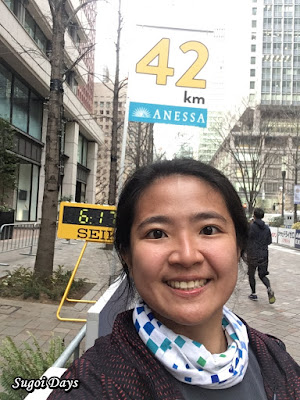 The finish line beckoned with the Tokyo Station behind me and I sprinted (or crawled, I can't remember). 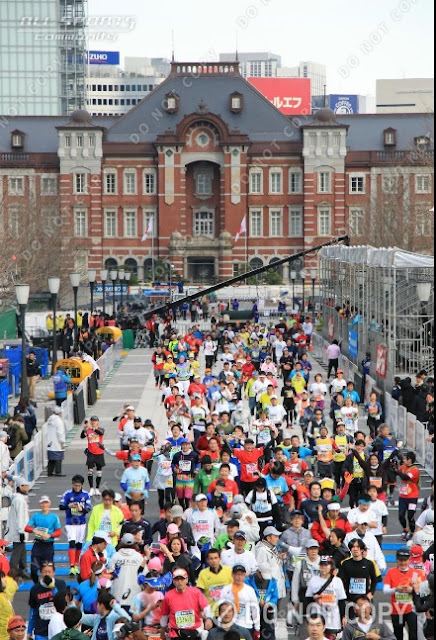 I had finished with a timing of 6:18. My watch showed a distance of 44km but I attributed that to the zig-zagging and GPS going crazy. The walk to collect my finisher medal and towel and to the bag drop and changing room added another 2km to my already tired legs.

Like why you do tis to us, Tokyo Marathon organisers?? 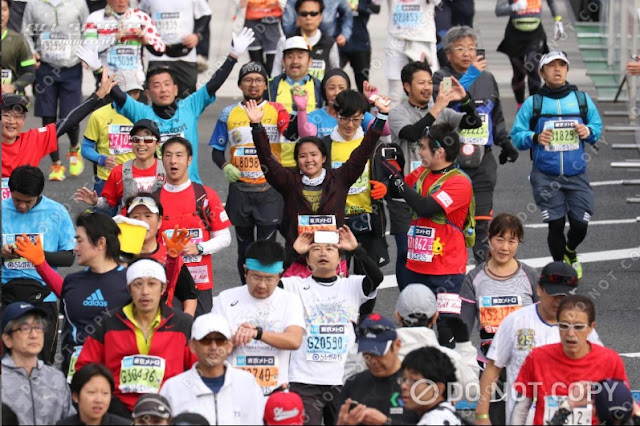 All in all, the race was well-organised except for the water station signs and very well received. Perhaps a little too well received with 33,000 participants just for the marathon! 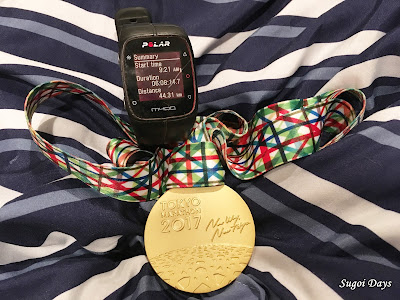 Looking back at my performance, I dare say I am not happy at all given that I did do a sub-six hours for my first marathon that had crazy hills towards the end. If it wasn't for the 7 hours cut off time instead of 6 hours, I would have gone home empty handed. 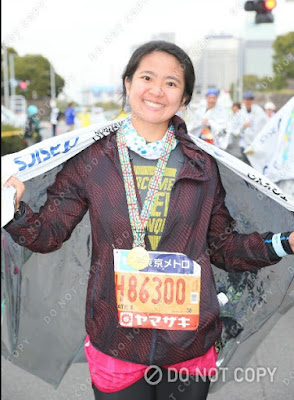 Would I join this race again? Yes to redeem myself but for the rest of 2017, my priority would be to let my body recover from the abuse I've placed it through. So that I can run again at my best condition. No hip pain, no knee pain, no injuries, no excuses. 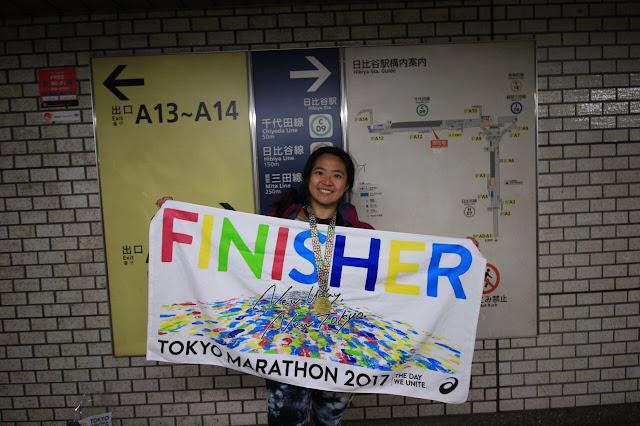 Tokyo Marathon, I'll be seeing you again.
Posted by Tania at 6:13 PM