Turkey. Japan. Morocco. Heck even Singapore - All of these travel destinations are known for having some of the most picturesque locations ever to grace Instagram. Which is a shame because Kuala Lumpur too has its fair of stunning locations (that isn't the Batu Caves, KL Tower, Twin Towers and Dataran Merdeka) - they just haven't been discovered. 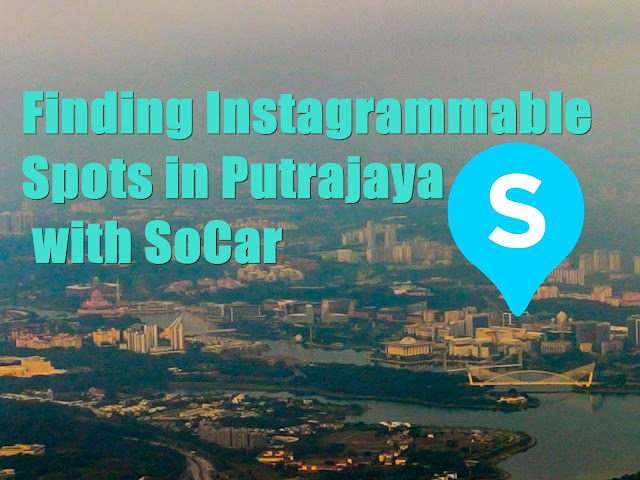 So together my Volkswagen Polo from Socar, let me take you on a drive to one of Kuala Lumpur's hidden gems when it comes to Instagrammable spots - Putrajaya. You must be thinking, "Eh Putrajaya? Isn't it just government buildings? Got things to see meh?" Well, wonder no more because here is my list of 5 Instagrammable spots in Putrajaya (and all within driving distance of each other)

1. Astaka Morocco, Taman Botani Putrajaya
I am in Morocco! Actually no, I am not because this was taken at Astaka Morocco as known as the Moroccan Pavilion, located near the car park to the Taman Botani Putrajaya (Putrajaya Botanical Garden) This place is fairly popular for wedding shots and graduation photos and it wasn't hard to see why. The design of pavilion takes inspiration from palaces in Morocco and was built as part of a cultural exchange between Malaysia and Morocco. 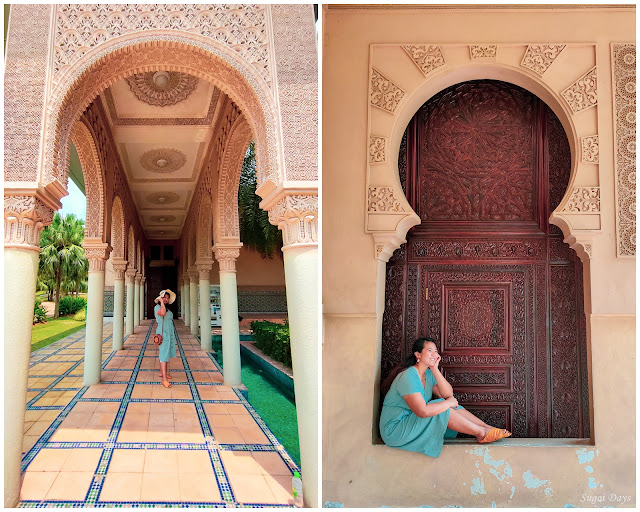 While the outer area is free to shoot and explore, the real gem is really the inner pavilion which costs only RM3 to enter. Not only is the interior beautiful to see, there are also useful information about the different types of room designs and its usage in Moroccan history. Do take note though that photography is not allowed in this area.

2. Bougainvillea Tunnel, Taman Botani Putrajaya
Dress comfortably with sneaker or flats if you're planning to look for the Bougainvillea tunnel inside the Taman Botani Putrajaya because the park is huge with slopes and stairs. But once you find the tunnel, it's worth it. Admittedly when we got there, only a few bougainvilleas were blooming on the outer side of the tunnel but surprisingly the inside of the tunnel was a serene green corridor with swings and pebble steps. 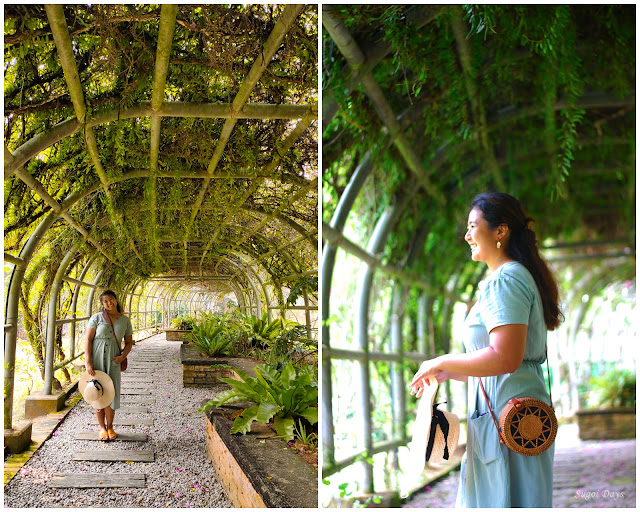 As the location is relatively unexplored and shaded, snapping photos there was a rather chilled experience. I am sure the kakak and gardener there were also entertained by two girls playing around with their phones and cameras.

3. Putra Mosque
Turkey has the blue mosque, Putrajaya has a pink mosque. Putra Mosque is a popular tour spot and day trippers but as it's still a place of worship, there are certain hours and dress codes to abide to. Fret not though as maroon robes are provided by the mosque free of charge for visitors. All that they ask is that you be quiet and respectful. 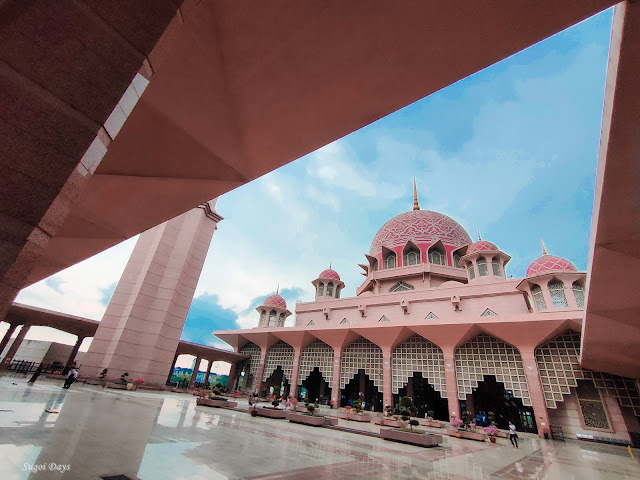 However as I was there after a downpour, visitors were not permitted to enter the inner courtyard as it could be slippery. Only worshipers were allowed to enter. But I heard the inside dome was just as beautiful to see in person so I guess another trip to Putrajaya is warranted. Funny story, we actually got to the mosque at 4pm but because it started to rain, the mosque was closed and we were asked to leave. Thankfully, we were able to drive ourselves to the nearby Alamanda Shopping Mall for a break and come back an hour later. I would hate to think how stranded we would have been if we didn't have the rented car from Socar. 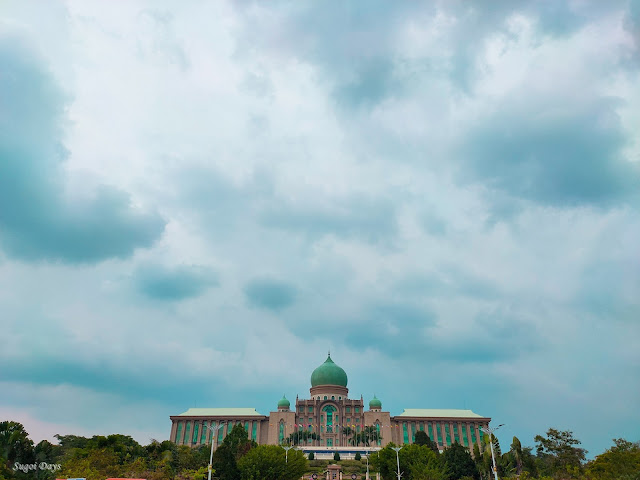 Wait what? How can the prime minister's office be instagrammable? In Putrajaya, it can from the outside. You however are not allowed to go into the office but the main entrance makes for a pretty impressive picture, showing off the design and girth of the building. 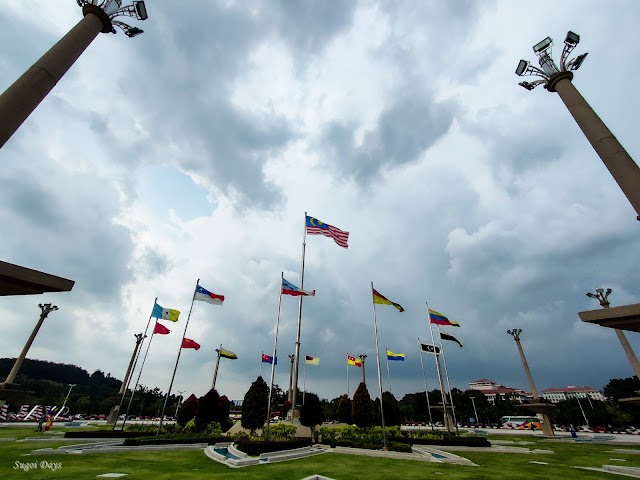 Due to the high traffic of cars and buses in the area, do be careful when trying to snap a photo there as most people do. And while you're at it, try and see if you can snap a picture of all 14 state flags dancing majestically in the wind with Jalur Gemilang.

5. Putra Bridge
At 435m, the Putra Bridge is the longest bridge in Putrajaya and also a popular location for photo-taking. The bridge connect Precinct 1 and Precinct 2 and leads into the main street. There were plans for a monorail system to run beneath the bridge making it a dual purpose bridge but those plans has been put on hold. 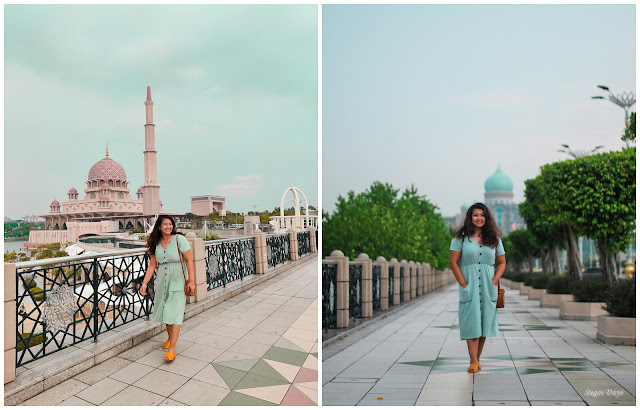 Inspired by the design of the Khaju Bridge in Iran, the Putra Bridge makes for a beautiful background and offers grand views of Putra Mosque and Perdana Putra at the other end. I hear the sunset view are stunning there as well. 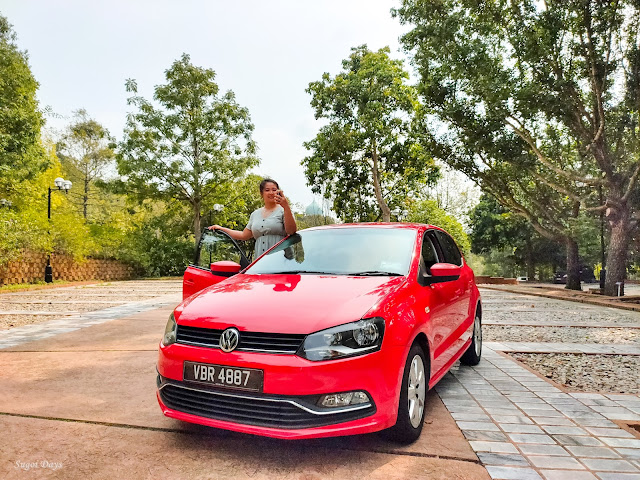 After downloading the Socar app, you first need to get your driving license verified which can be done in app. Just snap a photo of your license via the app and it can be verified within 4 hours. After that, you can pick any car you fancy that is within your vicinity, schedule when to pick it up and for how long and once you've paid, your reservation is ready and waiting! 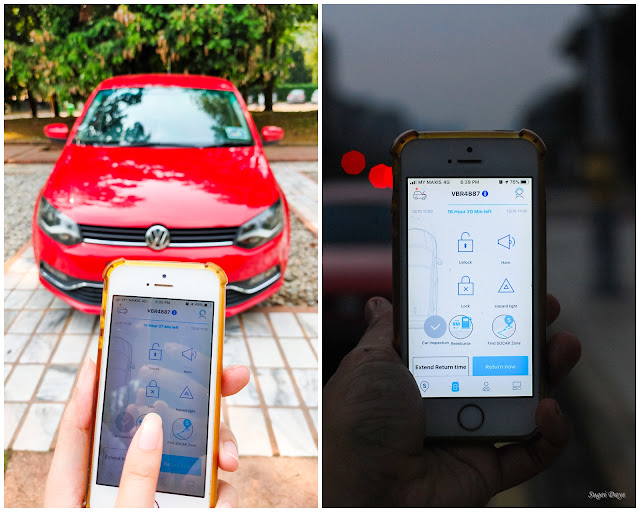 When you get to your selected car, just use the smart key function on the Socar app to unlock your car and you're good to go as everything has been made digital and automatic. You don't even need a physical key to start your car, lessening the hassle of misplacing the key although it does mean you need keep your phone constantly charged to lock and unlock your ride. 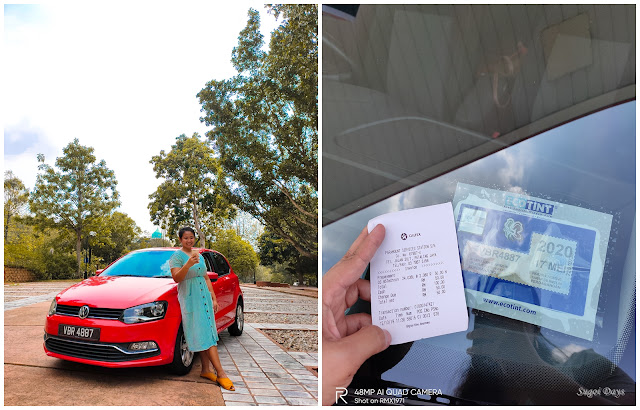 The price includes petrol and should you be required to refill the tank, just do so, snap a photo of the receipt with the road tax and submit it for reimbursement via the Socar app. That usually takes about two weeks upon returning the car and will be banked back into your account. Should you have any issues, the app has a SOS button as well. 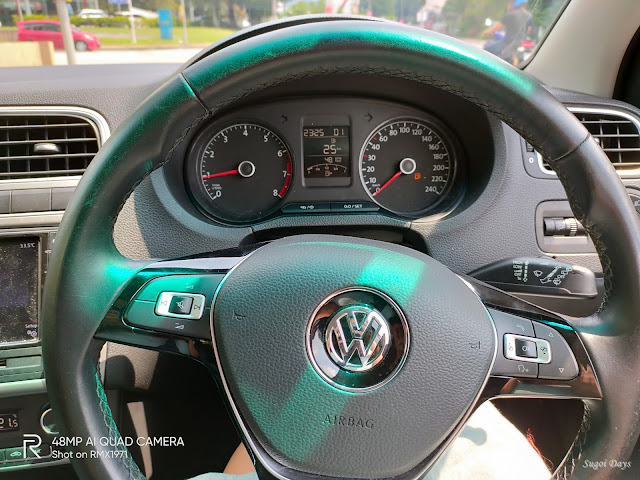 Before returning it as its designated parking space, be sure to tidy it out and return it clean for the next person. According to Socar, they have found strawberries, kuih raya and even underwears in their cars which is quite gross. So basically, be considerate of the driver after you and leave it as clean as you can. 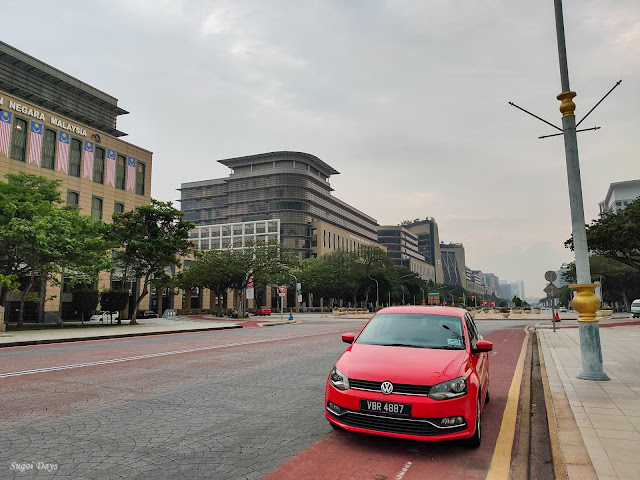 Socar is pretty convenient if you're in need of a ride for whatever reason and prefer being behind the wheel quite literally especially if you're going to those hard-to-reach places like Putrajaya. Or if you just want to live out your fantasy of driving your dream car. Unlike rental car companies, Socar lets you book your car by the hour, days or months, allowing the flexibility of picking a car of your preference. Currently Socar serves four major cities in Malaysia: KL, PJ, Penang and Johor and is looking to expand into areas that are under-served and not well connected. 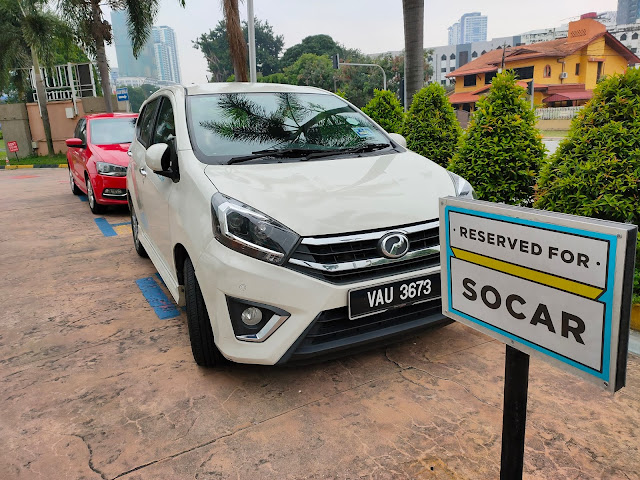 I am definitely looking forward to using Socar when travelling around Malaysia or even just to get to the airport thanks to their one way rental option. Being able to drive a Volkswagen Polo was just so fun and this was only made possible thanks to Socar. For more information on SOCAR and to register as a member, please visit https://socar.my/
Posted by Tania at 10:39 PM

Thankyou for this blog its really interesting and informative, but there is some errors
Which need to be recorrect by owner. See i also have some good blogs related to
Technical services, you can check on my website.