Today I am going to talk/educate/nag/rant about the many pet peeves I have seen, heard and encountered before, during and after a running race. Disclaimer: This is by no means just my opinion alone but a compilation of opinions that I got from fellow runners, off and on the Internet.

1. Selfies/Camwhoring
Yes, I get that this run is your first....or tenth. Yes, I get that the view and buildings are nice. Yes, I get that you just need to take a photo with your besties to commemorate this moment at the start line. But you are also the reason why the Hong Kong Marathon organisers has issued a ban on runners from taking selfies at a race (source)

"The restriction is a result of a runner pile-up during last year’s event when a woman stopped at the beginning of the race to take a picture of herself, which triggered a domino-like effect as other participants crashed into her" according to the report. That could happen to you, cam-whorers and worst, others will be hurt because you couldn't stop to think to just step off the road first and out of the way of runners. Shame on you.

If commemorating the moment is just that important, start the run from the back. It'll probably take you 5 to 15 minutes to reach the start line after the gun goes off but that's plenty of time to do your selfies and be far away from the gungho runners. I did that at the Reebok One Challenge and remained behind the main horde of runners the whole way just so my friends and I could take photos without disturbing other runners.

Otherwise, please quit before I start pitching the 'Stop shooting yourself or I will. With a shotgun' campaign.

2. Holding hands while running
While the notion is romantic (in your head), the act of holding hands with your boyfriend/girlfriend or friends has only resulted in a human blockage chain for other runners. Think about the other runners. Place yourself in their stinky shoes.

Imagine that you are about to complete a grueling marathon and have only 500 meters to go and in front of you is a lovey-dovey couple from the 10km category, pulling each other along and they just won't move your way. You are exhausted mentally and physically and if you really admit it, a bit mentally unhinged at this point. If someone (not me) handed you a chain saw then, you would hack your way through those clenched hands to get to the finish line.

If you want to hold hands with your loved one and make doe eyes at each other then do it in a park. Or in a Bollywood movie.

But not at a race with 100,000 other couples and people. Because if every couple held hands during a race, it won't be a race. It will be a moving human blockage of crap.  So don't be that couple that clings on to each other and 'draws strength and motivation from each other.'

You want to run, you run and your faster half goes ahead. That's why it is a race. Besides, if you truly love someone, you have to let them go and if they come back to you (at the finish line preferably), they are yours to keep.

But if you keep holding hands...don't blame me if a crazed runner with a chain saw hacks you up one day. Someone is bound to snap. Just saying.

3. Blasting your music
It's cute that you think everyone shares the same interest as you and wants to run and listen to Justin Bieber or the latest fad of KPop bands belt out songs in a language that even you don't understand.


Running is a really one man-show and can get quite lonely at times especially on the long stretches. Music is a good motivation and helps maintain concentration for some. But blasting your music for everyone to hear is just not cool. An auntie won't want to hear Bieber's Baby as much as you won't want to hear the Beetles coming from her. If you even know who that is.

In this case, sharing is not caring. Sharing your music at a run makes people want to trip you and hurt you. Bad.

4. Running in the wrong category
If you are slow and supposed to be in the slower category, why are you in the sprint category? Is it an ego thing? Or is it because someone you know is running in that category and simply must run with them? Or are you just lost and confused? Because if it's the latter, runners can forgive that. After some booing and shaming, of course. I am just joking....I hope. 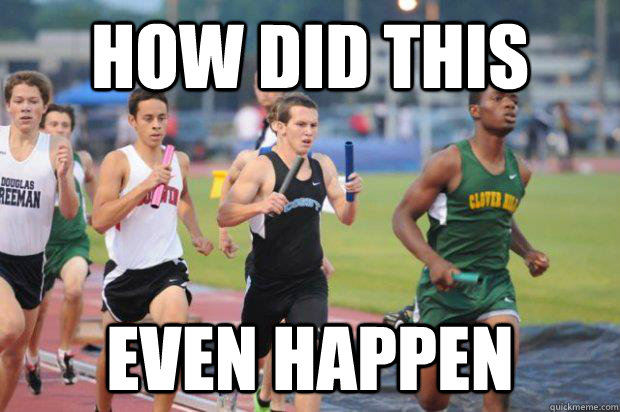 5. Bringing a bag and making your boyfriend hold said bag.
Okay, I will confess now. This is my personal pet peeve but I am very sure it has irked others too! Run with a bag if your belongings are all that important to you, fine. But making your significant other hold it and run with it, now that's just laziness and uselessness on your end, girls. Even outside of runs, this irritates me. If you love your boyfriend, don't make him the object of mockery by making him carry your big-ass Hello Kitty LV edition bag.


Most runs have baggage drops so use them. Or if you simply cannot run without your phone, 200 liter tumbler, camera and mirror, either use a pouch/ fanny-pack OR just don't run at all.

6. Slow runners hogging the start line.
If you are not going for a podium finish, stand in the middle or at the back. The people who need to be at the starting line are those who have a running career and have been training for it for months. Don't crush their dreams just so you can appear in the photos by the official photographers or worst still, take a selfie at the start!

These people are gunners even in the marathon category and they will hit the ground hard and running. If you get in their way, they will just hit you hard and keep running. Like the bull runs in Spain. It's not like you can catch them anyway.


8. Dressing inappropriately
Oh my god. Men, women, ladies and gentlemen. What you wear for a run do matter but for practicality and comfort sake! Not just for you but for others around you too.

I did a 12KM run recently and this girl with the roundest butt kept insisting on overtaking me and running ahead of me. I couldn't help but notice because she was wearing a pink neon boy-cut underwear. I can't even say shorts because they only mostly covered her butt and were, even then, riding up. I wanted to gouge my eyes out.
All I could do was maintain my pace while she kept over-taking and slowing down (during which I over-took her) before I sped up on a slope and finally lost her for good. Thank god.

Again, what you wear is important but not your undies please!

9. Impatient and crude drivers
At the recent Standard Chartered Run,  I heard complaints from the marathoners that they got honked and yelled at by impatient drivers forced to wait at road blocks. First of all, do you have any idea how demotivating it is for these tired exhausted runners to have people jeer at them? Secondly, if you didn't know there was a massive run despite the many news reports, online and offline for months now or you knew and didn't bother to plan a detour, then you deserve to be stuck at a road block.

It is bad enough that your car is left sprouting smoke and fumes that the runners breathe in heavily while you sprout insults and inconsiderate comments. Like I said earlier, one of these days, a runner is going to snap and you will be running from a chainsaw maniac. And the chances are...you can't outrun them.


Much like the inappropriately-dressed runner, you are a distraction to other runners because they cannot help but envision the disgusting sweat dripping down your locks as you fling it left and right in attempt to mimic a shampoo ad (at a run? Seriously?). Don't you know that some runners (not me) have also imagined bringing a lighter and setting your hair ablaze? Or just snipping it off as you run along. You probably won't even realize it until after the race.

So just tie, plait or braid it for the sake of others and your hair.

If you are offended by this post in any way, it probably means you are guilty of one out of these ten peeves. Do something about it and don't be a peeve.

Got more runner's pet peeves nagging at you? Share them and I might do part 2 if I have enough.
Posted by Tania at 10:30 AM

regarding navigation, I should say that it isn't the great. unlike the Roomba 870 that is right for excessive traffic rooms, the 650 had hassle in navigation. but, with lesser traffic, it turned into able to navigate smoothly, cleaning all of the places with no trouble. visit the site