After two days in Kobe, I was ready to move on to the second leg of my trip which was Kyoto. I was glad to be going back to Kyoto because during my first trip there, I barely scratched the surface of what the ancient city had to offer. There was only so much one could do in half a day and having learn that lesson, I allocated three nights to Kyoto this time. 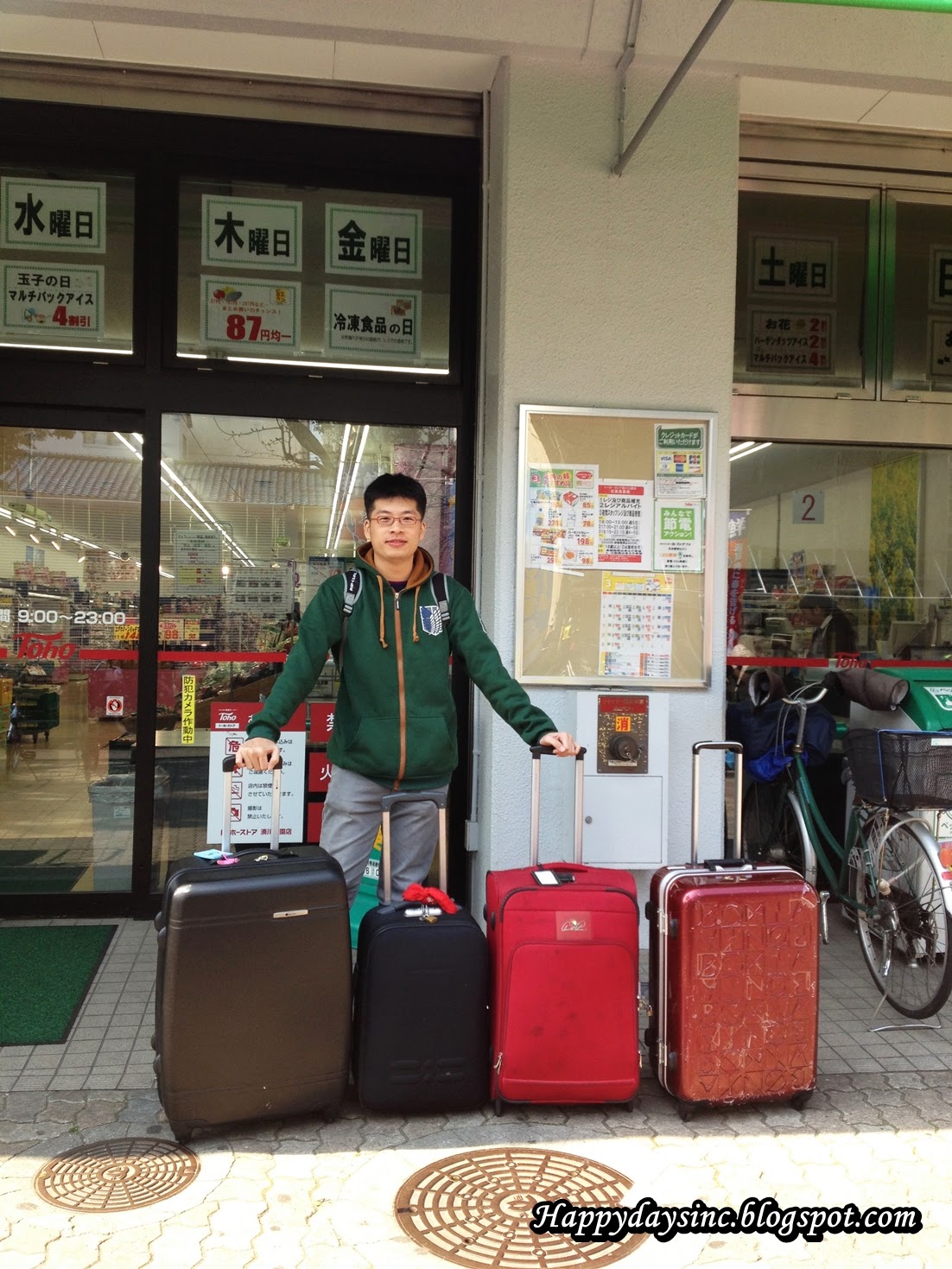 We left Kobe in the morning via the the Hankyu Kobe line from Sannomiya and disembarked at Juso station to transfer to the Hankyu Kyoto line that took us to the center of Kyoto. After one more train transfer, we arrived at the main Kyoto station and walked about five minutes to our Kyoto accommodation,  Hana Hostel Hybrid Inn. (Review here) 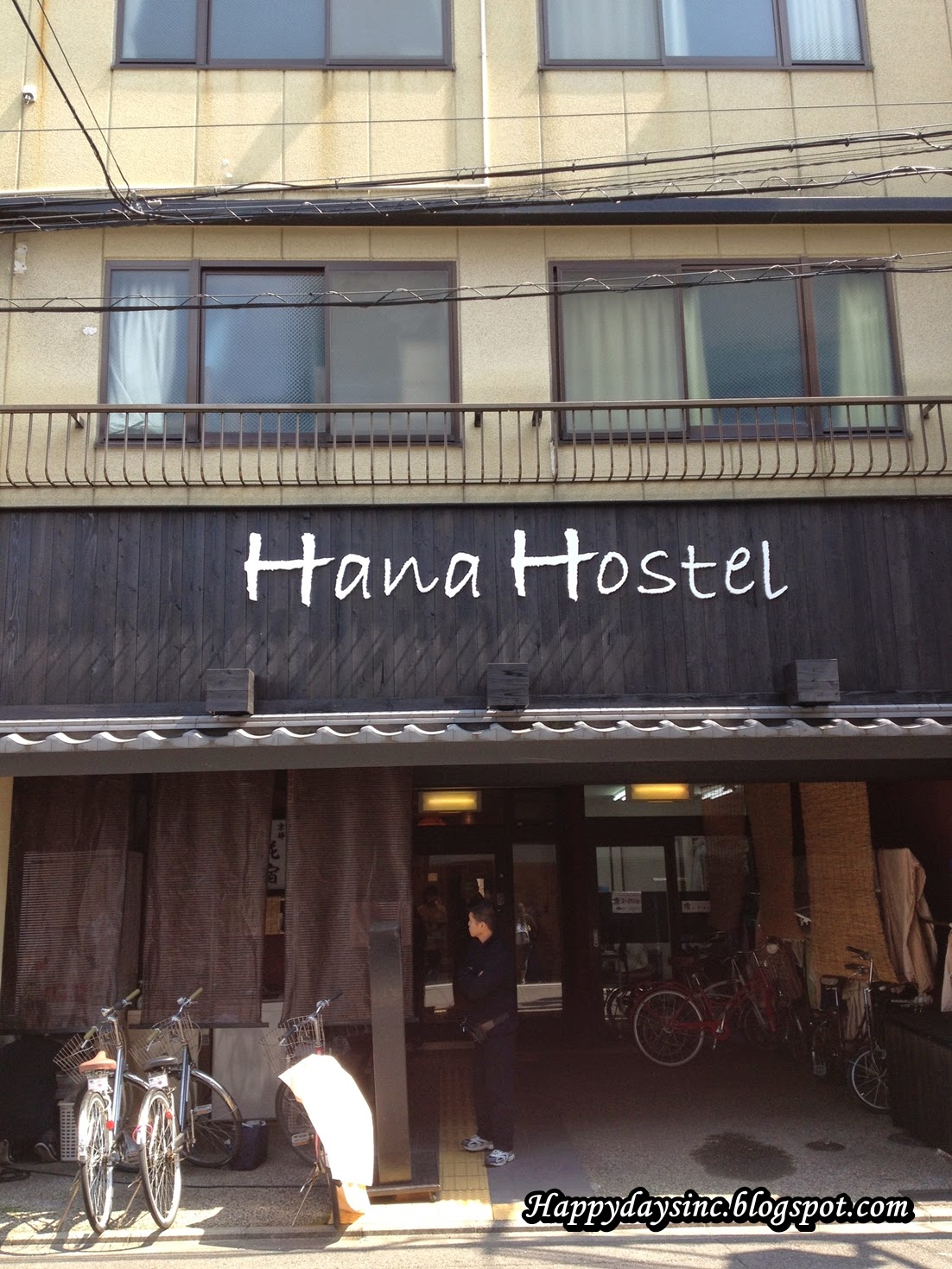 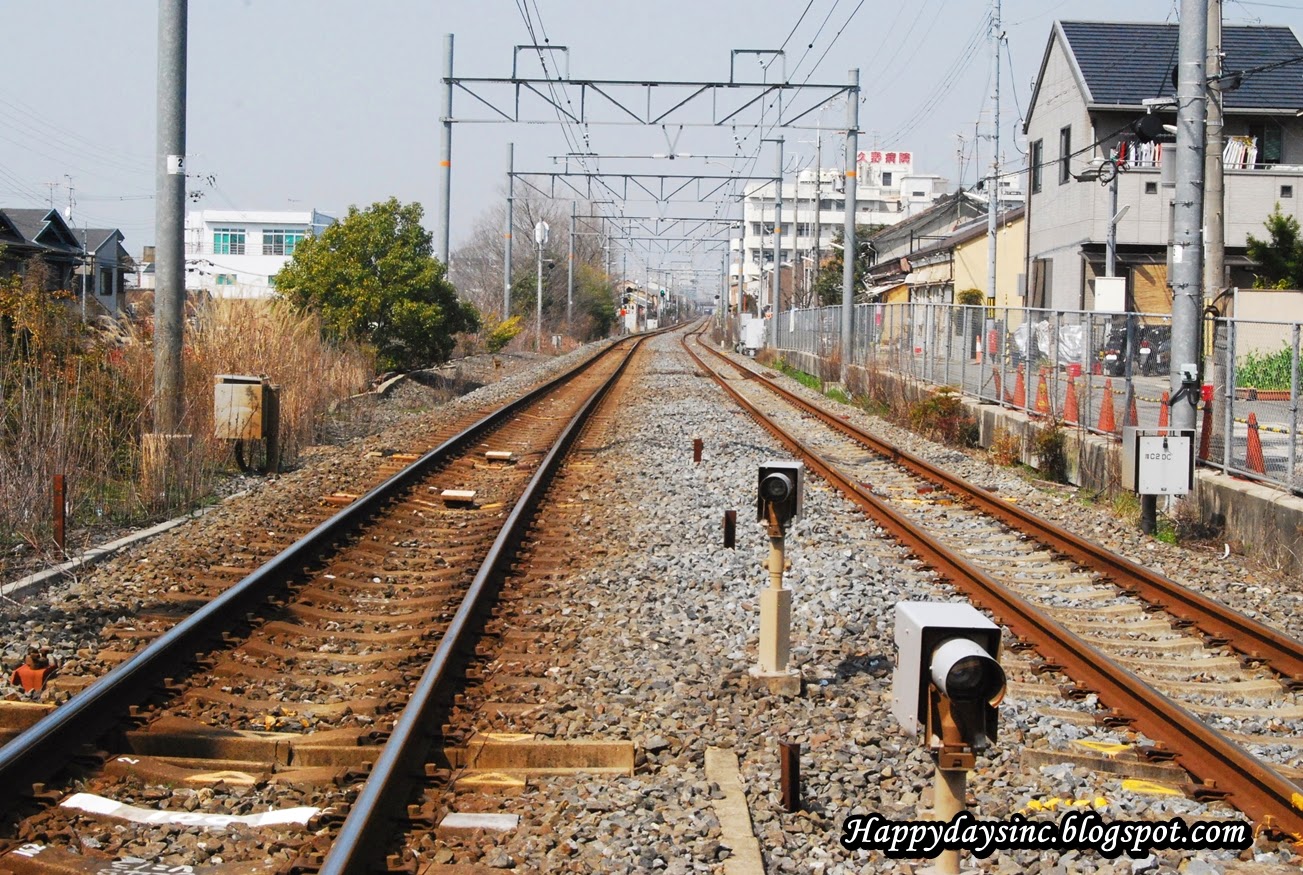 We ditched our luggage there and scurried off in search of food. We headed towards the Shichijo station of the Keihan line, a good 10 minutes walk from the hostel and found a McDonald's right next to the station entrance. Drawn by the Sakura burger promotion, we hurried inside and ordered our sets. Until today, I had no idea what was in my Sakura set except that it was pork, the sauce was pinkish and it was divine. Or maybe I was just that famished. 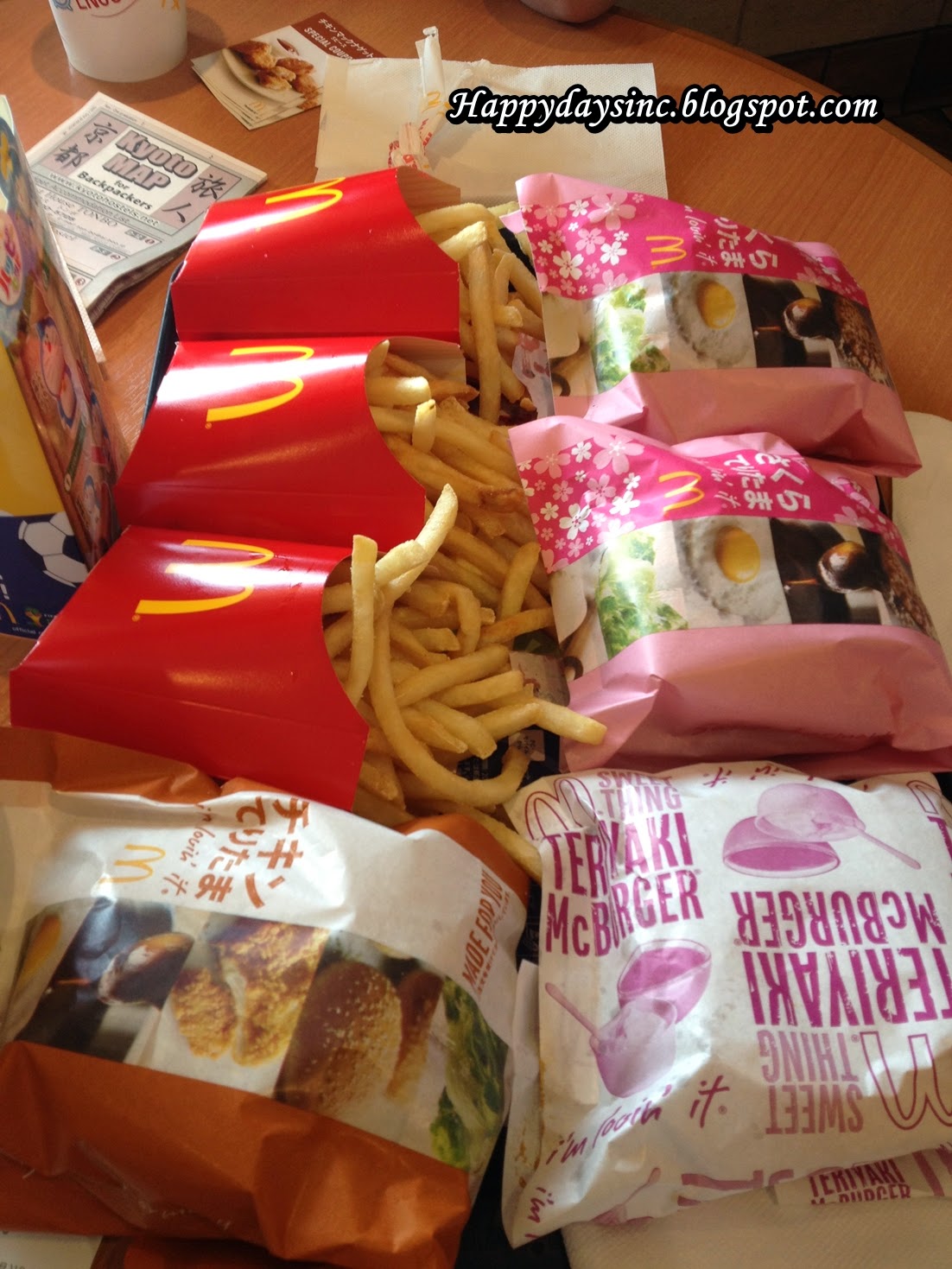 After the satisfying lunch, we took the Keihan train to Fushimi-Inari station to see the attraction of which it was named after, the Fushimi Inari Shrine. Even the walk up to the shrine was interesting with a variety of souvenir shops, stalls and restaurants lining the street to see. It was also in one of the shops here that I spotted more special Japan Kit Kats. 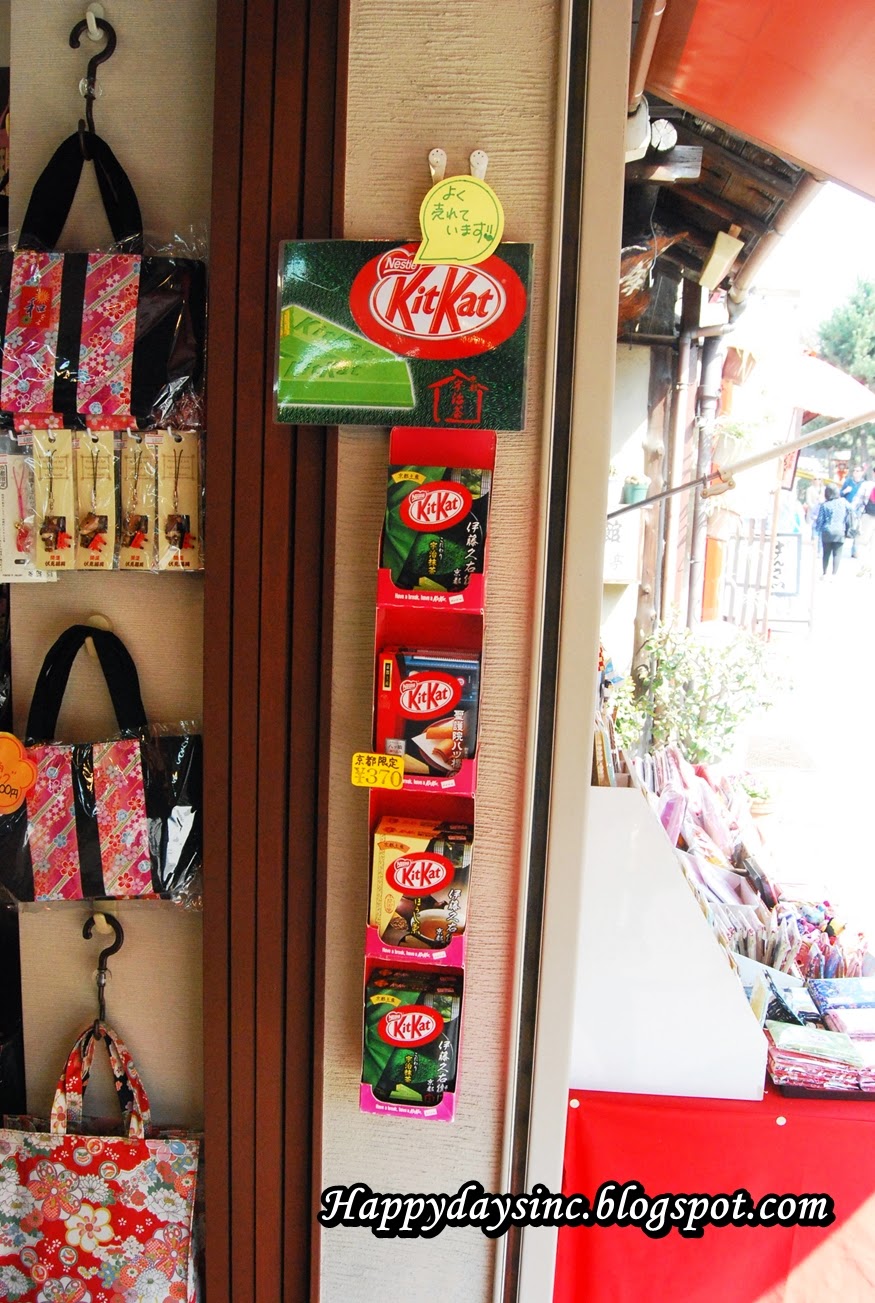 Fushini Inari Shrine was a new experience for me as I have never visited a place so revere by devotees and tourists and one that was simplistically beautiful. The shrine was dedicated to the Gods of rice and sake and foxes were considered the messengers of Inari, the god of cereal which was why there were plenty of them at the shrine. The Japanese also see the fox as a sacred mythological animal capable of possessing people. 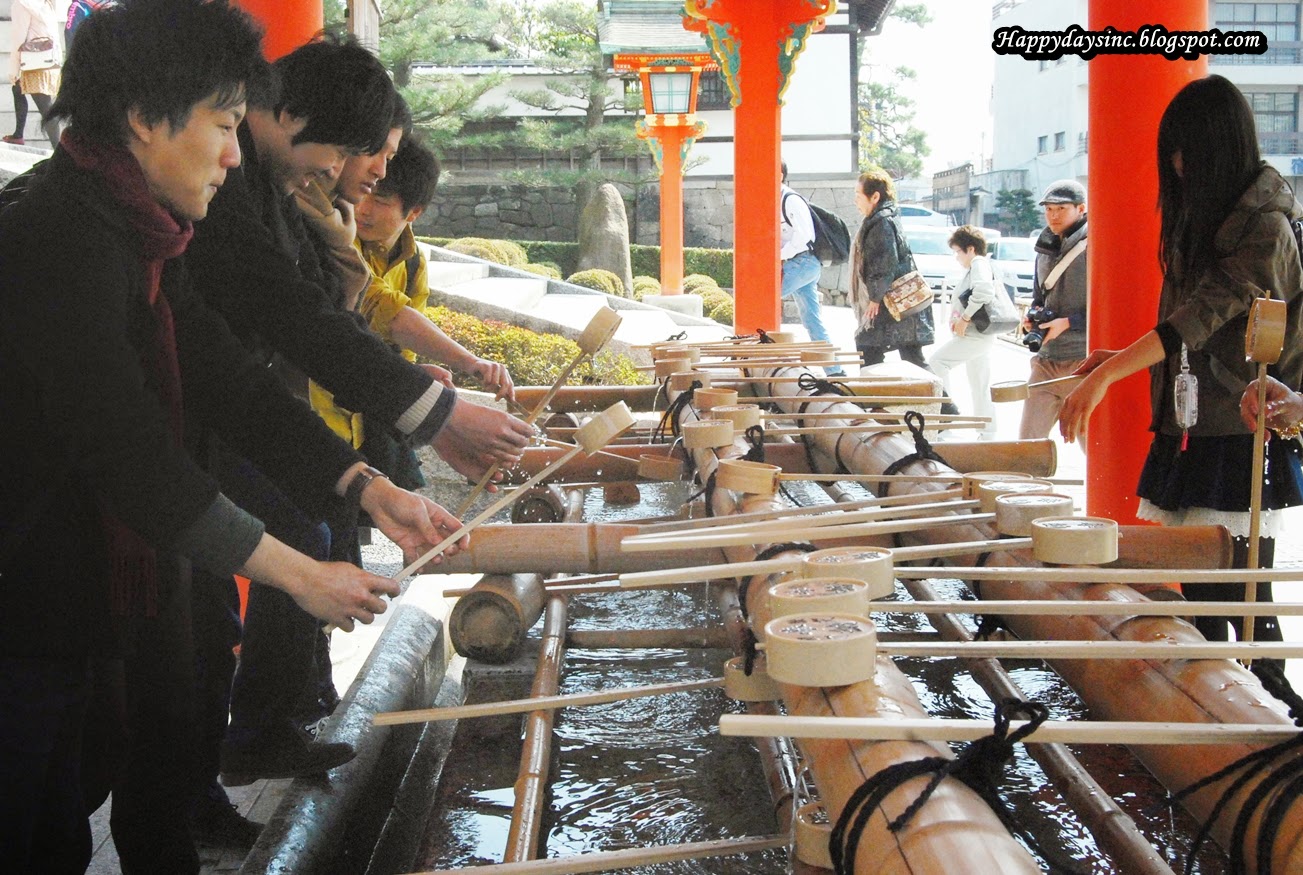 Perhaps that was why the shrine held an amount of respect and awe amongst its visitors. Regardless, it was quite humbling to take part in the process of rinsing my hands and mouth with the ladle provided at the water fountain. before making a donation, praying and ringing the bell at the front shrine. 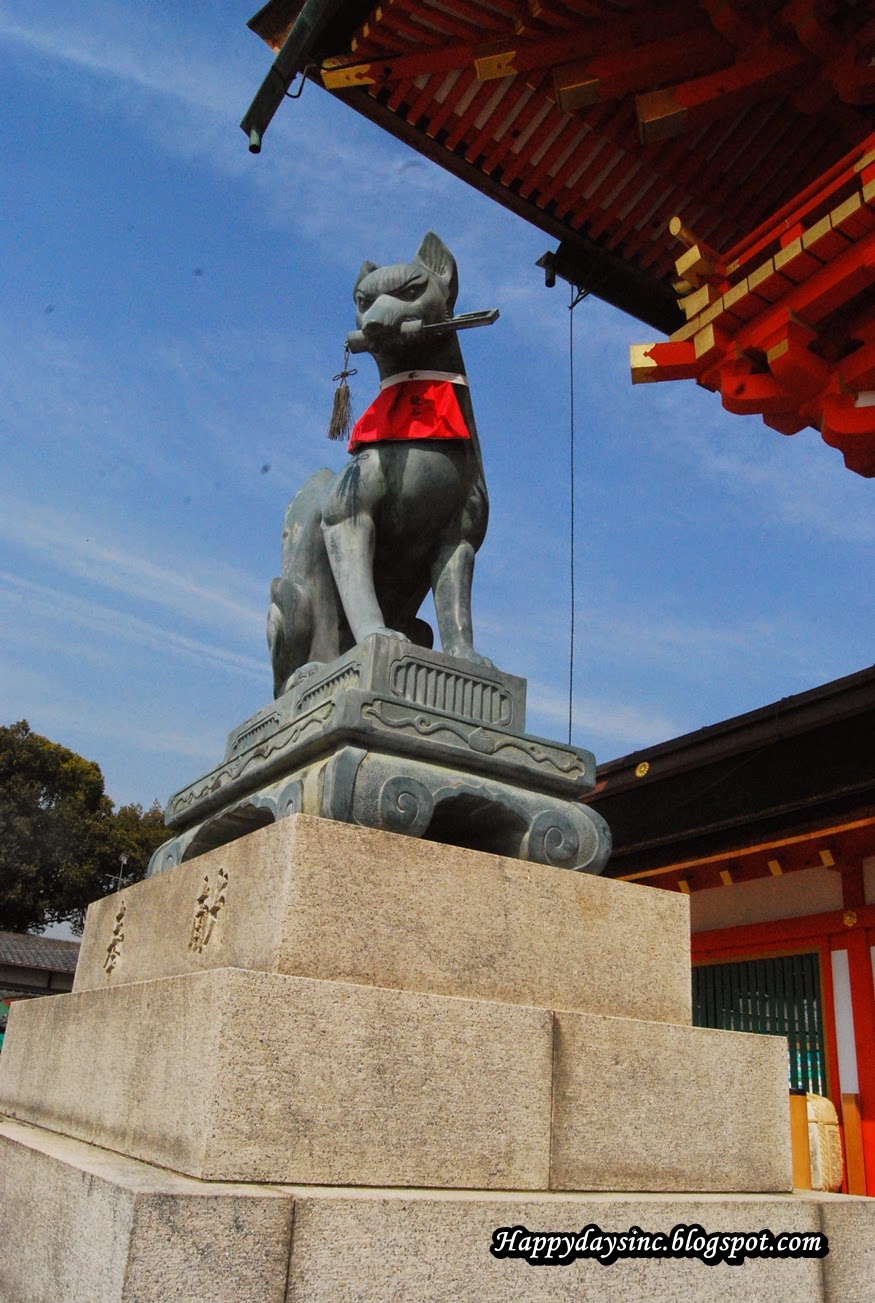 Cousin and Sister proceeded to buy amulets and charms as gifts and those were quite thoughtful gifts as some served as protection or as luck-bringers in specific areas of one's life.  Even if one doesn't believe in these charms, it is the thought that counts right? 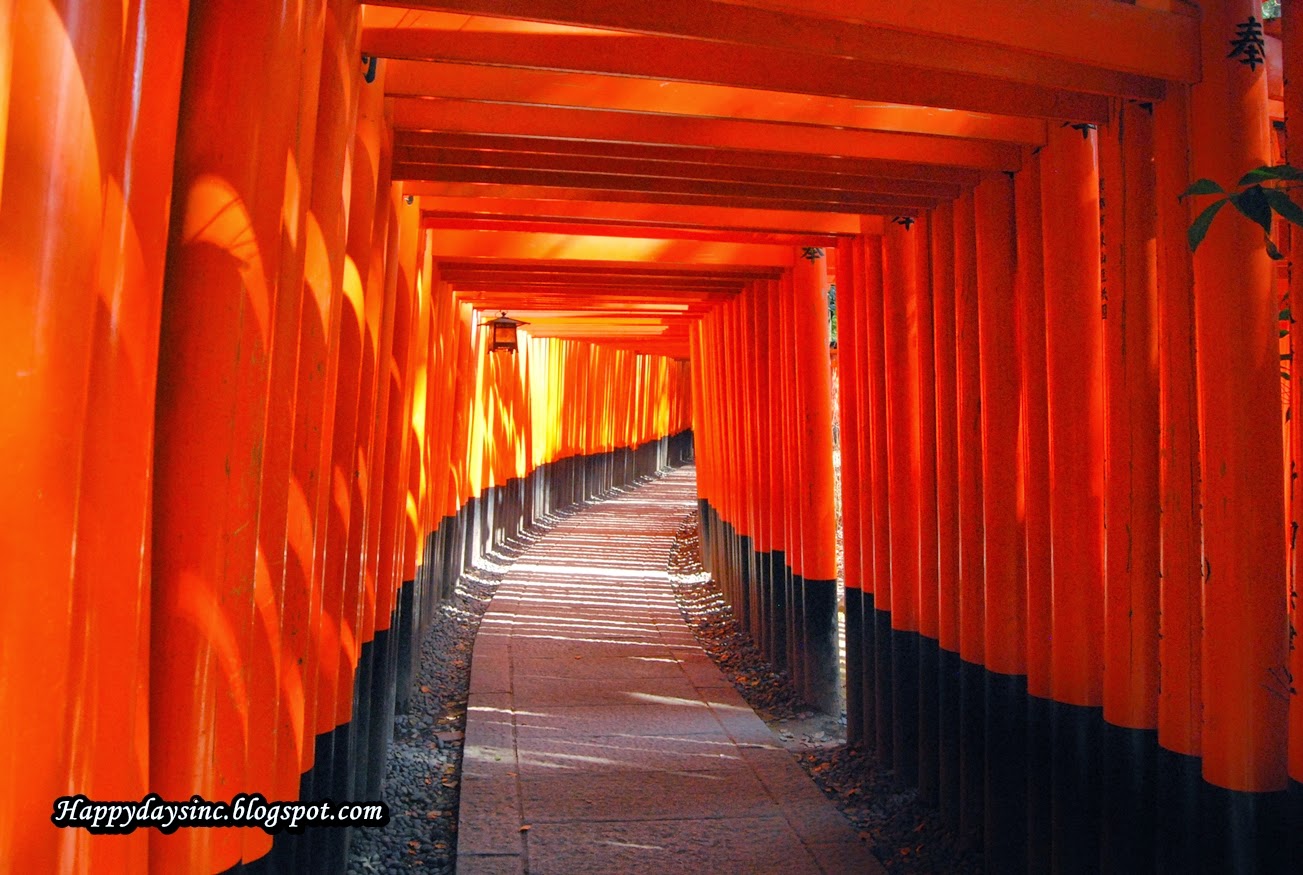 Anyway, if its history or religious value hasn't drawn you in already, then the sight of thousands of vermillion torii gateways should. Did you know that a scene from Memoirs of a Geisha was shot here? The torii gateways snakes all the way up the mountains, creating several tunnels of redness amidst the heavy greenery. It was beautiful and I stopped many times on the way up to look beyond the pillars in hopes of seeing an Inari. 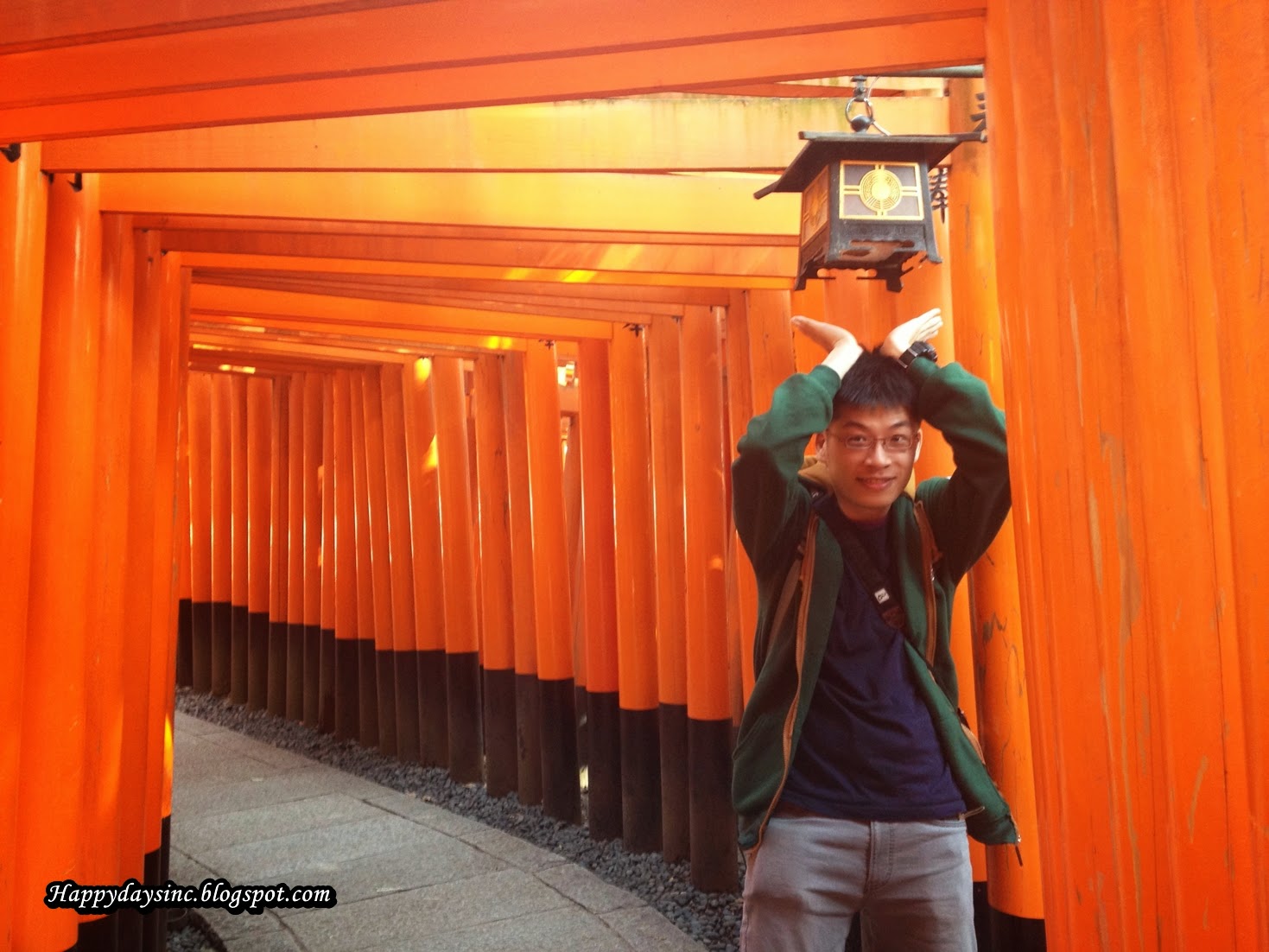 At one point, a section of the torii tunnel would be void of people and we grabbed the opportunity to snap some gorgeous photos of the getaways. The first section are the denser section and thus had the nicest effect. Most people would only go half way up the shrine before turning back down but driving by adrenaline (gungho-ness), we kept going all the way and was rewarded with a nice lookout point with a view of Kyoto had it been a clear day. There was a nice restaurant with the yummiest soft soy ice-cream that also served piping hot udon. We didn't try the udon but it and the sitting area did look nice. 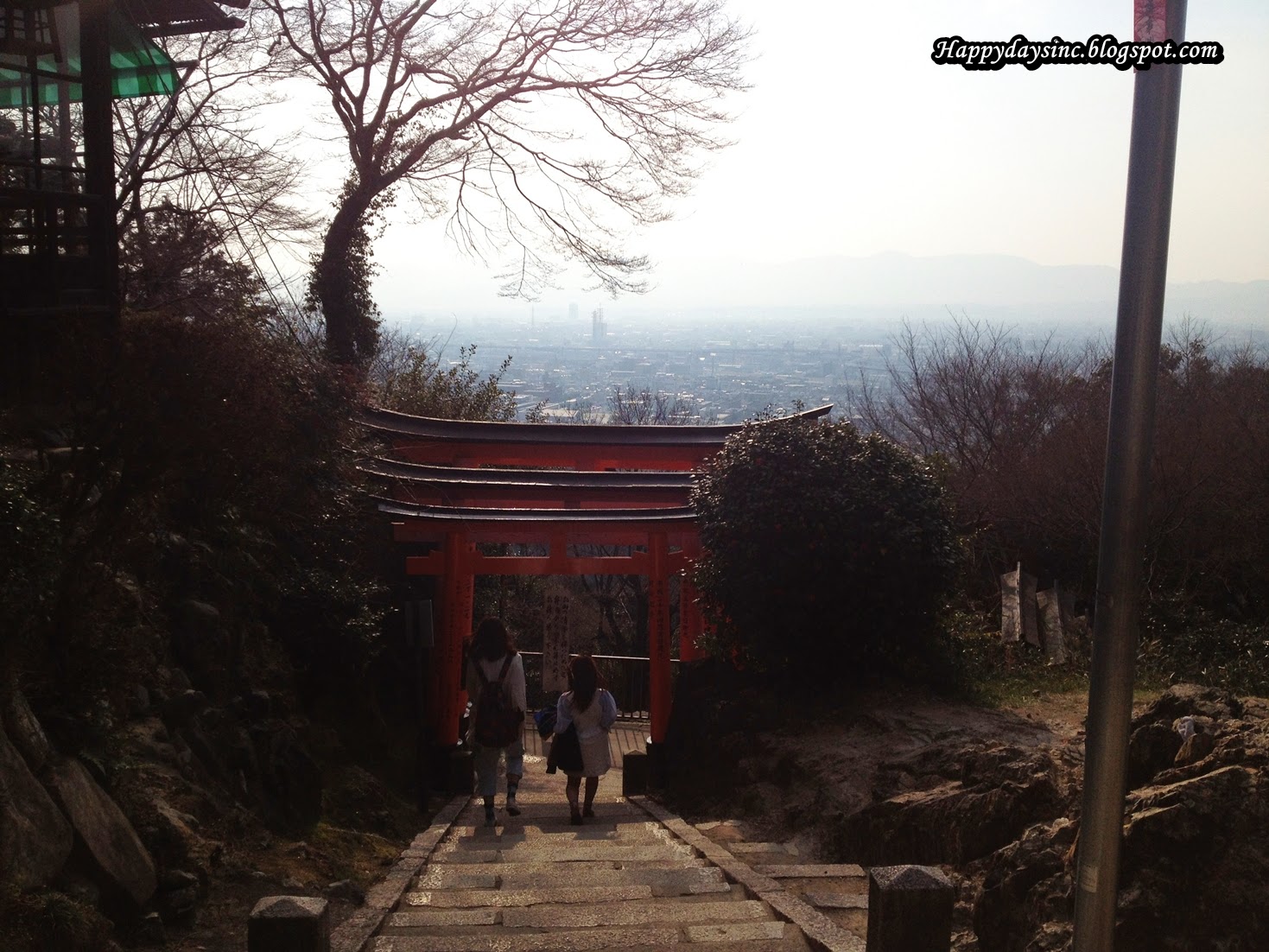 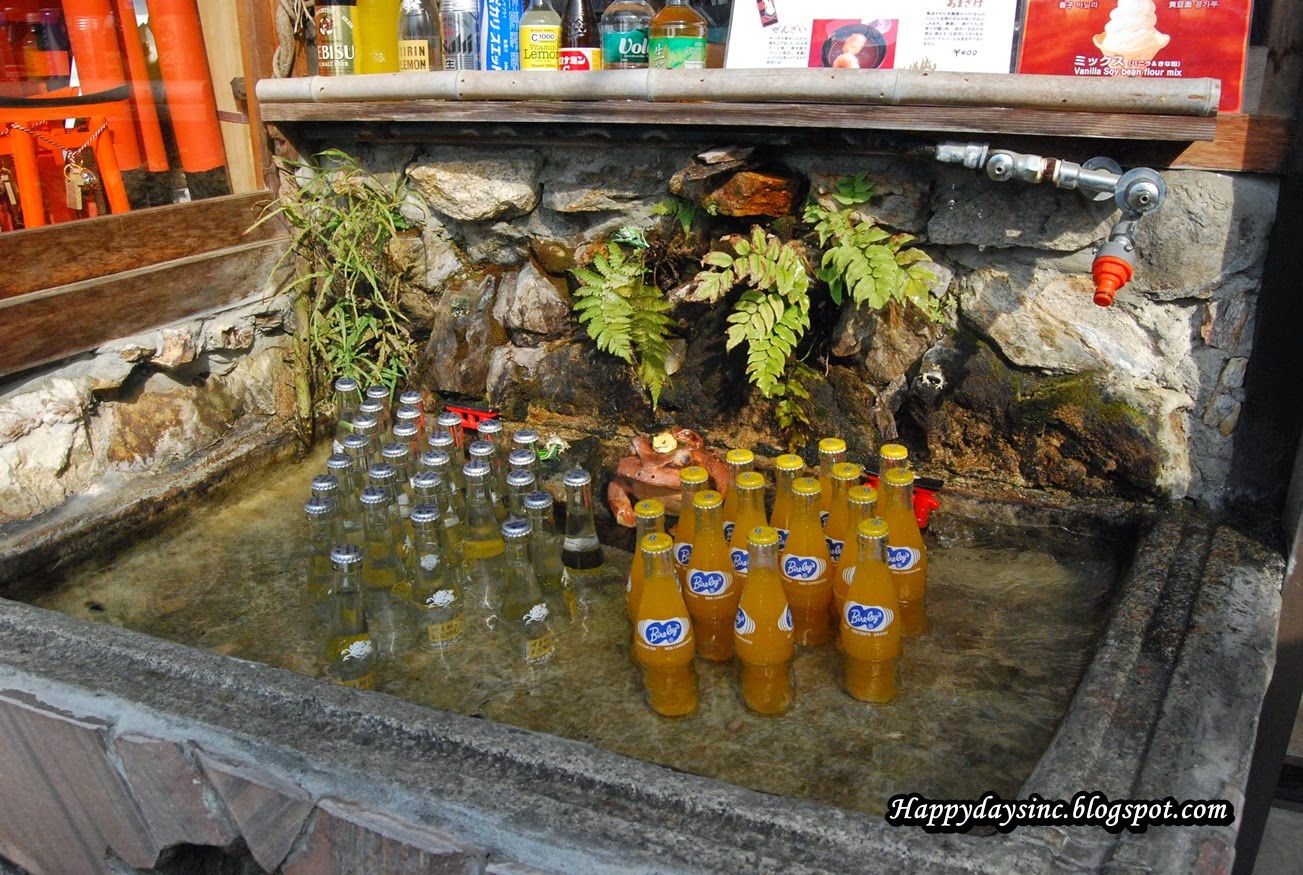 Oh and that wasn't even the top yet. To be honest, there wasn't a view at the top of the mountain, just more shrines but since we were only 15 minutes from the top (according to the taunting directions on the trail), we speed-walked all the way up and made it there in 10 minutes. After spending ten minutes up there relishing our achievement (catching our breaths), we headed back down. 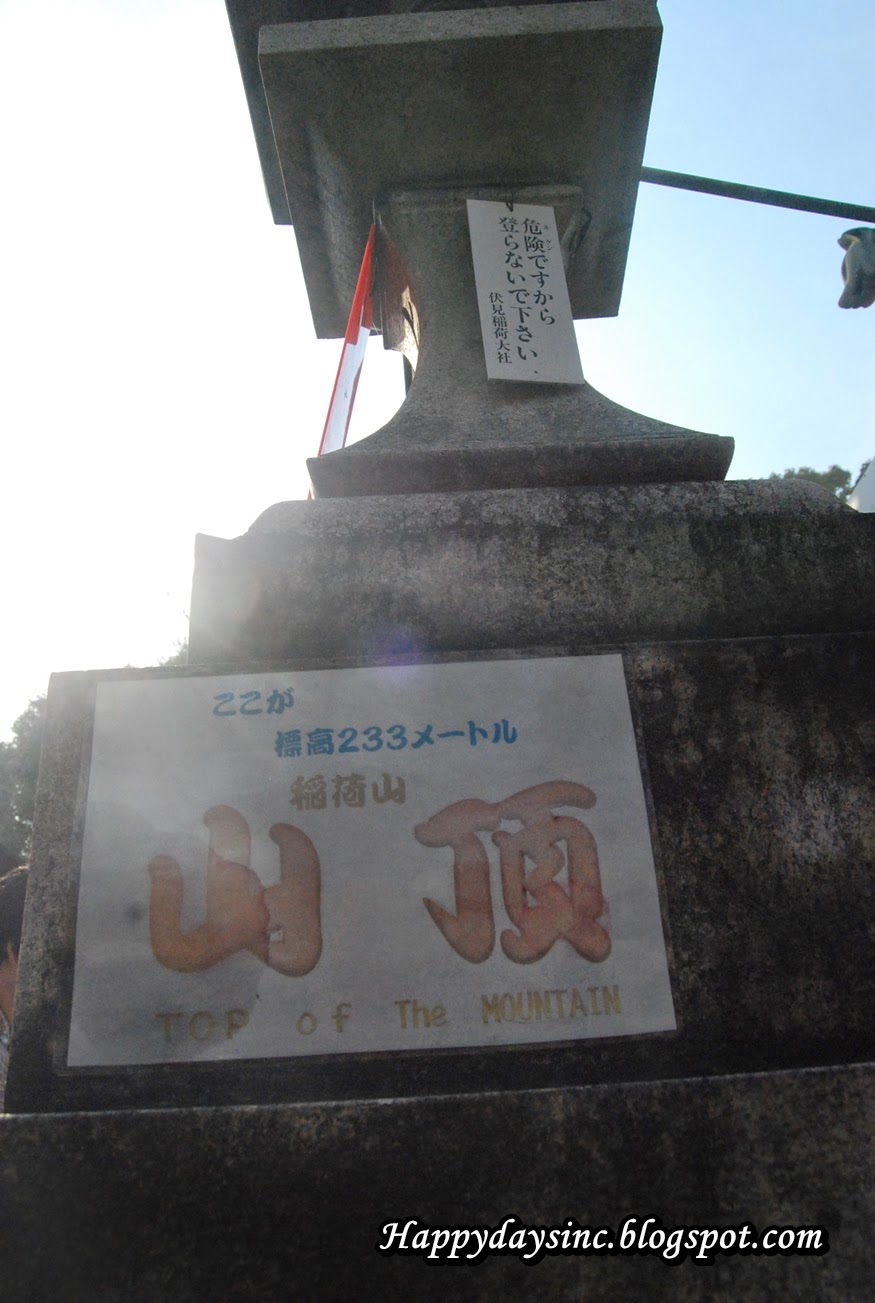 The path was roughly 4 kilometers to the top and it had taken us two hours to reach the top. Coming down however, had only taken us 30 minutes. Because we friggin jogged our way down. Don't try this unless you are wearing sneakers or running shoes. 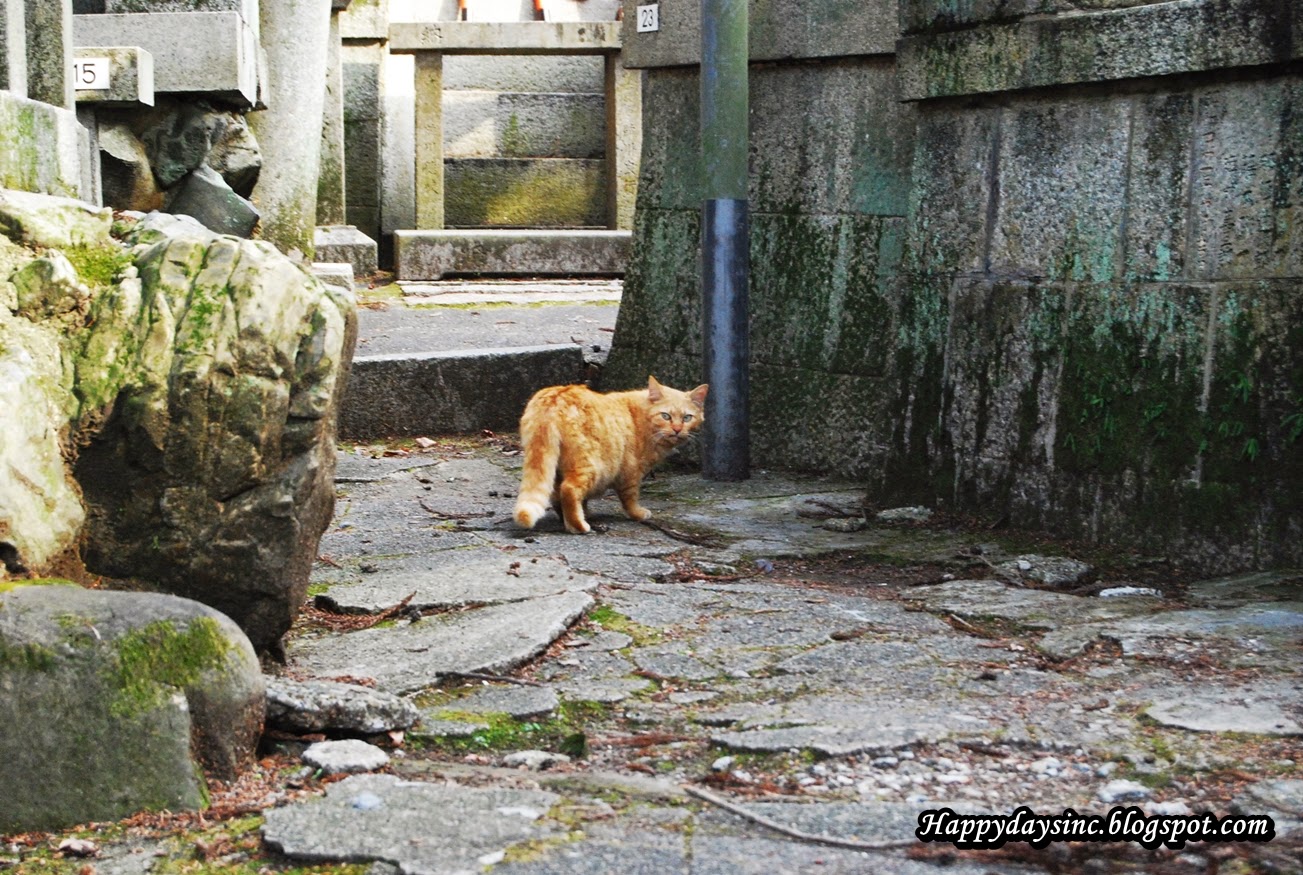 The reason we were hurrying down was because we wanted to spend more time at the shops, being the tourists that we were and a good hour was used up here.

We took the train back to Shichijo station and walked back to our hostel, exhausted and ready to crash for the rest of the evening. But, of course when our tummies started demanding food, I took us to the famous ramen street inside Kyoto station. It was tricky to find it at first but if you are at the main entrance of the station with Kyoto Tower behind you, head right and take all the escalators to the 10th floor. The stairs with the changing messages was a good indication of where you should be headed. Kyoto Ramen Koji (Ramen street) was through a door on the 10th level and inside, you will find eight restaurants that specializes in different styles of ramen from all over Japan. 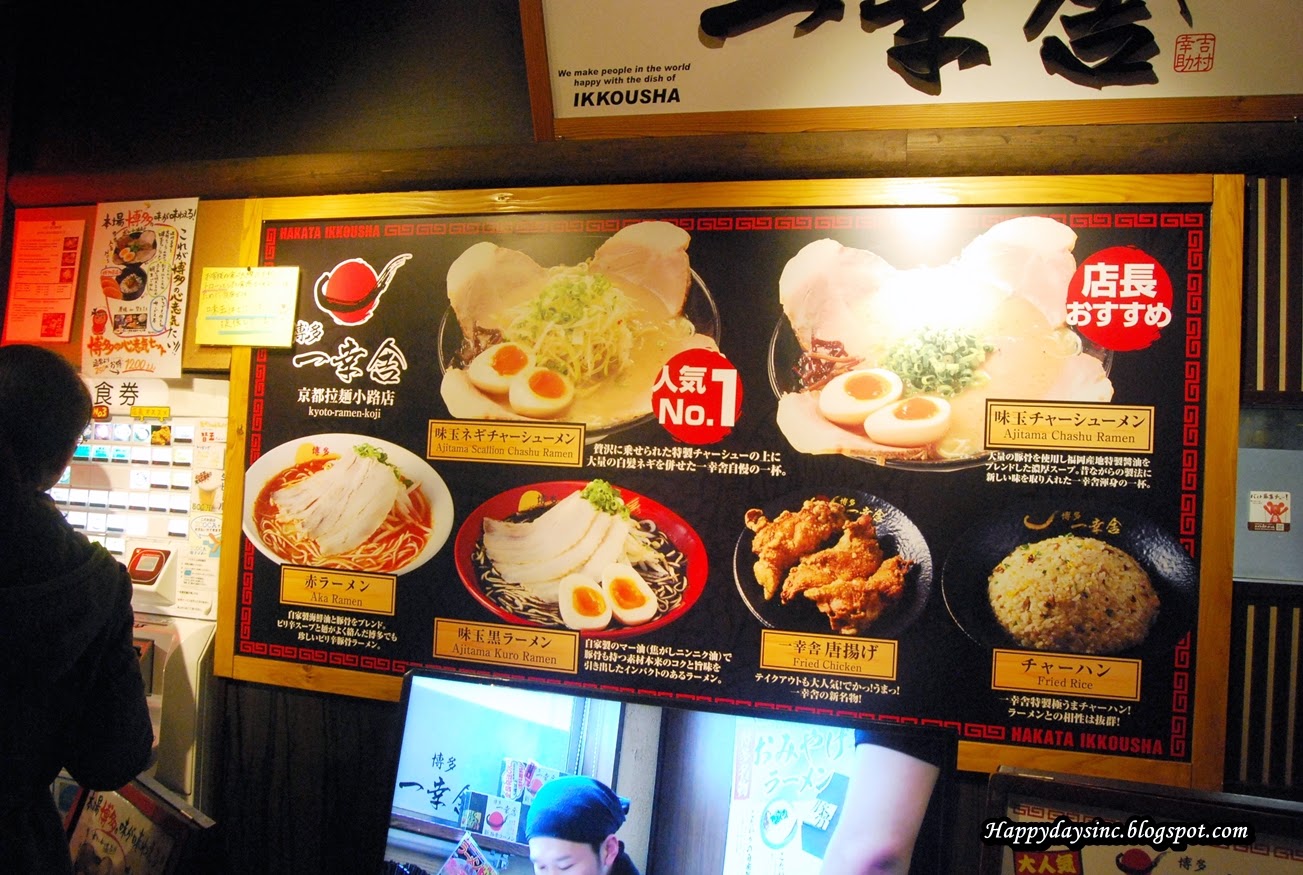 I had opted for the Ikkousha Hakata Ramen restaurant having read raving reviews on it. The process of ordering was simple. There was a ticket dispenser machine outside the restaurant that serves as the menu as well. We just needed to pay the amount, picked our dish and collected our ticket and change. The waiter at the entrance then ushered us to the line waiting to get a seat in the restaurant. After 30 minutes or so, we handed our tickets to the waiter and was seated. In barely five minutes, our food was served, hot from the kitchen. 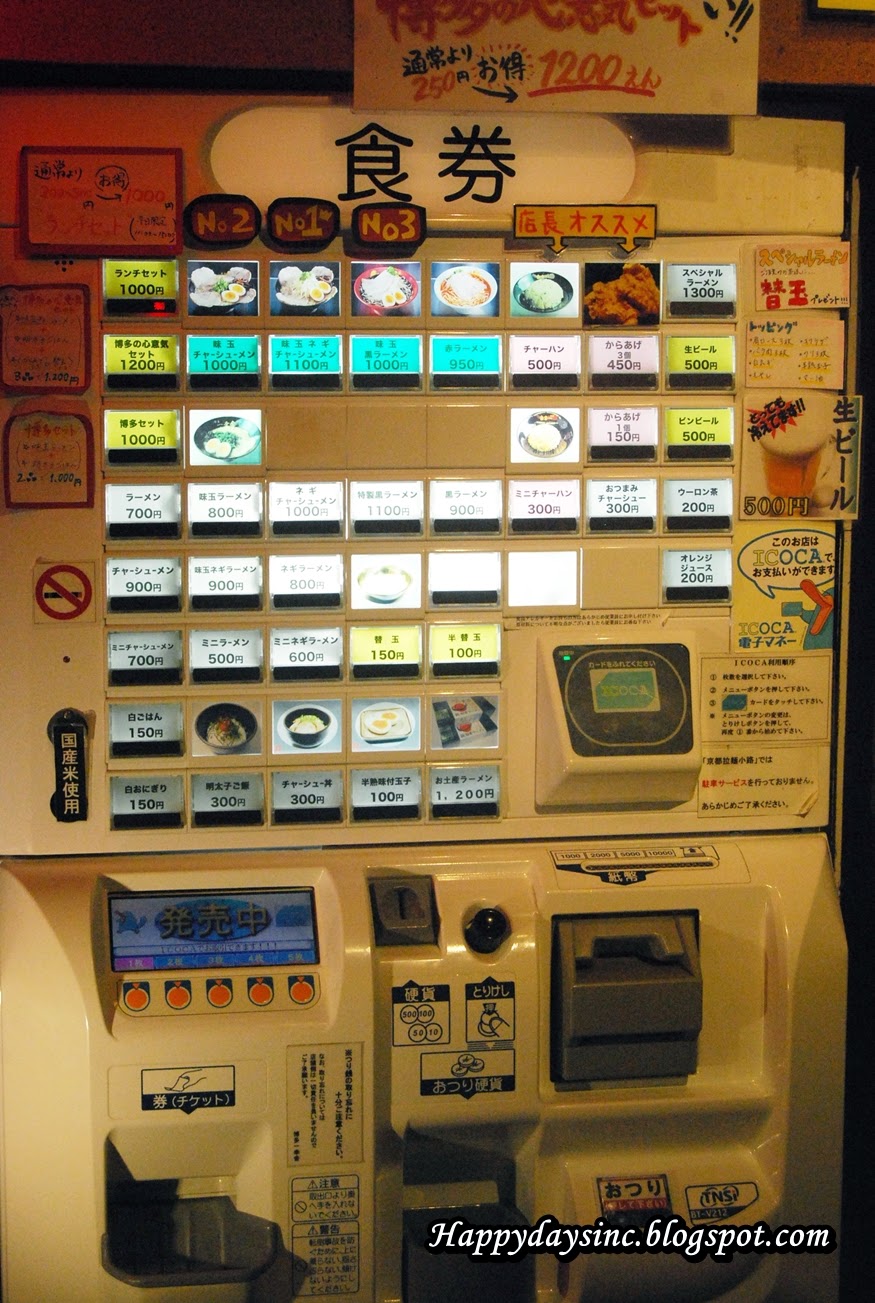 My immediate reaction of my Tonkotsu ramen was "WOW, that is a lot of meat." The top of my ramen bowl was covered with five big slices of pork, a full lava egg and peppered with spring onions. My perfectly al dente ramen noodle was underneath the meat and altogether, it was the best ramen I have ever tasted with the Tonkotsu broth milky and rich in flavour. Needless to say I wiped my bowl clean. Best part, it only cost 1000yen (RM32) which no different than Malaysia in terms of price but it tasted ten times better and with ample ingredients as well. 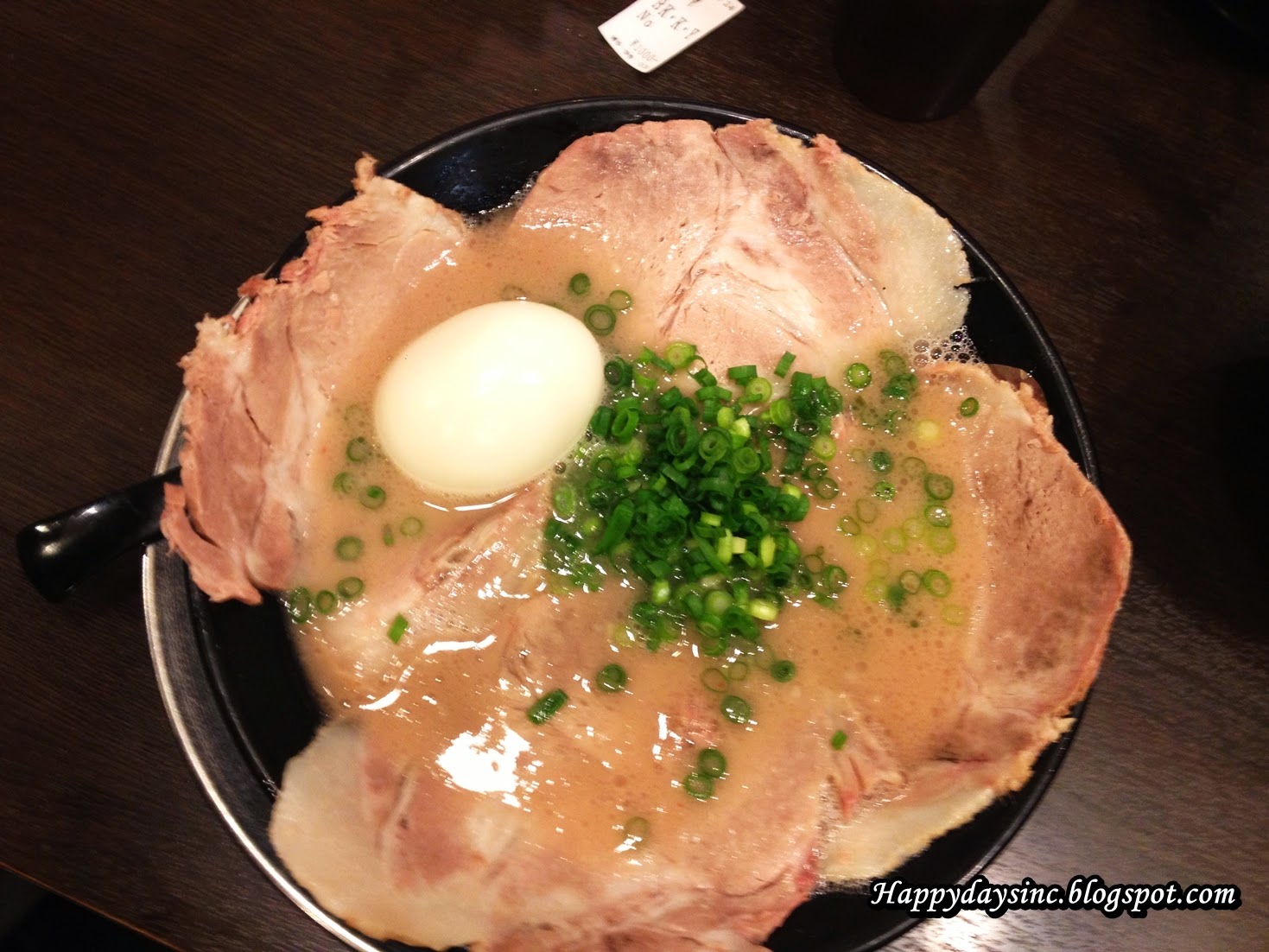 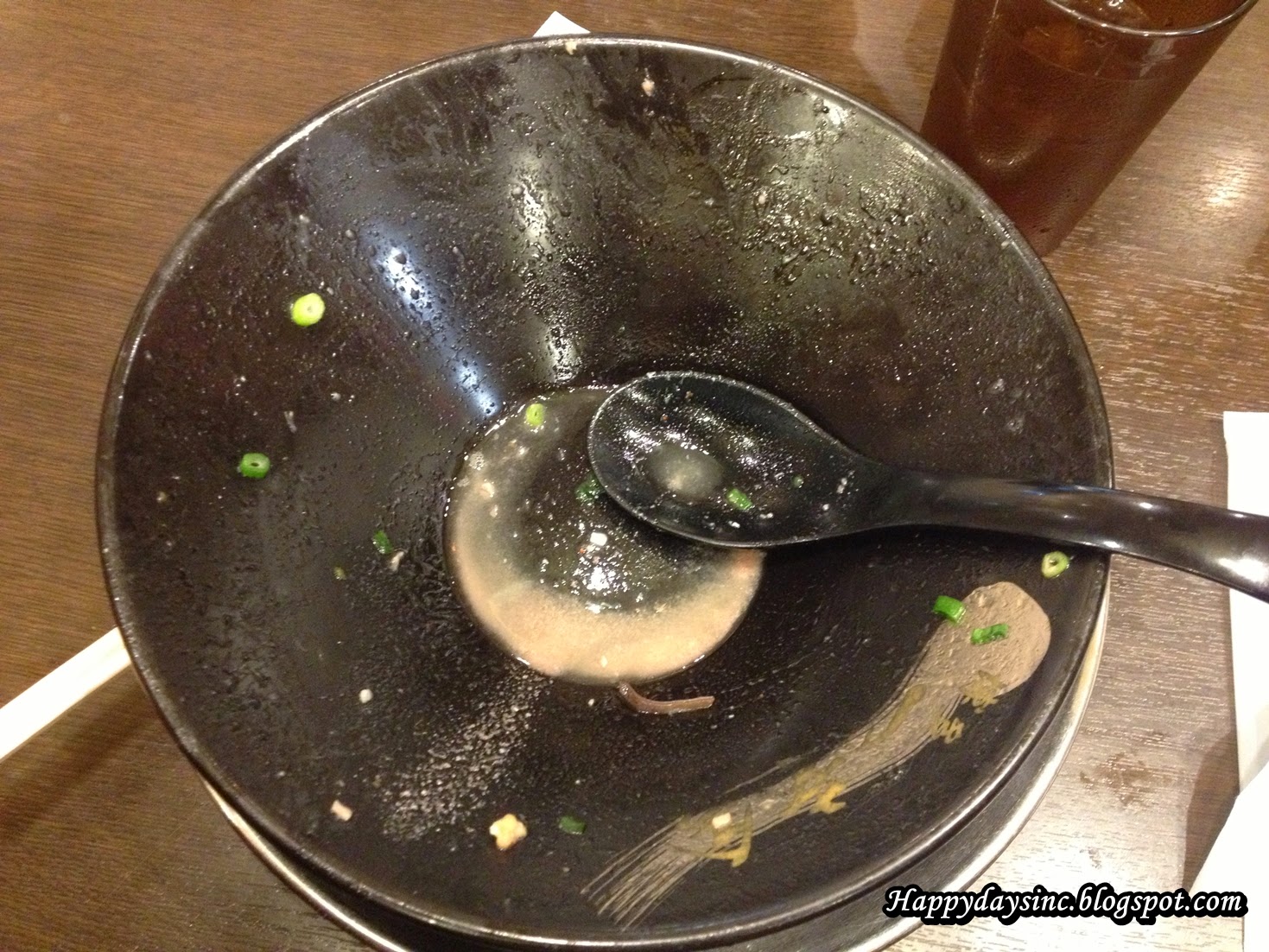 Full and bloated, we wandered on the ground floor of Kyoto Tower for its array of snacks and souvenirs and explored Yodabashi next door. I bought the next addition to my Starbucks Japan collection at the Starbucks below Kyoto Tower. By the time we returned to Hana Hostel, we were truly and officially beat. 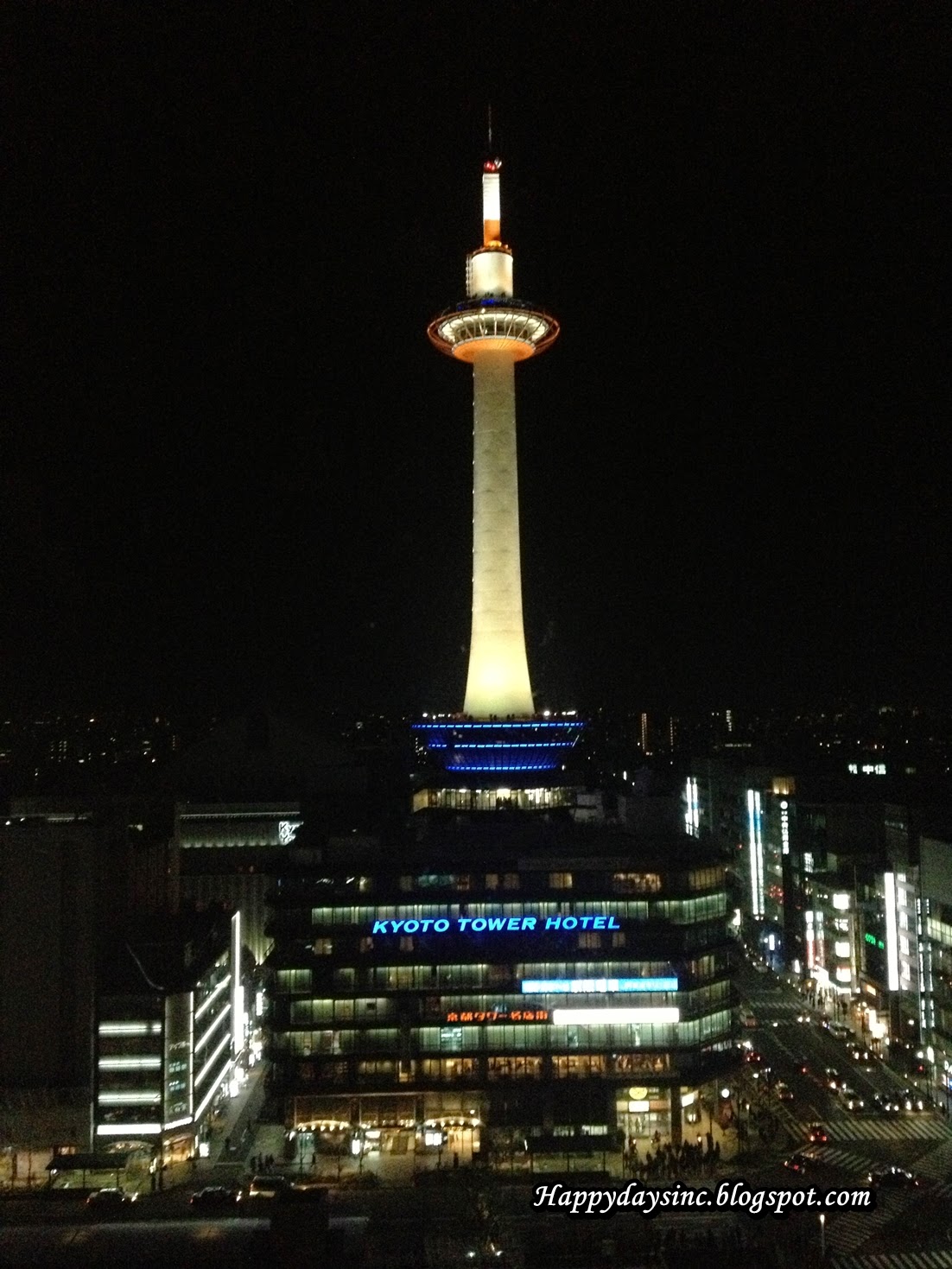 Day 4 on our misadventures on bicycles around Kyoto coming soon.