My current iPhone 4Gs has lasted approximately 5 years and it didn't surprise me when the battery drained fast and dies on me even at 40%. It was infuriating though as I need my phone for work or even to waze while on the go. Even when all I wanted to do was take a picture, the battery would just die on me.

At the constant bugging of a colleague, I finally succumbed and agreed to replace the battery since I was too broke to buy a new phone.
One fine day, she introduced me to iPhoneFix at Centerpoint Bandar Utama. As soon as we entered the place, the big boss asked us what were the symptoms of our phones, quickly listing down my current phone problems to which I nodded to.

For me, he recommended I change the battery which he could do for me at RM175. I said okay without hesitation. He addressed the same questions to my colleague and diagnosed that hers could hold out for a few more months and recommended she come back then to change. We were impressed by his honesty as some would have just told her to get it replaced for a quick buck. 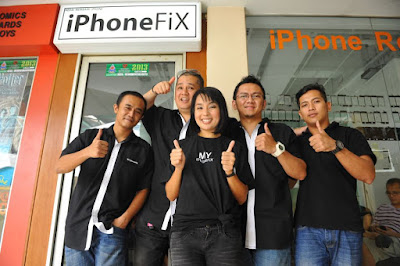 We were told to come back in 30-45 minutes and when we did, my phone was ready with a new battery inserted and charged at 50%. They even tested it to make sure there was no charging problem.
There was a month's warranty on it in case of anything and the big boss even assured me that if there was anything wrong, he would fix it and return my money.

Since then, I've noticed a vast change with my iPhone only requiring a charge after 6 hours, an improvement from a 3 hours life. Even at 10% it's pretty stable and hasn't crashed at all. Overheating is no longer an issue too.

Needless to say, it was the best RM175 I have ever spent. I highly recommend going there to get your phone battery replace rather than purchasing a new phone altogether. They also have parts for Samsung, Sony and even iPads.