From late Autumn to early Spring, the waters along the New South Wales coast burst into life as thousands of whales migrate north from the cold Southern Ocean to feed and breed in the warmth of the Pacific.


The Humpback Highway runs right alongside the New South Wales coast and each year more than 30,000 whales make their annual migration from Antarctica to the Pacific (and back again). Nature lovers can watch the show from numerous scenic coastal lookouts and walking tracks.


Spot whales from Cape Byron, Australia’s most easterly point, and on small cruise tours like Whale Watching Byron Bay and Blue Bay Whale Watching. To get a better view, Go Sea Kayak Byron Bay and Cape Byron Kayaks will take you out on the water to observe the much-loved mammals up close.


The second most easterly point in NSW, Port Macquarie’s 9km Coastal Walk connects Town and Lighthouse beaches, and is dotted with frequent vantage points perfect for whale spotting. Cruise on Port Jet Cruise Adventures’ Wave Rider, one of the fastest commercial whale-watching boats around, or get a bird’s eye view with Port Macquarie Seaplanes.


Jervis Bay is halfway along the whales’s 4,000km migration route, and they often stop here to rest and play with newborn calves. Jervis Bay Wild will get you close to the action, or head to Penguin Head atCulburra, Caves Beach or the viewing platform in Booderee National Park to watch from the shore.


For an unforgettable experience, join a whale-watching cruise in Port Macquarie and explore the ocean for humpbacks, southern rights and other whales. Between May and November, these majestic mammals migrate in their thousands along the coast of NSW.

What to spot
Southern right whales
Characterised by their broad backs and dorsal fins, wide pectoral fins and a long arching mouth, southern rights have dark grey or black skin with patches of white around the throat. The slow moving southern rights enjoy shallower water, have two blow holes which produce a distinct v-shaped blow, and are often spotted in surf zones. 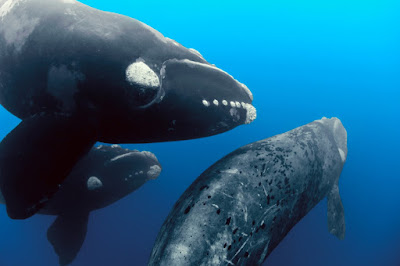 Humpback whales
Known for their magnificent aquatic acrobatics, humpbacks are frequently spotted leaping from the water with their fins outstretched (known as breaching). Humpbacks have large pectoral fins, unique black and white markings under their tail flukes, are often dotted with barnacles, and arch their backs steeply when they dive. The males are also known for their long and complex whale songs, which can last for hours, are specific to different groups and can be heard for hundreds of kilometres. Humpbacks make one of the longest migrations, averaging 5,000km. 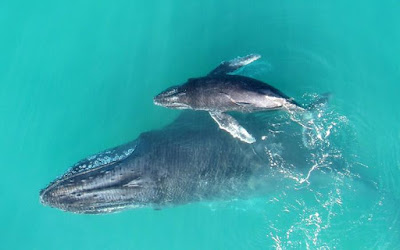 To read about my own whale watching experience which ended disastrously, go to this link.
If you're heading to Sydney and plan to whale watch, click on this link.
Posted by Tania at 9:17 AM