That Time I drugged myself on a Whale Watching Cruise

In all fairness, it wasn't on purpose.

Whale watching was something I've wanted to try for a while now and on my recent trip to Sydney, managed to sign up for one along with my sister and friend. According to the email we got, it departs from Darling Harbour at 8am and it was advised to take seasick pills if one had a tendency to get seasickness. Not wanting to spending the trip heaving breakfast into a brown bag, we went out and bought seasickness pills from Chemist Warehouse. 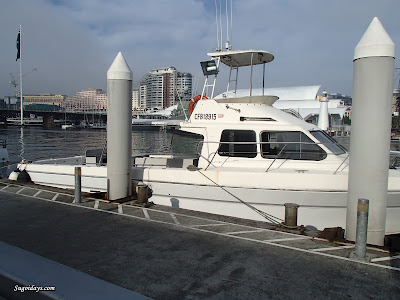 When we got to the dock, we quickly saw why medication was needed. We were heading out to sea on a small jet boat that could take up to 15 people, a pitiful sight compared to the other cruise boats that towered over us like ferries. It reminded me of the speed boats used to ferry people to Taman Negara in Pahang. 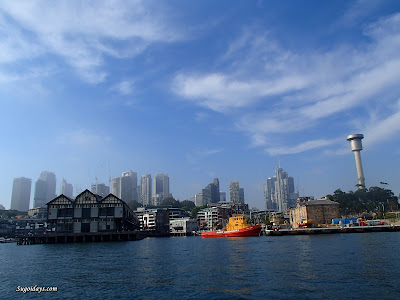 Anyway, we popped in the pills before boarding and were told by the captain and his assistant that it was going to be a bumpy ride. Before we could curse bloody murder, off we went!

The first 30 minutes of the ride made for great photo opportunities from the water as the boat sped past the iconic Sydney Harbour Bridge and the Opera House. At that point, passengers, ourselves included, were still moving about the boat to take pictures. 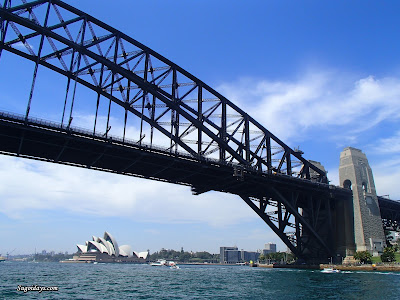 Mind you, the speed of the boat had chilly cold air blowing at us and lured us to cuddling close for warmth. Combined with the rocking motion of the boat, we couldn't resist the lure of sleep no matter how hard we tried. I kept jolting myself awake every time my body would pitch sideways but my eyelids would always soon slid close. 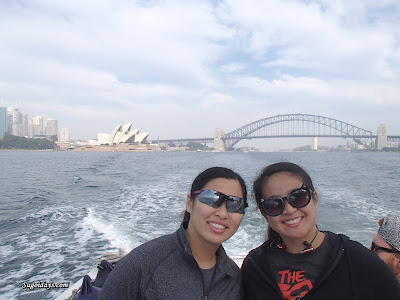 Initially we thought we were exhausted from the Spartan Race Stadium we did the previous day but we had expected sore muscles rather than sleepiness. For the remaining one hour ride to the whale grounds, we were all snoozing in an upright position on the hard benches of the boat. All three of us were completely out of it.

By some miracle, we woke up in time to see the first whale make it appearance. It was an unique experience being able to see these massive mammals just frolicking in the waters along with its calves in all its glorious freedom and not cooped up in a tiny box of an aquarium. Not quite as magical as watching spinner dolphins in Maldives but a treasured memory nonetheless. 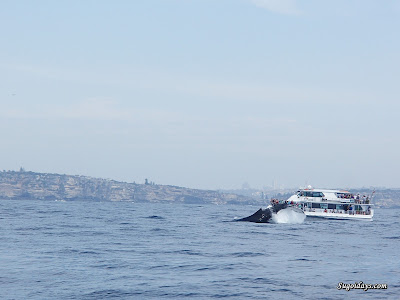 But it was also then we discovered that whale watching boats aren't allowed within a 20 meter radius of the whales to avoid spooking them. Sadly, a private boat trailing after our boat didn't get the memo and kept approaching the whales, causing them to flee. This issued into a shouting matching between our captain and the fat female lubber manning the boat. 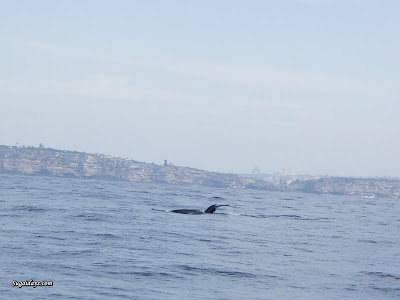 Or something like that. I was too drowsy and also partially distracted by the auntie puking her stomach out into a bag due to seasickness. She looked horrible and I was instantly grateful for the pills, side-effects be damned.

It was only later after returning to Harbour that we realised that the pills had drowsy side-effects. It was so strong that it knocked us out even on the ride back. I was pretty much stoned through lunch and even on the ferry to the Sydney Opera House. I even slept on the public ferry, freezing cold wind blowing in my face and all. It took walking around Sydney to shake it off.

But on the bright side, I took the same pills on the overnight flight back to Kuala Lumpur from Melbourne and despite the 3 hours delay, that was the best sleep I had on-board an AirAsia X flight.

So the lesson learnt here - read the damn prescription box for its side-effects first.
Posted by Tania at 10:31 PM

those pills are awesome for overnight flights. just be prepared to be stoned after