The Power of Fandom

Have you ever walked out of the movies or finished reading a book and wondered what if the ending had been different or if a character from another universe had been in it?

For instance, what if Buffy the Vampire Slayer had been in Twilight? Okay, we all know the answer to that one. The book would have ended in Chapter 2 and we would have been spared Bella's constantly stoned state.

Or what if Jeremy Renner's Aaron Cross and William Brandt from Bourne Legacy and Mission Impossible 4 were all part of Clint Barton/ Hawkeye's many secret identities in the Avengers movie-verse?
Yeah...I have definitely been giving that one way too much thought.....

So anyway, there is a website called Fanfiction.net where just about anyone can contribute their own stories featuring characters from their favourite movies, anime, TV series and etc etc. You can get a wide range of stories, parodies, poems and crossovers from all sort of writers and storytellers here and some of them are pretty damn good writers. Better than published writers even. 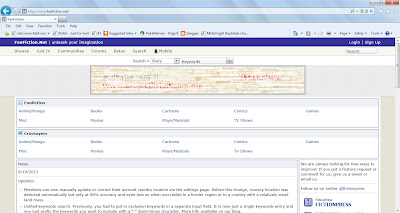 I am not going to namedrop any authors because I don't know what rocks your boat. I am merely sharing with you a site that I have been following since high school that has helped expand my imagination....and caused me to flunk half of my subjects during my finals.

Or if you prefer something along the lines of a parody, watch HISHE (How It Should Have Ended) videos. The animation is awesome, scripts are hilarious and the voice actings  are just spot on! Just watch the Batman spoof below:


Or for something of a musical, do check out the Hillywood Show by Hilly and Hannah. Their production work is just amazing considering that their videos are funded from their own pockets. Kudos to these talented sisters!


If you like fan-made manga, comic and anime, then I would suggest checking some doujinshi works over the Internet or even from some of the local talents at Comic Fiesta 2012.

There will be cosplayers, doujinshi artists, fan-made merchandises and video games. The dedication and effort these fans put into their work is just impressive as you'll see Final Fantasy, Bleach, Naruto and Dragonball characters literally come to life. Those with DSLR cameras, this event is the best to put your photography skills to good use because you will have ever ready models always prepared to strike a pose for you!

It's a two-days events with tickets available at RM20 per day or RM35 for both days. For more info, go to their website at http://comicfiesta.org.

And before I sign off, here's a little random redundant fun fact:

The Fifty Shades trilogy was initially written as a Twilight fan fiction, originally titled Master of the Universe (insert He-Man theme song here). It was published on fan-fiction websites by E.L. James under the pen name "Snowqueen's Icedragon". Now over 60 millions copies have been sold worldwide. (source: wikipedia.org)

The power of fandom, not to be underastimated.

Also, HAPPY DEEPAVALI!
Posted by Tania at 8:48 AM

if you havent gotten your tix for Comic Fiesta, get it soon to avoid the queue!

And who knows, we might bump into each other but not know each other =D

Hey there! I know this is sort of off-topicbut I had to ask.
Does running a well-established blog like yours tae a massive amount work?
I am brand new to writing a blog however I do write in my journal daily.
I'd like to start a blog so I can easily share my own experience and feelings online.

Please let me know if you have any recommendations or tips for new aspiring blog owners.
Appreciate it!


Fеel freе to suгf to my web page -
Phuket bar

Appreciating the commitment you put into your site and detailed
information you offer. It's great to come across a blog every once in a while that isn't the same old rehashed information. Great read!
I've bookmarked your site and I'm including your RSS feeds to my Google
account.

Also visit my pageat How To Make Money From Home ()