So recently my family and I wanted try out the supposedly famous Fatty Crab restaurant in Taman Megah. Unfortunately it was an impromptu decision made at 8pm that day and by the time we got there, a long line had gathered. No matter because we really wanted to eat crab that day so we joined the line as well.

After half an hour, no one attended to us! Argh! There was an auntie (who for lack of a better word, was a real bitch) barking out orders at customers to wait for her to get to them. My mom tried to get her attention but she downright brushed past my mom to attend to a bigger group that arrived later than us. My mom was pissed. 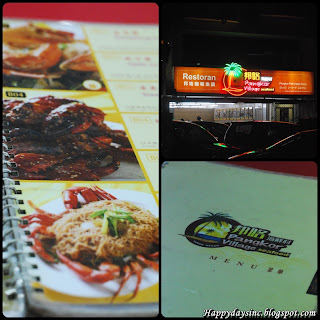 ﻿Then I proposed heading over to the less-crowded restaurant opposite the road, Pangkor Village Seafood restaurant. Hungry and irritated, the family agreed and within two minutes, we were seated without any fuss. Every table in the restaurant was filled with people, which I guess, was like us. Unable to deal to Fatty Crab's shitty front service.

Unlike Fatty Crab which has a limited menu to deal with the overwhelming customers, Pangkor Village Seafood's range of dishes is much wider. That night, we ordered five dishes to try.


To start off, we had the Fried Mantau Bun (RM2.50/5pcs) Expectedly, it was soaked in oil. Nothing a little tissue paper can't solve. From the first bite, it was crunchy on the outside, soft on the inside. Good stuff. Just wished it came with something to dip it in but it was fine for a starter.

Next up was the lala soup (RM18), a family favourite. With white wine and wolfberry for favour and kick, the amount of clams in the broth is a lot. It was a nice way to wash down the other dishes we had.

Aside from that, we also had the Vege Beancurd (RM13) and steam Green Dragon Beansprout (RM15). Those were pretty much average but goes well with the main star of the night, the Salted Egg Crabs (RM74).

The crabs were fresh and the salted eggs were marinated so well through the shell and into the flesh that it has me sucking everything clean. They gave us a generous portion of the pinchers which was a real fun to break open in order to reach the fleshy goodness inside. All use of utensils were immediately abandoned as soon as the crabs came. By the end of the night, let's just say we all embraced our inner food neanderthals.

The total damage came up to RM134, taking into account a pot of tea, tidbits and rice. Overall it was a satisfying experience and I would definitely go back to Pangkor Village Seafood again for their Mantau Buns and Salted Egg Crabs. 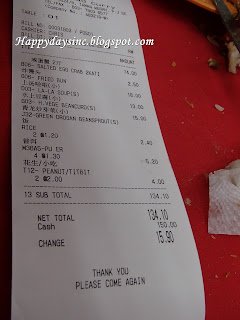 As for Fatty Crabs, it will be a while before I will attempt to try that place again. Until then, I hope they come up with a much more efficient and unbiased seating system that isn't handled by an old lady who thinks bigger groups means more ka-ching...