The alarm went off at 1am and one by one, we reluctantly rolled out of bed to get ready for the hike to the summit of Mount Kinabalu. By the time we went downstairs to the common area to grab a bite from the supper buffet served, it was 2am and other groups of hikers were already chewing at their breakfast/supper of fried rice, meehoon, eggs and sausages. You would think we might overeat but the anxiety of the summit hike curbed our appetites. For that extra kick later, I also took a power gel. 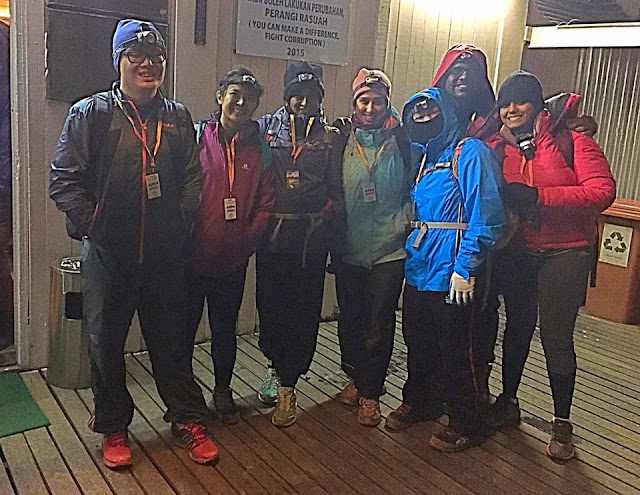 At 2:30am, we were rounded up by our guides Jasili and John and were briefed on the ascent. We were told to stick to the white rope, basically our visual guide to keep us from straying off the path in the dark and if there was mist. Sayat-Sayat hut was our checkpoint and we needed to reach it before 5am or else we were not allowed to go on.


A line of headlamps and colourful jackets was already paving the way up the mountain by the time we started at 3am. I was eager to get a move on because my legs were freezing as we stood outside Laban Rata. My only mistake on this trip was wearing one layer of compression pants for the summit climb. But once we started moving and scaling the newly formed route to Sayat-Sayat, my legs warmed up quickly and I soon fell into a rhythmic pace of step, step, step, breath, step, step, step, breath, trailing after Jasili, a friend and my sister. We had left our hiking sticks back at Laban Rata in favour of freeing up our hands for the rope section later. 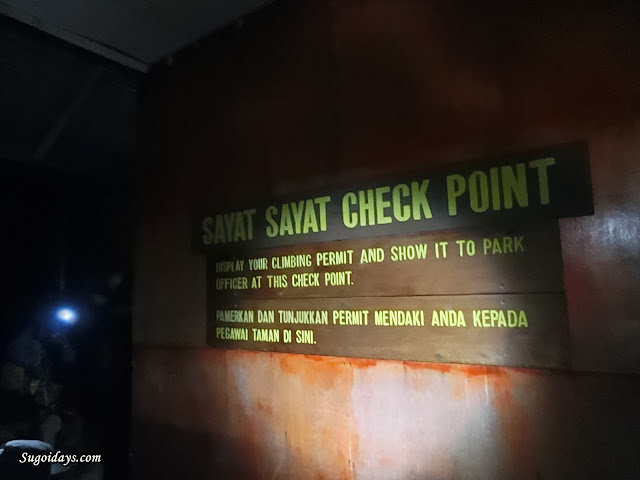 The only thing I could see ahead of me was what was lilted up by my headlamp, mainly my sister's shoes, the steps and occasionally her butt. We were practically nose-to-butt the whole way. Along the way, we saw people stopping on the side to catch their breaths and some hunched over with a case of acute mountain sickness. Now and then, when there was a break in the trees, I would look up to see the town of Kota Kinabalu still awake with its lights in a distance. Because it was pitch black, I had no idea what our surroundings were like and can honestly say the return trip to Laban Rata was astonishing.

We passed by a newly built platform where a lot of people had stopped to take pictures. I later learnt that the platform was built to honor the dead. The new route was an additional kilometer longer than the older route to Sayat-Sayat as it took us around the rope-climb area destroyed by the earthquake. We still had to use the rope to pull ourselves up the side of the mountain but it wasn't as scary as I imagined, liking it to walking up the mountainside while using my arms to pull me along. It did leave us winded for a bit but Jasili cautioned us to move along and not to rest too long there. We later realized that it was near the former rope climb section where a number of people died from falling rocks. 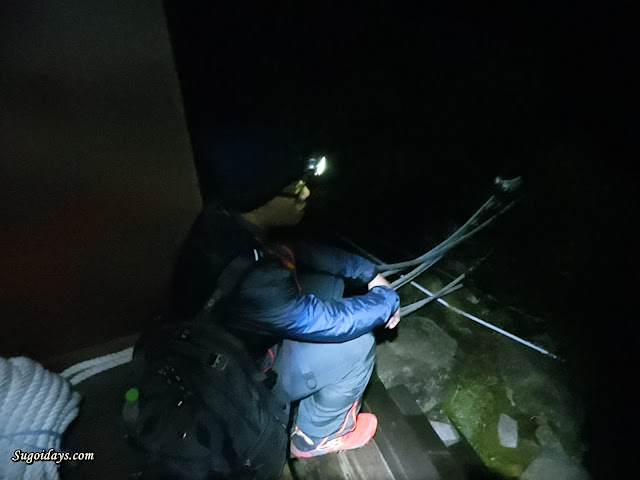 The slope up to Sayat-Sayat was gentle but riddled with slippery and uneven stones but as soon as we got to the hut, it was sweet relief. We had to show the ranger in the hut our tag/climbing permits where he noted down our time of arrival. 4am.

'Crap,' I thought. 'We are too early for sunrise. We'll freeze our butts off at the peak. It's Mount Fuji all over again!'

Fortunately Jasili shared the same opinion and told us to rest at the side of the hut for a while. I found that sweet spot where I was blocked from the ice cold wind by the hut and took the opportunity to guzzle down half a power gel. The chill started to bite at my legs again and seeing how I was jogging on the spot to keep warm, our guide urged us into motion. 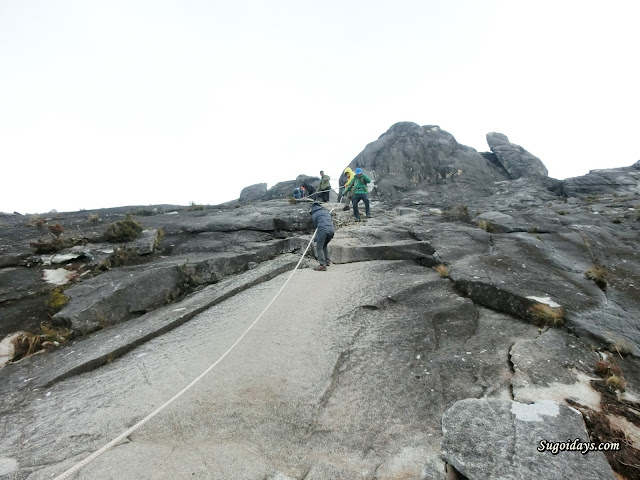 Once beyond the summit, the terrain became foreign, barren of plants, the route wider but no less gentler as the slope got steeper. Walking in a straight line following the white rope left our calves burning. Reading our minds (and our laboured breathing), Jasili started walking in zig-zags instead and that immediately help relieved the strain on our calves.

At the 8km sign, we took a break to catch our breaths. The air was very much noticeably thinner at this point. Above us, we could make out Low's Peak, our prize where a broken line of blinking headlamps indicated the first few to reach it that morning.

Rejuvenated, we continued our journey across the plateau and soon came to the foot of Low's Peak. The peak was once described as a mountain on top of a mountain and even though it was only 150 meters to the top, it felt like forever. We were climbing up on all fours but it was worth it because at 5:30am, we have reached the top of Mount Kinabalu.

Low's Peak was a small space with enough room for about five people to stand there without risk of plunging to their deaths beyond the barriers set up. When I got there, there was a group of people at the top undoubtedly waiting for the sunrise so that they can capture their victory shot with it. Had I been in my right mind, I would have snapped at them to move and get out of my victory picture but the lack of oxygen in the air somewhat sedated me and I simply gratefully handed over my camera to our guide to photograph the moment. 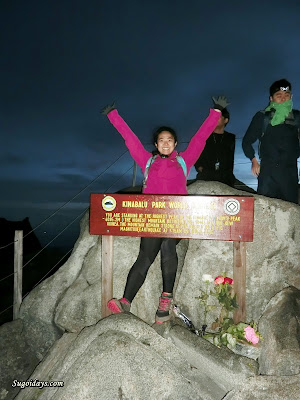 We found a spot just under the peak that gave us a stunning view of Low's Gully, a 1,800-metre deep gorge. In the distance just over the South China Sea, we could see the first rays of light peeking out from behind the clouds. A few minutes later, streaks of orange and red broke across the sky before they were blocked by the fluffy clouds carried in by a gust of frosty wind. 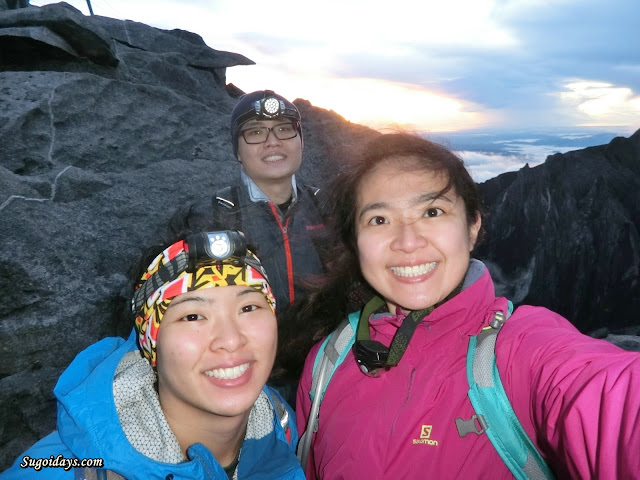 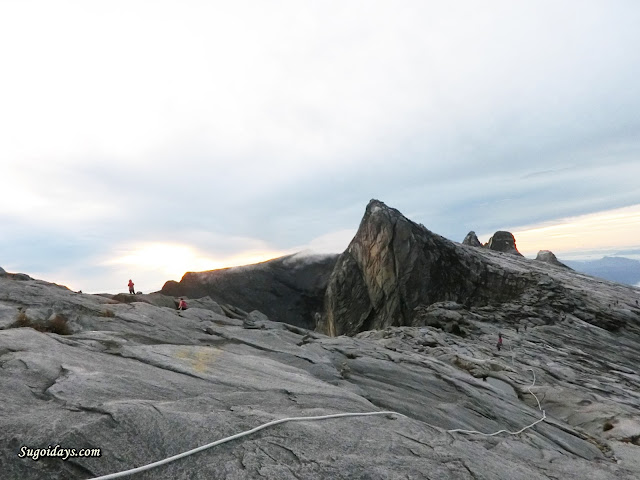 Spotting the hordes of people making their way up the peak at that point, we slowly descended to the plateau at a leisurely pace to take more pictures. Then in a distance, we spotted the rest of our friends finally appearing in the horizon like an action movie poster (minus the explosions) 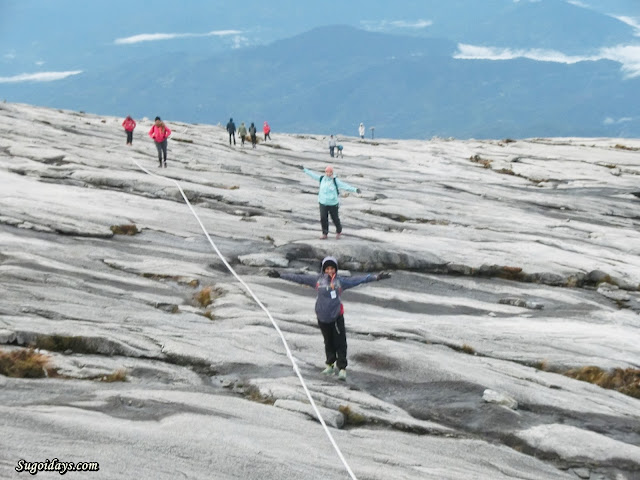 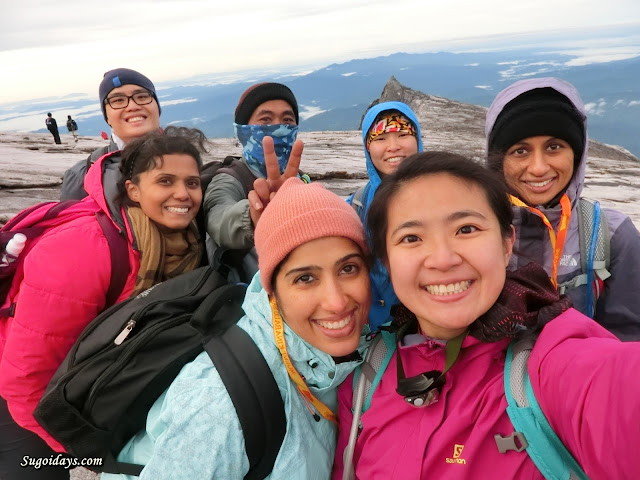 Several selfies later with them and the guides, we continued our gradual descent back to Laban Rata while they pressed on for the summit. With the sun out, we could see the summit of the mountain in all its glory. The steep slope of granite we had climbed up earlier looked like some foreign open land with ridges and peaks in the distance. 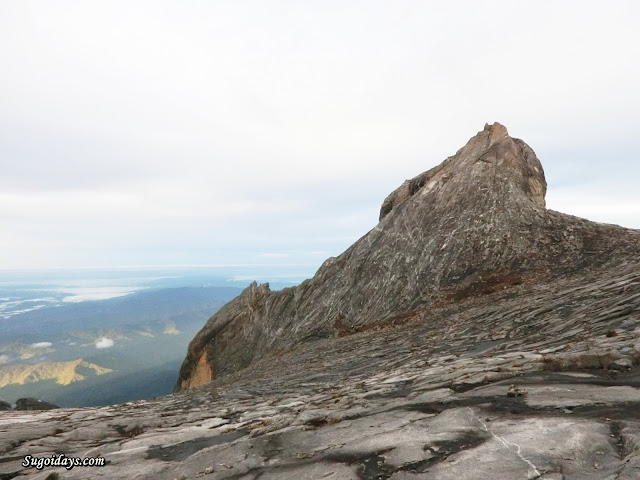 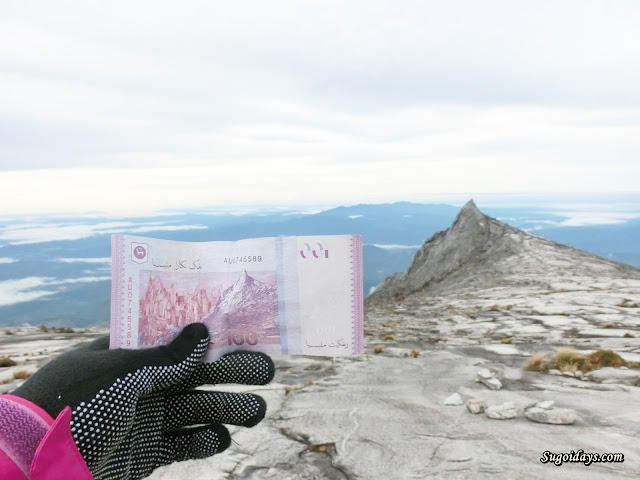 We could make out the famous Donkey's Ear injured in the quake exactly a year ago on 5 June 2015 at 7:15am. It was hard to imagine what it must have been like for those stranded by the quake to spend so many hours atop this place exposed to the cold winds and the harsh sun with no shelter. 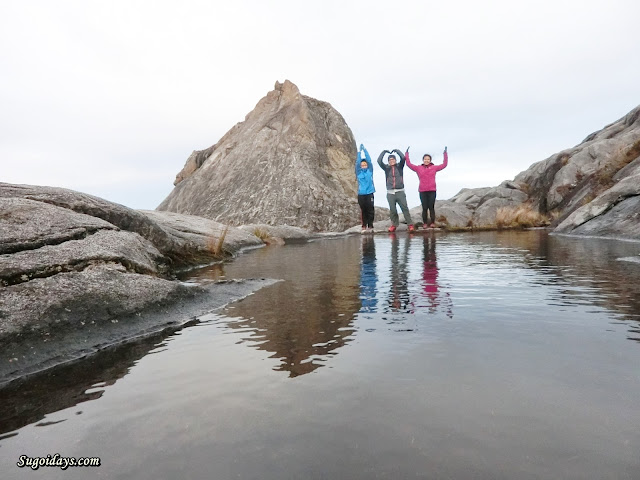 Natural disaster aside, there was something hauntingly beautiful about Mount Kinabalu that simply just left me in awe and extremely humbled. It was clear why the locals revered the mountain as Aki Nabalu' - the revered place of the dead.

On the return to Laban Rata, the age-old ache in my left knee made itself known forcing me to take it slow and to walk sideways on the plateau descent back to Sayat-Sayat to elevate the pressure. This however gave us an opportunity to take in the views we had passed in the dark earlier and as I aforementioned, the views were astonishing and breathtaking. 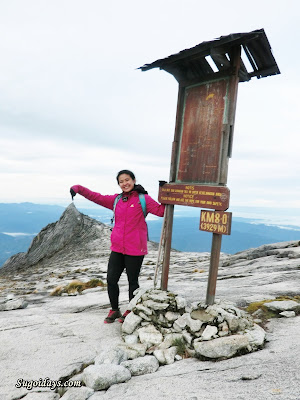 Looking back up, we could also see where the rocks had broken off from the mountain, hurling down onto the route and the huts near Laban Rata. The platform we had passed earlier was filled with people, guides and hikers giving their respects to the 18 lives lost a year ago. 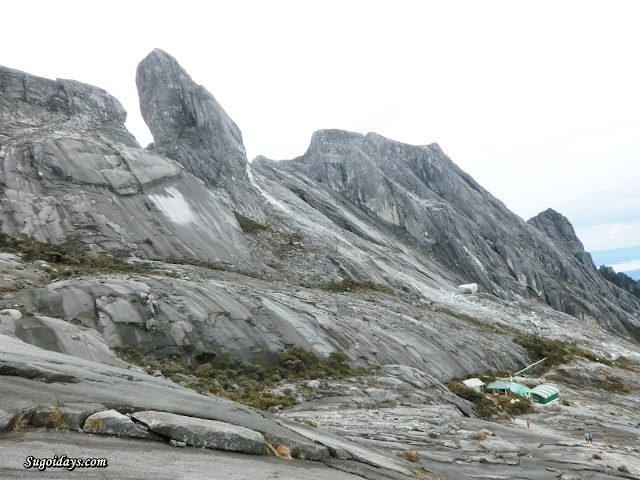 Back at Laban Rata, we dug into the breakfast buffet with gusto. At Jasili's advice, we managed to get in an hour's nap before packing up our bags and our friends' stuff to check out of Laban Rata by 1030am. Any later and additional fees would have been incurred. Once again, their timing proved impeccable as at 10:30am, the rest of our group burst through the entrance. 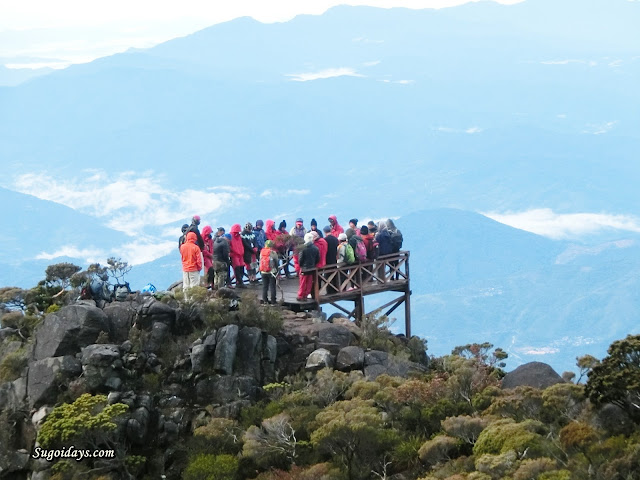 Our descent to Timpohon gate begun close to 12noon, later than the usual time to head down on account of the rest of the group returning from the summit so late and requiring time to recuperate. 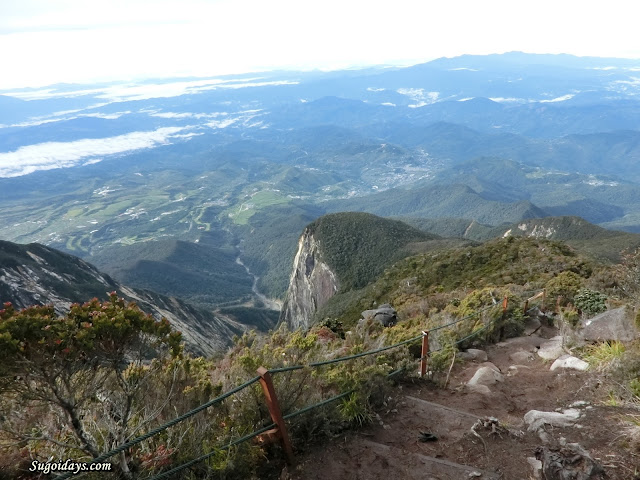 After three solid hours of downhill hiking under a couple of short rain bursts, my sister, friend and I reached the Timpohon entrance. Ironically the last stretch of uphill stairs to the hut gave us a nice reprieve from the monotony of the downhill. Upon checking in with the park ranger, we saw that further activities on the mountain for that afternoon were suspended due to the rain. 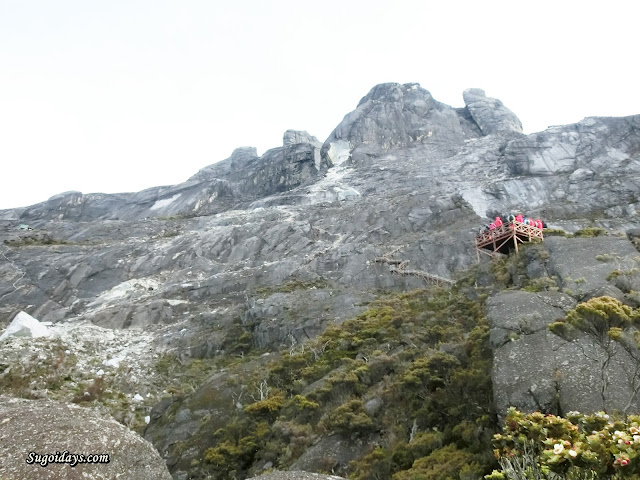 Hopping on to the earliest van about to leave, the three of us returned to the Kinabalu HQ to collect our group certifications and to warm ourselves up with a late lunch buffet at Balsam restaurant. Simple food and hot tea have never tasted so good to warm our shivering bodies, rapidly cooling down from the hike. Once again, we realised the difference between cost and value as we sipped on a cup of hot chocolate and honey tea each to wait for the rest of the group. 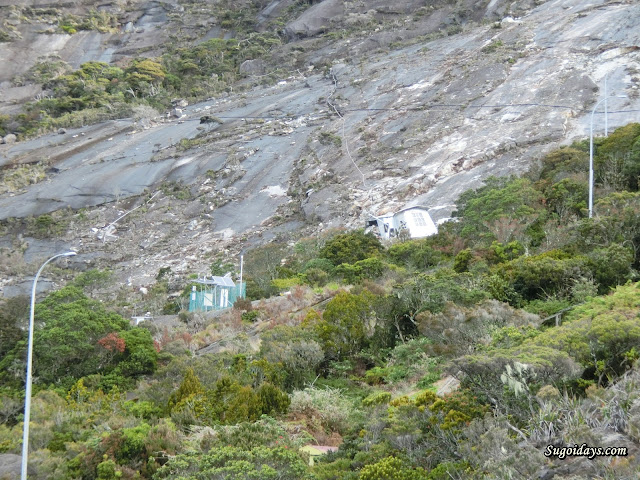 As the park fell to darkness, we got a bit worried when we heard nothing from the group after three hours but the power of texting and calling soon prevailed updates from the group. The rest of our group reached the headquarters at 7pm with the last person arriving with our guides and porter at 8pm. Muscle aches, the rain and nightfall had slowed them down drastically. The atmosphere in that moment was a mixed of relief that the ordeal was over, exhaustion and sheer eagerness to get back to Kota Kinabalu to check-in into our respective hotels for a night's rest. 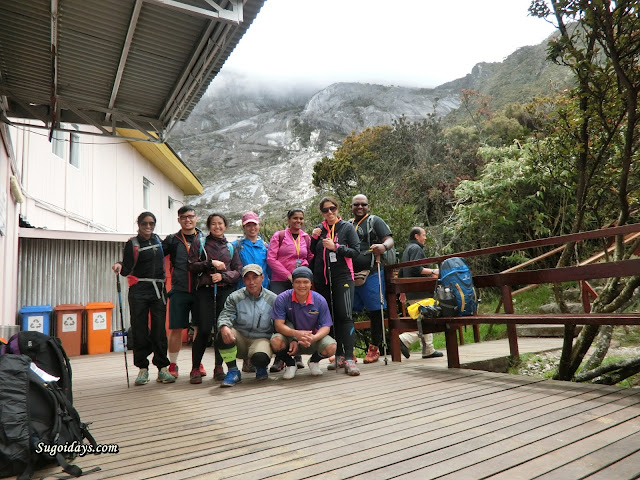 But before that, we thanked our ever dedicated and helpful guides, Jasili and John whom for the past two days, were our guidance and assurance on a mountain that was their home. We were all merely inexperienced guests to the mountain and it was only with their guidance, that we all made it up and down safely and in one piece. Relatively. 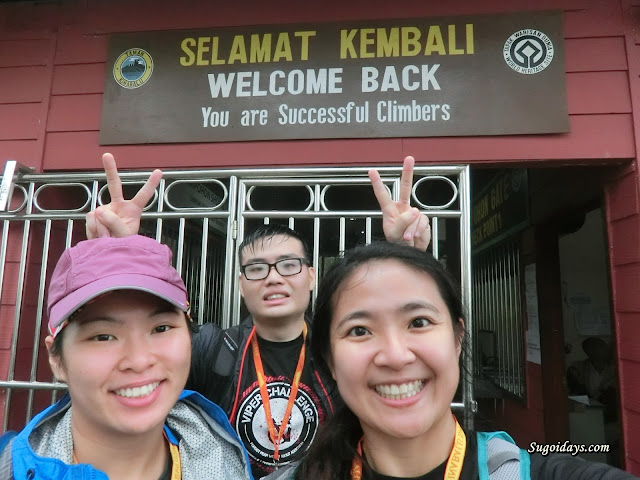 Three days post-hike and I was sure that I left my knee joints somewhere at the summit. It looked like a  return trip to the mountain was warrant in the near future to look for them.