Congratulations to Dirigo Events and Standard Chartered Malaysia as they continue their partnership for the next four years to continue bringing Malaysia what is deemed the best marathon event in the country!  On top of this exciting announcement, Dirigo Events also announced that official date of the 2019 edition - 28 and 29 September! Mark your dates because this event is expected to draw over 38,000 participants! 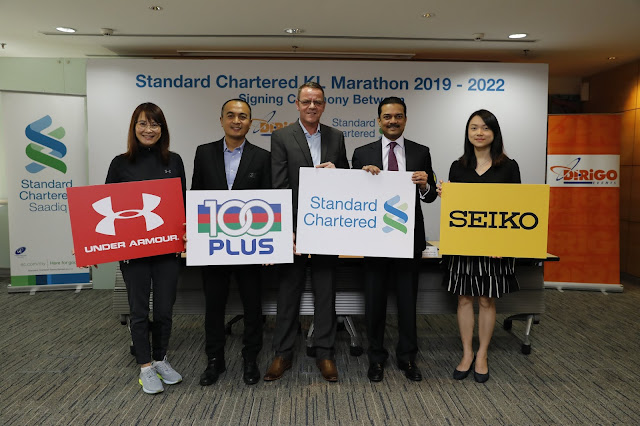 Standard Chartered has been the title sponsor of the event since 2009 and celebrated the 10th Anniversary of the bank’s involvement at this year’s event in April. The Standard Chartered KL Marathon’s (SCKLM) 10th Anniversary saw its biggest participation yet with 38,000 participants competing in 10km, Half and Full Marathon distances, with a 5km Fun Run and 1km and 3km Kids categories. The 10th Anniversary event also saw SCKLM being held over two days for the first time to cater to the growing number of runners, and this will continue in the next edition of the race.

The 2019 edition of SCKLM will also see the inclusion of new, as well as returning sponsors. SCKLM welcomes Under Armour and Banana Boat as first-time sponsors of the event. Seiko resumes its long-standing sponsorship while 100 Plus returns as beverage sponsor for the next 4 years.

“We are really happy to have secured our title and major sponsors for the 2019 edition of SCKLM well ahead of the event, which gives us ample time to plan and maximise the sponsorship agenda of our partners,” said Rainer Biemans, Project Director of SCKLM and Director of Dirigo Events. “As we persevere in creating a platform for running while bringing together communities to effect positive social change, it is heartening to note Standard Chartered’s steadfast support and confidence in the event and we are extremely grateful for their continued involvement, as we are of all our sponsors” he continued.


Congratulations and good luck, organisers as the entire nation waits in high strung anticipation for registration to open. Myself, family and friends included.
Posted by Tania at 10:00 AM