With the prices of smartphones rocketing into the thousands, it's hard to imagine a time when phones in general costed less than RM1,000. Enter Realme with its launch of not one but two new phones in to the Malaysian market yesterday. 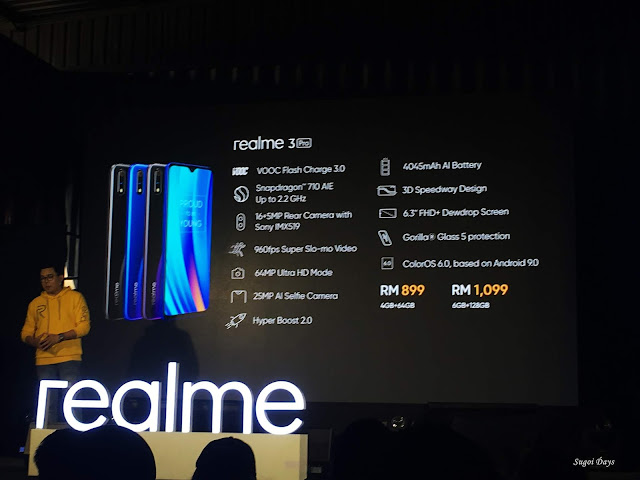 A 25MP front facing camera is fitted into the 6.2-inch Full HD+ display, protected by Corning’s Gorilla Glass 5 with a dewdrop notch. The 4045mAh battery comes with support for VOOC Flash Charge 3.0 fast charging tech. Its two back cameras are 16MB and 5MP units to allow you to record 960fps Super Slow motion videos and 64MP super-resolution shots.

Both spec variants are available today on Lazada and 18 May 2019 on Shopee and at authorized retailers.

Realme C2
On the lower end of the brand range and certainly more affordable is the Realme C2 which also comes in two spec variants. The cheapest model is the 2GB RAM + 16GB interal storage priced at RM429 while the high model is priced at RM499 with 3GB RAM + 32GB internal storage.

The Realme C2 comes with a 6.1″ HD+ Dewdrop full-screen display and it runs on a 12nm MediaTek Helio P22 processor. For taking pictures, the rear has a 13MP f/2.2 main camera and a secondary 2MP for depth effects. It has AI-assisted Chroma boost for optimised pictures and it is also capable of shooting full HD videos. In front, the Realme C2 features a 5MP selfie camera that comes with AI Portrait mode. It doesn’t come with a fingerprint sensor but it supports AI Facial Unlock.
Powering the device is a 4,000mAh battery and it charges via a microUSB port. Also retained is a 3.5mm headphone jack. Out of the box, the Realme C2 runs on ColorOS 6.0 that’s based on Android 9.0.
The budget smartphone will be available at authorised retail outlets across Malaysia beginning 18th May 2019. For online shoppers, the first sale is taking place at Shopee at 9AM on 21st May 2019.

Realme will also be having on going collaboration with a variety of brands such as 2D Bubble Tea cafe and MMM Stu6io Malaysia so follow them on Facebook for more updates.
Posted by Tania at 10:35 AM