2.5km into the race, I turned the corner into Jalan Raja Abdullah  and I could see those two giant yellow balloons bopping up and down in the air ahead of me. At this point everyone around me started speeding up, trying to overtake the 3:00 hours pacers. I did too even though the Chinese in me had already done the maths and I knew if I held my current pace, I would eventually overtake them anyway. 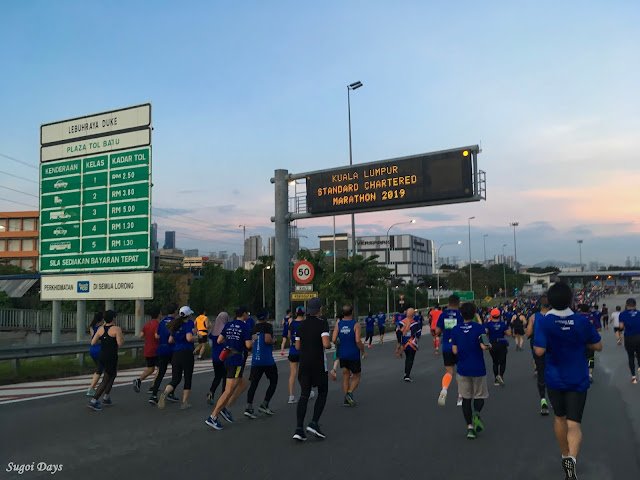 But the Chinese in me was also kiasu and I subconsciously ran faster and overtook the bopping balloons at 3km. My mind at this point was trying to calculate how on earth did I end up behind the 3:00 hours pacers. Then it dawned upon me: I started in Pen 4 aka the last pen of the Kuala Lumpur Standard Chartered Half Marathon (KLSCM) 2019. I was supposed to be in Pen 3. 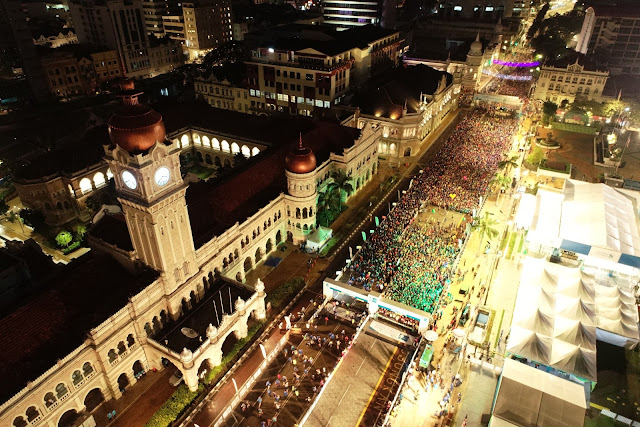 But anyway starting from the back does take the pressure off being overtaken and instead, I was the one doing the overtaking. It was kinda nice and stress-free. Until we had to a sharp turn at 5km and suddenly everyone was slowing down. At first I thought: a) it was another water station, b) someone got hurt and people was checking on them and c) we were merging with the full marathoners. Then it turned out, it wasn't any of the above.

It was a water puddle on the road and everyone was scampering for the sides to keep their precious shoes from getting wet. Say it with me: O.M.G. Sorry, the OCR girl in me couldn't take the zombie horde and took a giant splash in the puddle before turning the sharp corner into Jalan Tun Razak and continuing on my merry way.

Merry way, until the DUKE Highway stretch during which my brain basically went into autopilot to keep my mind off the charfing on my underarm. When will I ever learn? Try not to wear a new shirt before a run even though it was the official race shirt. I did like the slimming design of the women's KLSCM shirt by Under Armour though. But hey, one of the perks of being a girl is a higher-than-average tolerance for pain so I suffered silently.

Water and 100 Plus stations were ampleful as were the trash bins after each station so I don't know why Malaysians couldn't see them. Maybe the stress of running has led to selective blindness and a lack of common courtesy to throw away their cup, energy gels and banana peel. 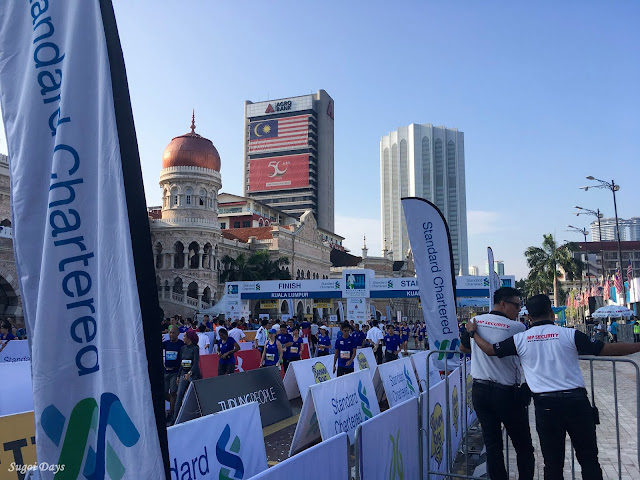 Everyone who asked me how was the half marathon got the same answer: it was so boring. I missed the Akleh Highway route. At least along that stretch, there was a nice view of the sun rising against the Kuala Lumpur skyline with Twin Towers. At some point, I wonder if there will ever be a route that would take us past Bukit Bintang area to the Berjaya Times Square and even though Petaling Street before hitting the ring roads and parks. Now that would be a real Kuala Lumpur run.

But of course, you will get all those people who has been living under a rock and has never heard of Malaysia's most prestigious and biggest running event who will kick up a fuss because this route would interrupt their night life. Oh boo hoo. 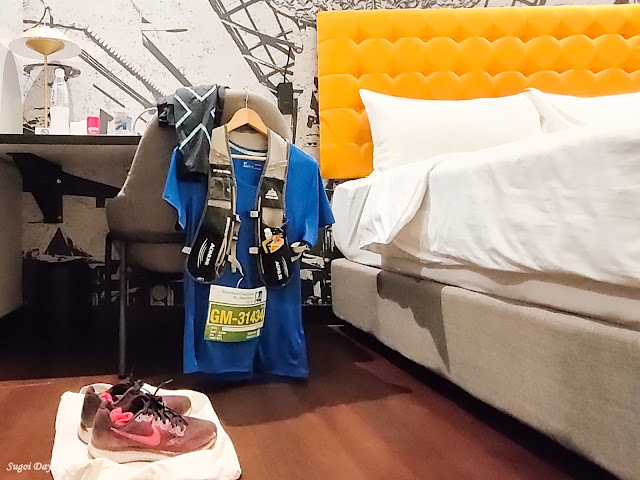 Coming back to my run, I remember cursing myself at the 10km mark as I could feel fatigue setting in at this point. That cold chill in the muscles as all I wanted to do was roll back to the start line. I quickly realised what I had done wrong. I hadn't finished my first energy gel because I couldn't stomach its thick texture 7km in and as a result, I was low on fuel. A quick dose of the very liquidy SIS gel (hello, sponsor please) quickly solved my problem.

And just in time too as I started feeling better at the first of many rolling hills along Jalan Tuanku Abdul Halim. That part was horrible but I somehow kept jogging. Overtaking people who were walking gave me the confident/egoistic boost I needed to keep moving until 15km in. The app on my phone (running watch out of commission due to strap) alerted me of my pace and I realised that if I didn't speed up, I would end up finishing past the 3 hours mark. Unacceptable!

So speed up I did. Miraculously, my legs didn't experience that usual tightening of the muscles at this point and actually held up the whole way and beyond. I attributed this to my consistent intake of 100 Plus four days before the race and of course, that one crazy leg heavy OCR training session earlier that month with a certain bald trainer.

As I closed in on the last 3km of my third half marathon of the year, the sun was spilling down on us, the birds were singing, people were walking and I was silently cursing the heat. Gosh it was hot. Better hot than haze, I guess. Whatever bomoh KLSCM hired to disperse the haze was well worth their price as it was the sunniest day of that entire week. The last 200 meters was the most serene running experience I've had in a long time. It was like my brain had fried under the sun and my legs were just floating me to the finish line rather than sprinting to the finish and vomiting out air after. It was a pleasant change. 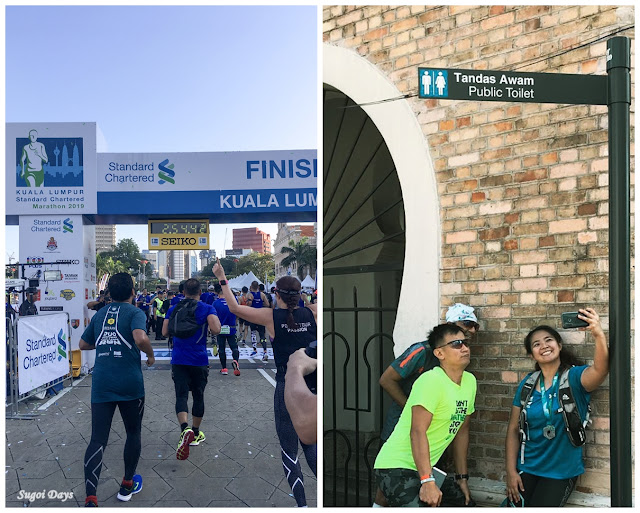 After 2 hours 48 minutes and 57 seconds of running, I was finally done. I collected my finisher medal and strolled to the media tent for a rest under the god-given shade. Then using the official KLSCM app, I saw that my marathon friends were slowly but surely trickling in and went off to wait for them under the burning sun. Aren't I a good friend?

It was amazing though how I managed to find any of them amidst over 40, 000 people. This year's event was the biggest and I have no doubt that KLSCM is well on its way to becoming an international level running event. Hopefully someday, it will be on par with Tokyo Marathon with ballot chances dropping to less than 1%. That would be the markings of truly big and well-loved run. 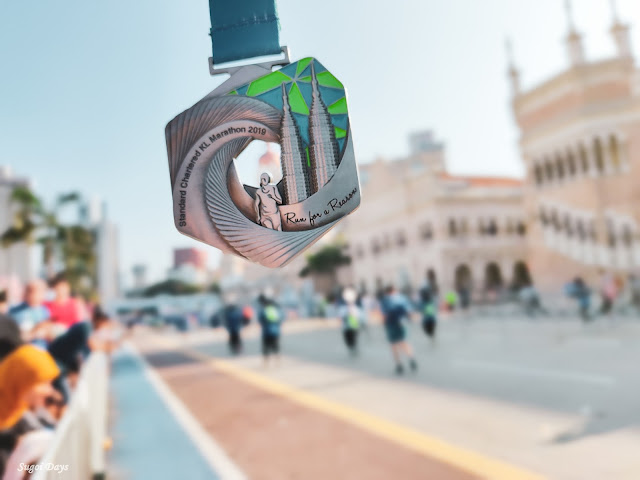 And I shall continue to wait every year for complaints and nonsensical comments to appear on the official KLSCM Facebook page so I may name and shame on my IG Stories. Follow me for great entertainment if you haven't already. If you're already following me on IG, hug yourself.

Once again to end my race review, here are my hits and misses based on my observations:

Pros:
1) YES, 100 PLUS is back as the isotonic drink of choice. (Last year was Lucozade, blehhh)
2) Punctual flag off time (a feat for Malaysia I assure you)
3) Practical tracking app
4) Enforcement of final COT for the marathon
5) Awesome playlist at Race Village (the DJ must be from my era)
5) NO HAZE

Rooms for Improvement:
1) ONCE AGAIN, runners did not throw their cups, sponge and gel packets into the provided bins.
2) No indication of number of tables at each stations resulting in runners crowding the first few tables like noobs.
3) Duke highway route was not as scenic as AKLEH.
4) Some stretches of the route was dark and cramp.
5) PWTC was horrible as the REPC venue. So cramp, congested and dimmed. The overall feel was...dated. Like backdated.
6) 100 Plus, why never give out complimentary drinks in the goodie bag at the REPC?
7) Traffic control and restrictions - for obvious reasons.
8) Should do like Tokyo and string up buntings and banners all over the city to remind people of this run. Because Malaysians can be selectively blind and ignorant as discovered.

Okay, I am done with my spill of KLSCM's 11th edition. See you next year.
Posted by Tania at 9:00 AM