There is huge untapped potential of a better world through movement. Firmly grounded in its founding ethos and mantra, “A Sound Mind in a Sound Body”, ASICS’ latest global brand campaign “#LiveUplifted” showcases the transcending impact of movement for both the body and mind.
Earlier this year, the campaign kicked off with a powerful series of content featuring a group of diverse storytellers who utilized the power of running to bring people together and uplift their communities through sport. In these videos, inspiring souls across the globe share their personal stories on how movement positively shifts their outlooks and perspectives on life. 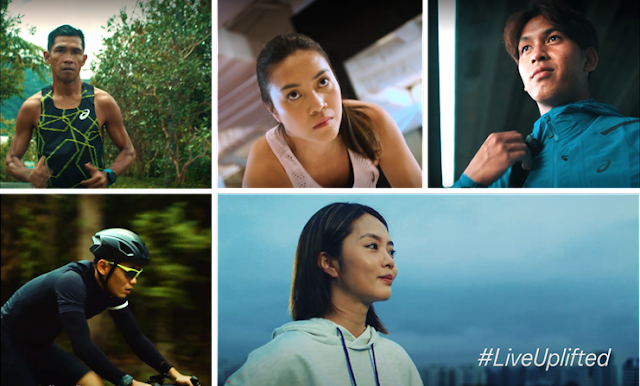 The driving force behind this campaign began with ASICS’ inaugural Global State of Mind Index in April 2022, which debunked the common perception that 30 minutes is the minimum amount of exercise required to experience the uplifting impact of movement. The brand’s new findings confirm that approximately 15 minutes and 9 seconds of movement is all it takes to feel mood-boosting effects.
In its continued journey to championing the benefits of sport and movement for our community, ASICS Asia Pte Ltd today launches new films featuring five of Southeast Asia’s most promising sporting personalities and celebrities, to unleash the power of movement in uplifting mind and body.
Conceptualised by Singapore-based creative agency Mill Stirling (Nofinerlife) and titled ‘Let Sport & Movement Uplift You’, this series of 60s and 30s regional brand films showcases what goes into the hearts and minds of persevering profiles as they champion the “Live Uplifted” philosophy.
In the films, Malaysia is represented by marathon runner Muhaizar Bin Mohamad, Philippines by national volleyball captain Abigail Maraño, Thailand by up-and-coming tennis sensation Kasidit Samrej, Vietnam by SEA Games swimming medalist turned triathlete Lam Quang Nhat, and Singapore by award-winning Mediacorp Artiste Chantalle Ng.
An army personnel by day, Muhaizar Mohamad is fondly recognised as one of Malaysia’s most talented and accomplished marathon runners. Since his foray into marathon running in 2013, Muhaizar has been a dominant force in the local running scene, representing the country across several internationally known competitions.
In a history-making win, he clinched Malaysia’s first marathon medal in 44 years at the 2017 SEA Games, and further defended his win at the subsequent 2019 games. Now 37, Muhaizar continues to show his love for the competitive sport with his latest appearance at the 2021 SEA Games in Vietnam.
These films explore how our state of mind affects our perception of the world. When we are down, the world may seem cluttered and unforgiving, but when we are healthy and uplifted, we view the world through a brighter, more positive lens.
As Gabriel Yap, Regional Marketing Director of ASICS Asia Pte Ltd explains, “At ASICS, we believe that the power of sport can generate an uplift, and movement transforms our mood and changes our outlook toward the world. With our Live Uplifted campaign, we hope to remind audiences that sport and movement goes beyond just a competition; it can inspire and transform you."
Over the course of the next few months, ASICS will continue to feature several South East Asia sporting and non-sporting personalities, diving deeper into what it means to “Live Uplifted”. An array of sporting products, apparel and accessories that allow sport to uplift you and truly embrace the movement will also be featured.
To view the film series, please click below:
· Regional #LiveUplifted Brand Film
· Muhaizar Bin Mohamad (Malaysia)
· Abigail Maraño (Philippines)
· Kasidit Samrej (Thailand)
· Lam Quang Nhat (Vietnam)
· Chantalle Ng (Singapore)

To follow the campaign, please visit: https://www.asics.com/my/en-my/mk/live-uplifted and follow #LIVEUPLIFTED on social.
Posted by Tania at 2:29 PM