It was a cold rainy evening and my sister and I decided to head over to Food Foundry, Section 17 PJ for dinner, simply because it was nearby, had good food and ample free parking. This little cafe has been around for the longest time and I just love their food and cakes so it only seemed about right that I dedicate a post to them.

I love their new quirky and cute deco. Sorry, no pictures because the lighting was bad and there was just so many people there. Think I have to get used to invading people's privacy for interior pictures in future.


Food Foundry is known for their mille crepe cakes but their food is quite good too especially their western and pasta dishes.

﻿
My sister had the Spaghetti Carbonara (RM18) and there was a generous helping of beef bacon slices and creamy sauce. The portion was just right that you don't get sick of its creaminess after licking every last drop of it.

I opted for their duck confit pasta (RM19). It's like aglio olio with dried chilli and duck meat. Make that very tender and juicy duck meat. Considering it's a meal saturated in oil, the pasta is not at all oily and goes down quite nicely.

During a previous visit, I had their dory fish pasta which was like a combination of grilled fish and carbonara. I was initially a bit wary when it comes to fish because I once ordered their pan-fried fish with cream sauce from their old menu and the fish came out smelly. At least they were nice enough to change my order then. But when I ordered their new fish pasta, it was really good and I definitely recommend it too.

As it was a Saturday night, both lots of the cafe were crowded with people and the cake counter was no different. I went to see for myself what cakes they had and there was a trio of girls making their order. There was also an auntie who kept giving me the glare because she thought I wanted to jump queue. Chill la, lady. I just wanted to take pictures of their counter.
﻿
﻿
﻿
I don't know if it was because I had a bite of the strawberry mille crepe cake first or because I had latte to drink but my vanilla crepe cake was, well, tasteless. The texture and creaminess was the same but I just could not taste anything! My sister tried it as well and commented that it wasn't as sweet as it used to be but was still nice for someone who was not me with an insane sweet tooth.


Well, tasteless cake or not, Food Foundry still has the yummiest cakes, desserts and food in the area. The quality may not be consistent but just let their friendly waiters know and they will be more than happy to do something about it, be it change your order or take it off your bill. 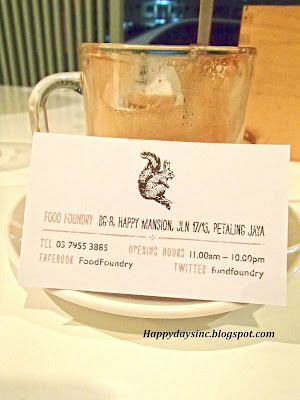 *Not a paid review. Every comment and rant is the writer's own.
Posted by Tania at 12:00 PM