Rise of the Guardians movie review

Call it what you will: Childhood Icons Assemble. Avengers Holiday-edition. Pre-teen Avengers. But all similarities to the teaming-up idea aside, I actually enjoyed Rise of the Guardians. Thankfully I managed to watch it the day it came out in the cinemas. 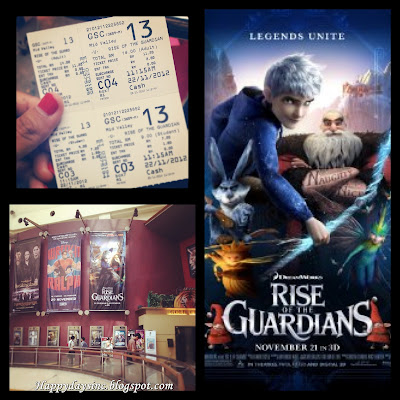 Online reviews have been going on and on about this movie was banking off the superhero team-up concept that was Marvel's Avengers and how it failed to live up to DreamWorks' previous movies such as Shrek, How to Train Your Dragon and Kung Fu Panda. Perhaps their expectations were sky-rocket high which was why Rise of the Guardians fell short in their books.

But not in mine.

Told from the point of view of the lesser known (but a very hot) Jack Frost voiced by (the equally hot) Chris Pine, the movie brings together the Big Four childhood mascots; Russian tattooed Santa (Alec Baldwin), the Tooth Fairy (Isla Fisher), the Australian Easter Bunny (Hugh Jackman) and a mute Sandman. Basically reluctant hero Jack is looped into helping the Guardians protect the children of the world from the Boogeyman (Jude Law) in exchange for finding the purpose to his existance.

﻿
﻿
Verdict
As predictable as the storyline was (remember that their intended audiences are children), each character has their own quirky appeal. Hugh Jackman as a grumpy sarcastic bunny in all his Aussie accent is a definite treat for his fans. I sort of half expected claws to protrude from Mr Bunny's paws halfway. The banter between Bunny and Jack resembles old frenemy and brings well-timed playful humour to the movie. 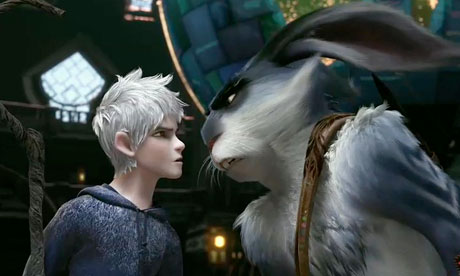 Russian Santa, North plays the leader of the Guardians and is aided by, not his elves but rather big and furry Yetis to create toys all year round. Alec Baldwin nailed his role with a Russian gusto, offering a somewhat immature but fatherly figure to the dysfunctional family of the Guardians. Obviously the producers and director trusted their guts on throwing in the 30 Rock star.

Despite not uttering a single word throughout the whole movie, Sandman was just a glowing thing to watch out for. One moment, he can be sweet to you, the next you're like a light. Piss him out and he goes all kinky Hulk of Golden Sand on you. You just have to watch to see what I mean.

The Tooth Fairy scenes were my least favourite simply because she looked more like a flying fish rather than a fairy and that comes off as creepy. But I do like Isla Fisher and one of her little helpers - Baby Tooth was just adorable!
﻿
But what I really liked about the movie was the interaction between Jack and the villain Pitch. Both myths with different perspectives and reactions to being ignored and forgotten by the children who fuel their existence in favour of the Big Four. It adds in the lesson that a person's greatest enemy is in fact themselves.

Would I watch it again?
Yes. The visuals of the worlds and character designs are colourful and so animated I wished they were real. Even though I caught it in 2D, I have read reviews commenting of how this movie was designed for 3D and therefore is beautifully created to draw you and your kids into this world that all of us once believed in or still do. So I wouldn't mind rewatching it in 3D.
Rise of the Guardians is a light-hearted movie that reminds everyone, adults and children alike that it is never too late to keep our imaginations alive as only our bodies grow old but not our minds. Kids will enjoy this movie and adults, you will too if you take it for what it is. A unique, fun-filled storytelling of a childhood we all once had. (In other words, don't go into this movie expecting Inception)

One more thing....
Director Peter Ramsey must be a fan of anime. More specifically, Tite Kubo's Bleach. Why else would the main character of Rise of the Guardians resemble a certain white-haired, green-eyed, ice-wielding captain who is undoubtedly the coolest character in the Bleach-verse in all sense.
﻿

At one point in the movie, I really wanted to Jack shout 'Bankai!' and go all superpowered/dragon-enforced on Pitch but alas, I remembered I wasn't watching Bleach.

Note: I am trying my best to be unbiased in this review but it was tough because I am a sucker for hot guys, fictional or not.
Posted by Tania at 10:02 PM