Rumour has it that the end of the world was postponed for another 500 years after The Powers That Be found out that Comic Fiesta 2012 was to be held on 22 and 23 Dec at KL Convention Center. So if you think about it, Comic Fiesta saved the world.

I have been going for Comic Fiesta for the past 4 years, thanks to my cosplaying cousin from Kuching and it has become some sort of a tradition for me and my sis now. Why? Because Comic Fiesta is the only place where I can unleash my inner otaku without judgement! This year, I decided to try out as an volunteer blogger and was selected along with a few others like Jane and Matilda. Check out their blogs ya!

I was up at 5am on the first day of Comic Fiesta because I am that gungho! I had my last bootcamp session of the year that morning. By the time I reached KLCC, a long line had already formed outside the hall at 730am.
﻿﻿﻿﻿

By 830am, the line had extended along the pathway to the shopping mall. This only serves to prove the growing madness that was Comic Fiesta. Can't say I was surprised though considering the impressive line up of acts and international VIPs scheduled to appear (you will see).
While snapping pictures outside, I bumped into two of my former high school mates. Teo Elaine (in the middle) was Comic Fiesta's Head of Art so all the banners, stage designs and artworks that caught your eyes were all her and her team.
﻿﻿﻿﻿﻿﻿
﻿﻿
As soon as the doors opened at 10am, early-bird ticket holders flooded the halls, many of which were diehard Anime, Comic and Game (ACG) fans and cosplayers. This year's booths had so many things to see, do and buy! Sigh, there goes my hard-earned cash....

﻿
Taking to the stage once more as emcees were the comical duo, Shaun and Alfred. They kept the crowd entertained and rolling on the floor in laughter throughout the event with their thinly-veiled crude jokes and antics. I heard plenty of batang and bola jokes on both days from these two ...sweatdrop....

Comic Fiesta was officially launched with a beautifully made video featuring Coffy and Mirai Suenaga. I was definitely impressive the quality of work and creativity placed into the video! Very worthy of an Iron Man anime!. Check out the video below:
Local bands Alien Dork Fuse(ADF), Divine Reborn and Temjin then took to the stage and warmed up the crowd with their melodious renditions of familiar anime songs such as from Rurouni Kenshin, Doraemon and even Power Rangers! I grew up with those songs!...Damn I feel old now.

﻿
There was also a group cosplay competition and since the theme of Comic Fiesta this year was 'End of the World', each team had to put on a skit with that particular theme. Their performances were interesting, some super hilarious and I admired the effort they have placed into their skit. My personal favourite was Team Syok Sendiri who played out the R-rated anime version of the PowerPuff Girls, Panty and Stocking. (Er, minus Panty who was probably doing you-know-what-if-you-watch-the-anime).
﻿﻿
﻿
Speaking of cosplayers, here are some of the awesome cosplaying I spotted while wandering around on the first Day 1. Got to admire their commitment to their characters and the detailing of their outfits!﻿﻿
﻿﻿
﻿
Danny Choo finally took the stage in the afternoon! Yay! I enjoy watching Culture Japan. Keeps me motivated to visit the country one day. He has never been able to make it for Comic Fiesta previously so it was a huge deal to have him here this time! He talked about a number of things including his latest series, Japan Mode and choosing a career path that you love and not because society tells you to. That's good advice, one that I follow personally. 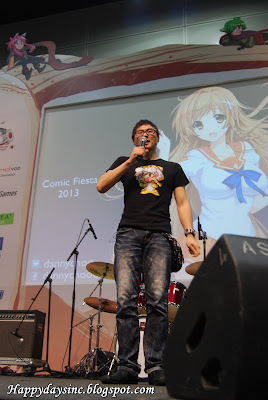 Danny wasn't the only mega celeb at the event because the next special guest was Supercell's RedJuice, the man behind the character designs for latest hit anime, Guilty Crown especially Inori and Tsugumi. After Redjuice answering some fan questions, Shaun and Alfred opened to the floor to a quiz session and participants were tormented rewarded with Redjuice's signature!
﻿﻿
﻿

Now as Shaun and Alfred were banned from throwing things into the crowd, they invited Redjuice to do so instead with a Comic Fiesta 2012 T-shirt. With everyone waiting in anticipation and ready to pounce, Redjuice threw the shirt. And guess who caught it.

﻿
Yup, yours truly. Here's a narrative of that moment:
"Must get pictures for my blog. Snap snap snap. Oh, look. He's throwing the shirt....Look at it fly....turning in midair....why is it falling towards me? Why is my hand reaching out? Hey, look, I caught it. Ow ow ow!"

Got nearly crushed by the horde of people behind me but it was worth it! Hehehe. Best first day of Comic Fiesta ever.

Unfortunately I couldn't stay for the concert because I was dead tired but from what I heard, it was a killer performance by the sibling band.

Day 1 of Comic Fiesta was, for a lack of a better word, EPIC!

﻿
I got to meet a lot of friends, old and new, see Danny Choo and Redjuice live, took loads of pictures of sporting and dedicated cosplayers and went on a mad spending spree.

And it only got better on Day 2. Read on here!

For more photos, head on over to my FB album here: Comic Fiesta Day 1