﻿
I have not watched Genesis of Aquarion or any other mecha anime since Gundam Seed/Destiny, Gundam 00 and Macross. In terms of Japanese artists and bands, I was more familiar with works of TM Revolution (Rurouni Kenshin, Gundam Seed/Destiny OST) and UVERworld (Bleach, Blood +, Gundam 00).  I still have them blasting from my playlist now and then.


My mom was once quite puzzled by my liking for Jpop music.
My mom: Why do you even like this song? You don't understand what they're saying.
Me: It's like speaking in tongues (Christians will know). You don't understand the words but you can feel its meaning in the music. It speaks to you. (yes, i really said that with a straight face)
My mom: .......

After starting work, my interest in anime dropped. Then I also caught the recent Oppa Gangnam style Kpop fever because we kept doing Kpop dance routines in my dance classes so my Jpop fan-girl kinda took the back seat for a while.

But when I heard that bless4 will be appearing at Comic Fiesta 2012, I was intrigued especially by the excited reactions of CF-ers. Who was this band anyway?, I wondered.

﻿
An all-sibling group consisting of Akashi, Kanasa, Akino and Aiki, bless4 initially started out as part of the martial arts performing group called the Flying Dragons from Arizona. As a result of their upbringing in the United States, they are fluent in both English and Japanese. With performing experience under their belt, they ventured into singing together. Akino made her solo debut with 'Genesis of Aquarion' and 'Go Tight' for the anime, Genesis of Aquarion. It was a major plus point in my book that she collaborated with Yoko Kanno on several songs because I am a huge fan of Yoko Kanno! Wolf's Rain and Vision of Escaflowne anyone?

I had a listen to 'Genesis of Aquarion' and became quite addicted to it. It made me download the anime. I was unable to make it for their concert during CF though but from what I heard and saw on Youtube, it was a stellar performance by bless4 despite a few technical problems.

During their meet and greet session on CF Day 2, I was definitely sold on how nice and down to earth they were in person. The emcees, Shaun and Alfred had given them a berth of the stage and the siblings instead invited the duo to join them in the spotlight (aw... what a way to win the hearts of your fans).

At the request of their fans, they performed 'Genesis of Aquarion' acapella-style followed by 'Jingle Bells' with their fans singing along. Video can be viewed at this link.

﻿
Their Q&A session was entertaining and insightful as they spoke about working closely with each other as siblings and helping Akino and Aiki pursue their solo careers. I don't know if my sisters would be that supportive of my writing career but I am sure they will be my best critics....


Q: What do you think of Malaysia so far?
That's an easy question. The food is awesome, the people are awesome.
We haven't try the durian yet though but we have tried roti canai and we loved it!
(The emcees offered to take them for Bak Kut Teh for a real taste of Malaysia next time.
I seconded that)
Q: Why Bless? We know 4 is four people. But how about Bless?
Through our music, we receive a lot of blessings from our fans. And we want to give out our blessings to the people who have supported us in the form of our music as well.

Q: How do you guys cope with each other?
Aren't you bored seeing the same friend, same family and same people?
Aiki: Working with your siblings is a blessing but when I was a teenager, I hated them.
I couldn't have my private time. We share the same circle of friends and we seldom have the
time to go around alone. There was even once when we were on a train,
we all sat in different carriages. But after that we never sat apart.
Akino: We treat each other as friends and we share our stories with each other.
Akashi: I have something to share of us growing up together. There was this time when Aiki and Akino fought.
They were 4 and 6 then. Aiki punched Akino in the stomach and Akino got so angry, she slapped him back.
(Aforementioned siblings began re-enacting the scene)
Aiki punched her again and Akino slapped him again. This went on for a
number of times until Kanasa had to step in to stop them. As punishment, our parents
made Aiki and Akino hug and kiss each other while saying 'I love you' fifty times!
At first, they did it reluctantly then eventually they started to cry.
From then on, we never fought. Even Kanasa and I.
Kanasa: Because we didn't want to get that kind of punishment too!
(neither would my sisters and I...*shivers*)
~.~.~.~.~.~.~.~
Limited copies of their album was being sold at the official CF booth, Coffytiam on day 2 but I was too broke by then to afford it. I missed out on personally meeting them and getting their signatures that day!
(Argh! (╯°□°）╯︵ ┻━┻)
﻿
Anyhooooo, I managed to get my hands on their latest album 'Yume Tsugumi' much later on and I currently have the album on repeat on my playlist. The song, Yume Tsugumi (Dream Weaving) is undoubtedly my favourite. Even though I can't understand Japanese 100%, that song just brings tears to my eyes everytime I listen to it. It is just so beautifully haunting. The English version is also available on the album and I am still trying to memorise the lyrics.
The rest of the album was terrific with a blend of rock, pop ballads and R&B in both English and Japanese. Even though Akino and Aiki are the more recognizable siblings and are often the lead vocalists, Akashi and Kanasa easily hold their own with their smooth and melodic vocals. Beside Yume Tsugumi, I also hooked on 'Around and Around', 'Agare!', 'My Sunshine', Beat Love, Genesis of Aquarion ....
You know what, consider me hook on bless4! I am officially a bless4 fan now! (and like any hot-blooded female, I may have a tiny tiny tiny crush on Akashi...just a tiny one!)
I hope to see more works from them whether in anime OST or a new album in the coming year. Because I can't get enough of their music now. And the next time, they come to Malaysia, I'll definitely be in the front row. With durian and Bak Kut Teh.
Oh, by the way, today (31 Dec) is also Akino's birthday. 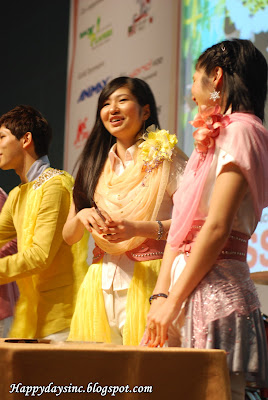 Happy Birthday, Akino!
May 2013 be a rocking year for bless4