I am a manicurist's worst nightmare. Short, broken nails on one hand, long, brittle ones on the other. I should just wear gloves 24/7.

Fortunately Phoebe, my manicurist at Sommerset Nails & Waxing was understanding when I explained to her that I was an outdoorsy person and very rarely took care of my nails. Heck, I think even my tennis racket gets more TLC than my nails.

I was lucky to be able to try out Bangsar's Sommerset Nails & Waxing salon thanks to Hot magazine. I was allowed to bring one other person with me so I opted to drag invite my mother along for a girl's day out. Like me, my mother also very rarely sets foot into one of this beauty parlours and has never gone near any form of waxing (other than candle wax). So this was the perfect opportunity for her to try bikini waxing. Yay.....(she begged to differ) 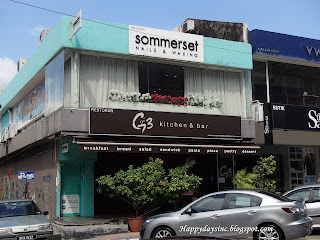 The salon is located in the heart of Bangsar, a walking distance from Bangsar Village 2 and is right above a corner restaurant called G3. Its light teal coloured entrance is hard to miss and the window front gave the illusion of a white-picked fence garden with flowers. The immediate interior is elegantly simple and spacious which is important especially after you have your nails done and need to move about...um, weirdly. The waxing rooms are located behind for privacy and that was where my mother was led to for her first ever bikini wax.

Wax on, Wax off
As it was her first time, they opted for the hard wax as it was gentler on the skin and doesn't hurt as much. To quote my mom, "I didn't even realise when it was finished. There was no pain and not at all uncomfortable." She also mentioned how experienced her wax therapist was, being able to put her at ease as she walked my mom through the process. I am so proud of you, mom for doing this!

Women have a higher tolerance for pain due to our nature-given ability to, you know, give birth so naturally having hair removing by wax should be a breeze.  But if you are terrified of the pain, just let your wax therapist know. They have ways to get your mind off the pain and to make the experience as painless as possible. But again, it depends on your threshold for pain.

My mom was done in a quick 10 - 15 mins and settled into the waiting lounge to wait for your truly because my mani-pedi took much longer.

The Mani-Pedi
Overall, it was a comfortable 1 hour 30 mins treatment without having to move from pedicure station to manicure station. Phoebe was very efficient and meticulous with trimming and shaping my toenails first before applying OPI's 'Teal the Cows Come Home' to them. I think she was very amused by my baby toe nails because they were so tiny that it probably only took a drop of polish to colour them.

Then as my toenails dried, she moved onto my fingernails, first checking the length on them and then advising me that it would be best to trim them short as it is easier to maintain for an active person. Hey, you're the expert so trim away, I told her. It was nice having a manicurist who does not bark at you every minute to relax your wrist. For my nails, I selected 'Red My Fortune Cookie' from OPI and I love it! The fiery red complimented my teal coloured toenails very well.

Verdict
I enjoyed my experience there and my mom did too, considering that this was her first bikini wax. I found the service quite good as they served us tea before and during our sessions and my manicurist was very pleasant and experienced. Judging by the flow of steady regulars pouring in that day, I would say Sommerset already has its loyal clientele.

If I were to pick at something, I would like a little privacy during my session as I could hear (and see) the lady next to me talking about her breast pumps but I distracted myself with the television.

Pricing, I would say is reasonable as you can have a bikini wax at RM29 onwards and a ManiPedi at RM65 onwards. It's recommended to make an appointment two days prior so that you can pamper yourself at your convenience.