You were the man in the Mission Impossible series, Vanilla Sky, War of the Worlds and Minority Report. Your portayal of a fat balding man in Tropic Thunder was hilarious. Then you did this....slow excuse of an action movie. Was it a quick means of cash? Or a way to start up another action hero franchise despite being Ethan Hunt. Because Jack Reacher....was just...meh. 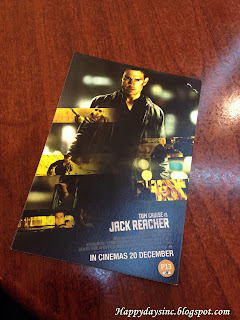 Thank you, Nuffnang for the chance to watch the premier screening of Mr Cruise's latest action movie, Jack Reacher.

Verdict
The movie started out with the shooting as seen through the scope of the sniper. It reminded me of the PS2 version of Time Crisis 2 when they had the sniper option for gamers. The opening was a horrific reminder that an ordinary day can make a turn for the worst. But from there, the movie heads down hill. The movie alone was reminder that not all action movies are fast paced and exciting.
﻿﻿Overall I felt that the plot was weak which was a pity considering that Reacher was the main character in a whole line of books by Lee Child.  It was dreadfully slow with a lot of pointless conversations and situations that seemed to be designed to emphasize Reacher's swag. Like him walking in just as the authorities was at lost as to how to track him down.

There are a lot of elements to this movie that is just predictable. You have the hired enemy sniper whose skills supposedly rivals the main character, the mysterious Russian mastermind, the mole on the good guys' side and the damsel in distress with daddy issues. For a conspiracy movie, it doesn't dive into the conspiracy part much. I came out of the movie with question marks all over.

For me, the saving point would the mix of humour during the action scenes. There are small injections of quips and sarcastic remarks from the characters that elevates dire situations. As for the action scenes, as rare as they are, weren't too bad. They resembled live action Counter Strike or Modern Warfare games and the thugs aren't instantly killed with a single headshot.
Would I watch it again? Nope. Now excuse me while I overdose myself on a Mission Impossible marathon to remind myself what Tom Cruise should look like in an action movie.