"Holy crap! That is a lot of blue!" *I'm blue da ba dee da ba die*
﻿
﻿﻿﻿﻿After disembarking from our flight, our first class treatment continued as we exited the immigration hall and found the resort representatives waiting for us with welcoming smiles. From there, they relieved us of our suitcases and guided us to the airport jetty. While my sister and I were gawking at the boat and the clear blue Indian Ocean, we were given face towels to freshen up after a long flight and refreshing cold coconut water.

The boat ride to Huvafen Fushi took approximately 25 minutes which flew by in a flash because we were too mesmerised by the sight of endless blue water, interrupted only to isolated island resorts. For those without sea-legs, anti-nausea wristbands are available onboard.
﻿
Soon Huvafen Fushi loomed into view and we were greeted by the General Manager himself, Marco and our Thukuru, Ali and Nahu (personal butlers). Ali drove us to our Lagoon Bungalow in a buggy and gave us the tour of our home for the next four days.
﻿
We have a stunning view of the blue blue ocean from our awesome bathroom and also from our bedroom/living room/kitchen. The patio opened up to a day bed, our private swimming pool and a deck leading down to the sea.
﻿
The resort had also prepared a complimentary bottle of champagne and a serving of bread, olive, ham and cheese. That was a nice touch!

﻿
After our luggage were delivered to our room, we Superman-changed into our swimsuits and was taken on a resort tour via buggy. Wheee!
﻿﻿﻿

﻿﻿The island itself isn't really that big and everything is within walking distance with sandy pathways leading to every corner of the island resort.  The pathways are shaded by strategically planted trees and bushes that also provide privacy for the Beach Bungalow residents. The best parts about the beach bungalow are that you literally have a beach in your backyard and everything else is just a stone's throw away. All together, the resort has 44 bungalows consisting of the beach bungalows, ocean and lagoon bungalows as well as the beach and ocean pavilions for bigger groups.
﻿
﻿
There are four main restaurants that specialises in different cuisine types; Celsius, Raw, Salt and Fogliani's as well as a bar (UMBar) and an underground wine cellar, Vinum where you can wine and dine to your heart's content. More about the resort food offerings in the next Maldives post (yup, as a typical Malaysian, I am dedicating one post to food).
﻿﻿

﻿﻿﻿Right next to the swimming pool and restaurants, Huvafen Fushi has a library/entertainment lounge called The Lair. Bright, homey and spacious, guests can rent DVDs, borrow books and surf on the computers. They also have XBox and PlayStation 3 console sets for the kids, teens and young adults. Coffee and tea are available at hand for guest's consumption free of charge.
﻿﻿

﻿
Huvafen Fushi holds bragging rights for having the first underwater spa in the world called Lime. Apart from the usual relaxing body and facial treatments at above-sea level, guests can also have their massage or body scrubs in treatment rooms several meters underwater. We asked to see the underwater spa and the resort was more than happy to accommodate us in the afternoon. Nahu showed us the spa at night and boy, was it a different world in the glow of the underwater spotlights.

After showing us around, we were taken to the water sports center, Float, where we were fitted with our snorkeling equipments by its jolly manager, Peter. Peter then took us through the house rules when swimming around the house reefs to ensure that we don't accidentally step on them or hurt ourselves. They offer parasailing, jetskiing and many other motorised water sports for a fee. Non-motorised sports like snorkeling and kayaking are complimentary although some will require licenses to prove your qualification. For the exercise nuts, there is also a gym (Pump) and a yoga pavilion that overlook the ocean that comes fully equipped with water bottles and towels. 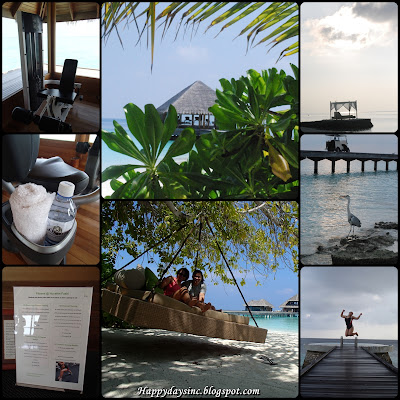 Over the following four days, my sister and I were treated to a relaxing and heavenly lifestyle, a far cry from the KL life we were used to.  Time slowed down to a crawl as we filled our time with a variety of activities at our own leisure (things to do there, coming soon in Maldives Part 4!).


The staffs there were friendly and approachable, greeting us along the pathways and going out of their way to ensure that everything was okay for us. The management even extended our checkout time from 12pm to 8pm simply because our return flight was near midnight! Now that's I call superb treatment!
It's no wonder that the resort name, Huvafen Fushi means 'dream island' in their national language of Dhivehi. It definitely felt as though we were living the dream.

Bed and breakfast prices start at USD1450 per night as stated on their official website. Alternatively, you can also make your booking via Agoda or Atollparadise for special offers.
Posted by Tania at 3:22 PM

These work great. I used them for anti nausea bracelet.I would use it for my trip to lake tahoe. Its a long road trip!Looking foreword foreword for more anti nausea bracelet To solve your nausea in the natural way you can choice our product.Our Anti-Nausea wristbands may be used to relieve nausea symptoms due to chemotherapy cancer treatment, morning sickness, travel/motion sickness and vomiting.