Let me start by saying when it comes to food, Malaysia still takes the cake. No questions asked.

Don't get me wrong. Food in Huvafen Fushi was delightfully sinfully delicious but having said that, the ala carte dishes are not cheap (once converted from USD to RM). The buffet breakfast was inclusive with the accommodation but unless you go for full-boarding or half-boarding, then you're on your own for lunch and dinner.

Concerned that fine dining every evening might burn a hole in our pocket, I did a little pre-planning before the trip that involved checking out the resort restaurant reviews and bringing our own instant meals and snacks. Over the following four days, we wined and dined on a budget whilst in style.

(Warning: the following pictures may induce stomach acid, growling tummies and salivation. View at your own torment.)

Upon arrival in our beautiful lagoon bungalow, we found a plate of hors d’œuvre waiting for us. After a long flight and 30 mins boat ride, it was a nice treat of cheese, olive, meat and bread.

﻿
After the resort tour and a day of snorkeling, we dug into our super cheap mee-in-a-cup at only RM2 per cup and washed it down with the complimentary bottle of champagne. With our feet dipped in our private pool and the oceanic view before us, it felt like a million dollar dining experience anyway.

﻿
The breakfast buffet was held at Celsius, a casual dining restaurant with talcum fine sand for its floor and an outdoor patio that overlooked the blue Indian Ocean. The buffet carried a limited but mixed array of western, Japanese and Chinese dishes that varied from day to day. The egg station doubled as a pancake and waffle station too. I had to practice self-restrain to keep from myself from over-indulging on everything there.

One tip I learnt to avoid holiday weight was to start off my buffet meals with fruits. Luckily Huvafen Fushi breakfast buffet had a station solely for fresh fruits such as rambutan, mangosteen, vanilla-soaked pears and cinnamon-apples. In fact, the only fruit missing from the selection was the durian. I guess it was too much for Westerners to handle. If you like, you can select a few fruits and have the chef blend them together to make a yummy healthy drink.

﻿
I mixed up my breakfast, taking one out of everything and by everything, I mean food that I don't usually get often. One of the more memorable dishes from the buffet was the Maldivian curry laksa. The glass noodles was crunchy while the curry was thick, suntan-filled and hardly spicy. There was also ample chicken pieces in the curry for a meaty bite.

We had breakfast on the outdoor patio on the second day and had to bare the scorching hot sun to get stunning photos with natural lighting. But the real treat came swimming past in the form of a pack/flock/school of reef sharks and several other fishes swimming back and forth along the water edge. Now that was a sight you don't see everyday or in any other city in the whole world. We ate so much at breakfast that we could afford to miss out on lunch or snack on our Malaysian-bought snacks.

For day 2 dinner, we ordered in or as the resort called it,in-bungalow dining. Now this was when a funny incident happened. My sister ordered the Male fish curry (Don Riha) and chicken pizza. Less than 30 mins later, our order arrived and we dug into the Male Fish Curry which came with rice, chapati with mango chutney and kuliafilla salad. There was also a bowl of Caesar salad which we initially mistaken for the kuliafilla salad. Half way through the meal, I realised the staff must have misheard Chicken pizza as Chicken Caesar salad. Apparently pizza sounded like Caesar.

However the Male fish curry more than made up for the mistake as the portion was big enough for two and the fish was fresh and well cooked in the curry. It is possible that the fish was caught fresh from the ocean. The remaining champagne did well to wash down the thick curry. The mango chutney complimented the thin chapati well and I really wish there was more. A basket of bread rolls also came with the dinner and we used them to lap up the curry. Total bill was about USD62. 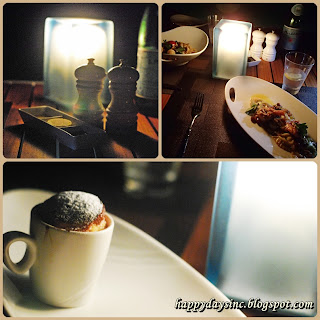 On our final night in Maldives, we decided to splurge and headed to Celsius for a under-the-moon dinner. And what an ambiance it was, with the ocean crashing in the pitch black background, dim lighting to set the mood and music gently strumming from the live band. If this was Malaysia, we would have been driven indoors by the humidity, heat and mosquitoes. But it wasn't.

To start, we had the smoked mackerel tartare with beetroot, pear and almond dressing. Honestly, It was...weird. Two bites and it was gone. Not because it was super delicious but because it was a rather small portion. The mackerel reminded me of tuna with mayonnaise. Hm, maybe it was something a top notch chef would appreciate but not this little Malaysia girl.

﻿ My sister ordered the orecchiette with duck and chantarelle ragu, vine ripe tomatoes and pecorino. In that one sentence, there are three words that made me go "What?" This dish was actually shell-shaped pasta with duck and mushroom sauce, tomatoes and italian ewe cheese. And it was an unexpected form of comfort food. The orecchiette soaked up the duck juice beautifully while the duck meat was succulent.
﻿
I had the goat cheese ravioli, seared prawns, pine nuts, raisins, golden brown butter and parmesan. Colourful was the word that came to mind, even though you can't see it clearly in this picture. And at first bite, it was a flavourful explosion of savoury and sweet and a nice mix of textures from the nuts and parmesan. The ravioli was cooked to perfection and the goat cheese just came oozing out, complimented by prawns and raisins. The restaurant manager dropped by to check on us and unfortunately I was having a heavenly mouth-orgasm from this dish to answer him properly.

After the main course was done, our souffle with orange, macadamia, Baileys and vanilla ice cream came. Based on hours watching Masterchef and Top Chef, I know that souffle has to be eaten instantly or else it will loose its heat and collapse. Pictures were taken swiftly and with that we dove in. The hot souffle simply melted in my mouth and I could taste the distinctive taste of Baileys in the soft gooey texture. The orange topped off the ice-cream with a refreshing citric kick.

Total bill for dinner came up to less than USD150.

Couples can opt to have their romantic dinner by the swimming pool where the floor of the pool resembled stars in the sky or at UMBar. Nearby a chef will whip up a fresh meal on the grill. While waiting, they can go for the buffet line. 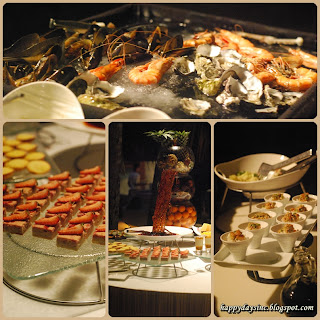 All these good food would have caused us to pack on the weight but surprisingly we didn't. I suspect it was because we kept ourselves occupied during the trip with numerous activities which I will go into in the next and final Maldives post.

You may wipe that trail of drool off your chin now.

To be continued in Maldives Part 4.
Posted by Tania at 4:02 PM