Beer has never been my thing. I am not like some people who can chug it down glass after glass or bottle after bottle as though it was water. The funny thing is, my parents are beer drinkers and my sister can be called beer connoisseur (she can taste the differences in all beer brands) but me? One sip and I want to chop off my tongue. I suppose I just can't handle the taste. 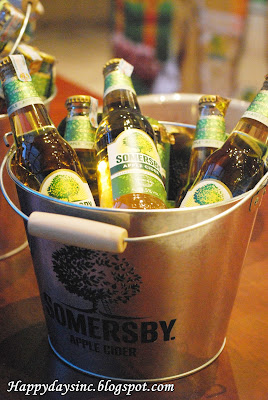 Which is why when Somersby Apple Cider was brought to Malaysia in July 2012, I was sure I found my new best friend. The launch was held at La Bodega, Pavilion where my dance studio was invited to perform a flashmob. Three times. It was super exhausting.You can read about it at my fellow dancer's blog here. Thank goodness for the bottomless supply of apple cider after the performances.

About six months later after the launch, Somersby decided to give away RM10,000 worth of prizes to their loyal drinkers customers. After a month long 'count the apples' contest on Facebook, those who guessed the correct amount were invited to the finale event at Limoncello Bristo & Bar, KLCC. 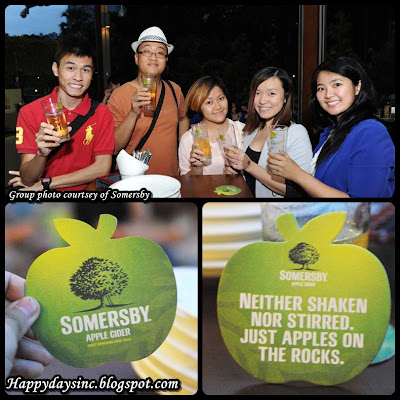 The event was scheduled to begin at 730pm but by 7pm, early birds were seen sipping on their first pint of cold apple cider. I met up with Senri and Serge and like three weasels, started eying the prizes and plotting who to murder/bribe butter up to in order to win.

Glasses of Somersby started to accumulate on our table as the night wore on and we were joined by Senri and Serge's friends. Bola jokes were thrown back and forth every time the waiter came by with meatballs and deep fried cheese balls. All I can say is, Serge really liked his meatballs.We were also served with canapes, pizza and panna cotta which looked like cheese with tomato sauce... but it was good!

Sorry, No pictures of our food because we were all too busy inhaling it to catch up with our drinking.

Somersby's brand manager, Mr Yee gave a speech, thanking everyone present for their continuous support before proceeding to draw out the lucky draw prizes. Apart from gadgets and shopping vouchers, RM200 vouchers were also given out to those who wanted to donate to a charity of their choice. 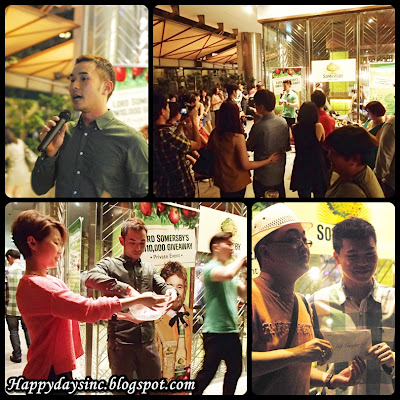 As you can see, I was not one of the lucky ones so to console myself, I tried drinking enough glasses of Somersby to make up for my loss. Because Somersby only contained 4.5% alcohol, I managed to tuck in about 7 glasses before the event officially wrapped up at 10pm. First time ever a booze event concluded early...

We were all given four bottles of Somersby each as door gifts which got Senri, Serge and I a fair amount of stares on the way home in the LRT....

With Chinese New Year around the corner, you can stock up on your Somersby from Carrefour, Giant , Aeon Jusco, BIG, Jaya Grocer, Tesco and Mercato. For more information, just drop a comment on their Facebook page here: Somersby Malaysia.

With the festive season on the way, this will be a great time to start stocking in the somersby.