I am so excited that Iron Man 3 is finally coming out at the end of this month! It has been a ridiculously long year since the Avengers and finally Tony Stark (Robert Downey Jr) will be gracing our screens once more!

As the first movie to kick off Marvel's Phase Two movies, Iron Man 3 will have Stark facing off again the Mandarin (Ben Kingsley) who destroys Stark's personal life and Iron Man suits. Left with only his instincts and brain, Stark must find those responsible for the attack while discovering the answers to the question "does the man make the suit or does the suit make the man?"

This is going to be an exciting movie based on the many trailer releases as we will get to witness many designs of the Iron Man suits in action including the Hulk Buster and Iron Patriot. Most interestingly is that Pepper Potts (Gwyneth Paltrow) too will be doning on the Iron Man armour. Whether it is Stark's or her own remains to be unanswered.
﻿﻿
Did you know that in the comics, Tony designed a suit specifically for Pepper called 'Rescue'? (Because roses and cars are too mainstream presents for Stark). An aptly named suit if you ask me.

﻿
Tony also designed a suit for good old Spidey with cool mechanical arms. It would be epic to see this suit in the movie but then we would all pass out from 'Iron Man/Spiderman awesomeness' overdose and miss the whole movie.

Now if I were best buds with Tony Stark, I would have him customize my very own Iron Man suit with inspiration from Strike Freedom from the Gundam Seed anime series. In addition to the iconic Iron Man repulsor blasters for flight and firepower, my armour suit will be equipped with several detachable remote controlled shooters that can engage various targets from multiple angles and directions. When not in used, the shooters will form wings on the back of the suit for additional flight speed.

It will also come with a lightsaber for close-quarter combat and additional guns mounted to the back and to the hips for more ammo.

My Iron Man armour will be made from the same vibranium material as Captain America's shield as it is light and can absorb blows and direct hits whilst protecting me. I will also include a special beam-deflecting coating (made from millions of mirrors) to the armour that automatically deflect beam-based/laser attacks and return it to my assailant. Let's see them try to sneak up on me from behind now!

And of course, JARVIS. What is an Iron Man suit without reliable JARVIS? 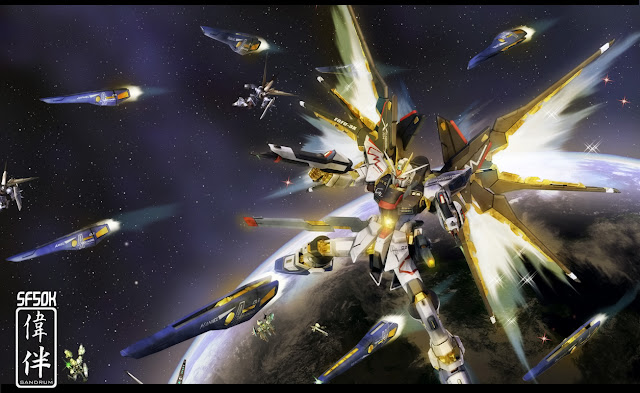 The result should look something like this in red and gold to live up to Tony Stark's penance for flashiness and I shall call it.......wait for it.....

As it will be as indestructable as the handphone brand it is named after.

Well, ir might be just me and my imagination running wild but this would definitely be Iron Man my way.

Iron Man hits the big screens on 26 April 2013. But until then, enjoy the trailer: