Pet Project 2013 came and went just like that. I really wished it was a monthly event but I think all the volunteers, the organising commitee and founder Sabrina Saw will be dead tired on their feet if it were. You cannot imagine the amount of planning and preparation that went into pulling off this massive event all in the name of animal welfare and for that, I applaud the entire Pet Project team and the teachers and students of The British International School of KL. Well done, guys! 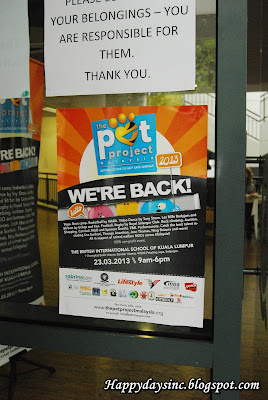 Only two years old, the event that brought together animal welfare and fitness was held on the 23 March 2013 at the British International School of KL and saw an estimate of over 1200 attendees by noon to participate in an array of fitness-oriented activities and workshop as well as to purchase food and items for a good cause. All proceeds raised in this event were donated to several animal welfare organizations and shelters.

SPCA and Malaysian Independent Animal Rescue (MIAR) held an adoption drive where several of their shelter puppies and kittens were adopted on the spot. Yay! While it was great having the younger ones taken into new homes and families, it was still heartbreaking to see the older animals still stuck in their cages with their pitiful gaze looking out for the person to whom they can devote all their love to.

I am the owner of four beautiful and unique mix-breed dogs and xx number of cats (all adopted from the shelter and streets) and no word can describe how much joy and laughter they bring me everyday. They are the reason why I strongly stand for 'Adopt, Don't buy!'

While I may not be able to adopt those up for adoption at Pet Project, I hope the little contribution I made by purchasing the coupons helped. Coupons were used on that day to buy entry into their assortment of workshops ranging from golf to basketball to yoga and finally to dance.

For those concerned about injuries or their individual fitness performance, Urban Wellness had a booth there where you get an expert to teach you on how to warm up properly and which part of your body to focus on to improve amongst other areas of expertise. They have a very impressive state of the art spa and treatment center in Clearwater, Damansara Heights which I highly recommend checking out. Trust me, I've seen the place and it made my jaw hit the ground. More info on Urban Wellness here.

Now, there was one event I was looking forward to and that was the Dance Masterclass with Tony Stone, choreographer for the King of Pop, Justin Timberlake, Beyonce and Chris Brown to name a few. I have an undying passion of dance and to learn from the great man himself was really something I looked forward to for months. A huge supporter of animal welfare and everything charitable, Tony Stone held the class pro bono just like the previous year and we only had to pay RM30 (15 coupons) to take part in his class.

Mindful of the big group of participants this year, Tony conducted the class in an easy and fun manner that allowed everyone to pick up the moves with no problem. It didn't matter if you were a kid or an adult, klutzy or coordinated. What was important was that we all tried. His energy was infectious, his friendliness inviting. The supposedly one hour session became an hour and a half and we were burnt exhausted when it ended. I wonder how much calory I lost doing the routine repeatedly.

To wrap up Pet Project 2013, I camwhored with Tony, something that amazed even the great man. To quote my friend and fellow blogger, Senri of Journey of the Little Biscuit, "Self-shot is more "heng" because asking other people to take was too mainstream."

Once again, hats off to the Pet Project team for pulling off this event and thank you for allowing me to help out in the only way I know how, through my blog. I hope to work with you guys again next year!

For more pictures, drop by my Facebook page here.

If you missed this event and want to find out more about animal welfare, just click on my 'Animals matter to me' page.