On Mother's Day, the family went to Burgertory after debating between steamboat buffet and pork burger. Obviously in my family, the latter was an instant choice. We got there at about 7pm and thankfully the crowd hasn't come it yet. 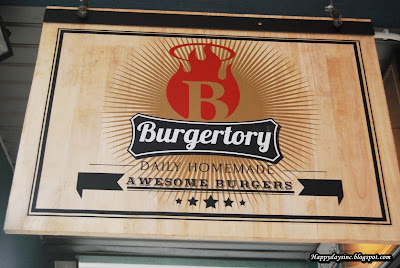 William, one of the founders was the friendly face behind the counter and he was helpful in making recommendations to my mother. I already knew what I wanted from all the blogs I've been reading. 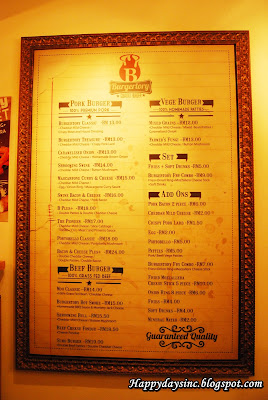 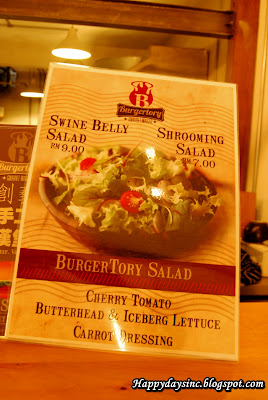 While there was the option of ala carte, we ordered the three burgers sets and a salad from the extensive menu of pork, beef and vegetarian burgers. A burger set comes with fries, onion rings, meatballs and a free flow of soft drinks. Orders are made at the counter and we quickly seated ourselves at the long table which the Burgertory crew had built themselves along with the rest of entire restaurant. 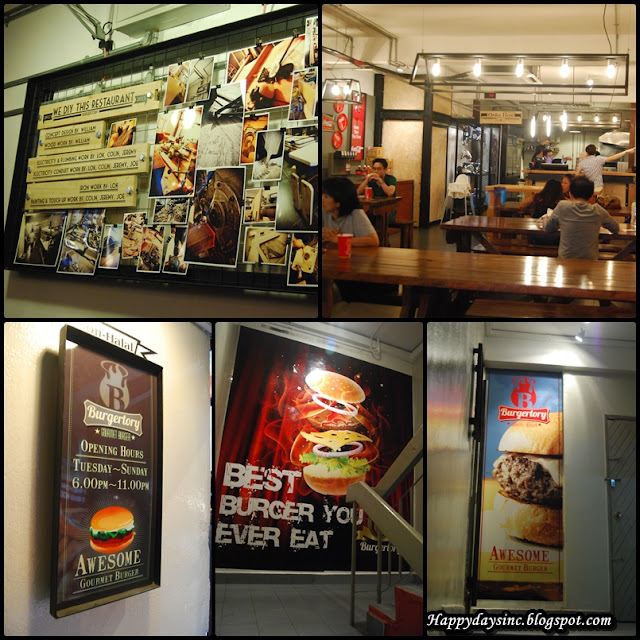 The entire place was DIY by the crew members from the wood work to the plumbing to the lighting to everything else that goes into making an eatery. As you enter, take note of the board to your left that tells the tale of the sweat and hard work that went into building Burgertory. 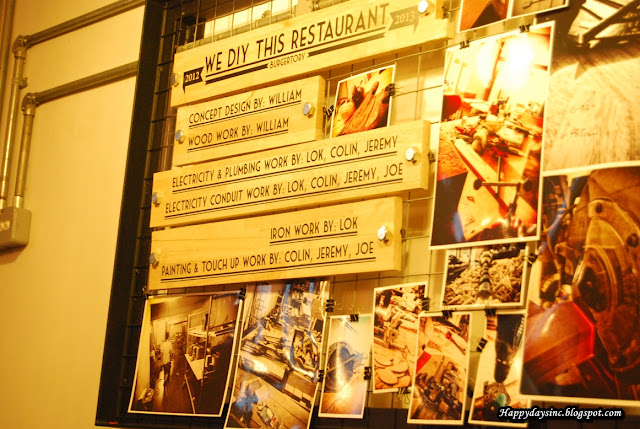 I ordered the Burgertory Treasure (RM13) which was indeed a treasure due to the crispy pork lard bits hidden between the thick pork patty and oozing cheese. It was quite a funny experience because when I was snapping pictures, I couldn't find the lard bits at first and nearly threw a shit fit my mother had to double-check with William to be sure. William brought it back to the kitchen to check and returned minutes later. It turned out that there were bits inside but it was so well hidden that I missed it. Oops. My bad.

Anyway, he was nice enough to top it up with additional lard bits and I was a happy girl once more, munching away at my juicy burger. Thumbs up for superb service.


Sister had the Caramelized Onion (RM13) and judging by the way she was gobbling it up, it was a win. According to her, the onions were sweet and juicy that went well with the cheddar cheese and pork patty.

Being the health nut that she was, mum had the Swine Belly Salad (RM9) and ordered the Mascarpone Curry and Cheese (RM15) for dad, following William's recommendation. While the salad was fresh and laden with fatty swine belly, the mascarpone curry burger was definitely the winner of the night as it came with a juicy thick pork patty, cheddar cheese, fried egg and delicious mascarpone curry sauce. It was nice change in pace as the curry added an extra kick to the already -flavourful patty.


Compare to other burger joints, the burger size is rather small and the buns weren't as fluffy as I would have like it but Burgertory's pork patty more than makes up for it with a thickness that had me struggling to widen my mouth wide enough to grab a bite. Succulent. Thick. Juicy with a hint of pepper. Definitely a winning factor for me over the other burger joints I've tried.

We were stuffed by the time we walked out of the buzzing-with-business restaurant. A huge crowd had come in while we were there and tables were limited. Burgertory is not as widely known as some places (yet) and I am thankful for that because that would mean I can get my pork burger fix without having to queue an hour.

Parking might be a challenge on weekdays when college students are out and about but on weekends, if you come before 7pm, you will be munching on your burger in no time.