At the risk of sounding like a crazy fan girl, all I have to say about the latest installment of the Fast and Furious saga was awesome! After two years since Fast Five, Justin Lin once again takes the helm of bringing together a behemoth of a fan-service movie that features the imposing presence of the Hulk and Captain America Vin Diesel and Dwayne Johnson paired with several stunning beauties. Oh and the female leaders weren't too bad either with Michelle Rodriguez back from the dead as Letty Ortiz. 'You wanted her back, you got it,' was probably what Lin was thinking during the pre-production of the movie. 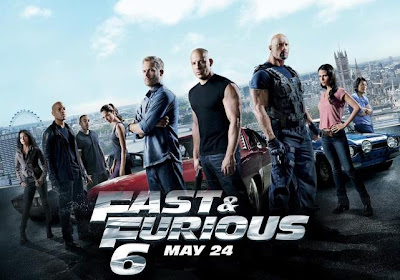 For once, the movie exceeded or matched the high expectations set by the trailer with the good blend of witty-lines, high-octane car chase and racing scenes, fist-pounding fight scenes and several heartwarming situations between characters.

Gist
The movie picks up months after the fifth movie with Dominic Toretto (Vin Diesal)'s team retired from a life of crime with the millions of dollars from their last Rio heist. As internationally wanted criminals, they are unable to go home to the United States and newly-fathered Brian O'Conner (Paul Walker) and Mia Toretto (Jordana Brewster) are forced to start their new family on foreign grounds. However an opportunity soon comes knocking in the form of Agent Hobbs (Dwayne Johnson) who offers them a chance at freedom in exchange for their expertise and help in bringing down rogue British soldier Owen Shaw (Luke Evans) and the very-much alive Letty, Dom's former lover.

Verdict
Let's face it. The plot was fairly predictable, the action sequence over-the-top, the cast easy on the eye, several minor plot holes (including the explanation of Letty's memory loss) and the acting and delivery of dialogue expected of actors who are comfortable in the skin of their characters. The saying 'leave your brain at the door' rings true for this movie. But by golly, I could leave my brain at the door many times if that was the case. At the end of it, there was just something about the Fast and Furious saga that had audiences coming back for more and this sixth movie is no different.
I have more or less grown up watching the entire film series and in doing so, have gotten to know the characters. Understandably, there was not much one could do with a movie involving cars and the decision to transit to the heist genre was a wise one. In doing so, they were able to draw in new audiences while keeping their faithful fans hooked for more Dom and Brian behind the wheel.

Dwayne Johnson merely ups the dynamic of the group and enhance the bromance between Dom and Hobbs and Dom and Brian. And watching them tag-team each other against the bad guys was freaking awesome. The dynamic of crew versus crew was exciting but we always know that Dom's team will come out on top. There were plenty of moments that had me and everyone else in the cinema gasping, in the midst of clapping and downright cheering. Fast and Furious had always been good at engaging the audiences in the simplest way. By making it all about the family.
A good majority of the movie takes place in London but I felt that an opportunity to exploit its landmarks and scenery was missed during the car chases as they simply zoomed past the surroundings in favour of emphasizing the characters' driving abilities. They have also seemed to have forgotten to shine a spotlight on the cars this time round which disappointed me. Human stars were important to drive the plot but in a movie about fast cars, I believe the rides were just as important.

In the first movie, Dom's love for muscle cars was inherited from his late father's Dodge Charger while Brian's preferred ride had always been imports, particularly the Nissan Skyline as seen in the second and fourth movie. It was this little moments that had always allowed the cars a emotional spot in the movie and was sorely lacking in this one in favour of the Dom-Letty relationship.
Like I said earlier, the plot was predictable and halfway through, you do get the idea of the sacrifices and twists that will take place. Unexpectedly though was the post-credit teaser of the third movie, Tokyo Drift, a movie in which its theme song was more famous than the movie itself. In that teaser, expect to catch a glimpse of yet another mega-action star with a background that explains the reason for Hans' fiery death in the middle of Tokyo square.

Would I watch it again?
Heck yes! Fast cars have always thrilled me and heist movies with good twists are always fun. Italian Job, anyone? But at the same time, it is important to remember that these are just movies and the stunts are performed by trained drivers and professionals. Cars do not leapt across a road divider and remain intact, roll cage or not.
So please drive safe and stay alive so that you can catch the seventh movie of Fast and Furious out next year. That's right. The next movie is already in the works so buckle up and stay safe. Fast and Furious 6 hits the big screen 23 May 2013.
Posted by Tania at 9:52 AM