Due to the limited time we had in Osaka (4D3N), my mother and I decided to do a full day trip to Nara and Kyoto on our second day there, opting to visit their main tourist attractions. Using the Kansai Thru Pass (you can read about my modes of transportation here), we were quickly on our way to Nara via the Kintetsu Line.


Upon reaching the station, we headed for Exit 2 in order to get to Nara Park. Getting to the park was pretty easy as from the station, there is a main road heading up a hill or turn right into a covered shopping arcade that will lead to the second, less crowded park entrance on the left.


Turned off by the uphill walk, we headed into the shopping arcade and came out on the other end, turning left into a short street with quirky shops before we found ourselves in the Kofukuji temple area. The temple area once consisting of over 150 buildings, now contains three buildings; the Eastern Golden Hall, Five Story Pagoda and the Southern Octagonal Hall.

The Central Golden Hall which was destroyed by a fire in 1717, is now being rebuilt and reconstructions are expected to be completed in 2018. The Five Story Pagoda is the symbol of Nara, standing at 50 meters and making it Japan's second tallest pagoda. The Eastern Golden Hall stands next to the pagoda and holds the temple's artifacts.

Nara Park is also home to a lot of free-roaming deers that are fed and cared for by the locals and regarded as sacred deities. So if you are the kind who squeals in fear at the sight of a deer coming towards you, then maybe you should give the park a miss because the deers are everywhere. And I do mean, everywhere.

Even on the way to Todaiji temple, we encountered a lot of deers. Tourists can even feed them with shika senbei crackers that can be bought at 150 yen a packet at stalls all around the park. The deers will bow to you for the treats but be careful as some can get very aggressive curious. I saw a deer grab a girl's shopping bag when she wasn't looking.

On the way to Todaiji Temple, we found the Nara Visitor Center, mainly because a deer ate my mom's map and she needed a new one (see, curious deers). I would really recommend dropping by the very modernized center as it has an earthquake simulator that let guests to experience the quakes that has wrecked Japan in the past. It is free of charge by the way. My mom had a go at it.

Todaiji Temple is known to house Japan's biggest bronze statues of Buddha in its Daibutsuden hall, the largest wooden structure in the world. We passed the impressive structure of the Nandaimon Gate which is made of wood and has two statues of the Nio Guardian Kings. We didn't go into Todaiji however, due to the massive tour groups there. Todaiji Temple is one of the must visit landmarks of Nara and so it is best to go there early to avoid the crowd. An entrance fee is required though.


It was near noon by the time we boarded the train to Kyoto next. Known for being the melting pot of Japanese culture, Kyoto is popular amongst local and foreign tourists. We arrived at Kyoto station after an hour's train ride and immediately headed to Kyoto Tower right across the station. With the Kansai Thru Pass, we got a discount on the entrance.

Kyoto Tower offered a 360 view of the city and even gave me a glimpse of the several attractions such as the ever crowded and popular Kiyomizu-dera temple and the huge burn marks of the Gozan no Okuribi (Mountain Bon Fire) on the hillsides surrounding the area.

Our next stop was Kiyomizu-dera temple which we took a bus too using the Kansai pass. However, due to our awe at the signs of Kyoto, we missed the Gojozaka bus stop by several stops and had to walk back the way we came to find the right street. Needless to say, after an hour of walking/exploring and two more wrong buses, we finally found ourselves joining the crowd making their way up the long street heading up to the temple. It was a good half an hour walk to the temple gates and along the way, lining the street was a variety of food, clothing and souvenir shops.


One of the most famous temples in Japan, Kiyomizu-dera is a UNESCO world heritage site and is known for being made without the use of nails, including the wide balcony wooden stage that extends from its main hall. As a popular tourist spot, there were a lot of locals and foreigners wearing yukatas or summer robes for picture-taking purposes.


The ambience was all very exciting and the view from the top of the temple overlooking Kyoto was stunning despite the crowd. Unfortunately it was a cloudy day and a lot of my photos came out looking unbalanced and dark. Entrance is only 300 yen and within the temple grounds, we caught a glimpse of the Jinshu Shrine dedicated to the deity of love and the Otowa Waterfall where visitors were allowed to drink from one of the three streams. Both places had long queues indicating their popularity.


We left Kiyomizu-dera by 5pm as we wanted to head to Gion to do some Geisha-hunting and down again we go along the street filled with shops, stopping now and then to buy souvenirs and food. By luck, I stumbled upon Sannenzaka and Ninenzaka street. I love this area as there was something zen and traditional about the green willow trees hanging over the stone walkways and wooden shops on a downward slope. It felt as though I had stepped back in time into into ancient Japan especially with the locals dressed up in their traditional outfits. A lot of shops there offer traditional items and souvenirs from fans to handkerchiefs to kendama toys. There were also hidden stalls and shops selling specialized stuffs like collector figurines and anime toys.

We exited near the Yasaka Shrine area and was making our way back to the main road when, as luck would have it, four maiko (geisha in training) appeared around the corner. As they were probably heading to an appointment on the client's time, I did not approach them for a photo but instead took photos of them as they hurried along. A rick-saw boy stopped them though to inquire which ochaya (tea house) they were affiliated to and upon receiving an answer, bowed deeply as the ladies departed, disappearing into Sannenzaka street.

Considering there are very few geishas and maikos operating in Kyoto now, I counted myself fortunate to have see four apprentices. To tell apart a maiko from a geisha, just look for their red collar. Maikos also tend to wear more elaborate and colourful kimonos than geishas. You can also tell them apart from their hairstyle and makeup.


Gion district was our next objective but after seeing the maikos, I decided to forgo it in search of food. From the Shijo road, our food hunt took us to the Kamogawa River that was a popular spot in summer. Restaurants lining the river have opened up a balcony for guests to enjoy the sights and sounds of the river while dining at an increased rate of course.


By luck, I also chanced across a cat cafe, Nyan Wan Chu in the Shijokawaramachi shopping district but the cafe had just closed. No matter because I managed to visit another cat cafe in Osaka the following day. But for Kyoto visitors, Nyan Wan Chu was one of the popular cat cafes to drop by for the cat lover. 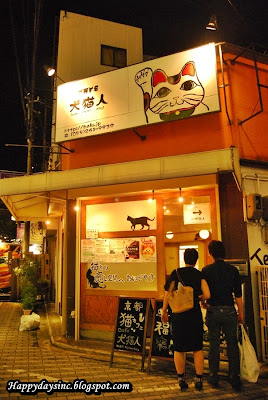 Because my relentless whining for food, my mom finally settled for Matsuya, another restaurant with the menu/ticket dispenser and we shared a plate of delicious Japanese pork curry rice. Between the both of us, the plate was wiped clean. If you are interested to give it a try, it is along the same street as Nyan Wan Chu and near the main road. 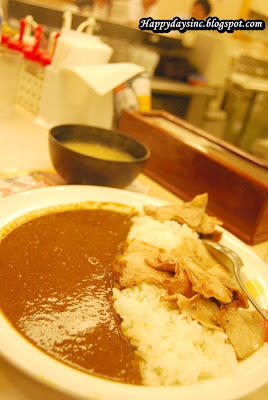 Our feet were aching from all the walking we had down so we took a bus back to Kyoto station and boarded a train headed for Nara where we switched over the Kintetsu line heading for Osaka. After a near-stranding incident where we got off at the wrong station in the middle of no where, we were back in Osaka and ready to crash for the night.

Or at least I was but my mom who had discovered in Kyoto that 7-11 offered free wifi decided to plant herself in the middle of the store to check her Facebook. I kept my distance from her and pretended to shop for breakfast.

That was the end of my second day in Japan and I could strike Nara and Kyoto off my to-visit list. The next two days it would be all Osaka for us.

I cannot imagine spending just one day in Kyoto. Kiyomizu-dera is a beautiful place but you've missed out on several other heritage sites. Guess you have to go back as Kyoto is such a wonderful place!

Hi Anon
You are right. One day is def not enough which was why I made a more recent trip in 2014 to visit Kansai again and stayed four days in Kyoto. Even that wasn't enough for me to see everything!