'Buy first, think later' seemed to be the popular motto of the day since it was after all, the second and final day of Comic Fiesta.

Everything was selling like hot cakes and even the Pikachu hoodie jacket was sold out by the end of Day 1 and the Shingeki No Kyojin jackets only had limited sizes remaining at the start of Day 2. I saw plenty of stuff that I wanted at the Creative market booths, ranging from doujins to trinkets to handmade jewelry, some of which were going at discounted rates. Abiding by the motto (just like last year) I ended up spending, um, RM600 within two days. I will show you my CF hurl at the end of this post.

Like the previous day, the early bird line was allowed into the waiting hall at 9am and were kept entertained by the League of Legends trailer as they waited patiently. Kudos to the volunteers and crew members for sorting out the ticket queue confusion from the previous day and everything proceeded smoothly this year.

Come 10am, all bets were off and the crowd was released into the hall. A lot of them made a beeline for the Culture Japan booth as it was their last chance to buy CJ merchandise. It was so popular that even the Mirai Summer posters were quickly sold out.

I dropped by the Redjuice art exhibition where a lot of fans were flocking to, taking photos of his artwork. I was no different, I guess. Had they been on sale, I would have considered one. Here's a fun fact. Last year, Redjuice threw a CF t-shirt into the crowd and guess who caught it. If you guessed yours truly, you are correct!

In the waiting hall, I was once again on the prowl for cosplayers. 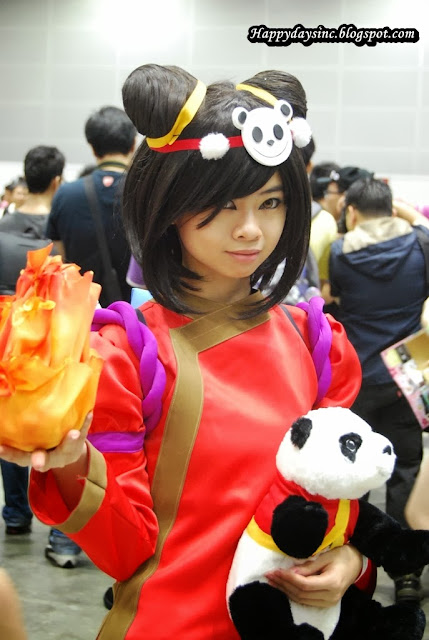 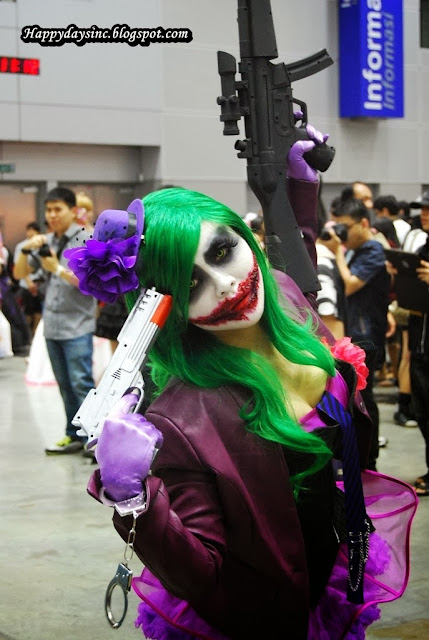 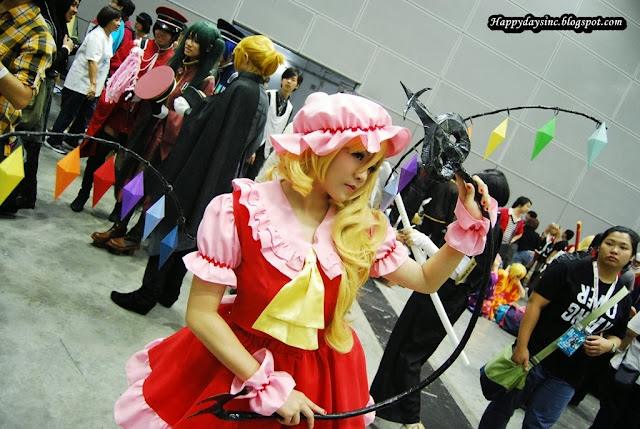 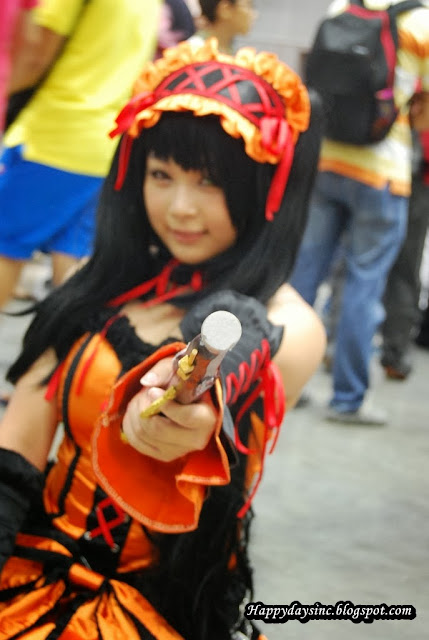 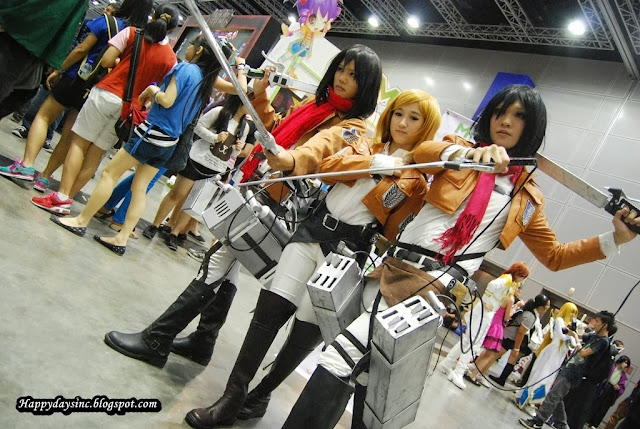 Since I missed out on the group cosplay competition on Day 1, I was rushed back to the stage,  determined not to miss the solo cosplay competition which was judged by guest cosplayers, Stayxxxx, Onnies and Jerry. This was the closest I got to Stayxxxx and she (yes, she is a she) is so hot! *girl crush*

Eh-hem.....anyway!
Surprisingly there was no Shingeki no Kyojin entry in this competition although there was a funny blend of gaming, movie and anime characters being cosplayed. For the preliminary round, each cosplayers was given 30 seconds to display their outfit and acting abilities. 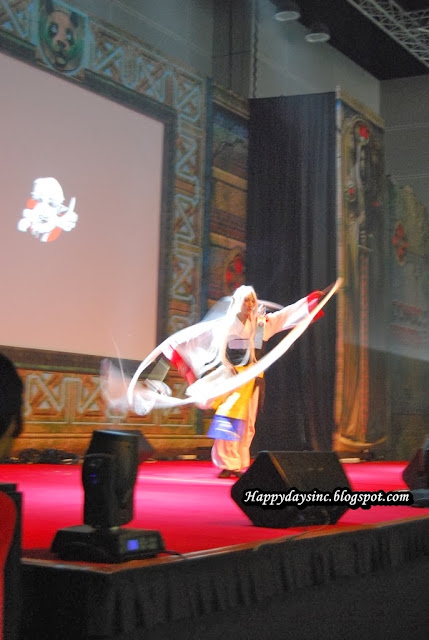 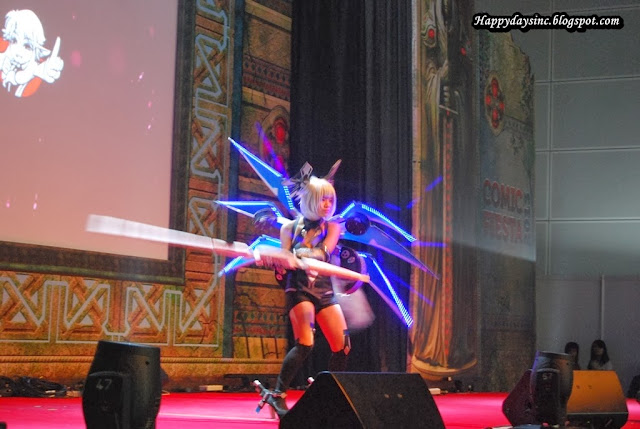 For the finals, the contestant were given a longer time limit to display their creativity and act out a skit with the help of their fellow cosplayers. While some left you wondering what just happened, others had everyone (judges and emcees included) laughing their heads off. One particular skit even brought back last year's 'batang' jokes. 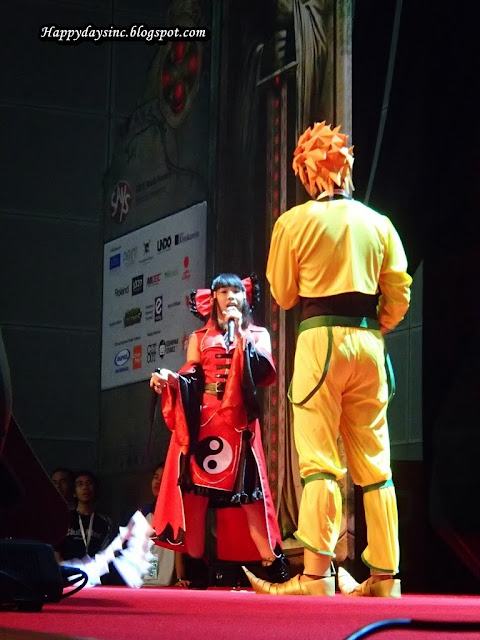 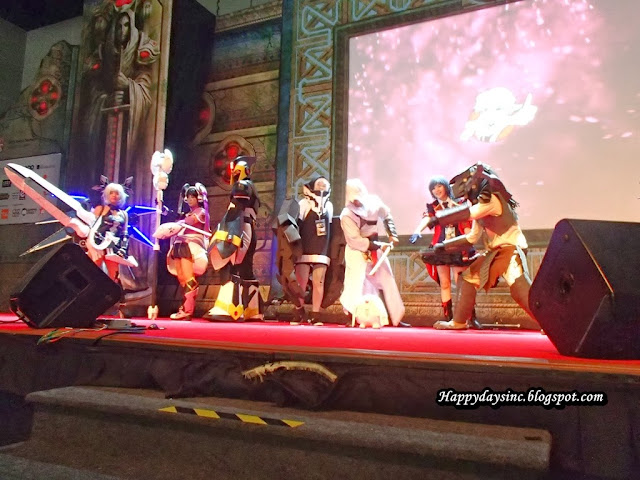 I don't have the results for this yet but once I do, I'll update it here.

There were less commentaries from the emcees this year compared to last year possibly on account of Shaun's sore throat but there was the occasional 'Hulk Smash' joke from them. And despite being under the weather, Shaun still kept the crowd riled up for the next performances to follow. 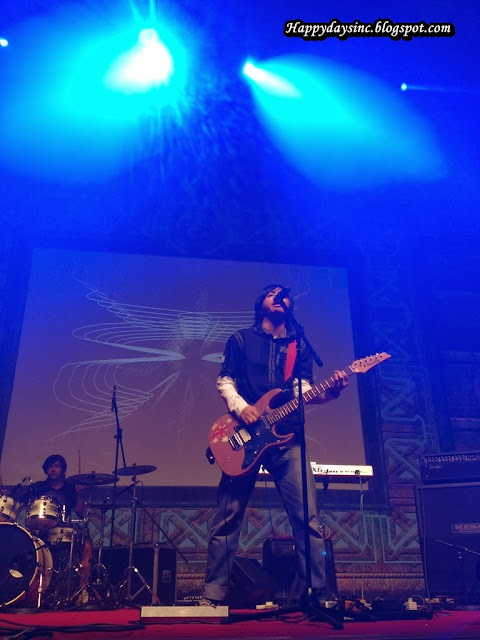 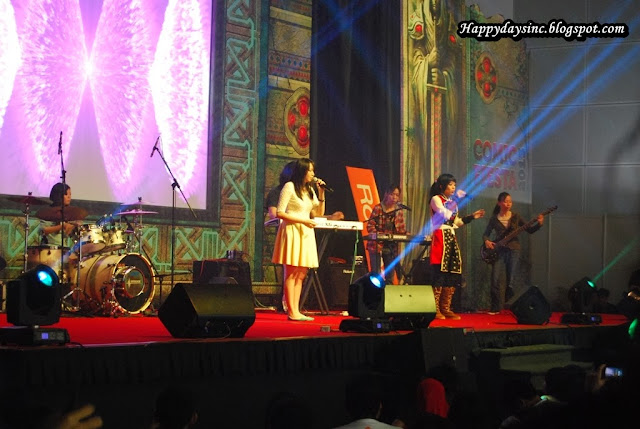 Besides bands and artists, Comic Fiesta 2012's solo cosplay winner, Yukapin also made a guest appearance with a dance routine of her own. Her energy on stage was so infectious that it had the audiences cheering and dancing with her. 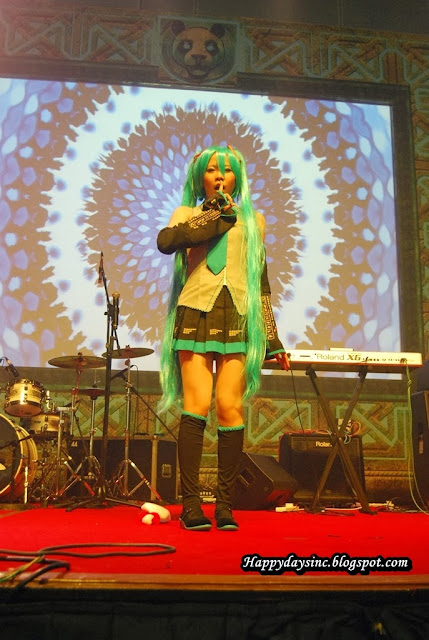 Taking a break from the stage, I adjourned outside for fresh air and, um, more cosplayer hunting. Gotta catch em all, right? 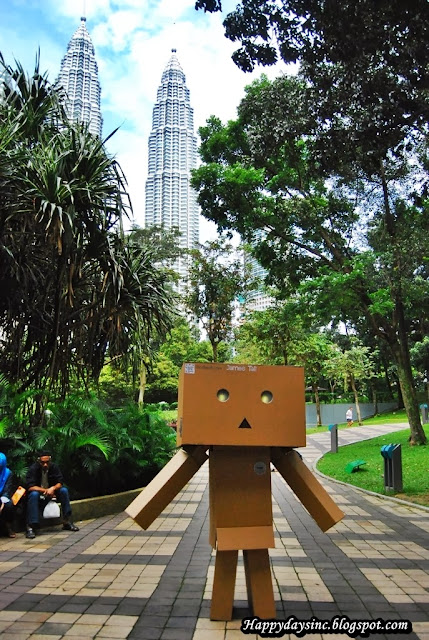 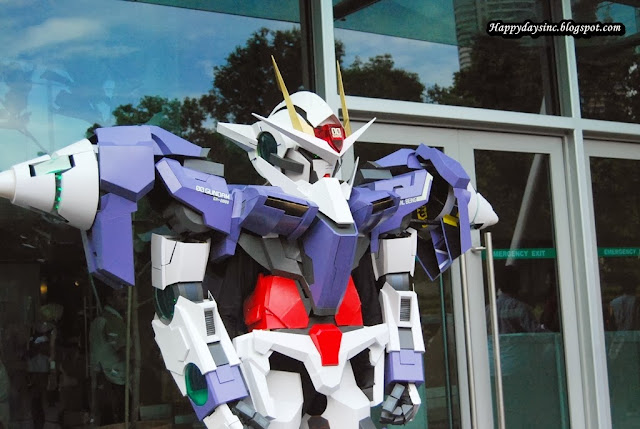 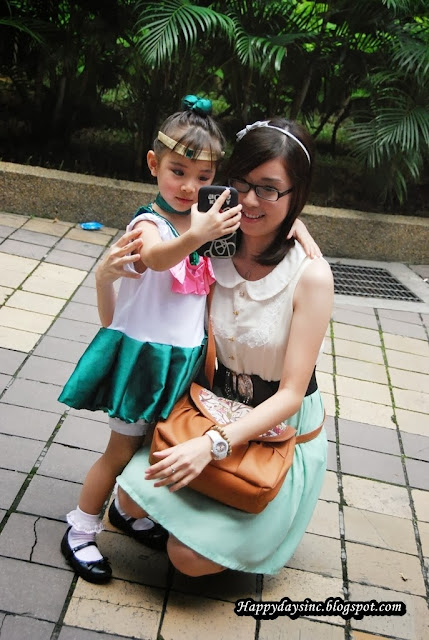 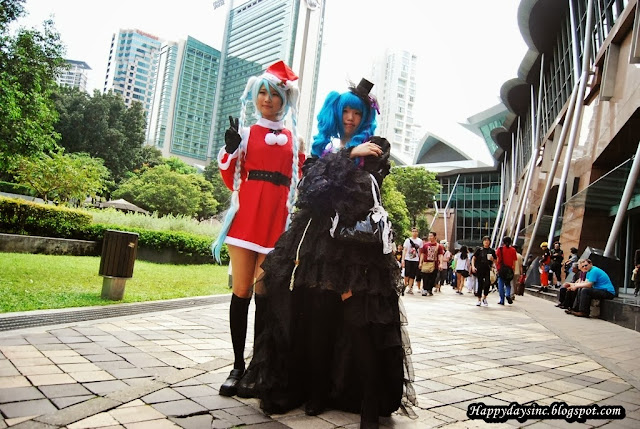 In the park, I saw tourists approaching cosplayers for a photo and even children of all ages dressed up as their favourite character. Believe it or not, Comic Fiesta was changing the way this Japanese subculture is seen in Malaysia and definitely for the better.

Due to the impressive line up of guests, signing sessions were held throughout the day at Coffytiam and the line would begin a good hour before the actual time and the line would extend along the wall of two halls. I kid you not! 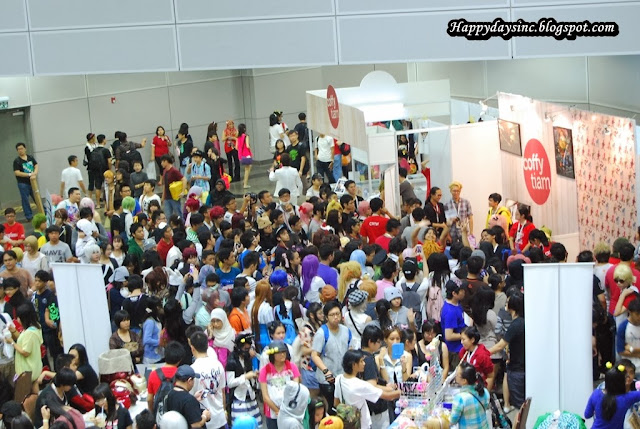 I actually contemplated joining the queue to get Stayxxxx's signature before realising that the line had extended past the main door and there was just no way I would be one of the lucky few. So with a heavy heart, I retreated to the upper balcony to entertain watch the gathering crowd of fans trying to snap a photo of Stayxxxx, Onnies and Xrystal. But because there was a no photo policy, CF volunteers had to keep photobombing any lens pointed their way.

Definitely felt that the signing session could have been conducted better.

Throughout the two days, so many things were taking place simultaneously around the halls from forums, panel talks, interviews to live band performance. Unless I could Shunpo, Apparate or clone myself (hah, Bleach, Harry Potter and Naruto reference!), there was just no way I could cover everything (T_T).

On top of that, the amount of things to see and buy was just too overwhelming. As promised, here is my Comic Fiesta 2013 hurl: 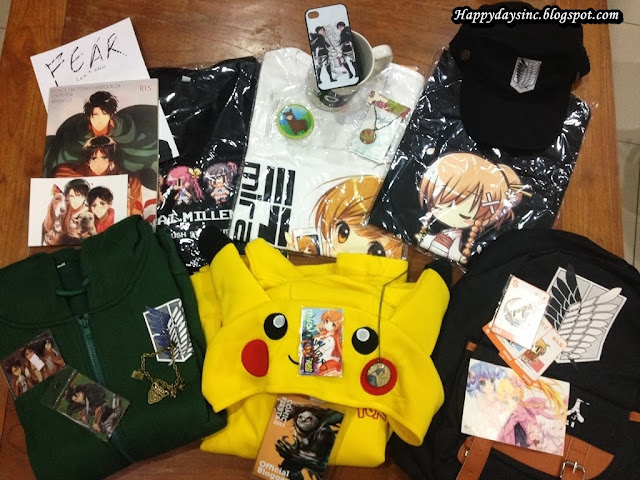 I feel so happy when I look at this picture and at the same time, depressed that Comic Fiesta 2013 was over for 2013. Yeah, so just excuse me while I curl up into a ball and rock myself back and forth until next year's CF.

Great job to the CF Committee, crew members and volunteers for all your hard work throughout the year in making this happen again and again for us fans. Many people may not know that this is a purely volunteer-based event where everything is done by fans of the culture. Comic Fiesta truly is an event by fans for fans and after 11 years of being organized, one can see how far that passion has taken the ACG community. 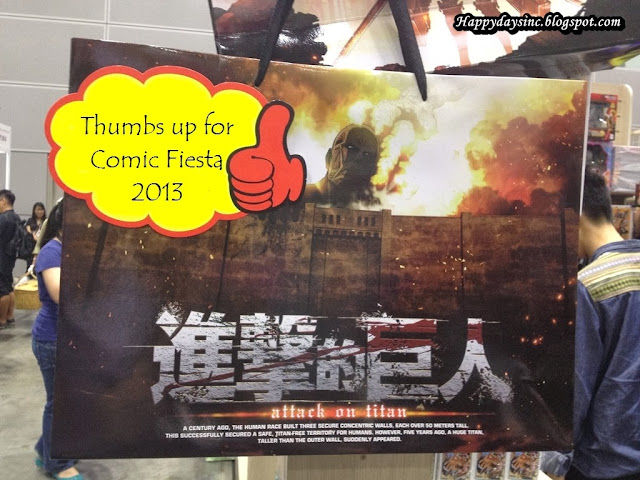 11 years and 39,8555 visitors later, Comic Fiesta remains the largest and longest running ACG convention and will continue to be so in years to come.

Thank you for letting me a part of this event even in a small way as official CF blogger and I look forward to seeing what next year brings.

As for my readers and any CF-goers reading this, what do you think about Comic Fiesta 2013? What do you think will be the next anime/manga craze to storm CF14? Who do you want to see in 2014? Leave your thoughts in the comments below.