It just so happened that when I was in Singapore in December 2013, the Amazon River Quest of the Safari River Park had just opened the previous weekend and until further notice, the boat ride was complimentary. However, there were limited slots at a few time slots available and it was first come, first serve at the counter in front of the River Safari entrance.

My mom and I had bought our ticket online at SGD25 per person and only had to print out the e-tickets to get in. After we got our Amazan River Quest tickets, in we went! 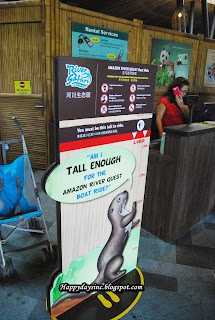 Brisk-walking past the first half of the park, we headed straight for the Panda enclosure before the crowd.The enclosure was wonderfully air-conditioned for the bears' comfort and made to resemble their natural habitat and environment back in China. 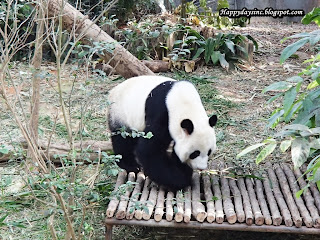 Kai Kai was out and about, snacking away and slowly moving about his area. Luckily for us, the elusive and shyer Jia Jia was wandering about her enclosure as well. She usually keeps to herself in her room where her keepers had to install a camera for visitors to catch a glimpse of her. 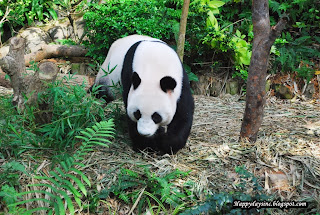 To avoid disturbing the pandas, visitors have to be very quiet, something a lot of visitors failed to practice. One girl let out a loud high-pitch squeal when she thought she spotted Jia Jia. Everyone around her immediately shushed her. 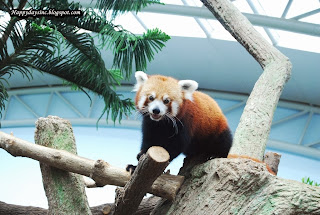 Besides Pandas, the enclosure was also home to two Red Pandas and a golden pheasant. The Red Pandas were snoozing on my first round but when I came back later, they were running around their open-air area and over our heads. Super cute. I wanted to pick them up and squeeze the life out of them but one look at their long sharp claws and I quickly dismissed the idea.

There was long queue already waiting at the Amazon River Quest ride and I found out later that by 11am, the seats had run out. The staffs were very friendly, pleasant and efficient in directing visitors into the boats. Just wait for your turn patiently and listen to the staff and you will get your turn.

Warning: Front row sitters will get wet so do not put your bags on the floor of the boat. 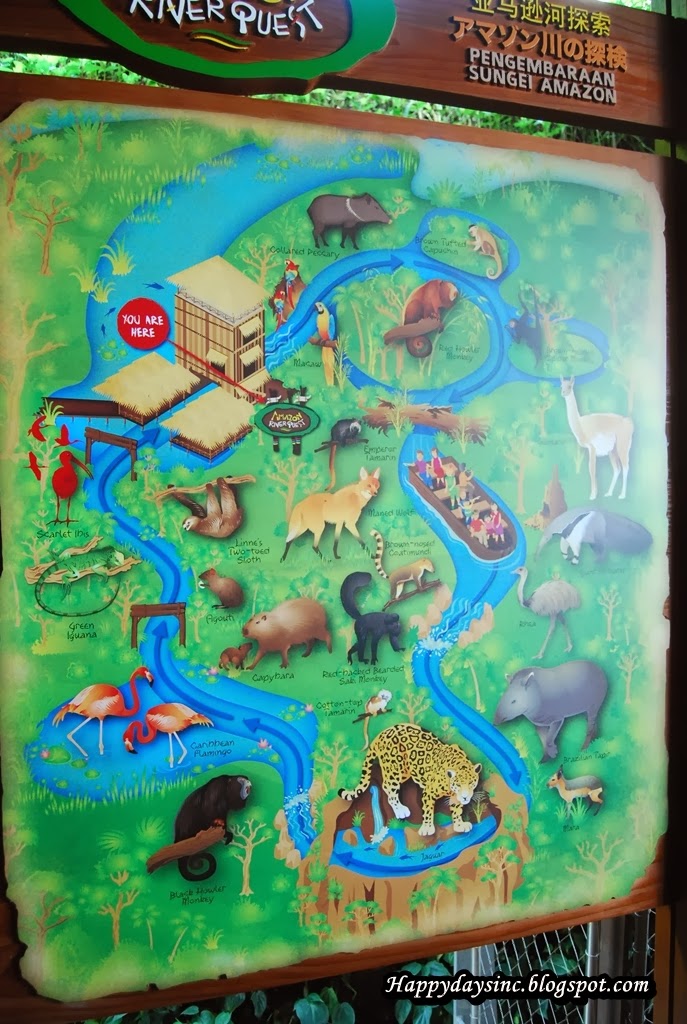 You really need to pay attention to your surroundings as the boat cruises along at a steady pace and you need to strain your eyes to catch a glimpse of some of the fast moving animals like the monkeys. If you are lucky, you might be able to see the jaguars clearly. The ride lasts about 15 minutes. 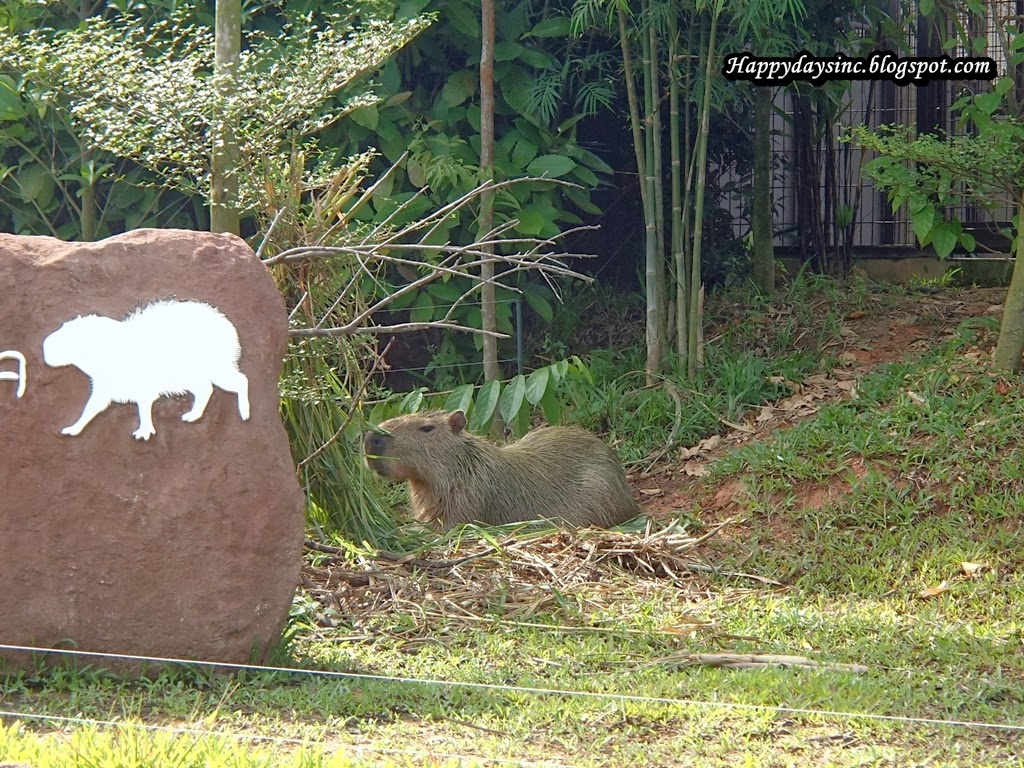 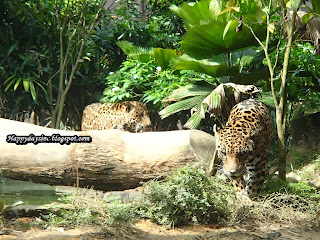 For lunch, we returned back to the panda area where there was the Mama Panda Kitchen. As you can imagine by its name, the cafe was panda themed and their most popular dish was the Panda Pau and the giant Cappuccino. 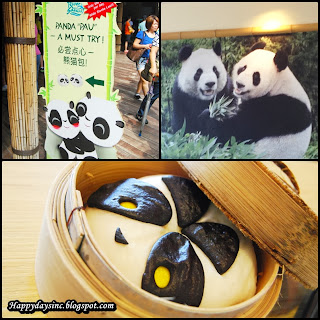 Only 200 pieces of the Panda Pau is made a day, making it a must-try amongst visitors. The pau cost S$2.90 and comes with a choice of either custard or chocolate filling. The bun was soft and fluffy and the filling (mine was chocolate) although little was not too sweet and overwhelming.

The cappuccino didn't have much kick but the coffee art was adorable. Drinking it without destroying the art was the hardest thing I had to do. I suggest getting there before the lunch crowd if you plan to try out these specialities as there will be a long line and no place to sit come lunch time. 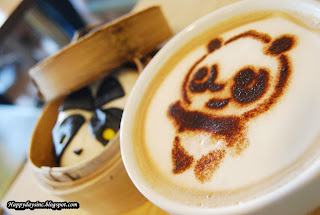 Besides the Panda exhibition and the Amazon River Quest, the park also has 10 different ecosystems mirroring that of the River Nile, Yangtze River, Mississippi, the Amazon and the Tundra to name a few. Here you get to see animals and fishes in their habitats, many of which are endangered. 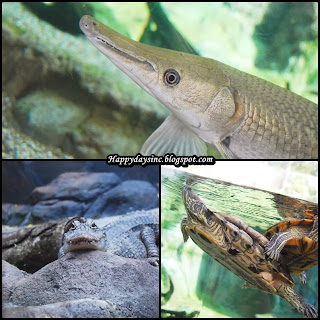 The most impressive river exhibit, I felt, was the Amazon Flooded Forest exhibit. There were manatees, slowly swimming alongside a lot of South American fishes. Visitors could just watch them swim about through a huge viewing area that made it seemed as though we were underwater with them.

Now that was pretty cool! 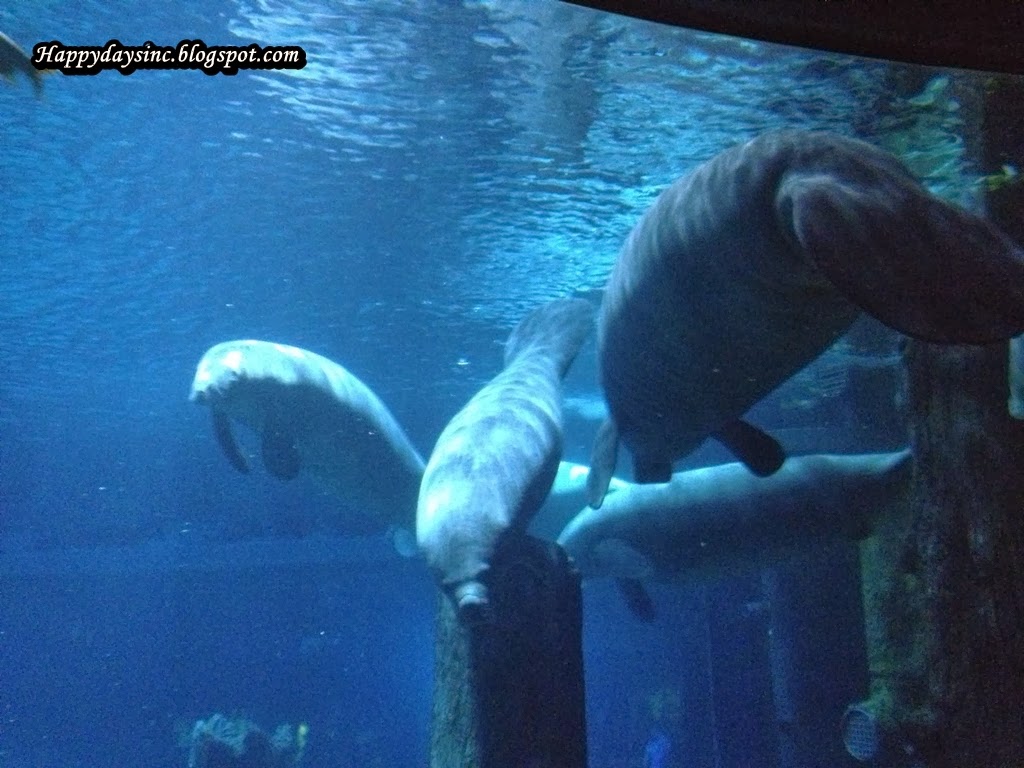 Piranhas were kept separated for obvious reasons but unlike Malaysia's Aquaria, there was no feed show for them. 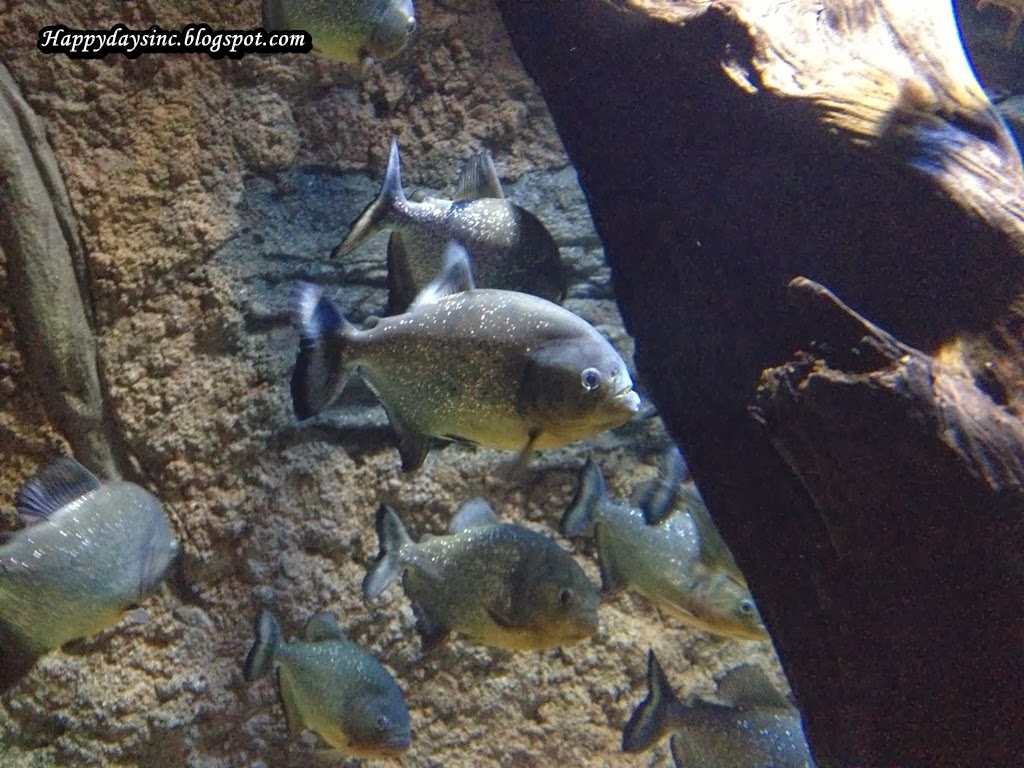 Besides river exhibits and an aquarium, there was also the Squirrel Monkey forest, a monkey enclosure where you can see and get close to the small monkeys there. Best to keep your food away as the monkeys are able to roam freely around the enclosure. However, they have become so used to human presence that they just ignored us in favour of going about their daily routines, like eating the fruits and salad provided and playing. 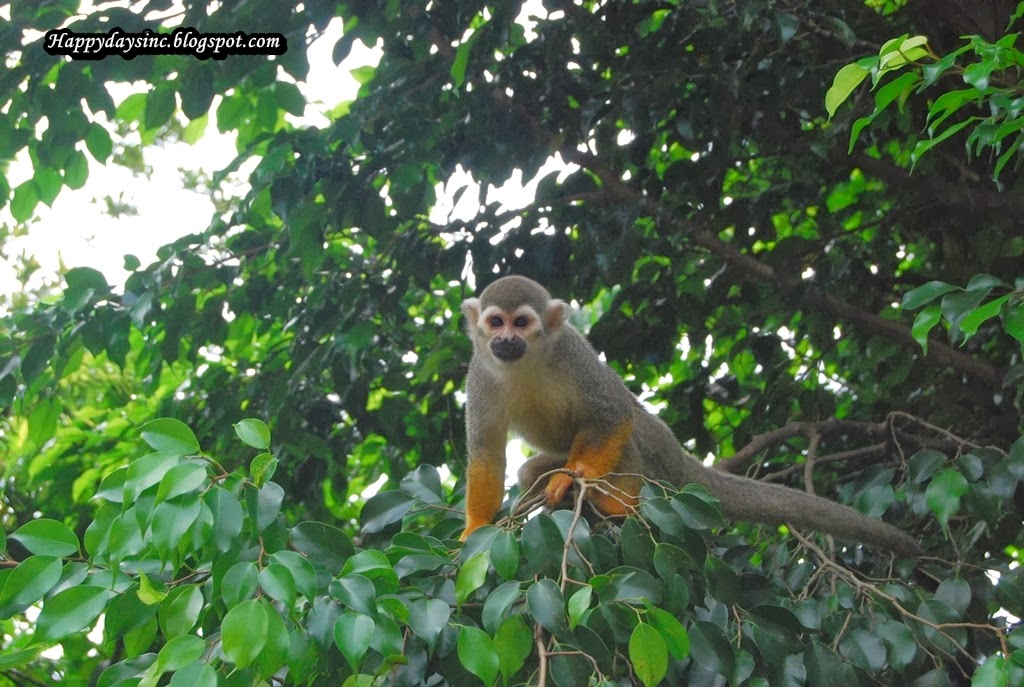 As I was leaving, I found that visitors could actually re-enter the park again as they will be given a chop upon exiting. That meant you could go to the other parks or go to the restaurant or gift shop outside and go back into the River Safari again. 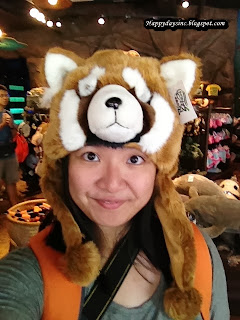 You will get to save more if you decide to hit more than one park in a day as the main entrance of the zoo sells packages to suit your plan for the day. 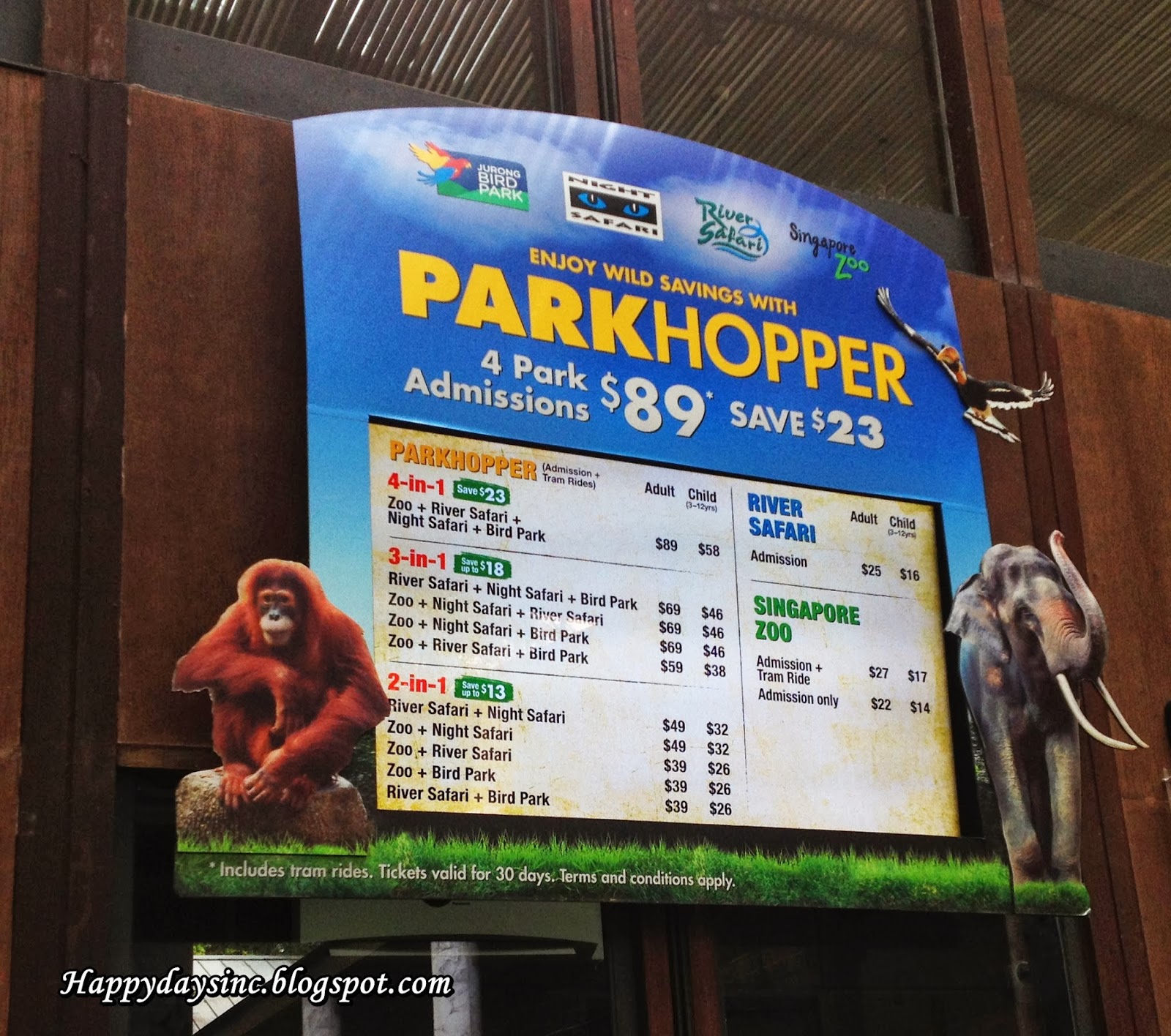 For more information on Singapore's Wildlife Reserves, check out their website and for the River Safari park, go to their website for more details.
Posted by Tania at 10:00 AM

Hi Tania, it looks like an enjoyable trip for you:) we will be going middle of next month, cant wait to see the Panda:)

It was! I would recommend going early and immediately head straight for the pandas to beat the crowd. Have a good trip!