A month before my trip, it suddenly dawned upon me that we had no idea how we were going to carry out our itinerary. We had no transportation or sense of direction to get to our intended sites. So I consulted Lord Google and came across Febris Bali Tour. Reviews of this tour group have been positive and assuring so I shot them an email and received a prompt reply confirming my tour booking in Ubud.

After a stressful night of delayed flights and missing purses, I was looking forward to a day of visiting the historical and cultural landmarks that made up Bali. Our guide, Mathir and driver, Putu were at our hotel, Sri Ratih Cottages in Ubud, early and waited patiently while we finished up breakfast. Mathir was very polite, courteous and spoke good English as he explained our itinerary for the day.

Our first stop was Taman Ayun Temple, located in Mengwi Village and is about a 40minutes drive from Ubud and 30minutes from Denpasar. The pond and garden surrounding the temple were huge and well-maintained with a clear pathway leading to the temple area. 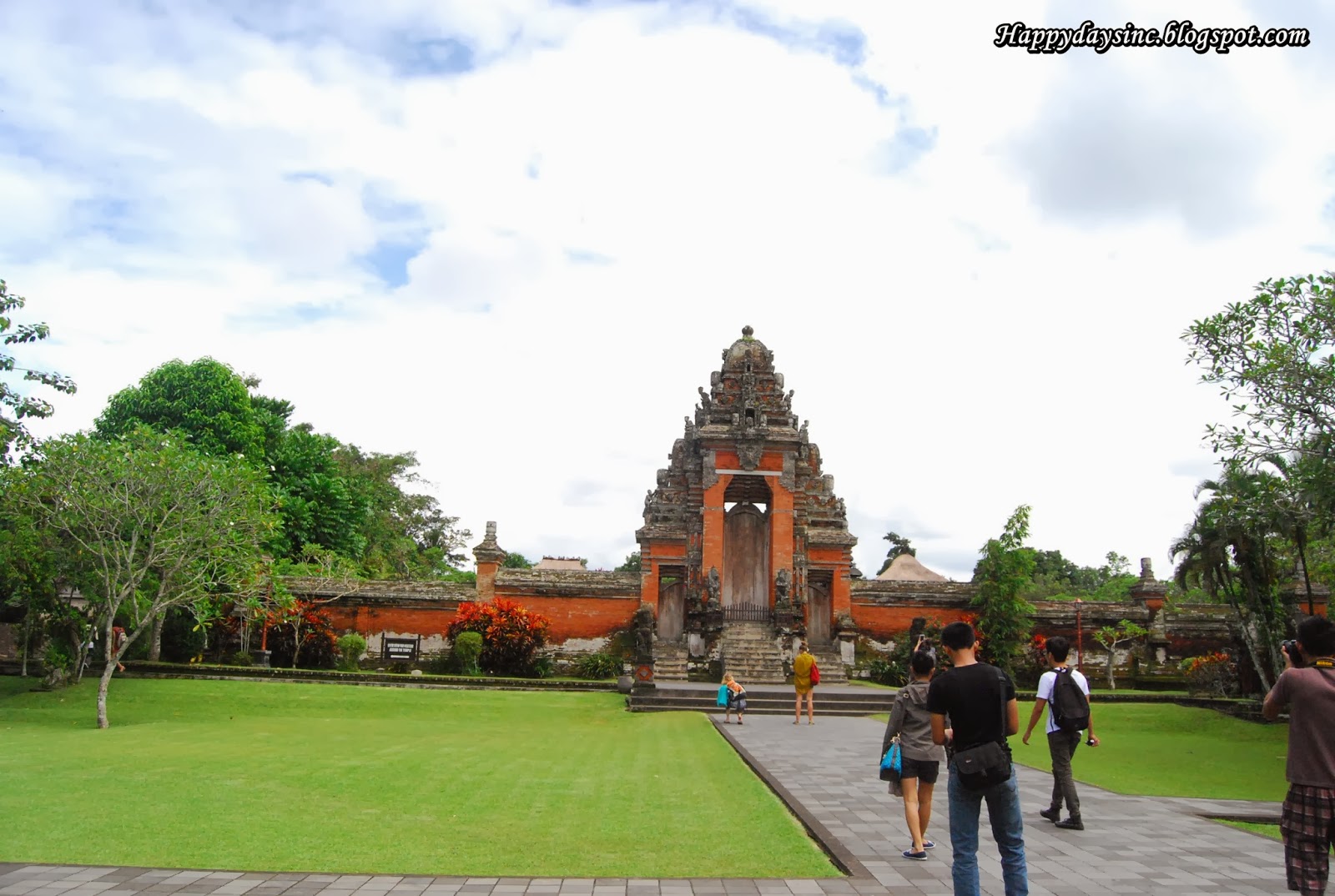 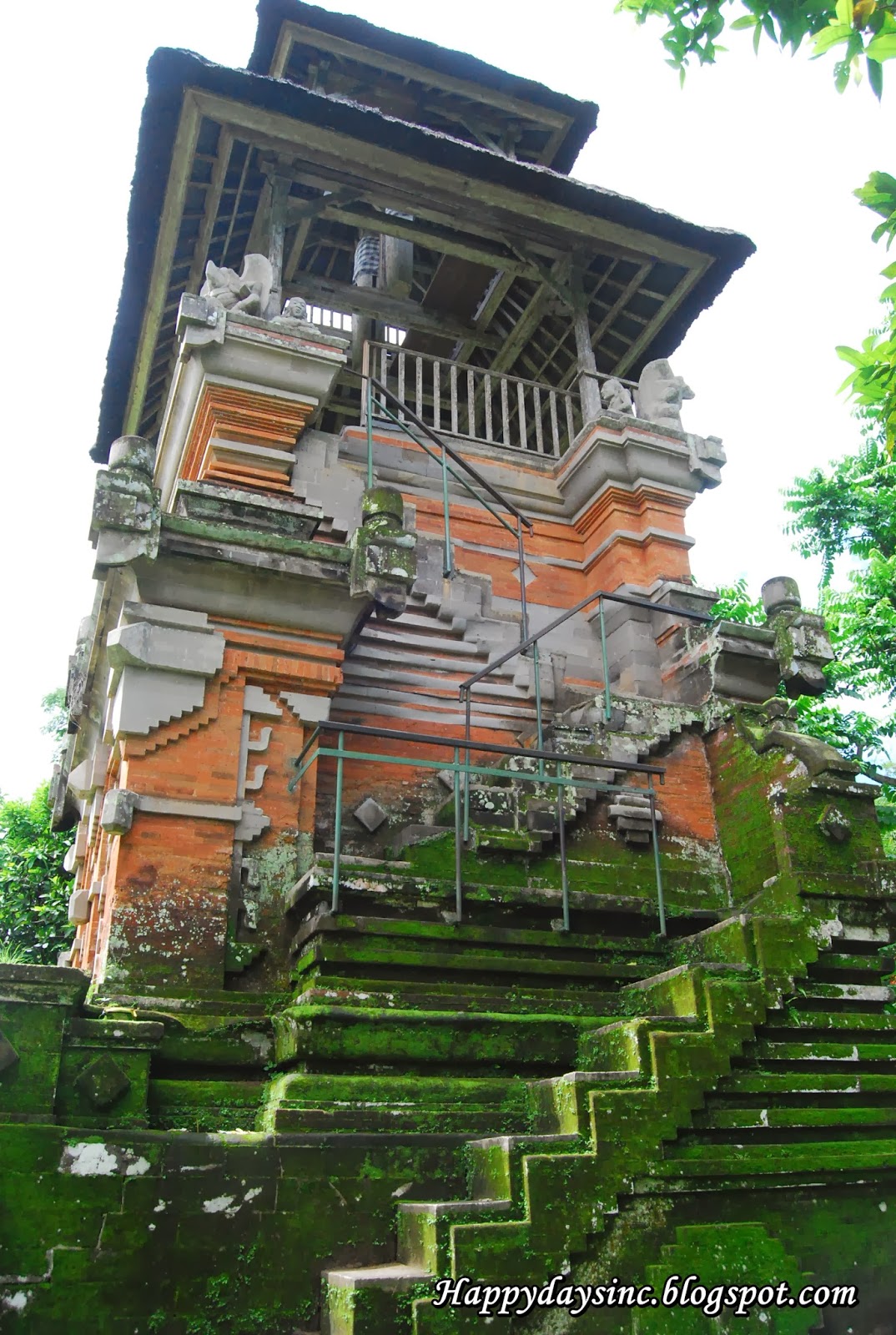 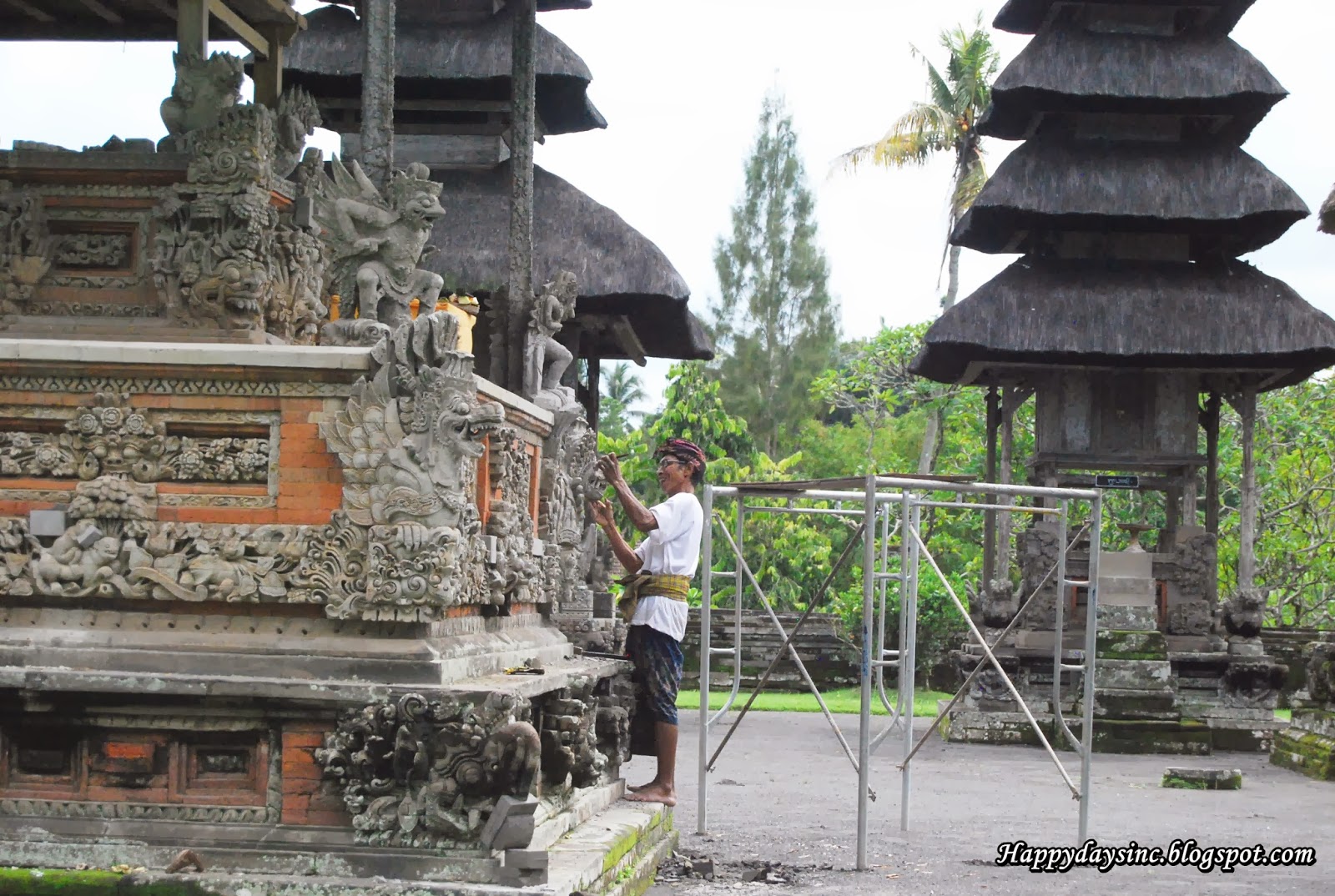 It was a very bright but cloudy morning and we could feel our sweat dotting our foreheads as we wandered the courtyard, doing the touristy thing of taking pictures. Domestic and wild roosters were kept in cages in the garden corners, allowing visitors a closer look at their shiny feathers. Cock-fights was a popular hobby in olden days but not so much now. We climbed up a tall bell tower to get a view of the garden before making our way down to the temple itself. The temple was lined with shoulder-height stone walls and tourists were not allowed to enter it but could still look over the wall and take photos. 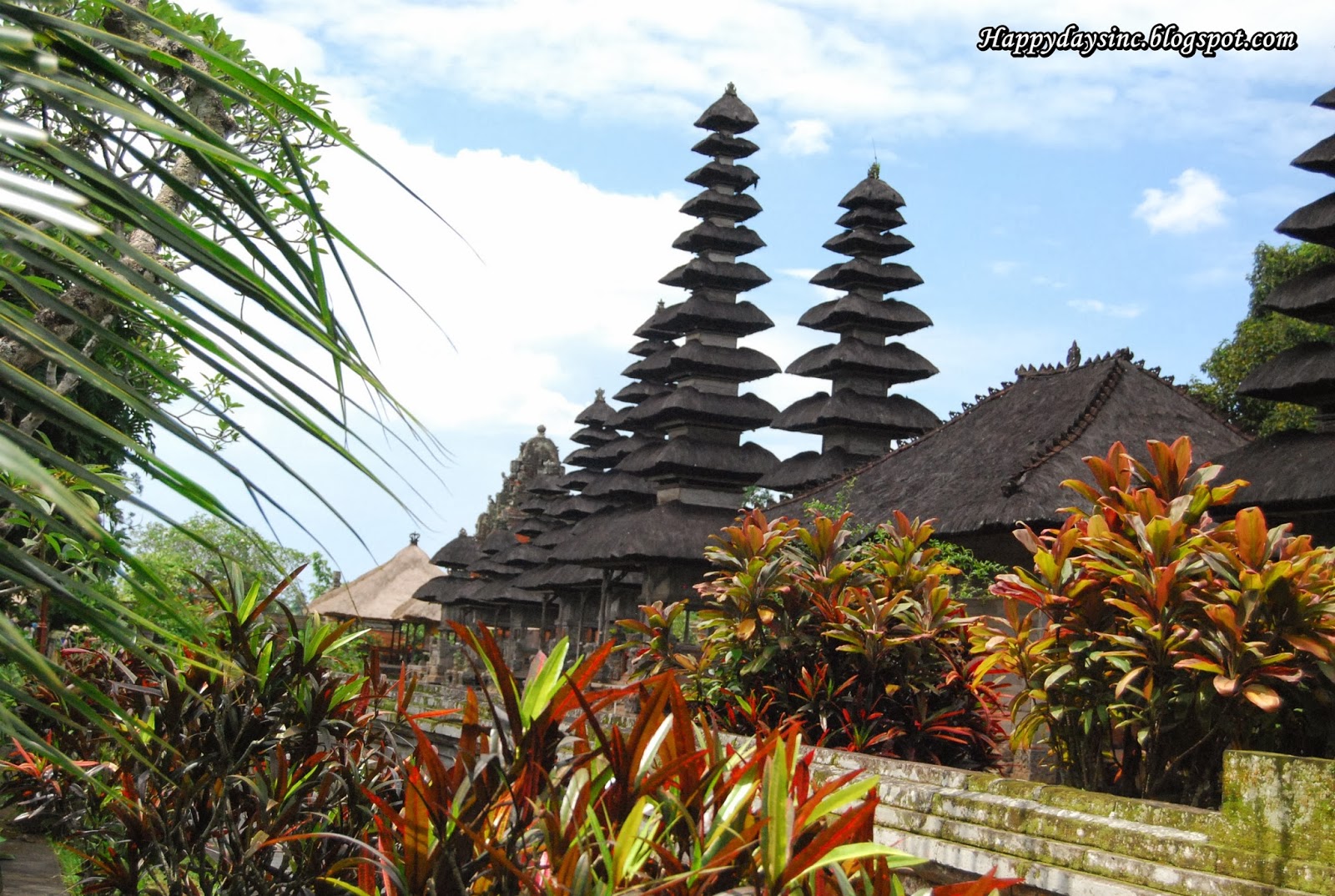 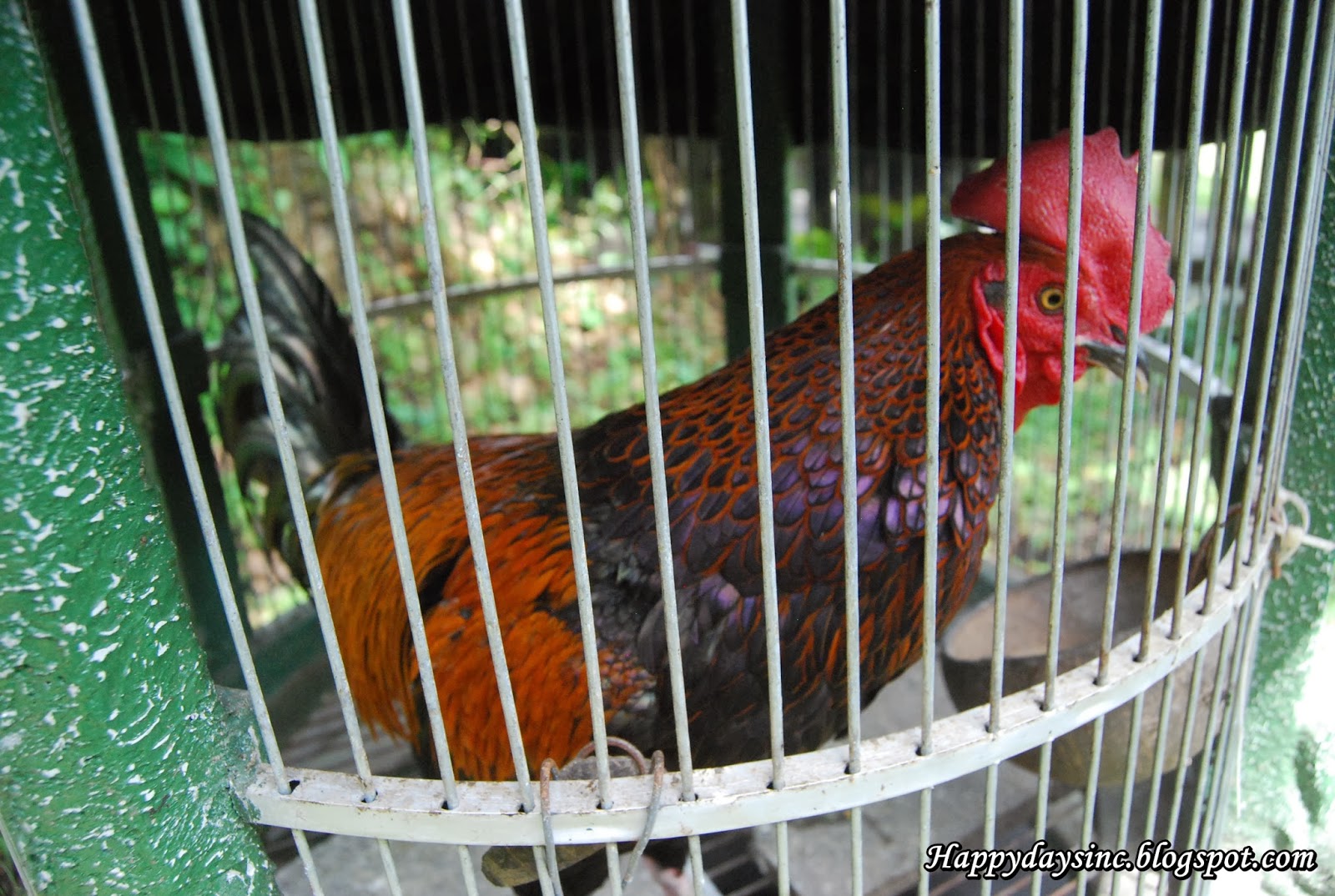 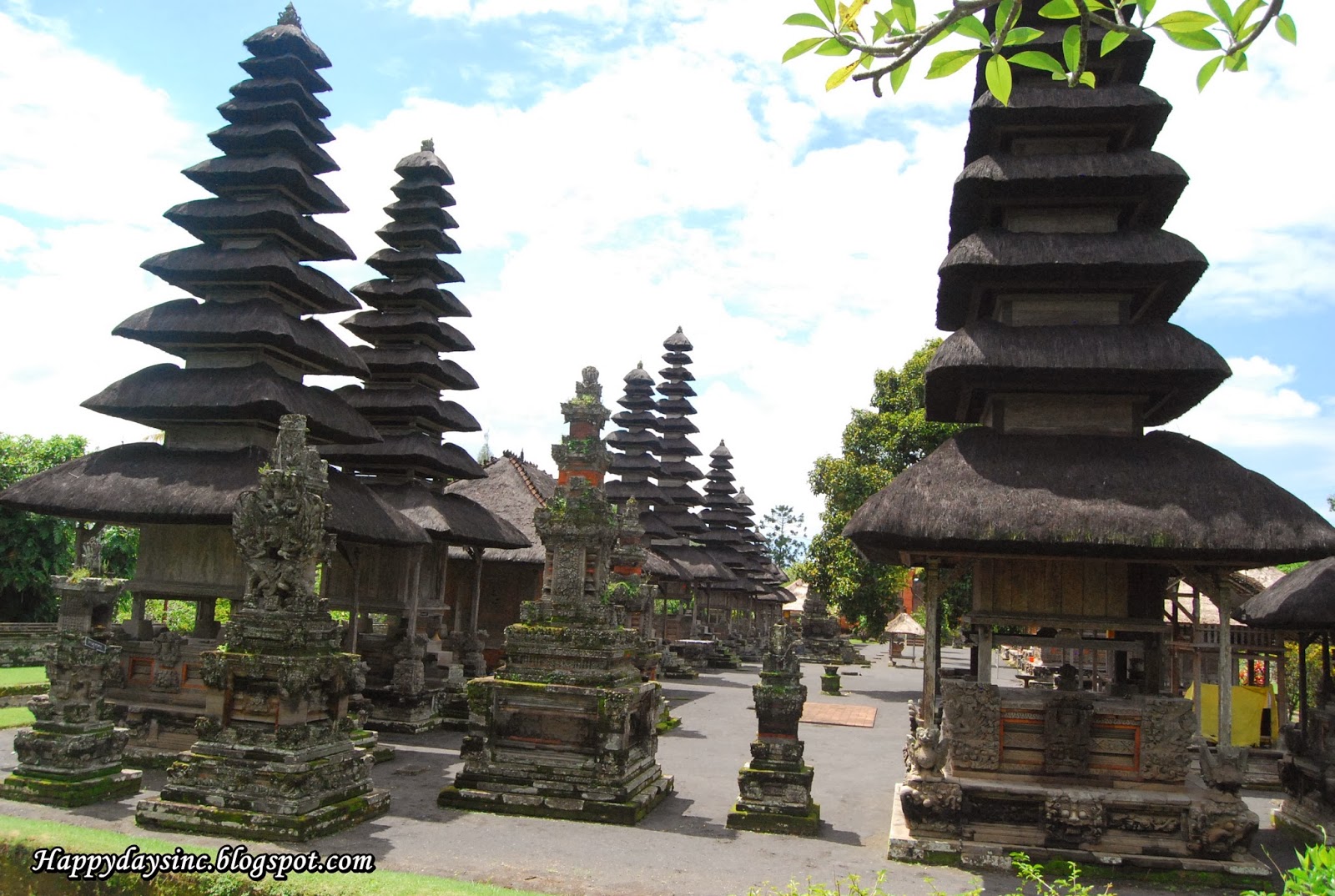 Our next destination was Ulundanu Temple on Lake Beratan but first, we stopped by a coffee plantation, Subak Bali Agro where we were given a tour of the plantation and got to try their extensive list of coffee and tea as well as a cup of the most expensive coffee in the world, the Luwak coffee. The maker of the coffee and a nocturnal animal, a civet cat was spotted sleeping its small enclosure. Luwak coffee is essentially beans from coffee berries that has been digested and shitted out by the civet cat. So basically coffee poop. 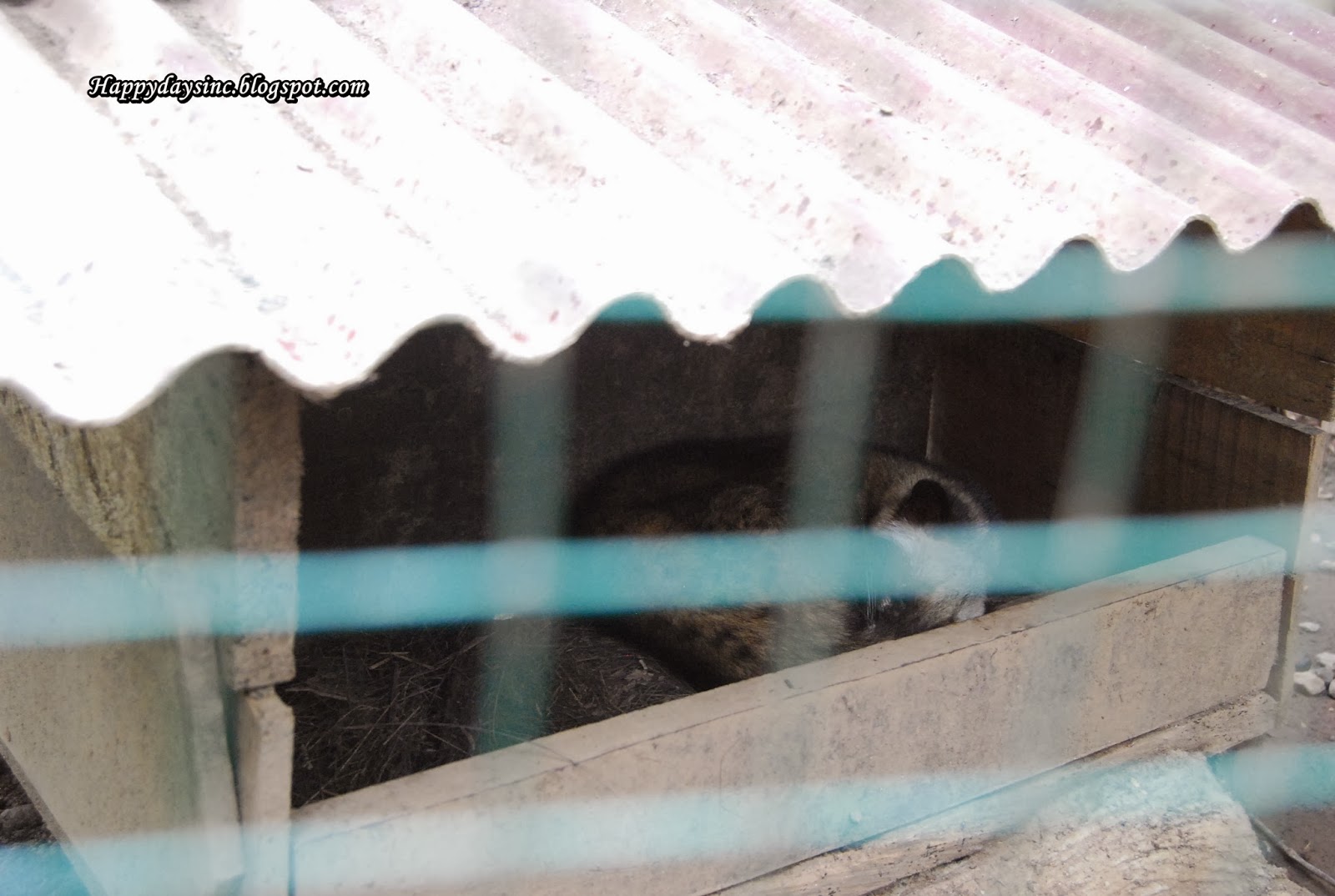 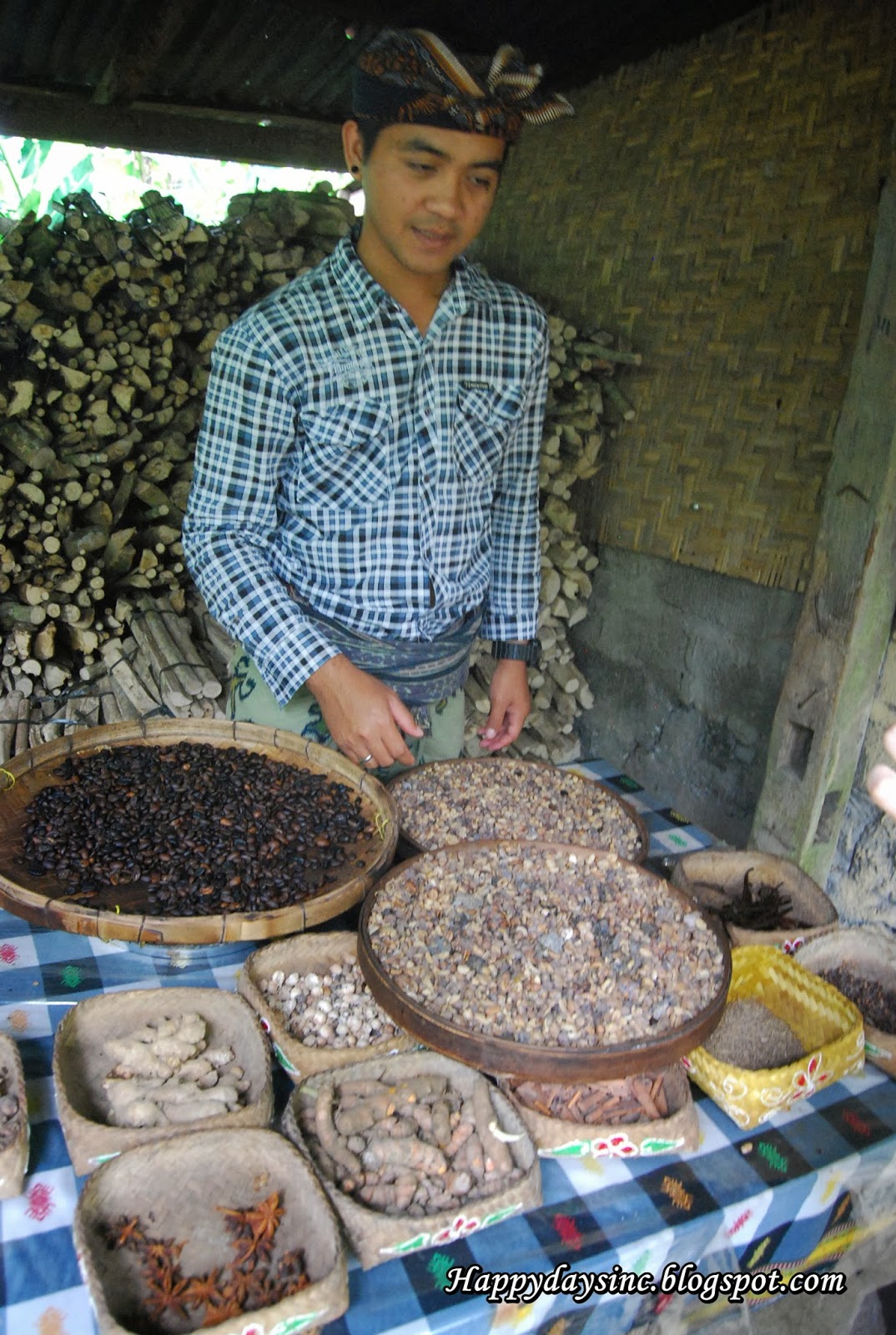 Real Luwak coffee comes from wild civet cats and are therefore harder to come across. Its rarity has made the coffee a novelty drink to try and to cater to the demands of tourists, many farmers in Indonesia has taken to catching civet cats and caging them to mass produce the coffee. While this may translate into more affordable prices for tourists, the quality of the coffee and the well-being of the animal comes into question as many farmed civet cats has been found in horrid conditions. 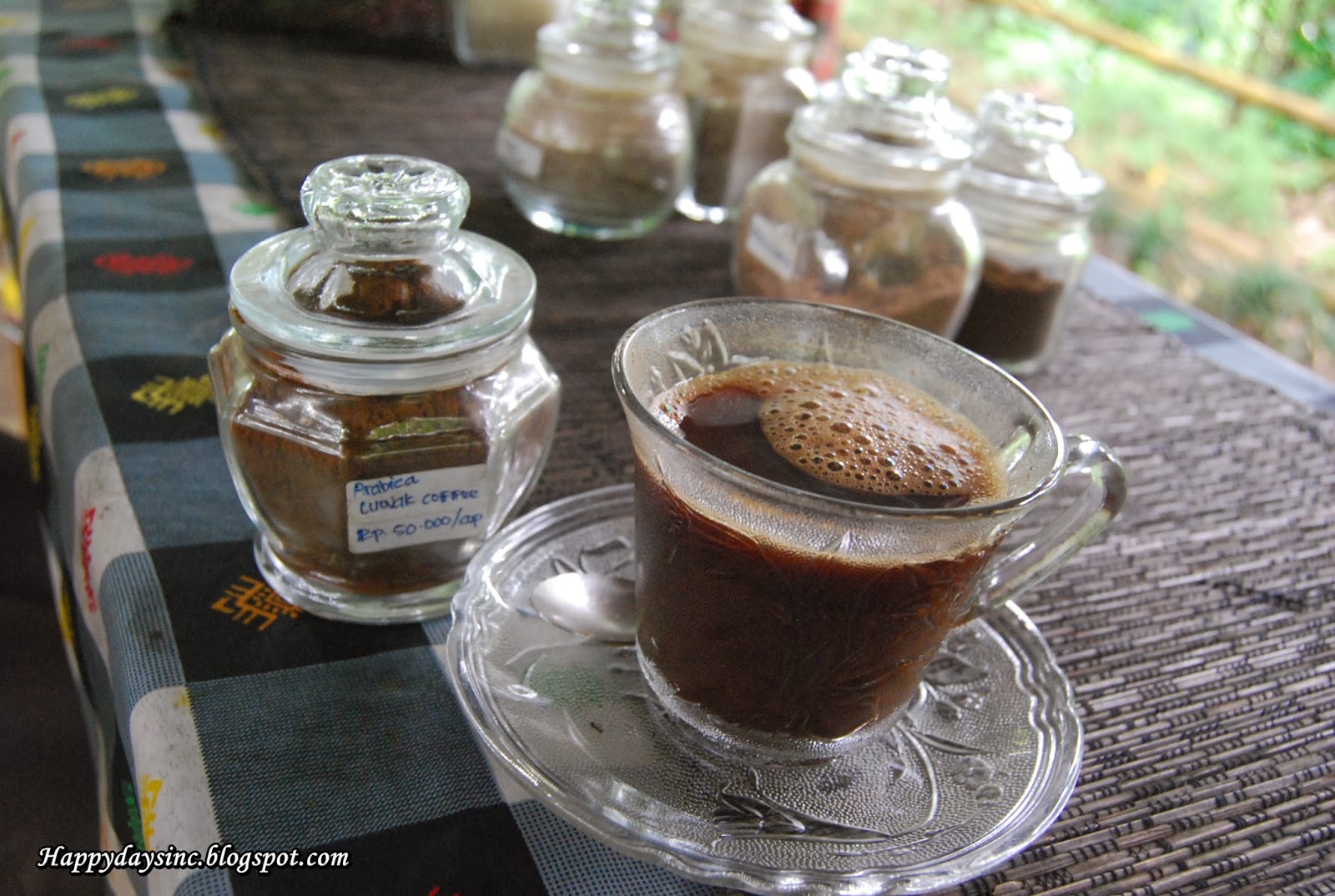 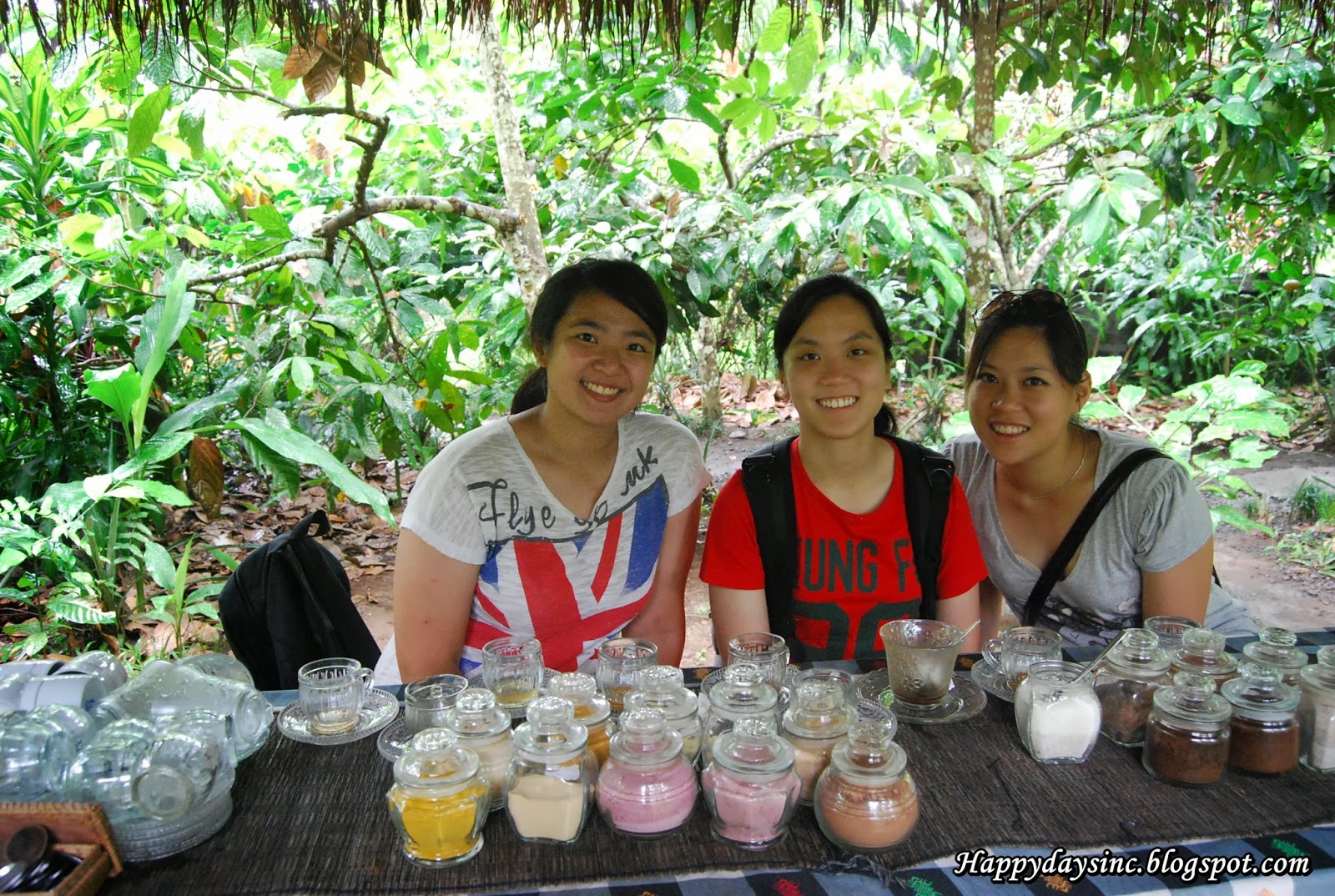 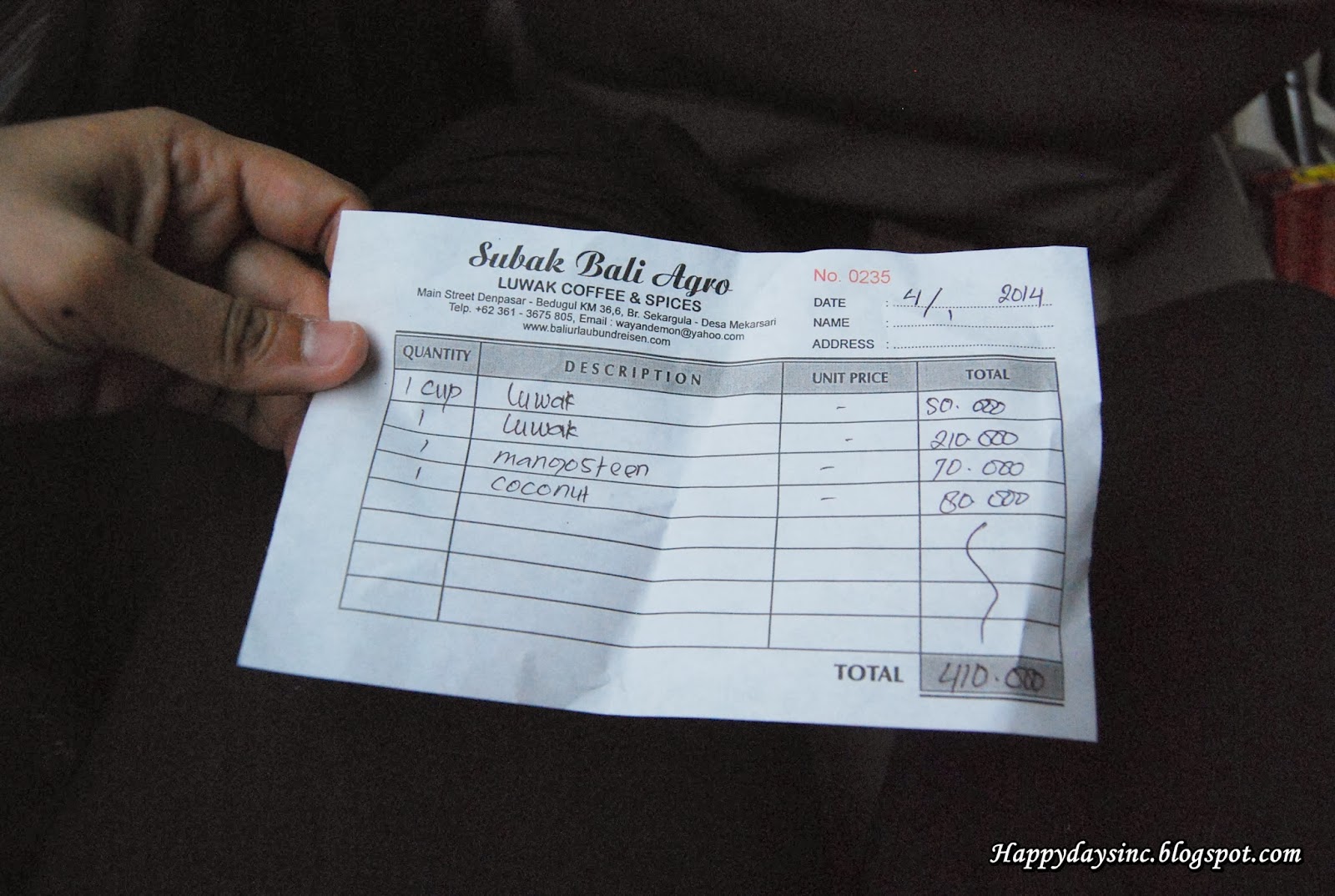 Sadly because Luwak coffee was a novelty to me, I (shamefully) bought a small packet of it as a souvenir. I wallowed in guilt for the rest of my holiday. This was to be my first and last time buying Luwak coffee, I swear! I also bought a packet of coconut coffee and mangosteen tea. Now those were worth it as they were unusual flavours and delicious.

Entrance Fee: FOC. You are also not obligated to buy anything.

We resumed our drive to Ulundanu Temple heading into the hilly landscape of Bali where we were slowed by traffic on the narrow, one-lane road and by a light but relentless downpour. A journey that was supposed to 30 minutes (according to our guide) took an hour and my friends and I slept on the way there. When we got to Lake Beraten, it was still drizzling and we were given umbrellas by Mathir. Poor guy didn't have one for himself and had to use a small handkerchief to cover his head.  I felt bad for not offering mine but did not run the risk of falling ill as I could already feel a cold coming on. 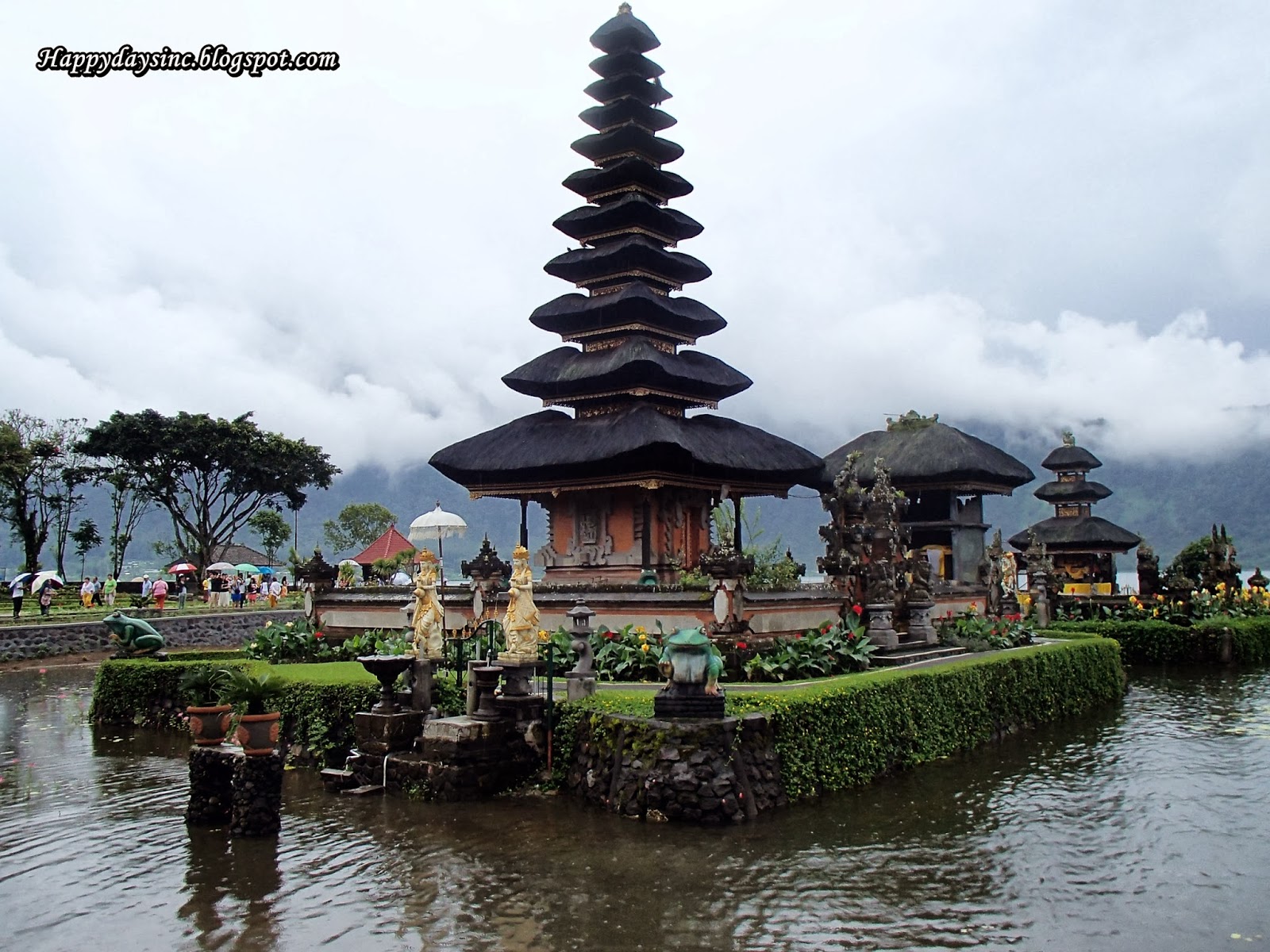 Back to Ulundanu Temple. The place was crowded with tourists despite it not being peak season and everyone was crowding the main attraction, taking turns to get shot of the famous temple on the lake. A little further up, there was a small dock meant for boats but people could use it to take a photo of the temple from a different angle. 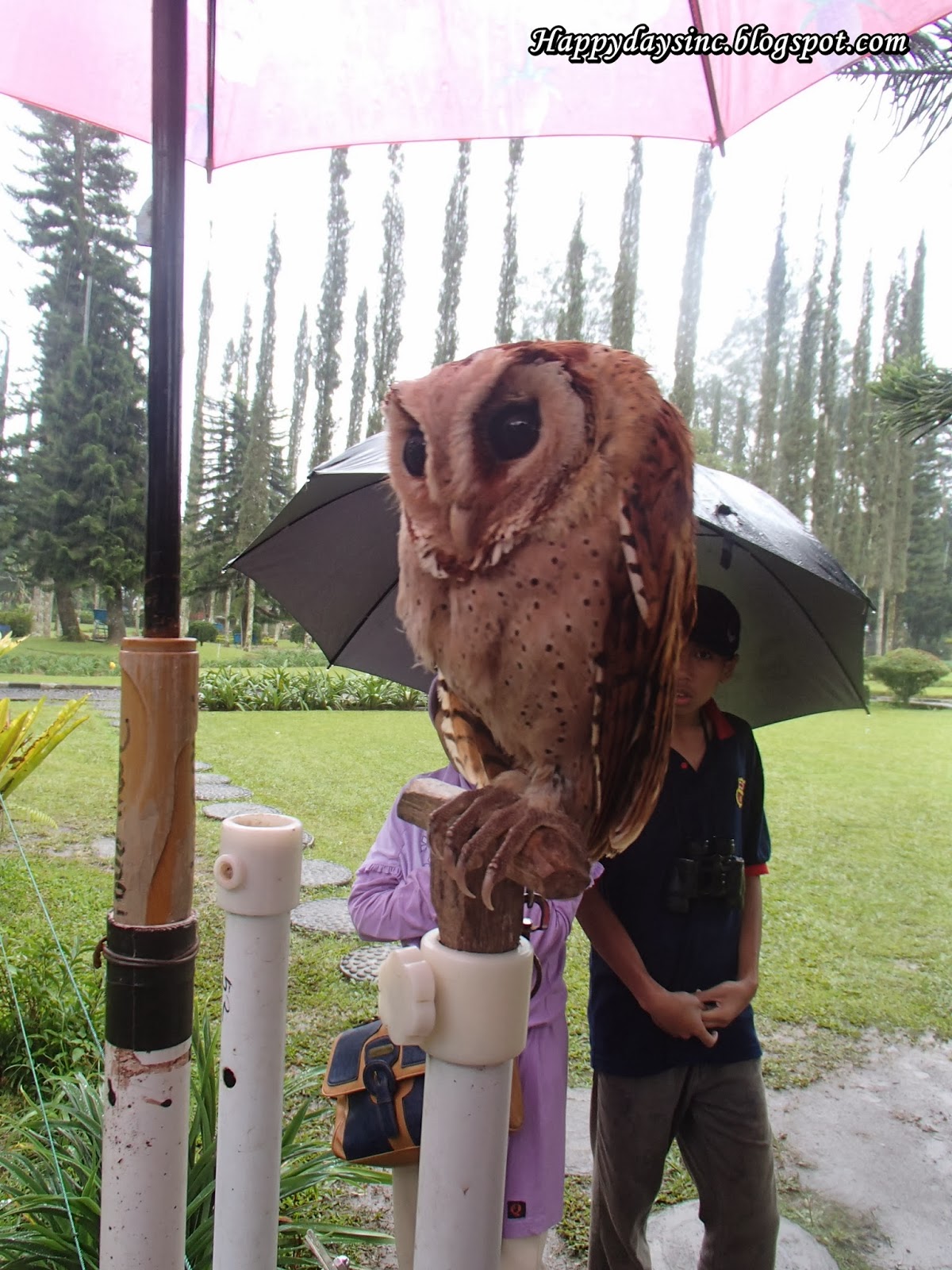 The surrounding grounds was lovely with colourful flowers and a few kancils (mouse deers) in an enclosure. There was also a photo stall where you can take photos with owls, eagles and bats for a fee. Self photography was not allowed.

At this point, the rain had gotten heavier and we quickly retreated back to the car, by now fairly cold and famish.Thankfully, our next stop was lunch at Pacung Rice Terrace that overlooked, well, rice fields with mountains in the background. Lunch was buffet-style but the selection wasn't as extensive as I had hoped for. The only dish I went back for seconds was the fish cake on a lemongrass stick. They also served warm tea, coffee and cold orange juice. 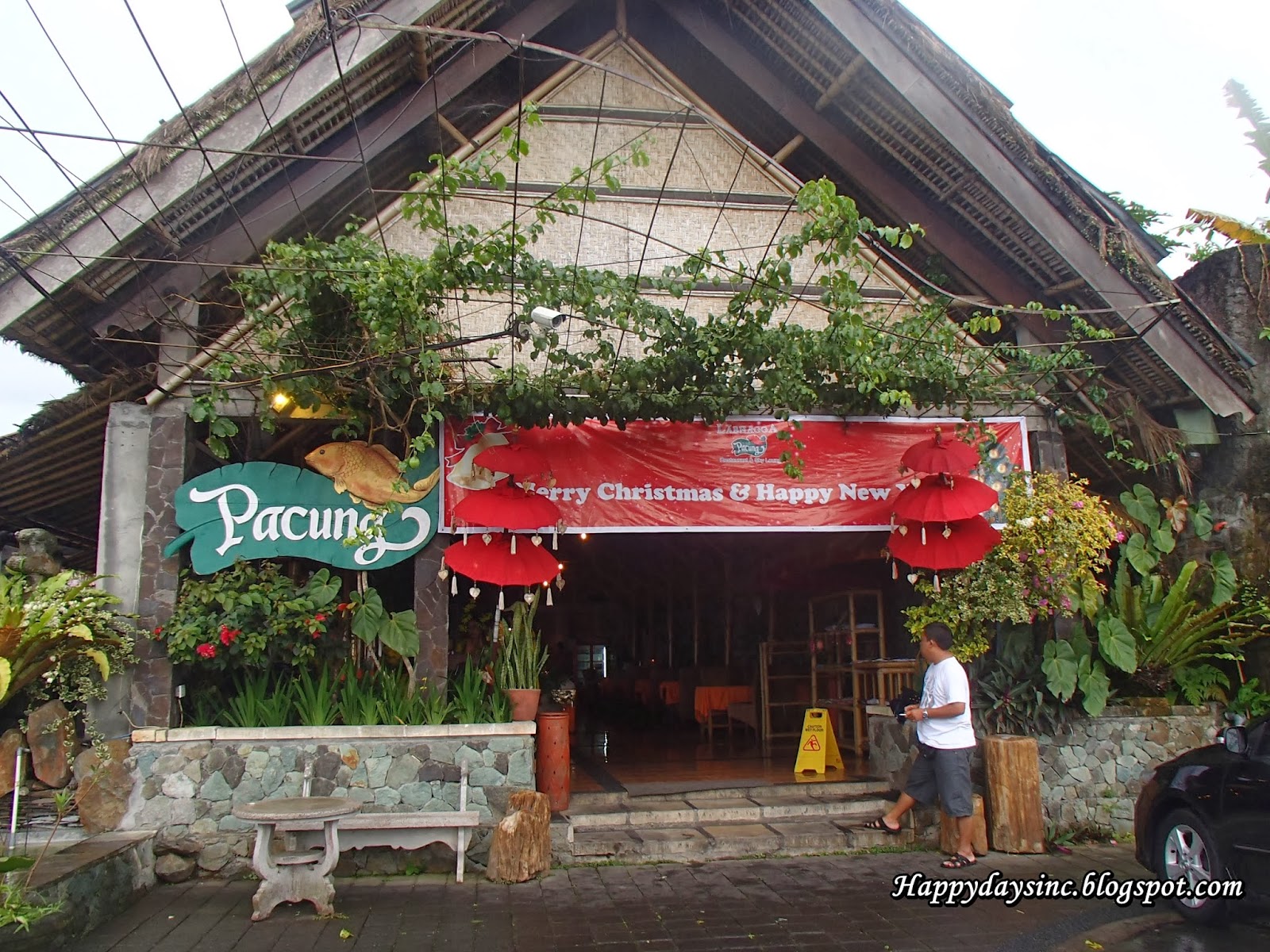 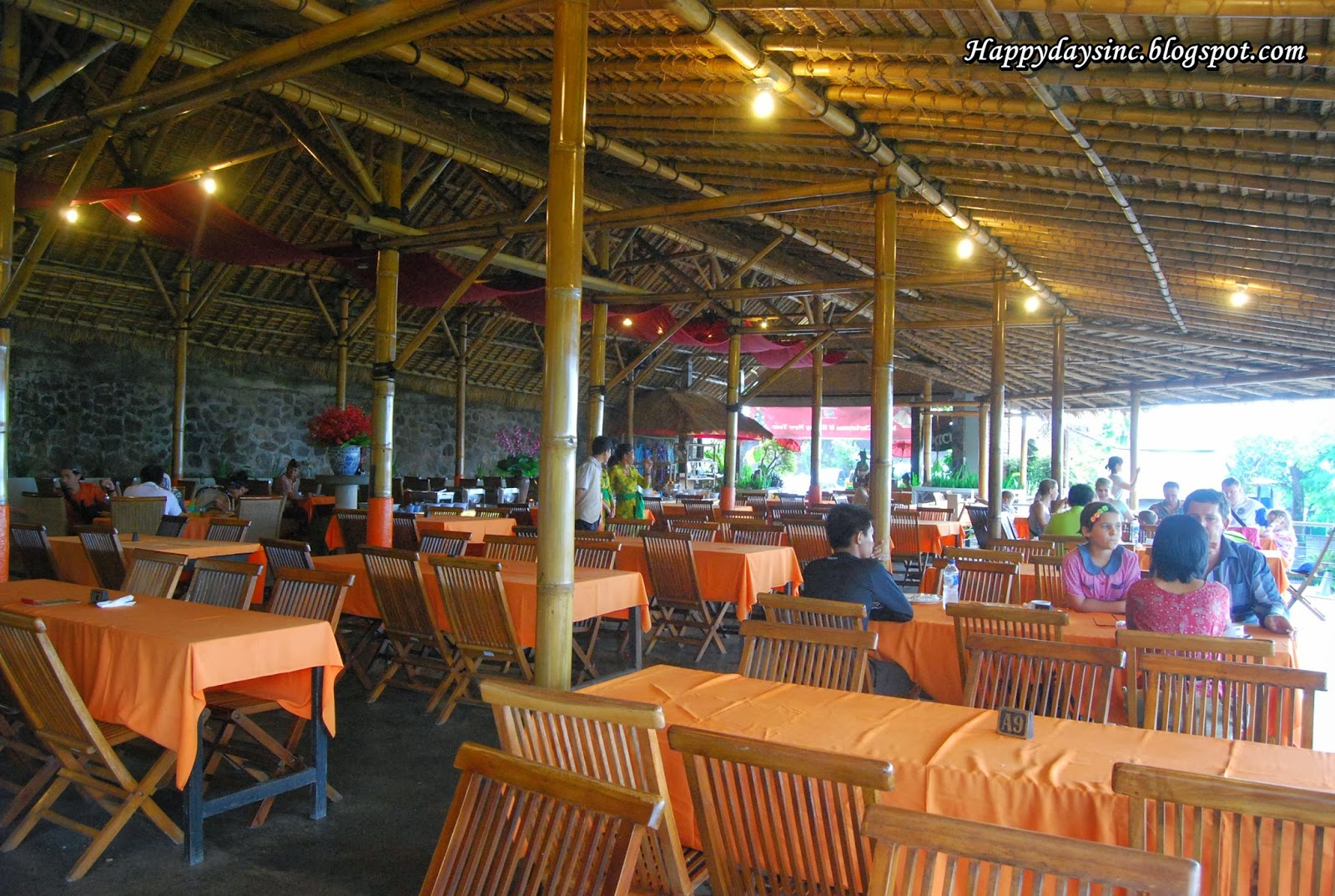 The scenery was serene and peaceful.....for about 10 minutes.

After the tenth photo, I was keen to head on to the next attraction, Alas Kedaton Monkey Forest. A local guide greeted us at the entrance to escort us through the monkey-filled area that consisted of several rows of shops (the guides are usually also shopkeepers here), a monkey statue and a temple. The main attractions are of course the monkeys that were allowed to roam freely. Accustomed to humans, the monkeys were daring enough to hop onto any unsuspecting visitor, especially if they have food on them. 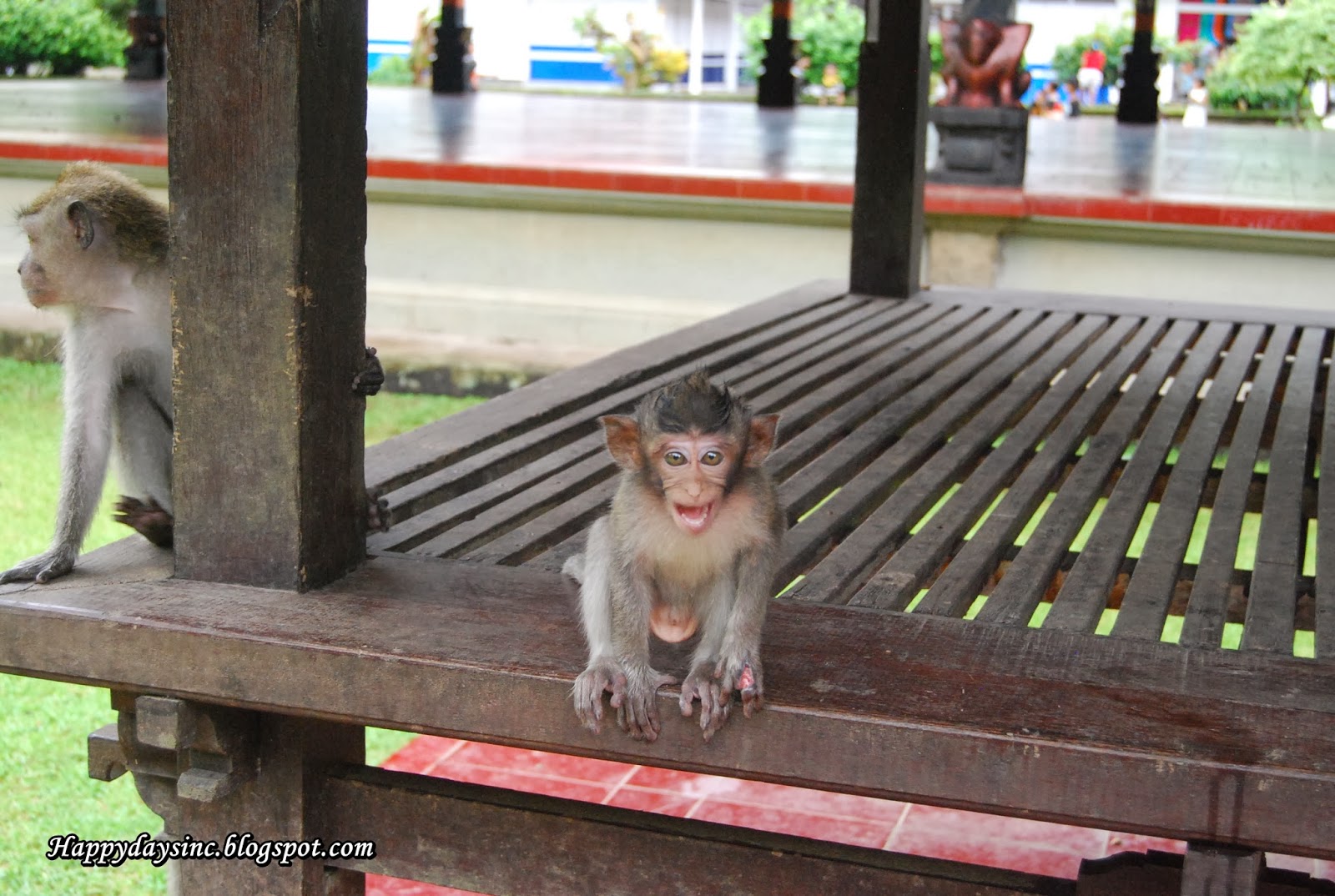 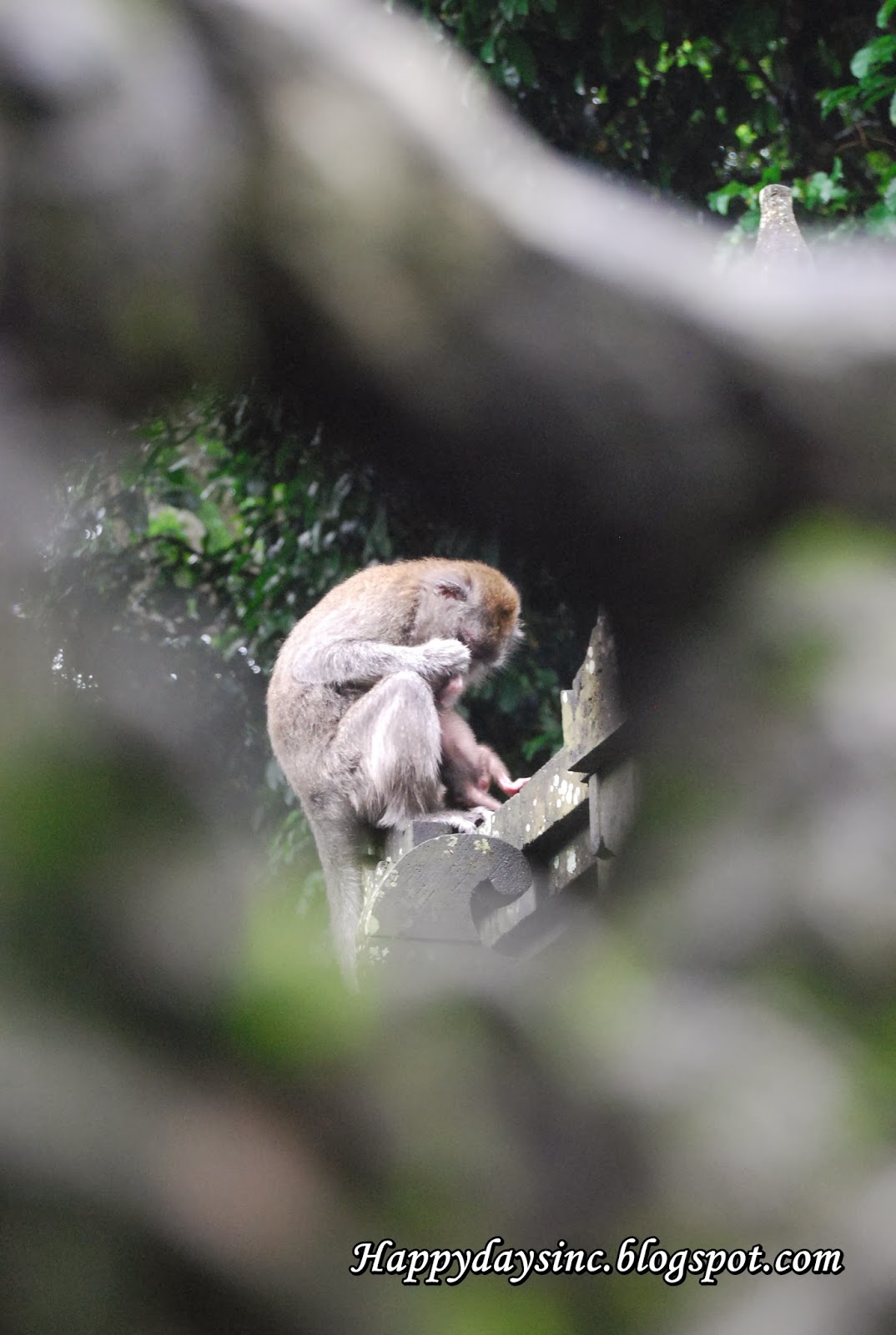 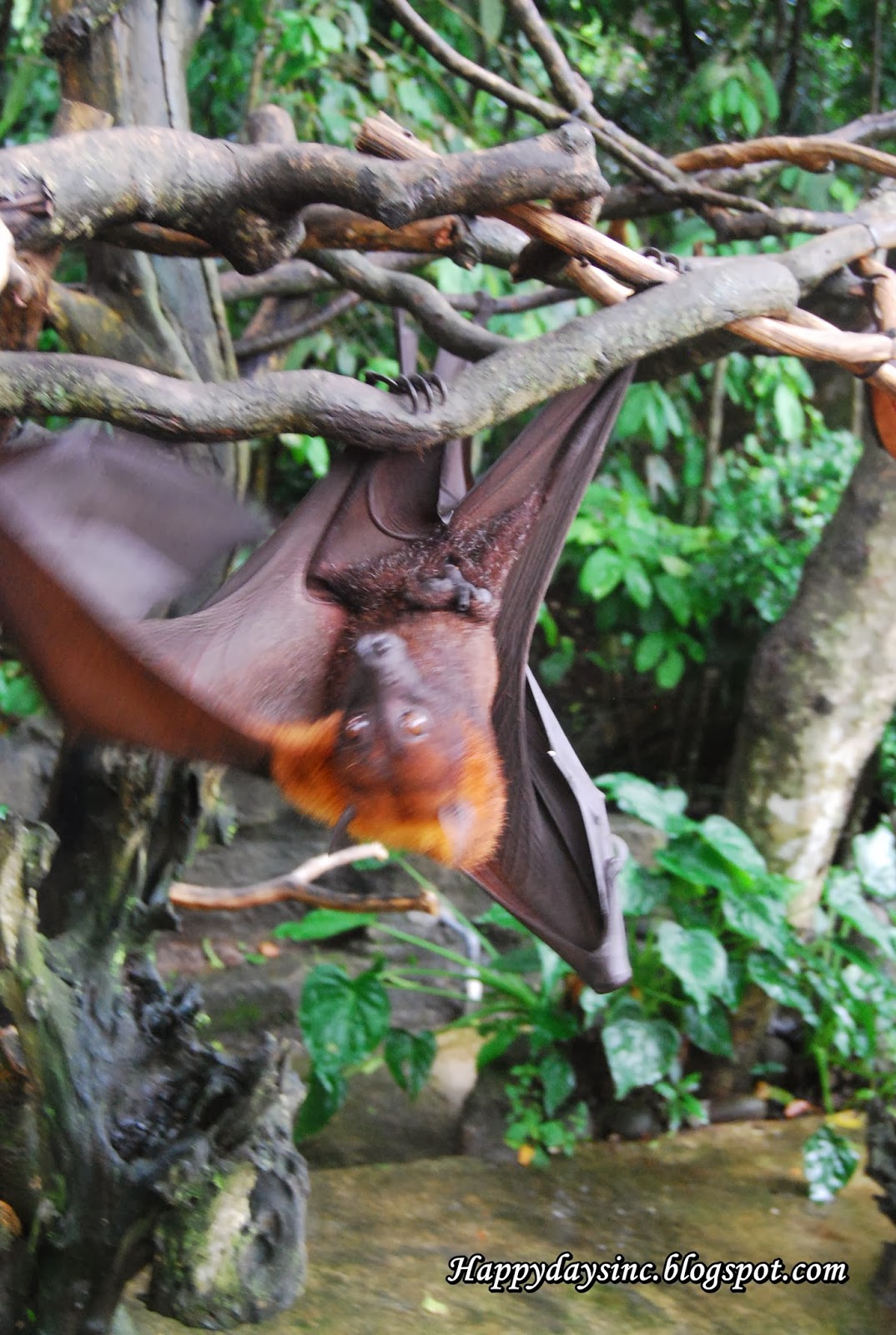 A lot of the monkey groups had babies with them and it was fun just watching the antics of the young ones and older monkeys. But what really broke my heart was the sight of a baby with a skin condition and a broken tail. The tail was snapped to reveal bone and the remaining part dangling undoubtedly painfully behind it. It looked infected. It kept whimpering and crying for its mother which later came to comfort it. We asked our guide if anything can be done for the baby and she said, "No, it sick. Leave it." 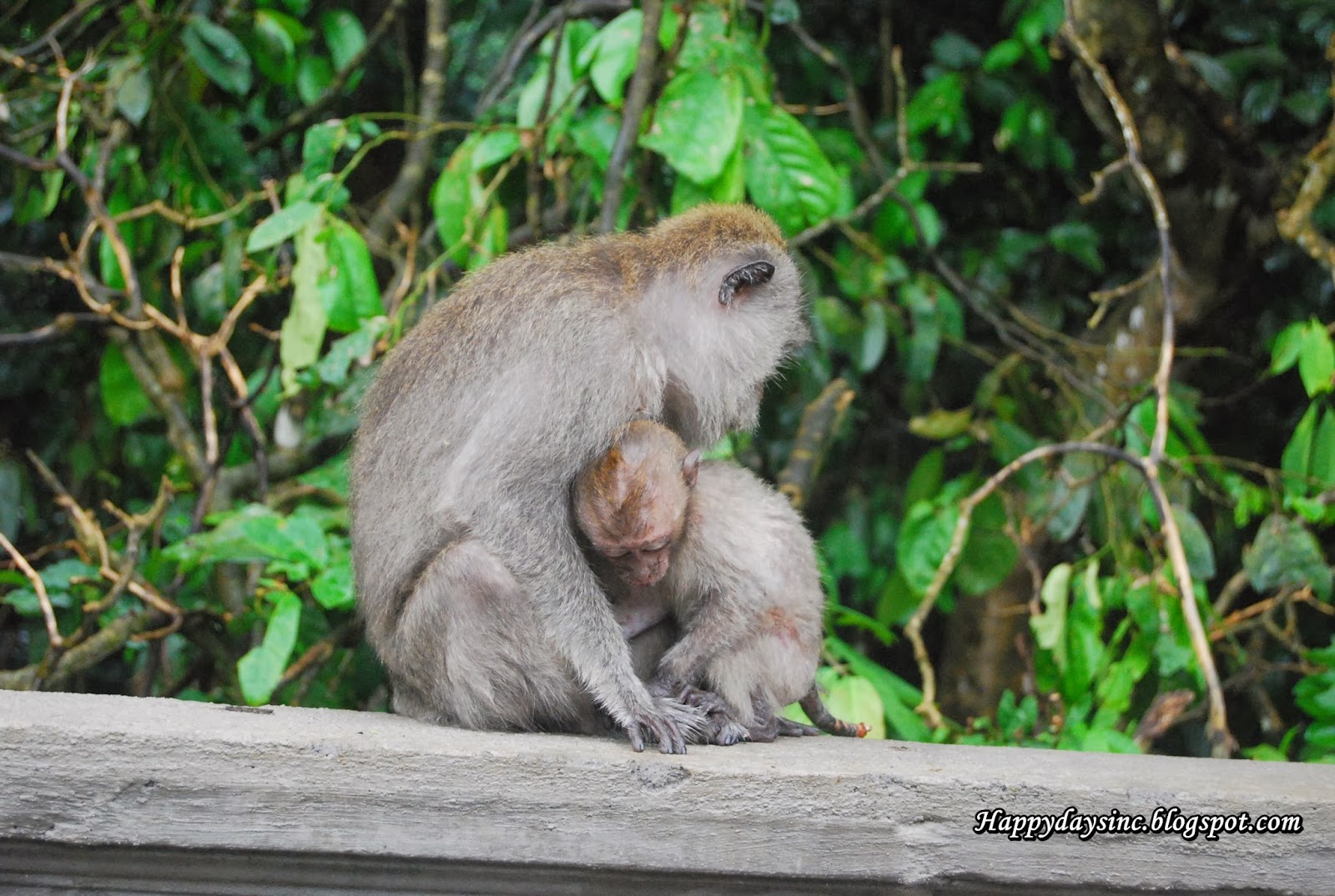 Yes, we can see that it was sick but the question remains there was a vet at hand to help it. Even if animal welfare isn't their primary concern, surely it would have occurred to them what would happen if a sick monkey bit a tourist. I mean, some of the entrance fee could go into looking out for the welfare of the monkeys at the temple. 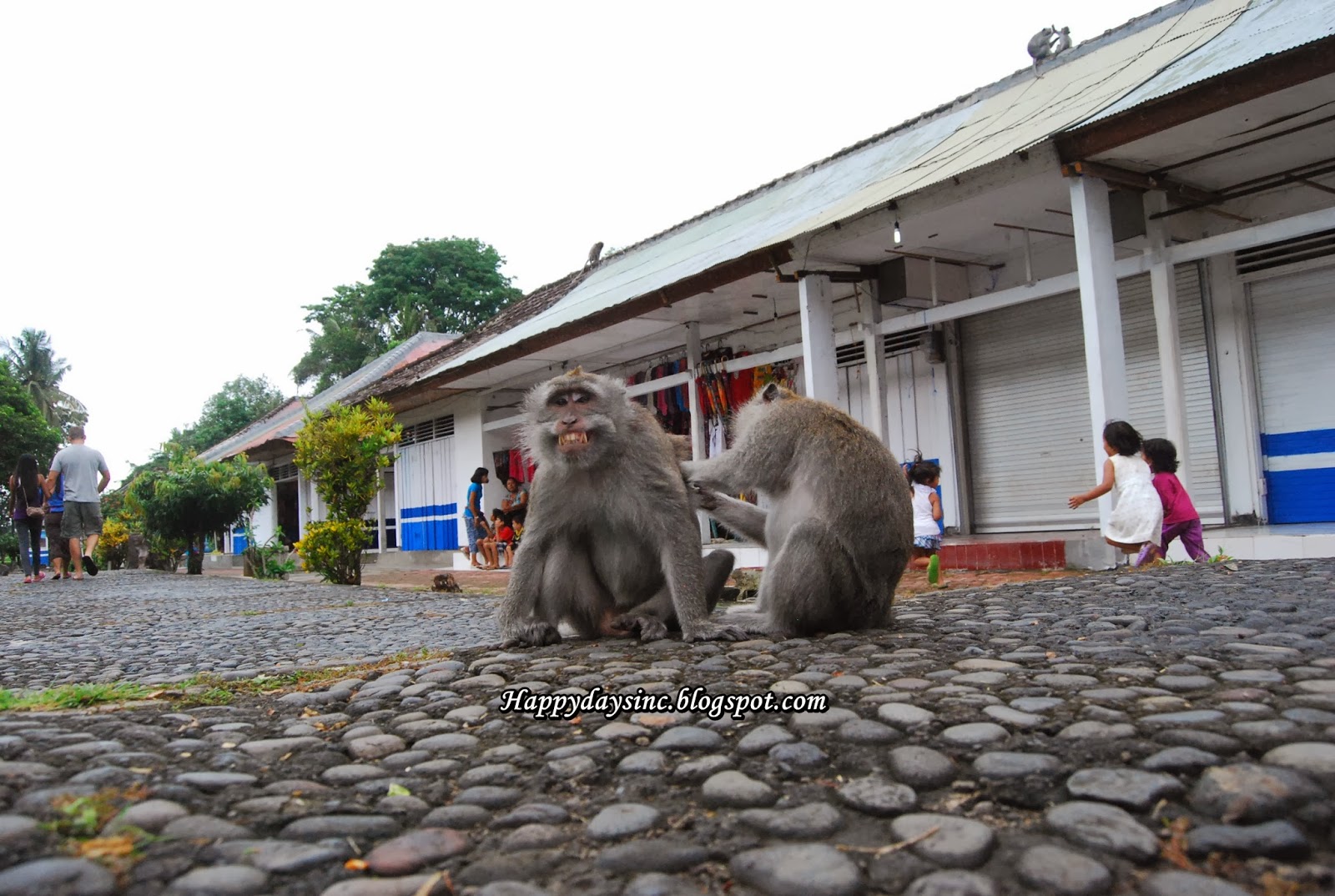 With little choice, we resumed our walk around the area and the guide finally led us to her shop. Not really in the mood to shop, we cut that part short and returned to our tour guide who announced that our next and final stop was the famous Tanah Lot. 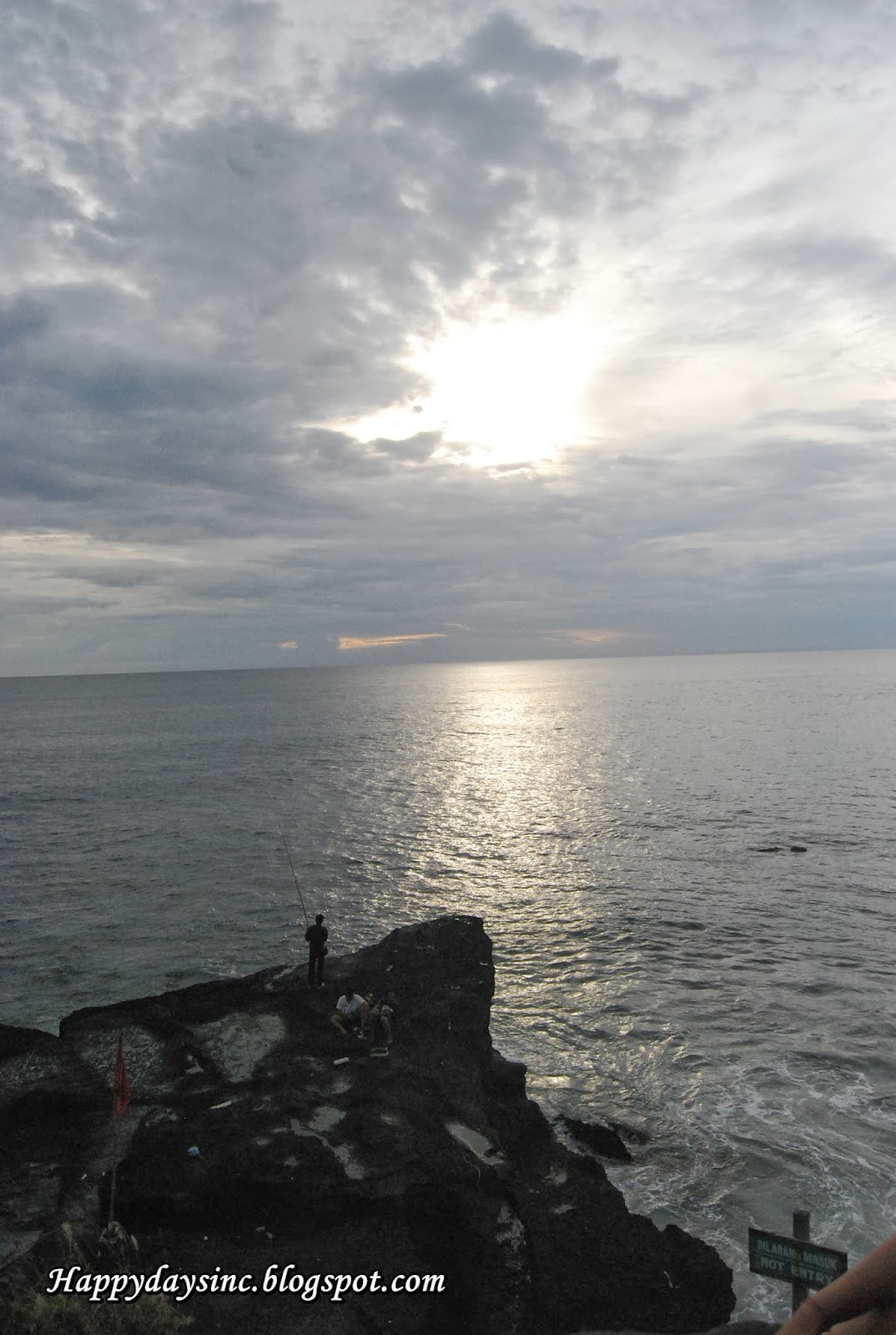 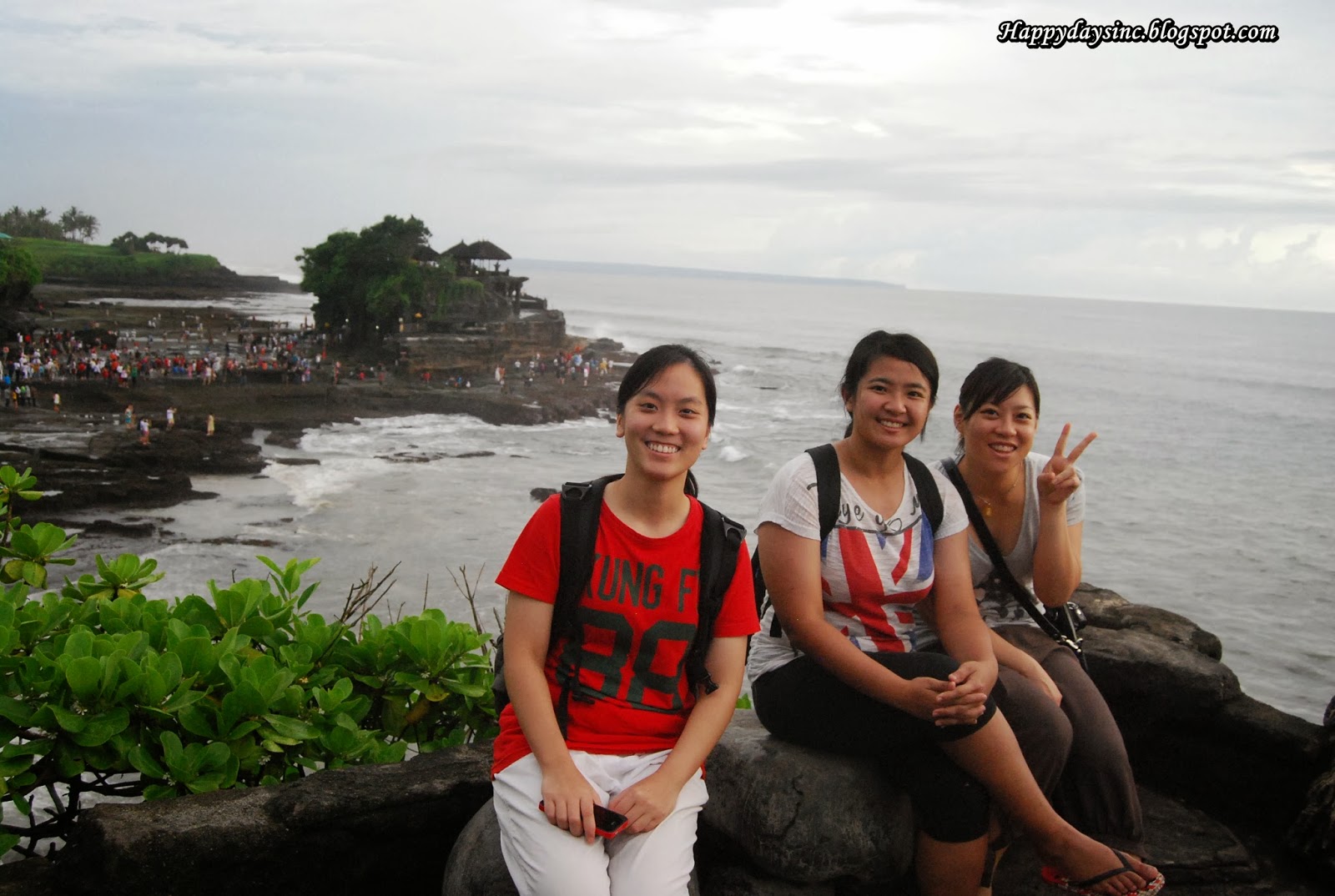 The ever popular and iconic Tanah Lot temple was crowded with tourists flocking there in hopes of catching a stunning sunset. Unfortunately it was cloudy that evening so our photos turned up dark but it made an epic shot with the crashing waves in the background. On the site, there were two obvious popular attractions which was the holy snake and the holy water.  The snakes based on what I saw on Youtube videos were several black and white sea snakes and the holy water at the foot of Tanah Lot was said to be spring water that came from beneath the temple. These were of course not free as a small donation was needed. 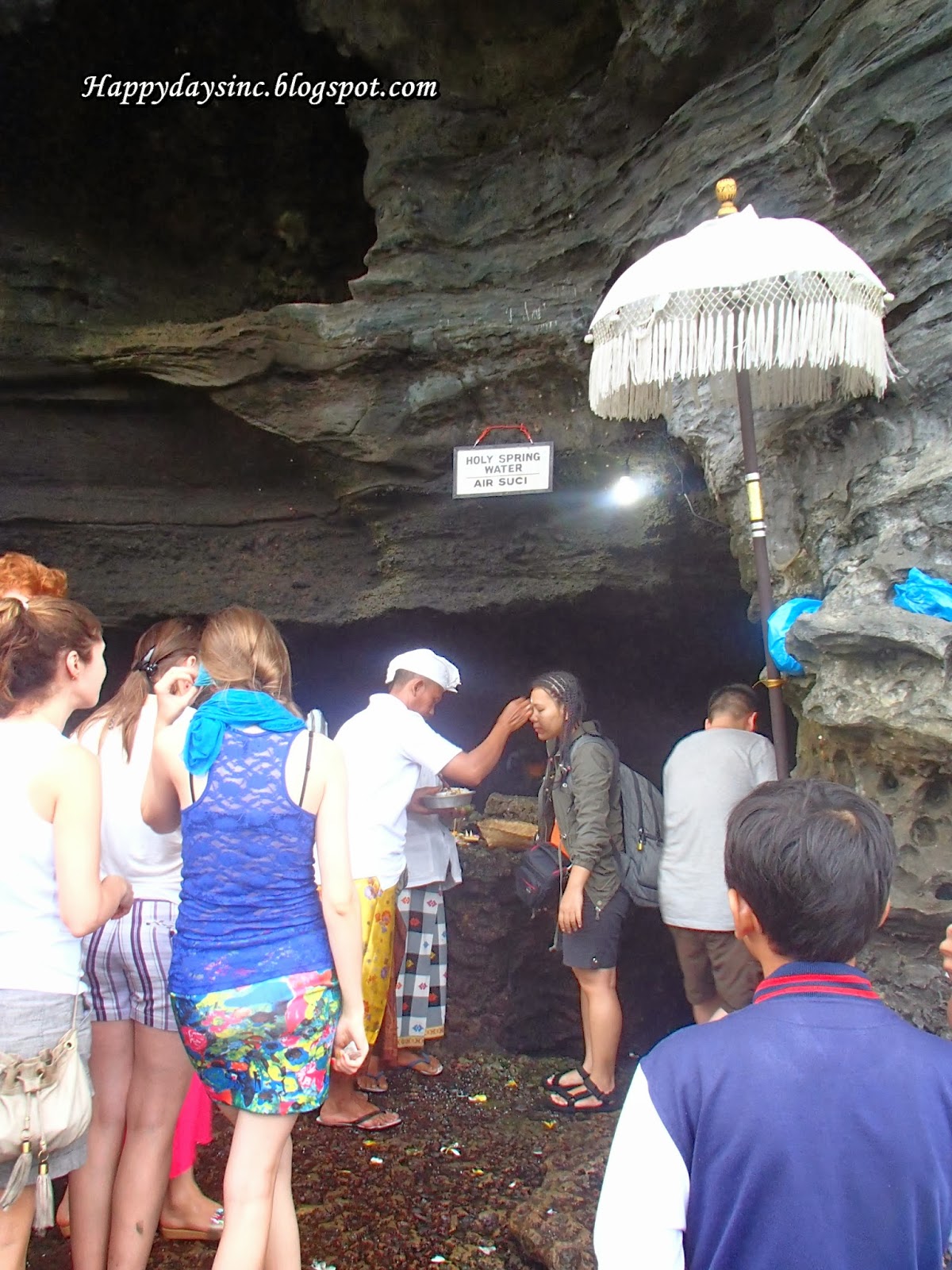 We spent quite some time trying to capture photos of the waves or in my case, doing a selfie with a wave on a rock platform next to the temple and watched as the sun disappeared behind a puff of clouds from our sight. I suppose that counted as sunset? 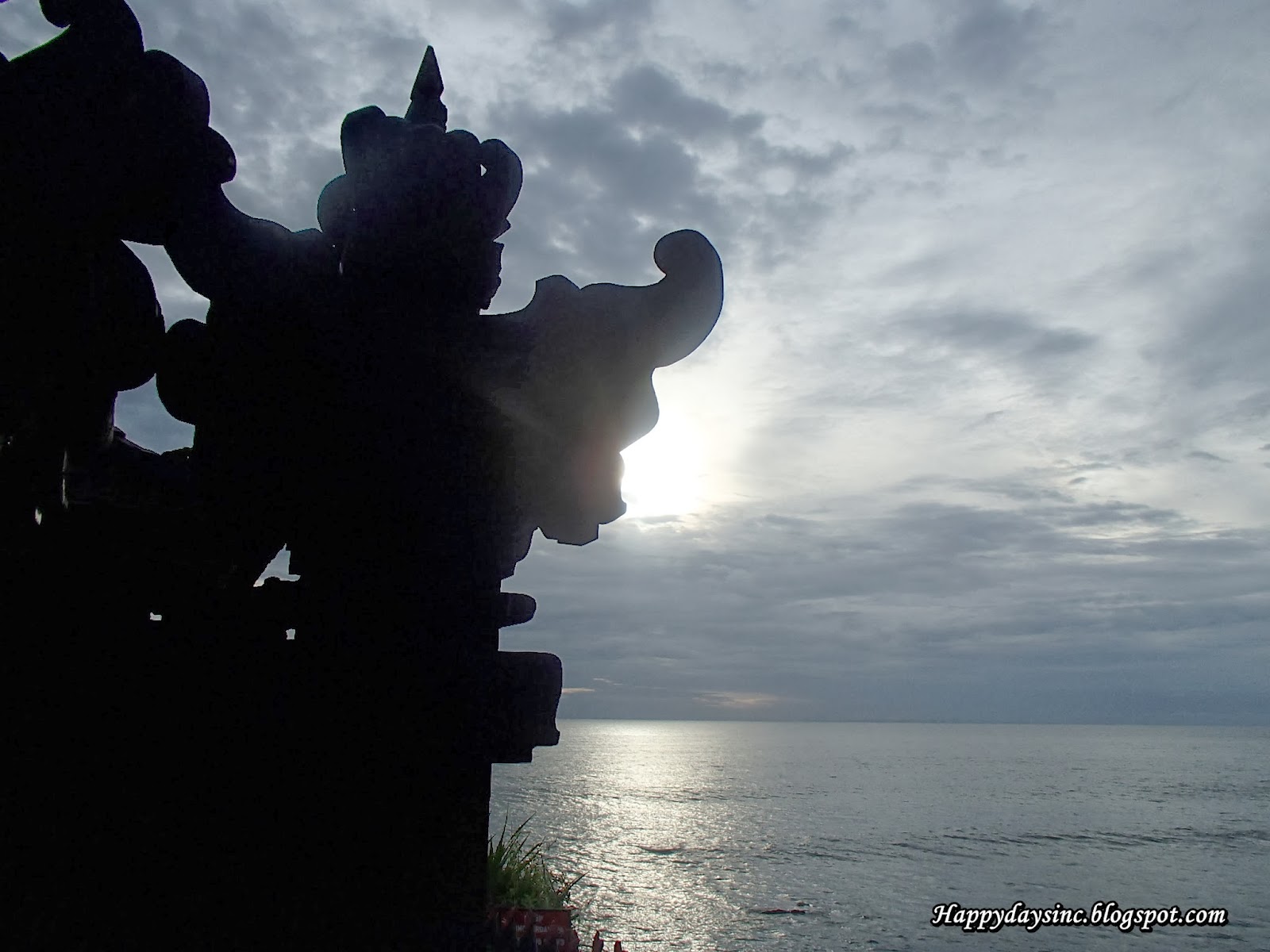 It was back to our Ubud hotel after that and we chatted with Mathir along the way about babi guling and other activities around Bali. Throughout the tour, Mathir had been a good and knowledgeable tour guide. He was accommodating too when one of my friends wanted to stop at a rice field to take a photo. Mind you, it wasn't a touristy rice field and was alongside a dirt road...

Altogether, inclusive of the entrance fees, lunch, tour guide, driver, a comfortable van (we slept a lot in it) and a bottle of water, the entire tour package cost USD50 per person. Money well spent I would say as getting a tour guide and driver removes the hassle of hiring a taxi driver to get from attraction to attraction without burning a hole in our pockets. 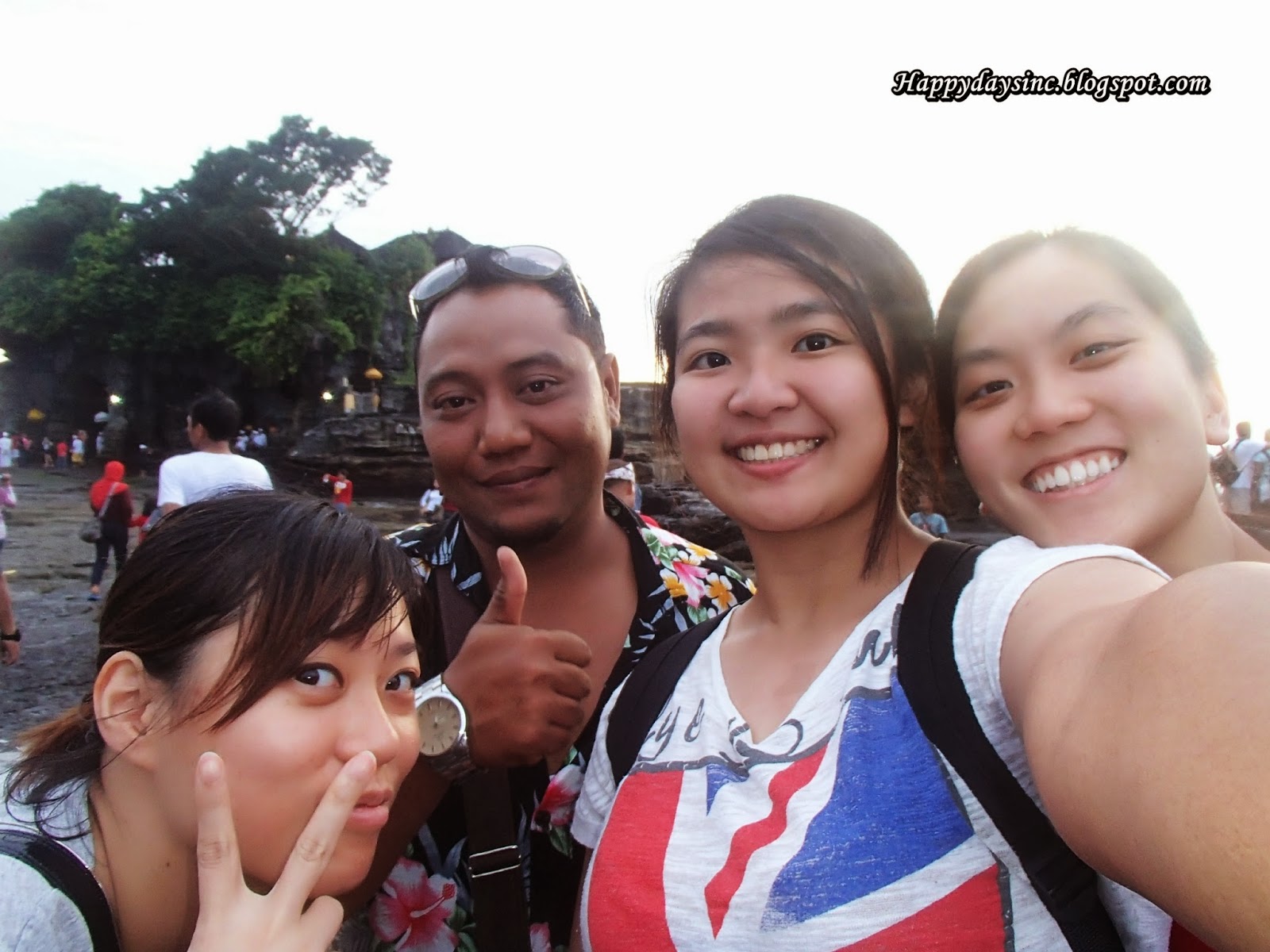 I would definitely get in touch with Febris Bali Tour the next time I am in Bali. Thanks, Mathir and Putu!

To view more photos of my temple touring, click here.

Wow, amazing blog layout! How long have you been blogging for?
you make blogging look easy. The overall look of your website is
wonderful, as well as the content!

Nice post, im totally agree with "A lot of the monkey groups had babies with them and it was fun just watching the antics of the young ones and older monkeys. But what really broke my heart was the sight of a baby with a skin condition and a broken tail. The tail was snapped to reveal bone and the remaining part dangling undoubtedly painfully behind it."