It started raining early in the morning on the day we had planned to go to the outskirts of Kyoto to visit the serene Arashiyama. But undeterred, we stuck our plan, borrowed umbrellas from Hana Hostel and caught the bus near our hostel to take to the Randen train from the Nishioji-Sanjo station (Stop A4). Spotting the little train station was tricky as we were expecting one with ticketing machines and train attendant but this stop resembled a bus stop along a set of railway tracks. 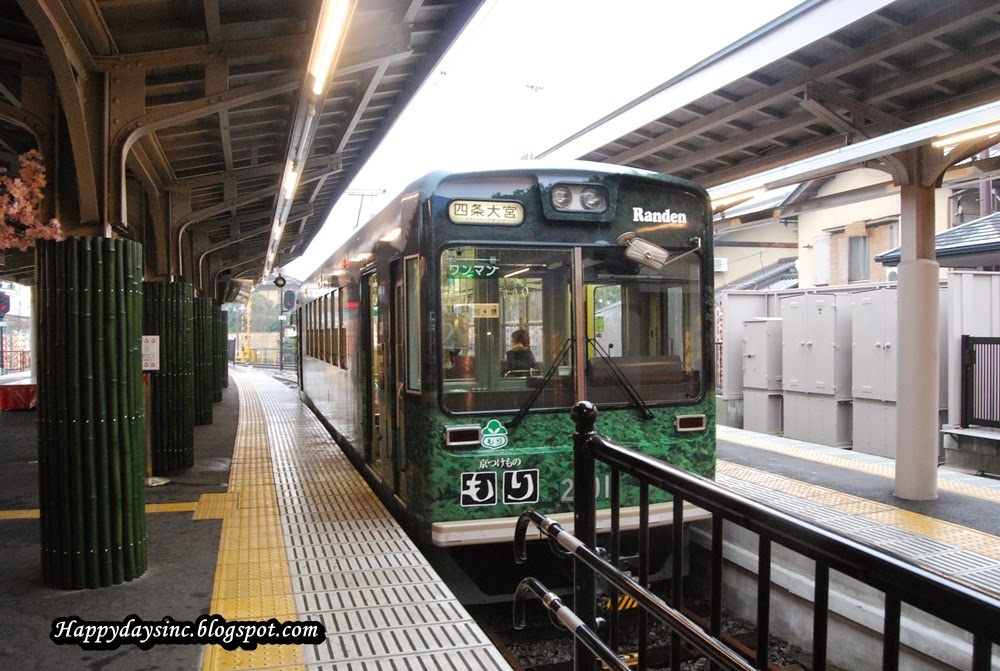 We didn't need to wait long before long the Randen train pulled up and we boarded it. The rain stopped for a while when we arrived at the Arashiyama station (Stop A14) and we were tempted to drop by the foot spa at the station platform to combat the cold weather. But we decided to visit the UNESCO world heritage site, the Tenryuji Temple first which was a very short walk from the station. Entrance to the temple grounds was 500yen and an additional 100yen could be added for access into the temple itself.

We spent an hour walking around Tenryuji's gardens and admiring the many types of flowers despite the constant downpour that started up soon after we reached the temple. Having survived centuries in its original form, the gardens were very zen and quiet with a mysterious atmosphere due to the rain 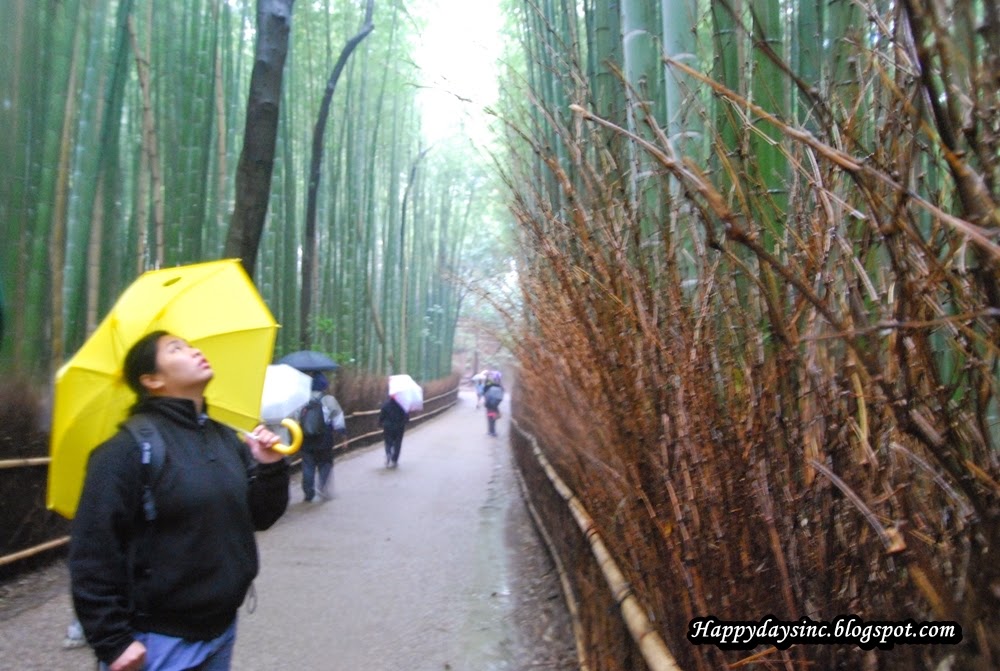 The famous Bamboo Grove Road was right next to the exit of the gardens and already a lot of tourists had picked a spot at the start of the road to take photos. Alongside the grove was the Sagano Scenic Railway which now and then a train would go by. 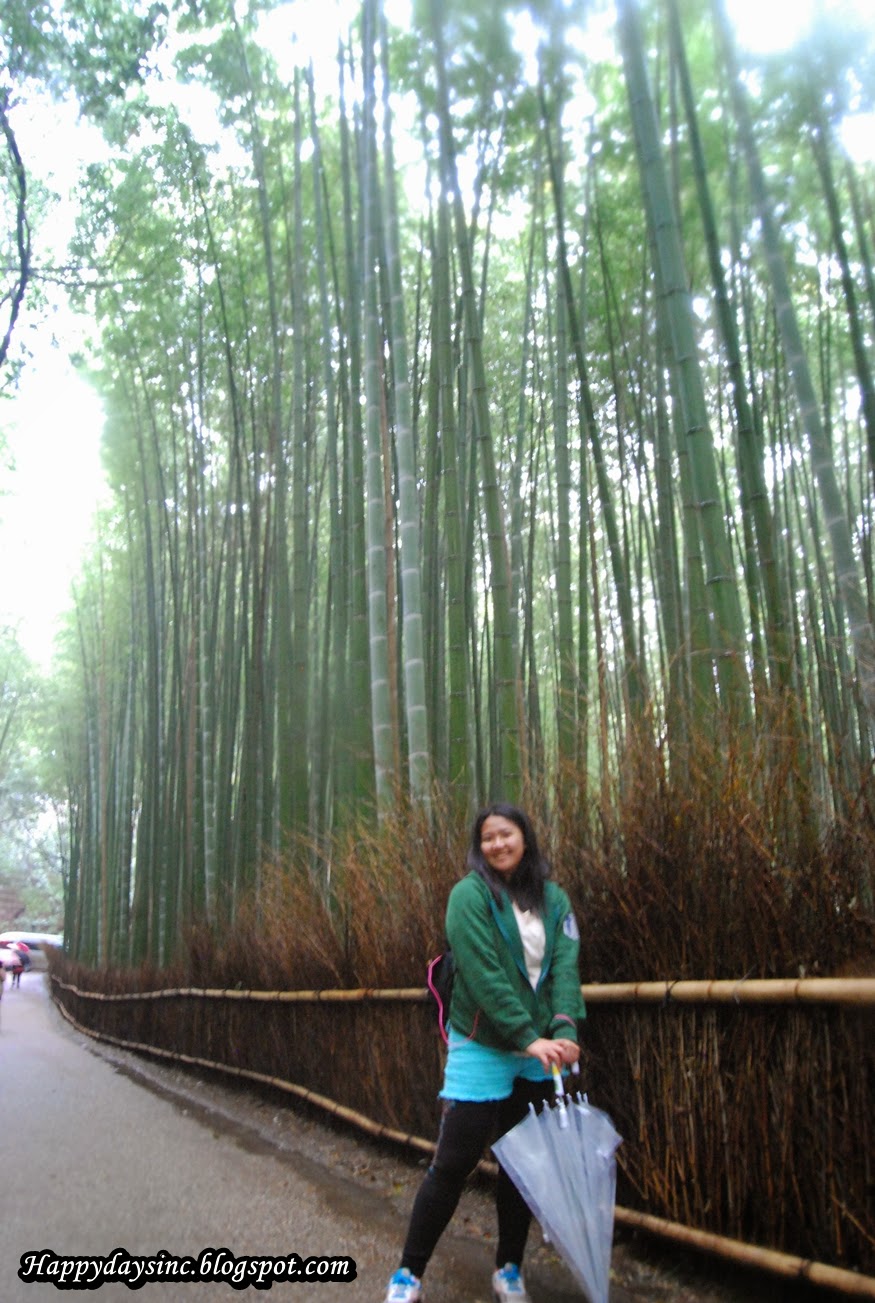 After trying to take a few customary photos without anyone in the background (and failed), we took a nice slow walk back to the main road and headed towards the famous Togetsukyo Bridge that ran across the Katsura river.

Along the way, we stopped at few souvenir shops and I ended up buying an umbrella with a katana handle. When I used it, we found out another special feature of it; when wet, symbols of the Japanese clans will appear on the umbrella. By now, the cold was getting to us. It didn't help that Arashiyama was pressed up against the hills, making it chillier. Throw in the mist from the river and we could barely remove our hands from our pockets to take photos of the bridge and river. It seemed that when the cherry blossoms were in bloom or when it was Autumn, river banks would make a stunning backdrop to the small town. A reason that warrant another visit here in future. 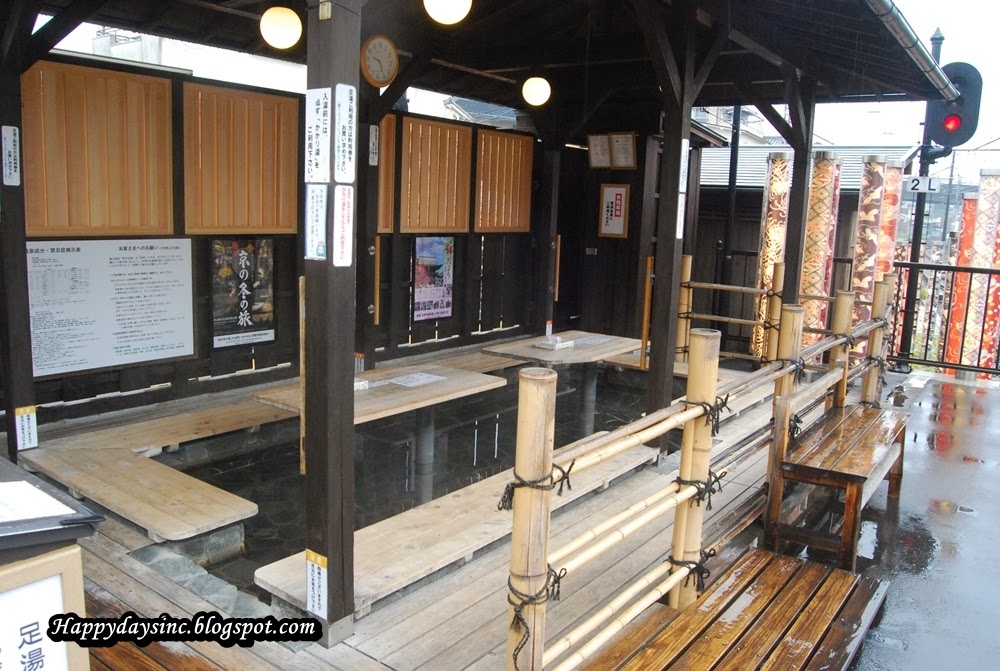 When my camera lens froze up for the umpteen time, we called it a day and started back to the station to warm our feet at the foot spa. Tickets and hand towels were available at the information counter and after paying 200yen per person, we headed to the spa, towels in hand. 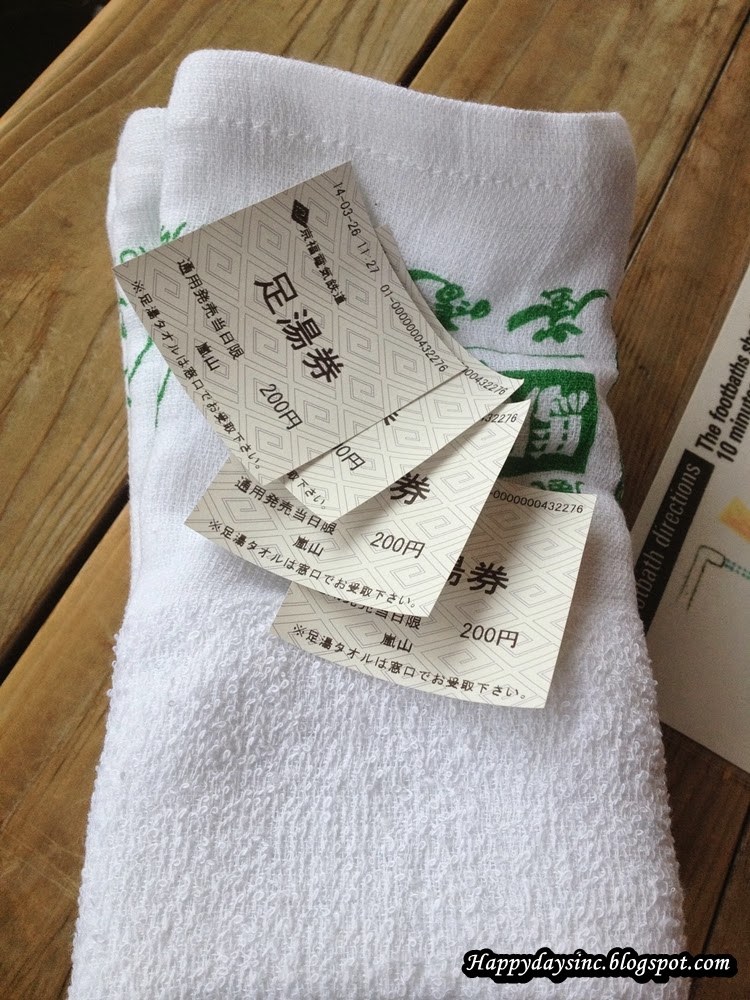 There was already a group of Chinese-speaking tourists when we got there and we quickly washed our feet, took a sit at the other end of the spa and sunk into the hot water. There was a shared 'Ahhhhh' as our bodies quickly warmed up from toe up. It was a wonderful experience given that it was still raining. Soon more people came, some even with packed food which to me, was a big no-no because what if the food fell into the water? 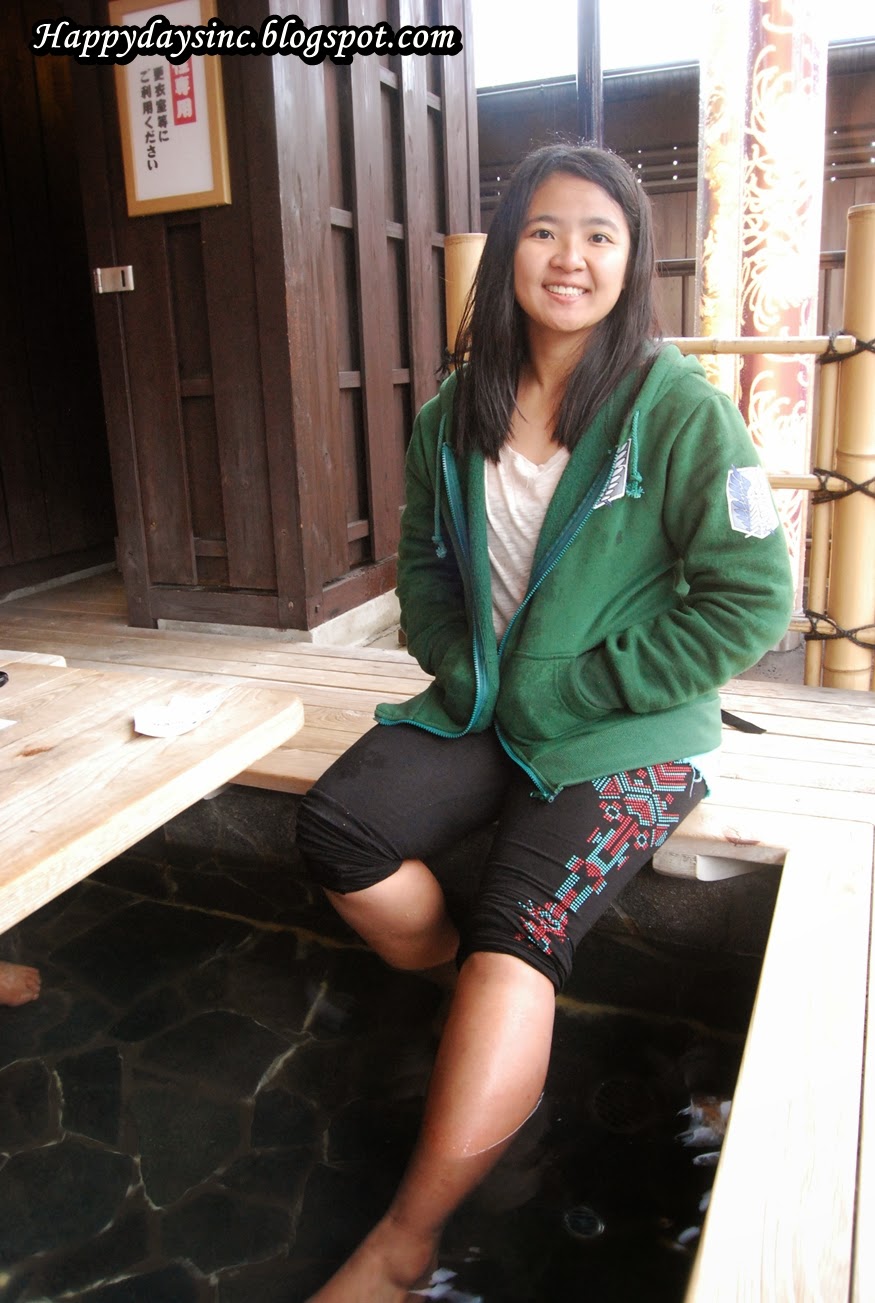 After 20 minutes, my group decided to leave as more people came. We hopped onto the Randen train and decided midway to drop the Kamo River Starbucks for a drink and a bite. We transited at Randen Tenjingawa station (A6) and took the Tozai subway train to Sanjo station which was next to the river and across the Starbucks. 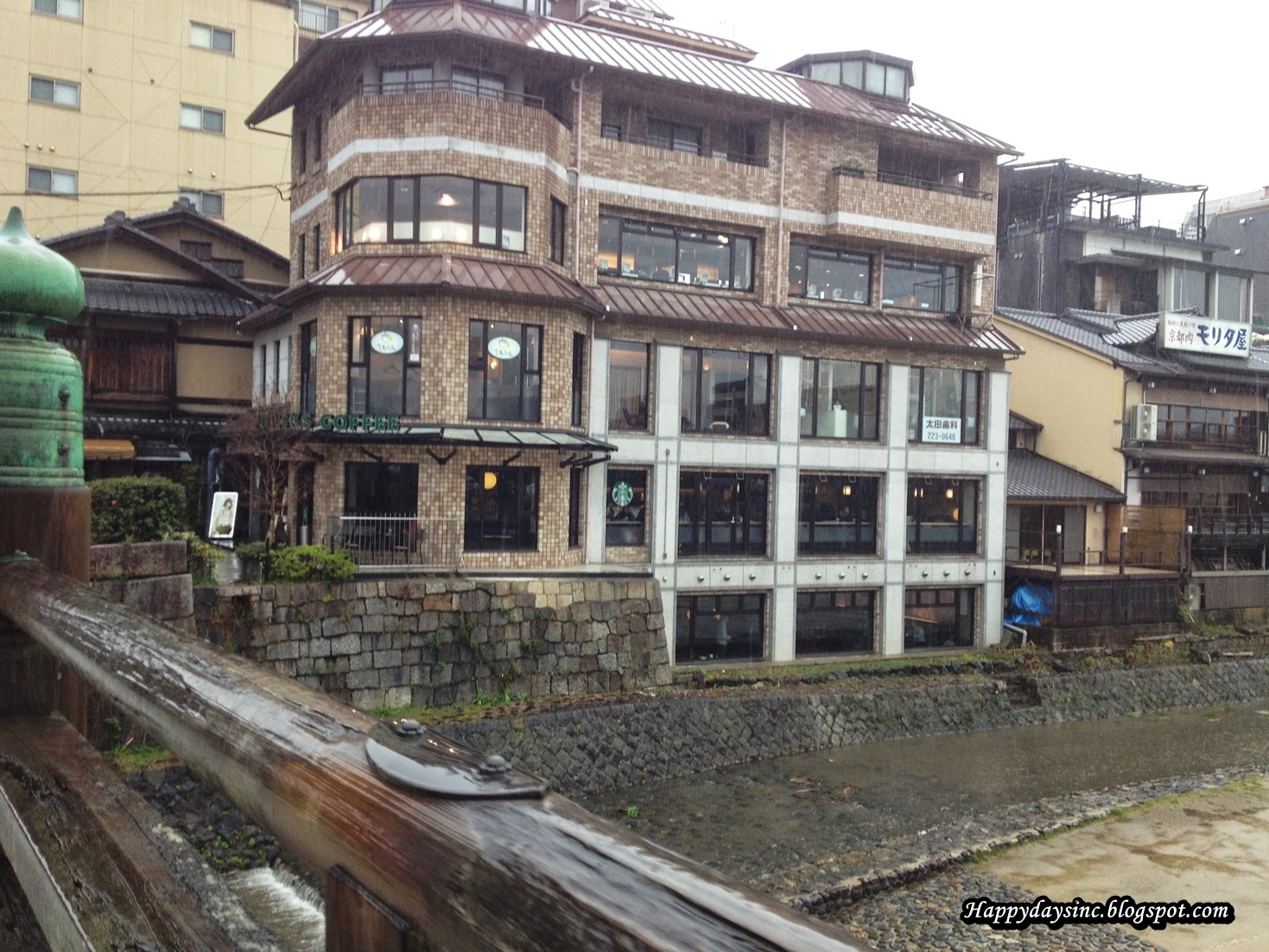 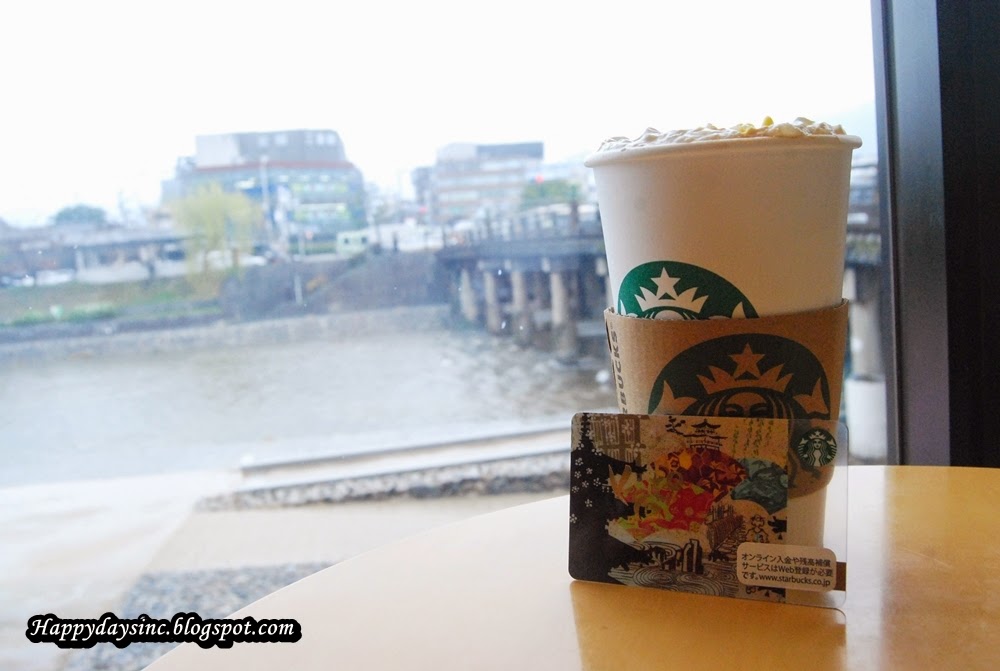 While enjoying the Lemon Swirl Latte and the view, we debated on what to do next as we had no plans from there on. After checking the internet, we opted to check out Nekokaigi, a cat cafe to get our kitty fix. Finding it was tricky as it was no where near any public transportation other than a bus stop and in an non-presumptuous building along a main road. 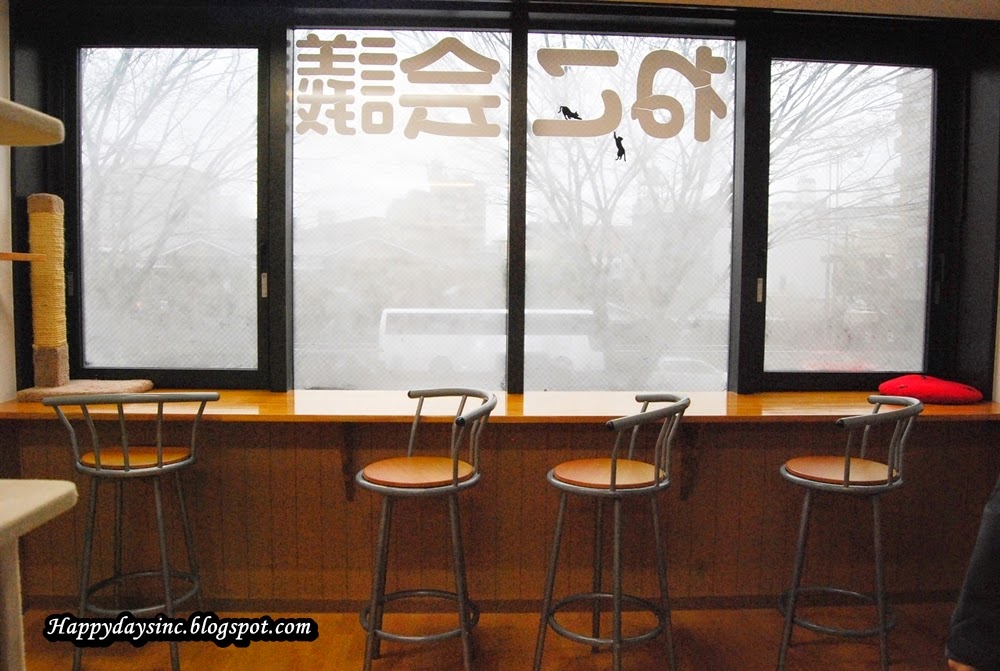 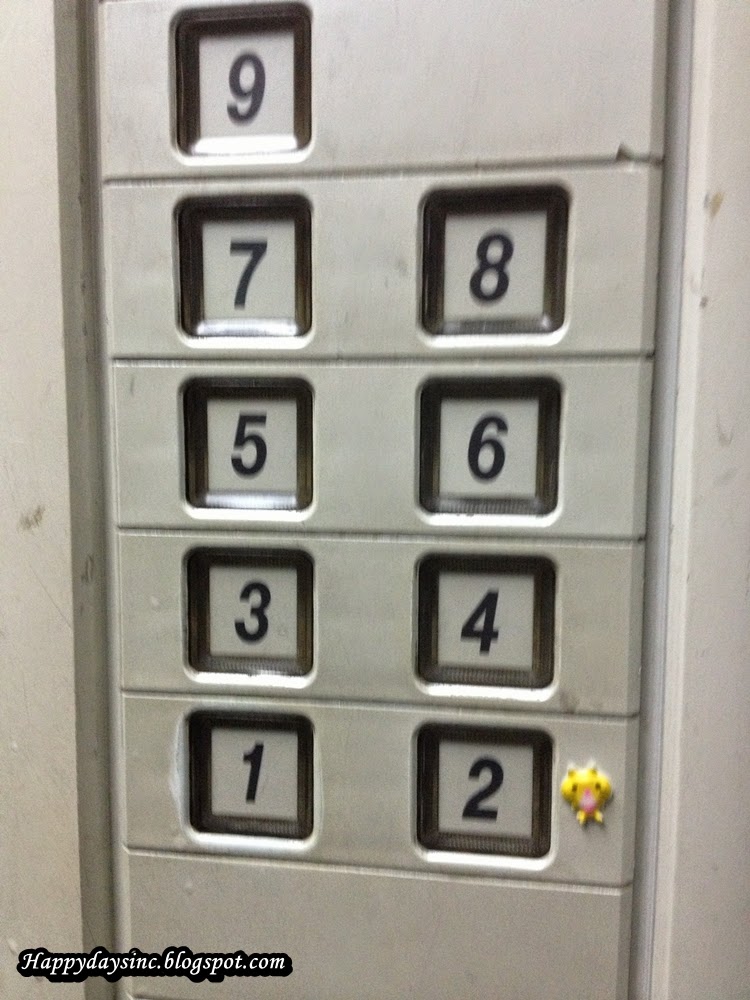 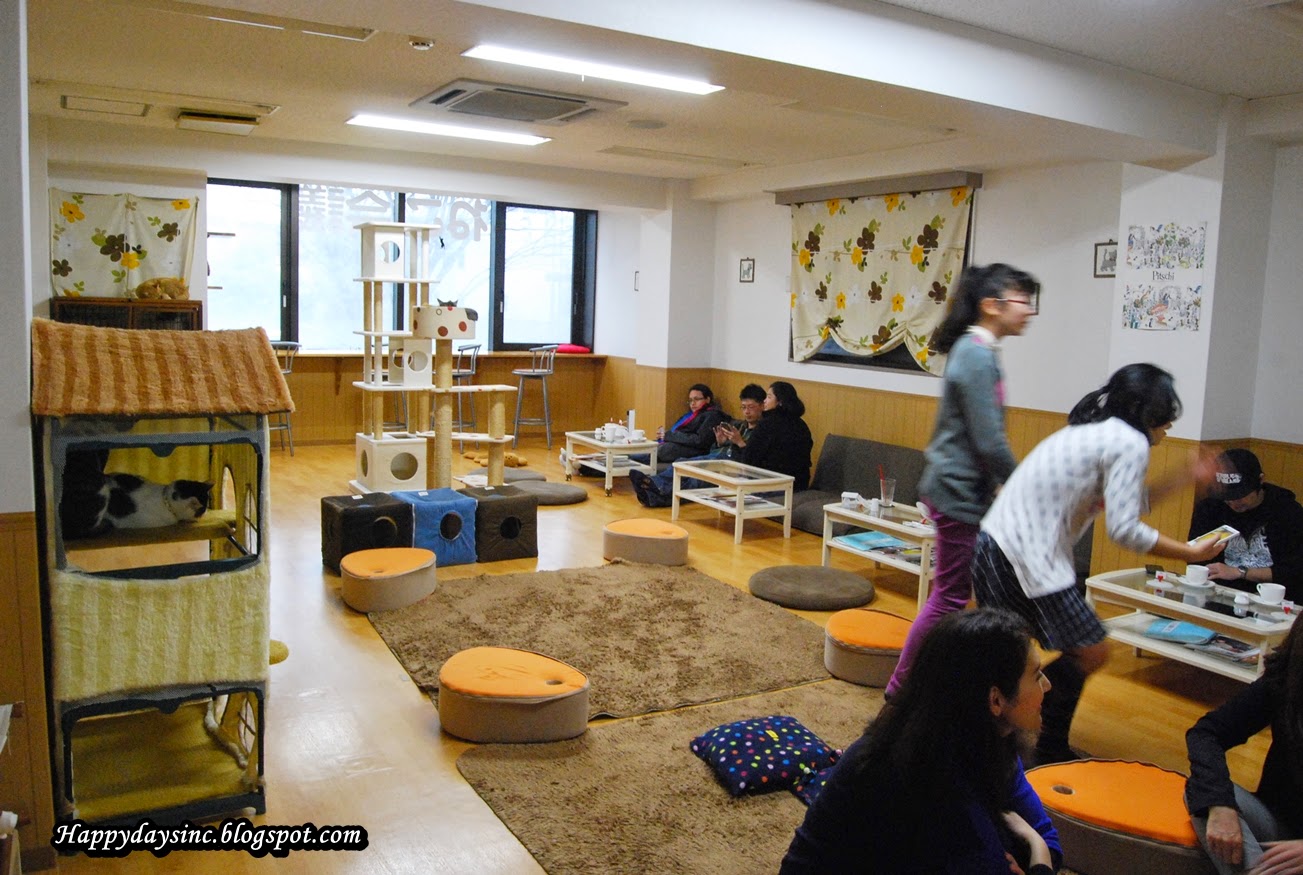 The cat cafe was on the second floor and we were greeted by the friendly hostess who indicated where to place our shoes and showed us the menu in English. While it was not compulsory to order drinks, we opted to order a drink each seeing as it started raining again outside and we wanted to be as comfortable as possible. 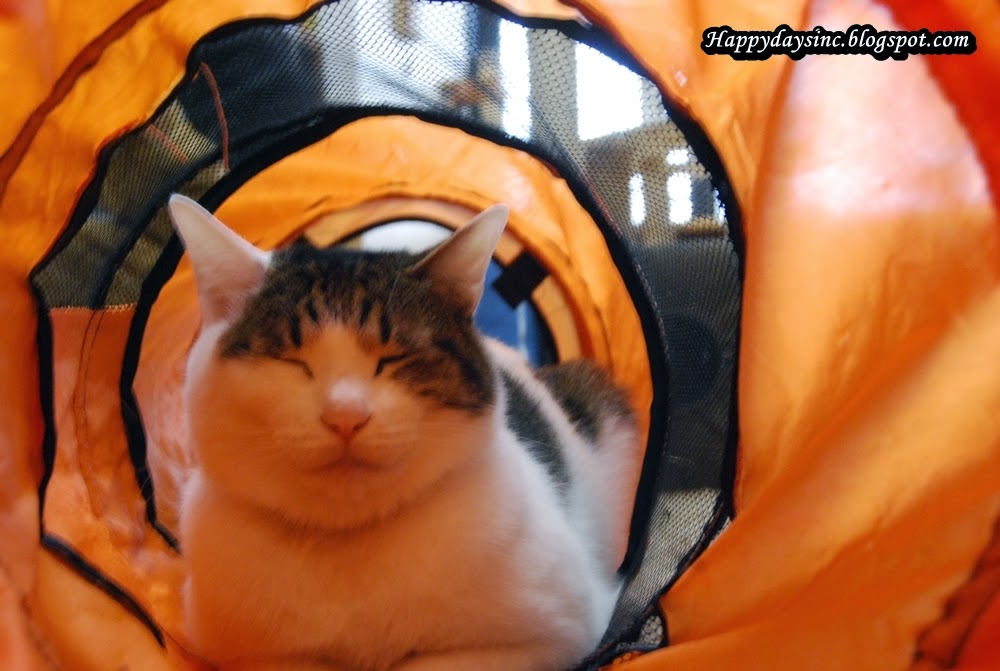 The cats immediately swarmed us as soon as we entered and kept away our bags in the lockers. I think it was because we had my cats' scent on us. As soon as they were done 'checking' us out, the cats went back to playing about and/or snoozing. All the cats in this cafe were beautiful tabbies, rescued and have different personalities of their own that endear them to customers. Now and then, one of the smaller ones would come up to us while we were sipping our teas and snuggled up to us. 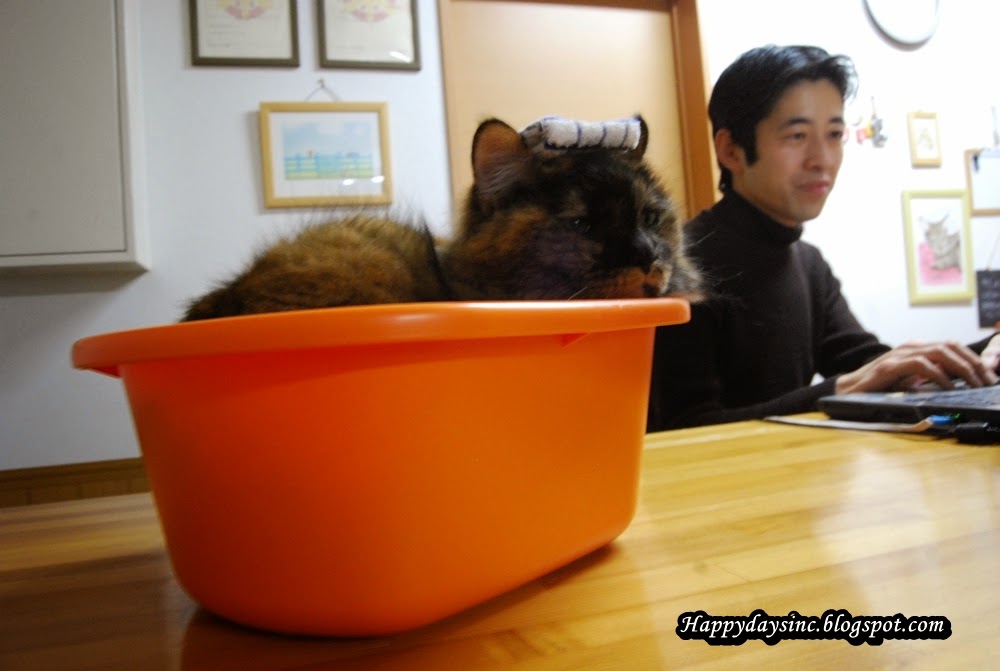 Our 1 hours with the cats ended fast and re-energized once more, we headed to Teramachi shopping arcade to walk around and grab a proper meal as we did not have lunch. Teramachi was shopping heaven, a long stretch of shops left and right of all sorts. We stumbled upon this little restaurant that served fried udon and okonomiyaki omelette. We were taken to the second floor and while our food was being prepared, we chitchat a bit with the American couple and a pair of Japanese boys from Tokyo who were in Kyoto on vacation. 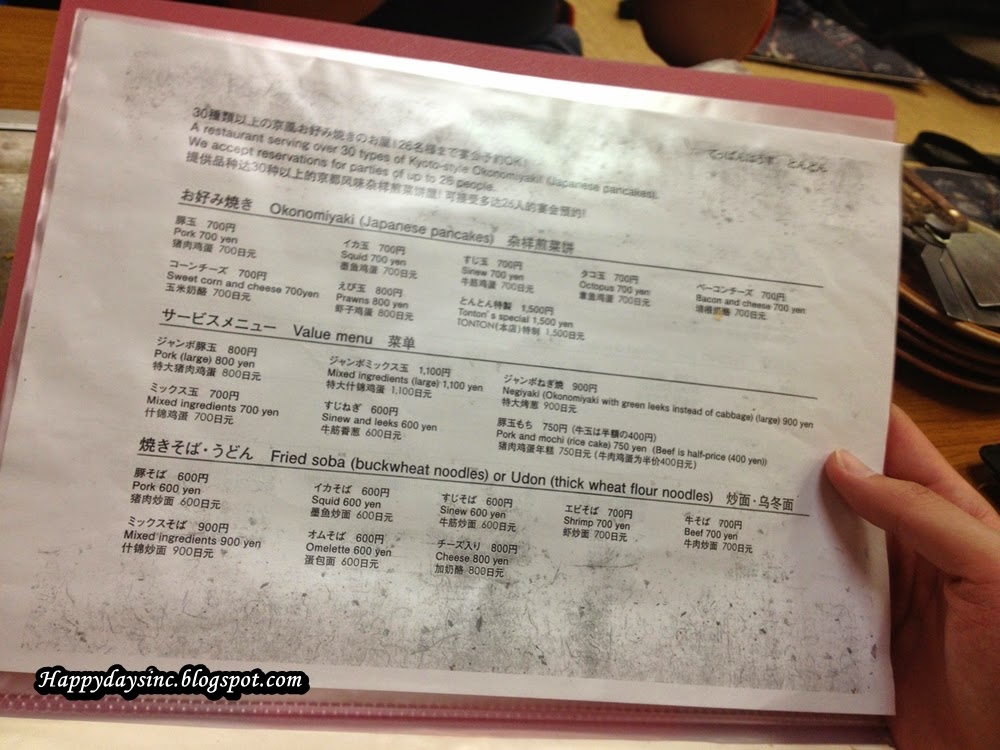 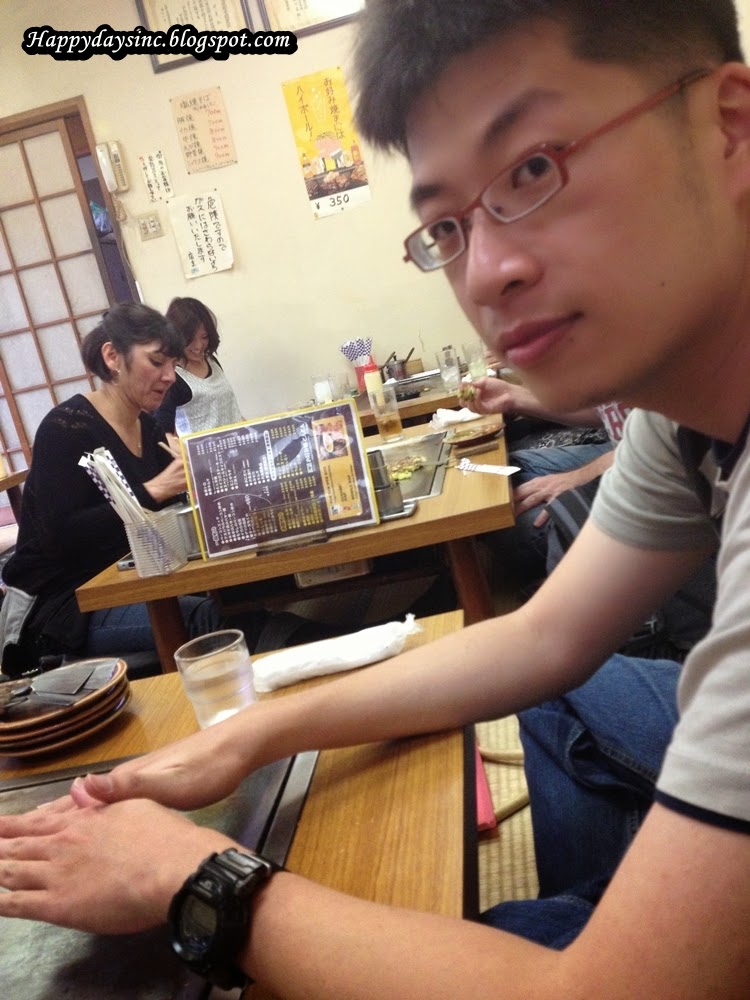 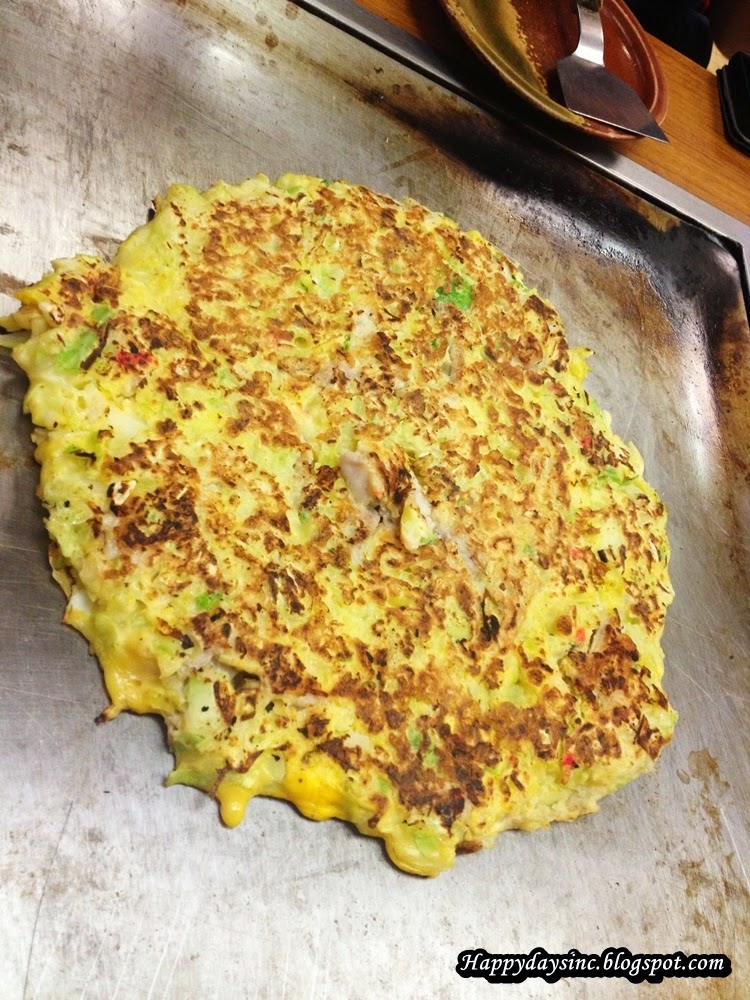 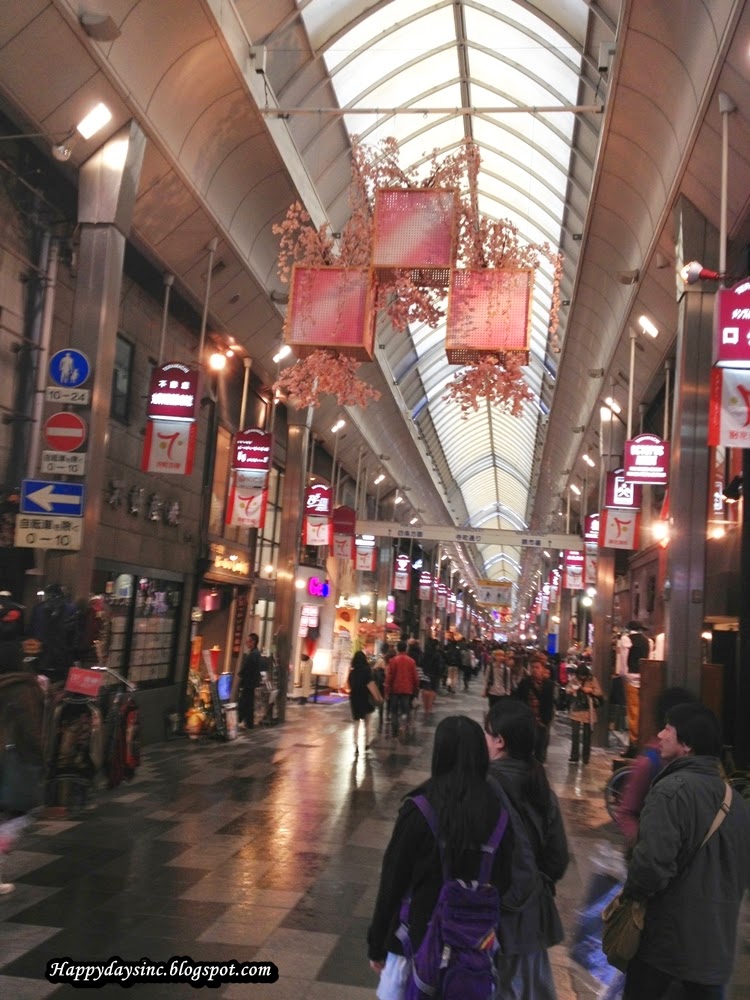 After lunch and walking the entire stretch of the shopping arcade, we hopped on to a Hankyu bus and rode it back to Kyoto Station, from which we walked back to the hostel to get some rest. As it was our last night in Kyoto too, we tossed a few of our clothes in the washing machine outside the hostel and headed to Sukiya for dinner which was just around the corner from our hostel. Surprisingly it was a long wait for us to get a table but the staff was very polite, patient and accommodating to us. 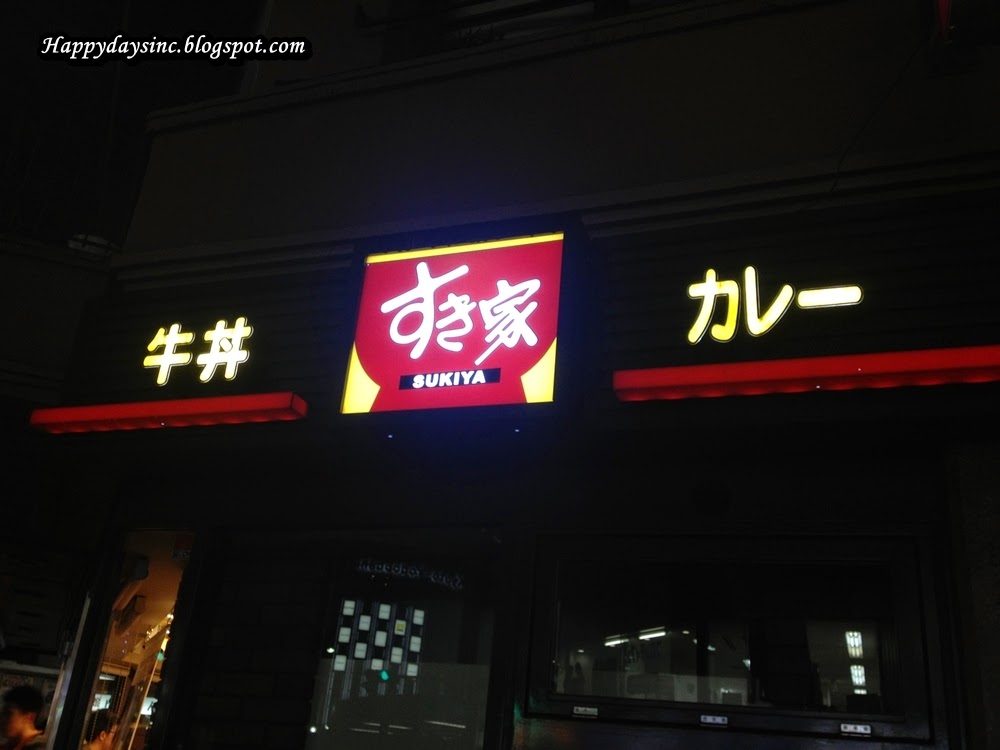 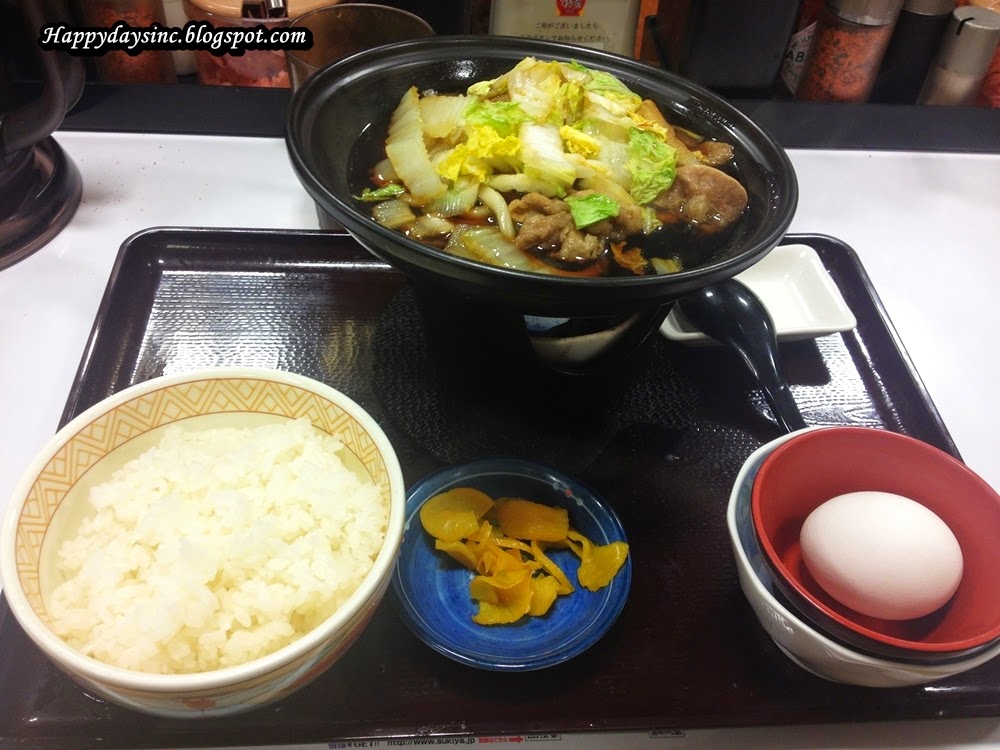 We were seated after half an hour and our food came quickly after that. With ample amounts of sliced beef and delicious soft rice, the meal was a comforting way to end a raining day and our stay in Kyoto.

Next up, we are off to Nara and Osaka with our luggages in tow!

For more pictures of Day 5, check out my photo album here: Kyoto Day 5

Foot spa is my favorite massage when I go Kyoto - Arashiyama & Cat Cafe Nekokaigi in japan that time i take best foot massager spa therapy
.Their spa therapy is famous in the world.