SCKLM: Run for a Reason and I am on TV!

Thanks to Standard Chartered KL and Essence PR, I was invited to join Rainer Biemans from Dirigo Events, organiser of SCKLM and Elena Koshy from Malaysian Nature Society on Hello On Two, an afternoon segment of TV2. While Rainer spoke about the run itself, Elena shared about how MNS' cause and how SCKLM is contributing and helping them. And that was where I came in as a runner for SCKLM and MNS. 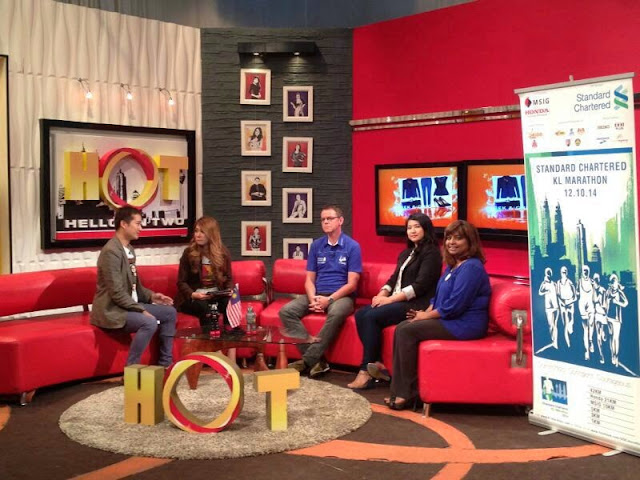 I basically spoke about why I was running SCKL Half Marathon and why I picked MNS to support which you can read all about in my previous blog post in greater detail (http://happydaysinc.blogspot.com/2014/05/standard-chartered-half-marathon-2014.html) 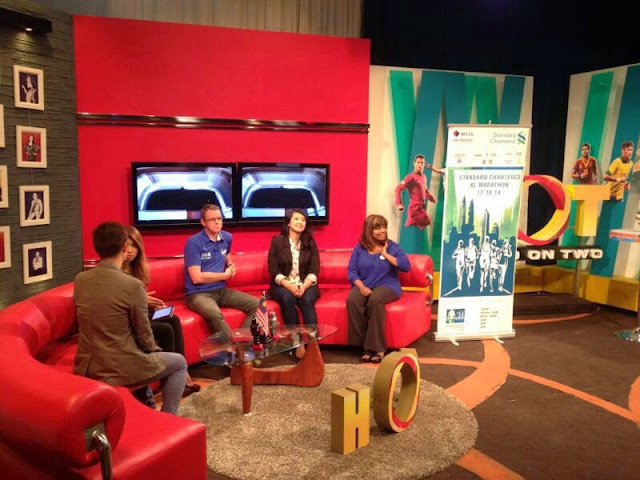 Honestly, it wasn't all that nerve-wrecking. Finding parking in Angkasapuri was even more nerve-grating than the interview preparation. Hair and makeup was done relatively fast, about 15 minutes compared to a magazine shoot's 30 minutes to an hour. The interview itself was only a 15 - 20 minutes for us and it passed rather quickly.

In fact, I was more concerned about cursing by accident on live TV. Due to the time limit, we were in fact asked less questions than expected which was a pity because I couldn't do a shoutout to my bootcamp friends who has been my most supportive donors so far.

Never mind, I'll just do it here: Thanks, peeps! You know who you nuts are! I am gonna throw a party for you soon! One of the chocolate kind!

Hello On Two hosts, Stephen and Sofea were very fun and engaging to talk to and they knew how to keep three guests from hording the spotlight and talking too much.

Anyway, if you miss the segment and want to watch it, donate first :p

To my existing donors, well, you have gained the privilege to watch it. Bare in mind though that I have not watched it myself so no spoilers ya! Here's the Youtube link: http://youtu.be/wI8dL130Nncf or you can just watch it below here. Just don't laugh.

Thank you Hello On Two for having me!

And if you want to help me save Mother Nature...
To donate, click here ----> https://register.kl-marathon.com/rfacs/donate/2530

To made sure I am the real deal and not a scam, check out my profile here ----> http://www.kl-marathon.com/charity/run-for-a-cause/runners-profile/40974

credits: Pictures courtesy of May Huen of Essence PR and video courtesy of Rainer of Dirigo Events.
Posted by Tania at 11:37 PM