It is finally happening! TGV Cinemas has finally graced my area with their presence with the opening of their outlet in the new (old) Jaya Shopping Mall in Section 14. It is reportedly scheduled to open by Christmas which means I would have an official neighborhood cinema just 10 minutes from my house before the end of the year.

Yay! No more driving to crowded major shopping malls to catch a movie.

Jaya is but one of five TGV Cinemas that will be opening up before the year end. The first to open will be in Bukit Mertajam and Miri as their first foray to East Malaysia on Dec 18 and followed by Kulaijaya, Seri Manjung and Jaya by Christmas. 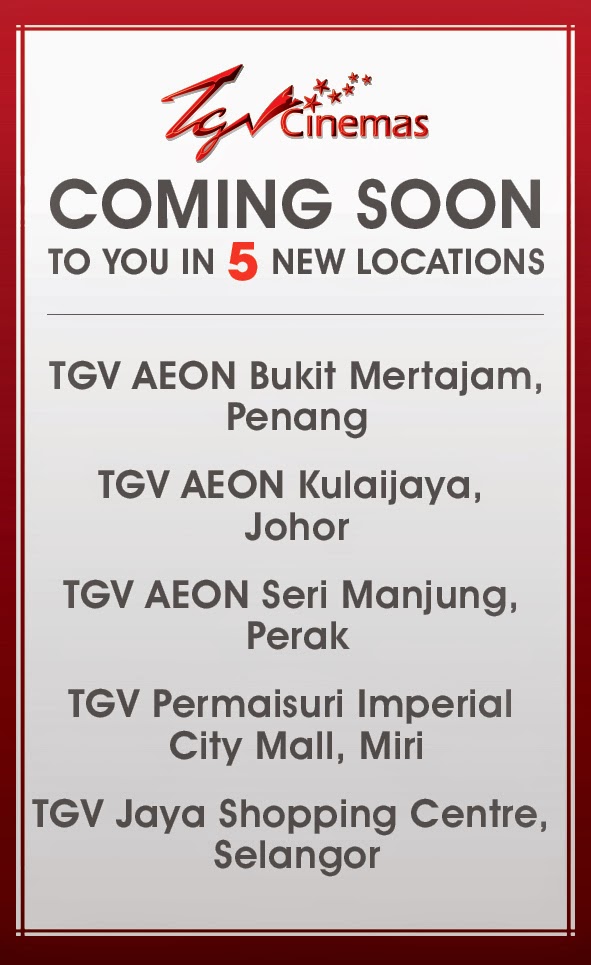 To celebrate the new cinemas, TGV Cinemas will be organising an Open House in each TGV Cinemas at the soft launches starting with TGV Cinemas PICM and AEON Bukit Mertajam. The Open House will includes free screenings of blockbuster movies for the public (you!) and also giving out 1000 popcorn sets at each location (while stocks last).

There will be free screenings on December 17 at 2pm and 5pm respectively of the Blockbuster movies of the year such as Maleficent, Transformers: Age of Extinction, Marvel’s Guardians of the Galaxy and Interstellar (okay, so maybe Blockbuster is too strong a word to use...)

In addition to the free screenings, TGV Cinemas will also be organizing the 30 Days of Goodies in all their new locations whereby each day, customers can claim a free goodie from TGV Cinemas such as movie passes, popcorn and drink vouchers as well as movie premiums.

Of course, the only way to get the latest updates on TGV is to just join the TGV MovieClub and you could even score some exclusive premiere screening tickets to your favourite movies (mine's Avengers and I am pretty sure TGV would know that by now)

Jom, let's go watch movie there when it opens!