It was almost 4:15am, our supposed check-in time for Hurricane Heat and my sister and I had no idea where the supposed meet-up place was. The email told us to gather at Canary Gardens, Bandar Bestari, Klang at the Finishing Arch of the Spartan Super to held later on that same day. But when we got to the garden, it was pitch black, no one was in sight and the stench of haze lingered in the air. My reaction was...well, f**k. 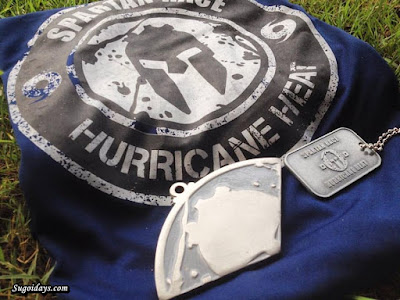 We brisk-walked up and down the empty park looking for the Finishing Arch and then we heard it - the sounds of Spartans - counting out burpees in unison no doubt. Following the noises, we finally spotted a man standing on a small hill with a megaphone. "Are you here for Hurricane Heat?"


We nodded as we jogged up the hill. A few more participants joined us at this point.

"Hand over your waiver form and get your gears inspected." he pointed to the half-inflated Finishing Arch which was directly right behind the hill. Under it were tables and staffs ready to check us in our first Hurricane Heat in Malaysia.

Behind the setup, we could see two guys pushing out burpees and behind them were the gathered Hurricane Heaters for 50-60 people all clad in black. I was asked to show my gears from the mandatory gear list also sent in the email.

I was through and heart-thumping from nervousness, I joined the group now getting in line under the direction of Singapore's Lion City Spartan group's leader, nicknamed Shrek. The people doing their burpees in the other corner were being penalised for not bringing the items on the list.

Damn, we haven't even started and burpees were being dished out. I was just thankful the whole platoon didn't have to do it alongside them. Because after us, more and more people poured in almost late and lacking even their hydration pack. It was then we learnt what Hurricane Heat was truly going to be about.

"If your fellow Heaters don't have water, you share it! If they want to give up, you encourage them to stay on! If they fall back, you fall back with them! Leave no one behind!" our Spartan Krypteia shouted.

Leave no one behind. Familiar words. I can do that since that has been practically drilled into me since joining bootcamp.

The first order of the day was to memorise the Warrior Ethos. At 4:45am, these four sentences proved to be hardest things to be remember.

I will always place the mission first
I will never accept defeat
I will never quit
I will never leave a fallen comrade.
Thankfully we had amongst us, Kirsty o Donnell, an 18x Trifecta holder who led everyone through the Warrior Ethos. She also stepped up as one of the team ICs when we were divided into four teams.

Hurricane Heat kicked off with us climbing over the obstacle and bearcrawling to the next. Teams took turns then going into the pool of muddy water, going under the overhead wall and merging from the other side. Less than 30 minutes into the event, everyone was soaked from head-to-toe.

Stationary burpees, squats and flutter kicks next to the pool had us all sprawled and down in the hard rocky ground. And it was into the pool again! With the haze thick in the air, the pool was refreshing break.

At random times, the Krypteia would command each team to recite their assigned line from the Warrior Ethos.

As a team, we had to get five buckets of water from the pool and pass the barbwire crawl obstacle. We took turns and it was awesome when complete strangers kept asking me if I wanted to switch out or if I needed a break. Everyone stepped up quite selflessly, embodying the Warrior Ethos well.

We sat in pools of still water, in mud and slippery algae and did flutter kicks and burpees where we stood. Logs were lifted in groups of three and as a team, we did squats in unison. The buckets stayed with us the whole way and we found a use for them as the event progressed. We had to side shuffle from rock pile to buckets with nothing but our bare hands to collect the stones and pebbles to fill up the buckets.

And when we were done, well, we weren't done until the other team was done. So we all chipped in to help out. In no time at all, we were done and were promptly told to empty out the buckets.

As a team, we ran to the ring obstacle and pushed out 30 burpees together. Each team then had one teammate come forward to tackle the obstacle. While each team had a go, we laid in the grass and stones and did more flutter kicks. When our Spartan Krypteia told us to roll over, we did. He said get back on our backs, we did.

Then it was our turn at the ring obstacle. Our rep was so close to reaching the end when he slipped. The penalty was a tad harder circuit. Instead of four, we had to carry six "casualties" back to the pond. That meant fireman carrying or just carrying the lightest members in the team who are not allowed to walk or move on their own.

That meant when we came back to the barbwire, we had to roll them across the obstacle and in no time, we had them across the pond as a team. But of course we weren't done yet. We had to climb over the slated slope obstacle that we had first encountered when we started. Once all the teams had passed, we were instructed to lay on our back, facing the Finishing arch.

Once again, we recited it, now ingrained in our memories. We could sense that the end was near but it wasn't over yet. In true Spartan style, we pushed out 30 burpees as a unit.

Our Spartan Krypteia then sat us down for a group photo of the HH-001, first class of Hurricane Heat Asia before telling us the very good news.

"You guys are the first in Asia to receive the Hurricane Heat wedge as part of the Spartan Trifecta Delta."

I won't deny it. That felt...special. It felt...exclusive. We were the first class in Asia to undergo the Hurricane Heat. Granted, it wasn't as long or as daunting as the 4 or 8 hours Hurricane Heats but to us, it felt like we could take on an Ultra Beast as a team and survive.

We got our HH dog tags with the Warrior Ethos embedded into it, our finisher t-shirt and the Delta wedge. The walk back to the car to change for the Spartan Race was especially cool with race participants pouring in and giving us looks of confusion at our muddy dirtied state and admiration when they realised that we had just completed the Hurricane Heat.
Utter madness but hey, it takes madness and teamwork to pull through an event like Hurricane Heat and in the case of many of us, throw in a Spartan Super into the mix, post-HH.

Ps: No pictures as my camera malfunctioned and wouldn't turn on. Besides, I suspected the Krypteia will dish out burpees as punishment if I stopped to take pictures.
Posted by Tania at 2:18 PM

Cool beans! What an inspiration 😱

If the furniture, decoration, color schemes, arrangement of the things are not in sync then it will fail to achieve the desired result. phoenix pizza restaurant