Who would have thought queues would be the main obstacle at Viper Arena 2016? Why would we especially since Viper Arena did such a great job last year? After last year's Arena, I decided it was my favourite obstacle race of all, due to the night factor and the shorter distance. Oh, and no mud. 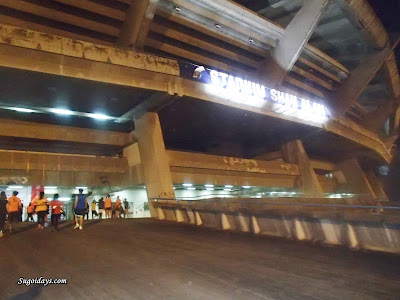 After we had parked, my friends and I were greeted by the sight of a snaking long queue at the registration counter. It was only 6pm and already participants were arriving well ahead of time. Little did we know that it was a preview trailer to the rest of the race. 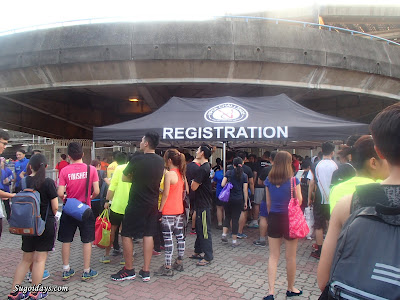 Because we were early, we had time to spare and after check-in and getting our wrist bands indicating our time slots, we loitered around the race village where there was an abundance of food, beverages and things to do. 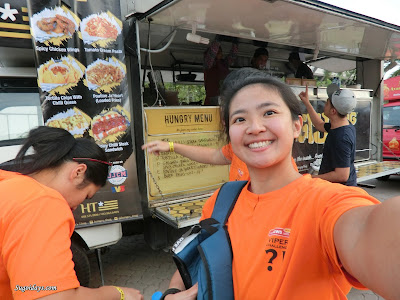 With time to kill, we were soon munching on a plate of nachos and hot dogs. One of our friends who had just completed the elite wave joined us and shared his thoughts on the course in exchange for a few nibbles of our food. 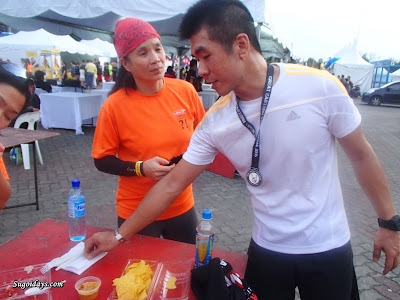 We were quickly joined by the rest of Team Huhs, all decked out in orange shirts sponsored by MyNews.com. Thank you, MyNews.com.

Bag drop was blissfully fast and coordinated (unlike the horror that was the Spartan Race Super's bag drop just the week before). But due to the overwhelming number of racers for this event, we found ourselves queuing for the start line. If it wasn't for the awesome music and the flashy lighting works, there would have been a lot of restless people. As it were, it came off more like a rave party. 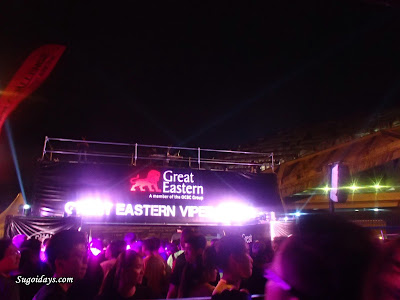 When we finally flagged off, it was with great relief to be out in the open area of Stadium Shah Alam. But it wasn't before long before we encountered our first obstacle and the first of many queues to come. 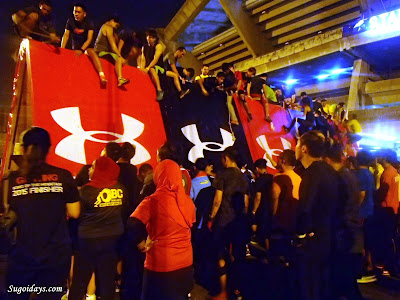 Which was fine. Because it gave us time to chit chat, help each other and other people and wait for the whole team before moving on. Some obstacles were fast with ample units to go around like the hoist, sled push and the sandbag drag while others like the wall climb, ring walks and the traverse rope built up a queue because everybody want to have a go. 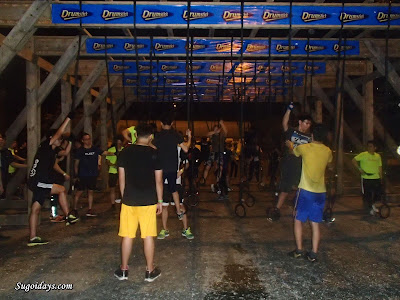 Viper Arena's main attraction, the Eliminator apparently drew a queue lasting 30 mins to an hour. Mind you though the middle section of this obstacle was closed off as the netting couldn't take the weight of so many participants crossing at once. I wouldn't know though, I only attempted the last part of it before walking pass. 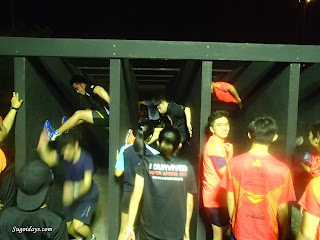 For the first time ever, I passed the traverse rope without incurring a cramp. Sadly, the same can't be said for many of the participants around me and it took a lot of yelling from the Grand Marshal, Hashida Lee to coax them off the inflatable bed. 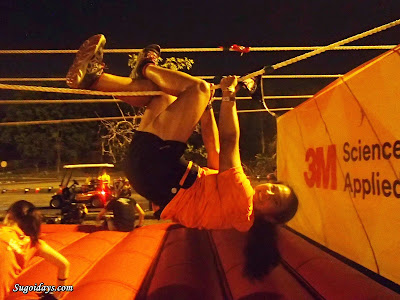 The sled push was easily one of my favourite obstacles. Putting on the puzzle of  a vest to do the sled was not. I vaguely remember flying through that obstacle with the sounds of a certain British Marshal barking orders in the distance. Hats off to Raj for manning this "challenging" station. 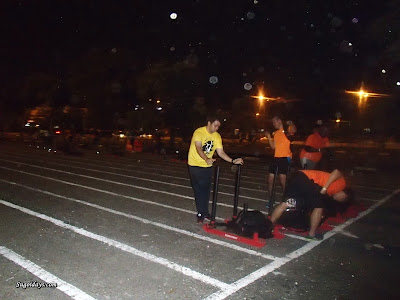 The one obstacle that bested me was the ascending and descending monkey bars which were freaking high in the middle. My fear of heights and falling kicked in and it took me forever to make the transition to the descending bars. I made it eventually but by then my grip was gone. If you were at the monkey bars and saw (or heard) a girl in orange yelling at her friend named Alex to hold her before she let go, chances are...that was me. 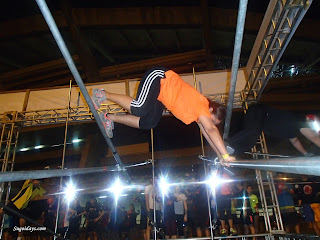 If it weren't for the queues and massive quantities of participants running the course, I heard from the elite runners that the obstacles were really up to par. They were designed for people to help each other and even some of the elites had to rely on each other for help. The motto "Leave no one behind" should not exclude even the fitter guys. If you wanted to blitz the course solo, then perhaps Spartan Race is better suited for you. 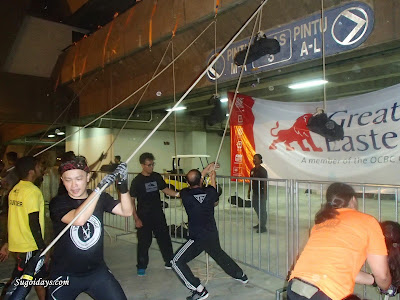 What really stood out to me at this event were the participants and the volunteers. People were more willing to lend a hand and help out each other at the obstacles compared when Viper Challenge first kicked off. And most of the volunteers were always so helpful and encouraging, the marshals ever present and commanding to ensure everyone's safety. 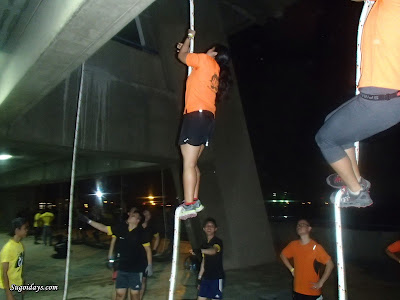 In just slightly over 2 hours, we were done. At the finish line, we collected our medals, well-wishes from the cheery volunteers and finisher shirt. Collecting our bags was fast and organised and we chilled out while simply enjoying the clubbing-like atmosphere of the midnight wave flag offs. 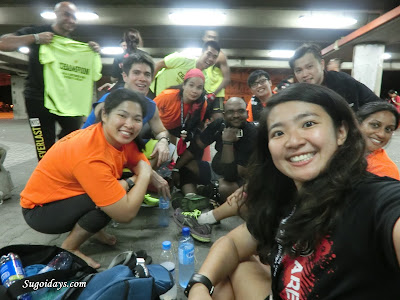 I was sorely tempted to get in another round of Viper Arena just for fun but then my tummy growled otherwise. Because it was well past our dinner time and we, hungry Malaysians need our food pronto. 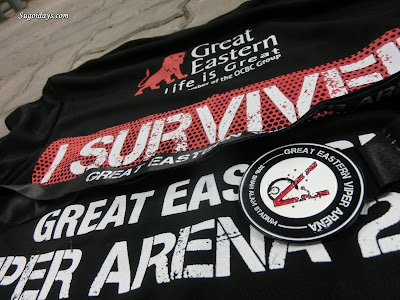 Fortunately there was a well-known mamak in Seapark PJ that deserved up a piping hot plate of nasi lemak in the wee hours of the morning which all of us had. Because after 7+km and 13+ obstacles, we earned it.

Read about the first Viper Arena in 2015 here

*This post is based solely on the writer's own experience and opinions. Her entry fee for Viper Arena 2016 was paid for with her own hard earn money. Camera used to capture the photos was my four year old Olympus Tough but its performance is really laggy now. Perhaps it's time to retire it. Team shirts were sponsored by myNews.com.
Posted by Tania at 8:25 AM