Getting an International Driving Permit for Malaysians

It's almost a global knowledge that Malaysian drivers are notorious on the roads. Hence why our driving licenses aren't recognized internationally except in some countries. So in order to rent a car in certain countries, we are required to obtain an international driving permit (IDP) beforehand. 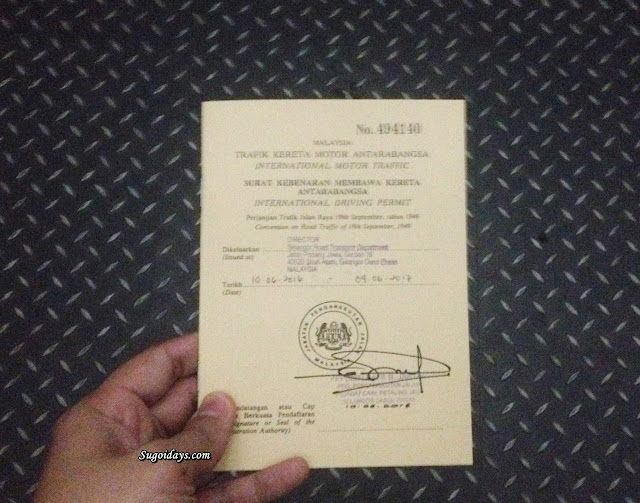 Japan is one such a country and for my trip to Hokkaido, I was the assigned driver and had to get my IDP sorted out before the trip. Initially I was informed that I could get my IDP done at the Automobile Association of Malaysia (AAM) and also at the Road Transport Department (JPJ) office but a quick call and internet search told me that AAM had ran out of IDP until further notice.

So it was off to the closest JPJ office to my house. To get it done, I needed to prepare:
1. Photocopy of my IC and driving license
2. RM150
3. 1 passport-sized photo

The office opens at 745am, I rolled up at 8am first to get my passport-sized photo taken. The Petaling Jaya office has a guy armed with a digital camera, a white backdrop and a portable digital printer to do the picture for you at a cost of RM15 for six piece. I got my photo taken and collected my number from the counter.

The lady at the counter neglected to give me the form even after I told her I was there to apply for IDP. I had assumed I was to get it from the officer. Make sure to ask the numbering counter for the form needed as well. When it was my turn, the officer informed me to first fill in the form, available at the counter. Well, that was 15 minutes wasted as I quickly filled in the form and went back to the guy.

He was very friendly though and promptly processed my application. We chatted about countries that needed IDP and he mentioned I looked Japanese but was surprised to learn that I was Sarawak-born. We then chatted about Sarawak and Sabah. Really nice fellow.

Anyway, in 15 minutes, my IDP was completed and despite what I read online, I did not need to surrender my existing driving license.

And that's that. In 15-30 minutes I was certified to drive in Japan and anywhere in the world (within the rules of the Geneva Convention road agreement or something similar la). The IDP was valid for a full year from the date of issue so my advice would be to get it a week before departure just to be safe.