Except achieving one of my dream of spending my birthday in Japan. Like any true Japan-fan, a birthday getaway to the Land of the Rising Sun was the goal and on my 30th birthday, I was in Japan at the top of Mouth Fuji. 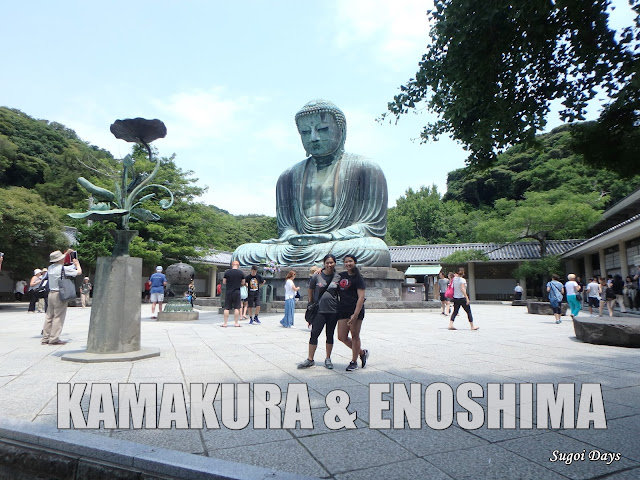 But I am getting ahead of myself. Let me start with the first town we visited upon arrival in Japan during our trip on 1-9 July (summer season). Kamakura was beautiful, peaceful even except on weekends when it's becomes the ideal beach getaway destination for visitors from Tokyo. I booked our two night stay at Webase Hostel Kamakura, near Yuigahama beach and two train stops away from Kamakura station.


Even though Kamakura and the neighbourhood island of Enoshima can be explored in a day, I had opted for two night stays as I didn't want to rush. What a good choice it was as it was indeed the most relaxing part of my trip. 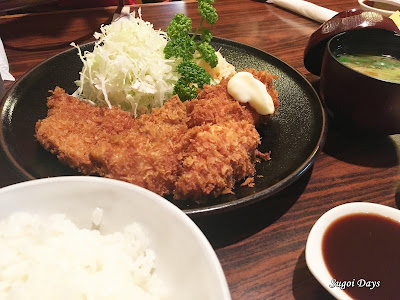 We dropped off our luggage at the hostel and headed back out to Kamakura station for lunch and to walk around. We chanced upon a small restaurant selling tonkatsu and tempura rice near the Kamakura station entrance to Komachi street. I don't know the name as it was in Japanese but the food was scrumptious and befitting of our first proper meal in Japan. 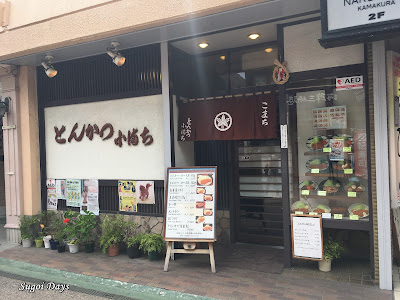 On weekend, the main street was crowded with heaps of stuffs to look at from snacks to food to desserts and Japanese trinkets and souvenirs. We spent about an hour or two just exploring the street which led up to Tsurugaoka Hachimangu. 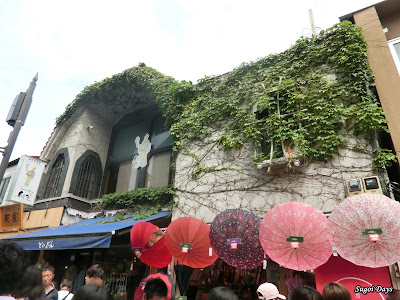 The massive temple on top of a flight of stairs was crowded in the afternoon. We went back to Tsurugaoka Hachimangu the following morning at 8am while on a run around Kamakura and what a vast difference it was. Without hordes of tourists, the temple was so serene. 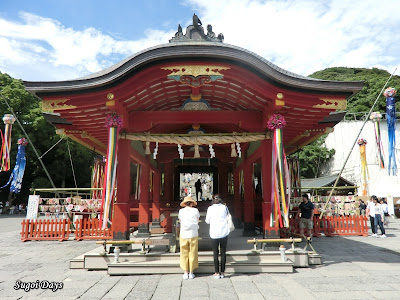 In summer, the sun rose at 5am and by 7am, it was blazing hot as we discovered during our run up and down Yuigahama beach on our second day there. We then detoured through Kamakura and ended at the beautiful Onarimachi Starbucks. 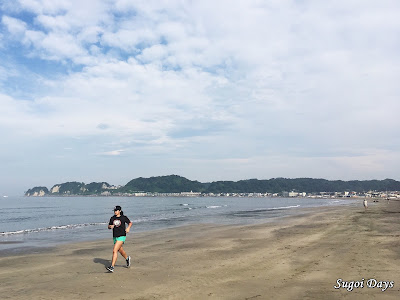 What makes this Starbucks so unique was that it was located in the former studio and residence of cartoonist, manga-ist and artist, Ryuichi Yokoyama. Even if you don't know who that is, the structure of the cafe itself alone was worth a visit as it features a beautiful swimming pool where in spring would be covered in pink petals.

At 10am, we headed to the famous giant Buddha statue, Kamakura Daibutsu, a 15 minutes walk from my hostel and arrived just ahead of the massive group of tourists. Price at 200yen, it was worth dropping by to have a look, snap photos and that was it. I wouldn't recommend going into the Buddha itself as it was dark and stuffy inside with a narrow stairway for one person. 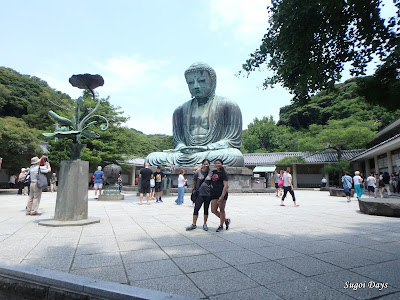 Hasedera was our next destination and a short walk away from Buddha, costing only 300yen. When I was there, Hydrangea flowers were blossoming along the slopes after Kannon Museum. Nice to see, nice to photograph, tiring to walk up to. You can get a nice view of Kamakura from the slopes. 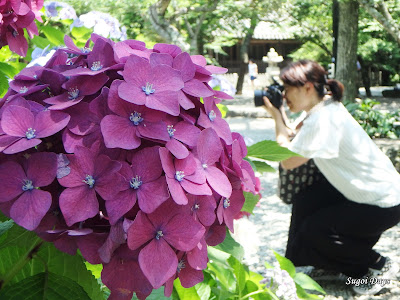 Hasedera was a quick walk away from the Hasedera station which led to Kamakura station one way and Enoshima the other way. After a 20 minutes train ride and a 20 minutes walk from the station to the island using the pedestrian bridge, we were on Enoshima and on the hunt for the famous shirasu (white bait fish) don. 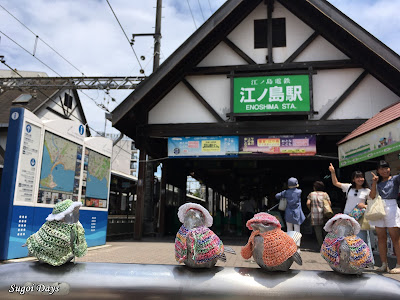 We ended up settling for a three-floored restaurant near the parking lot with a nice view of the mainland town, taking an hour recuperating our energy over a late lunch. 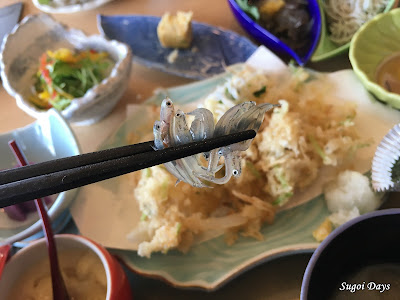 After that, it was on to exploring the island. The Enoshima 1 Day pass costed 1,000yen and allowed us access to three of its main attractions and use of the elevators heading up the island hills. The three attractions were the Iwaya Caves, Samuel Cocking Garden and the Lighthouse Observatory Set called the Sea Candle. Take my advice for it and just purchase the pass instead of the individual tickets because the elevators can save you ample time and energy heading to the different attractions. 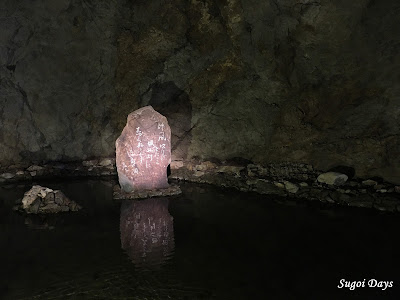 After looking over the map of the island, I decided to head to the Iwaya caves first seeing as that was on the far end of the island. There was a lot of stairs heading to the caves and I really do not recommend going there if you have leg problems, health issues or disabled. On top of that, the caves themselves are narrow and slippery due to the moisture. 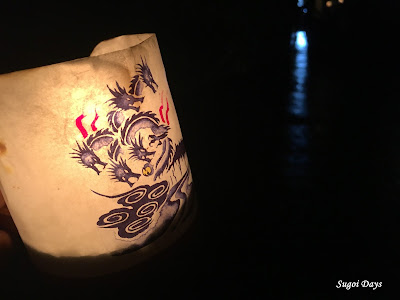 The Iwaya caves are along the southern coast cliffs of the island. The first cave contains some Buddhist statues, while the second cave is dedicated to the legendary dragon that used to terrorize the area. Along with the walkways between the two island along the coast, at a rising tide, you can almost make out a turtle-like rock formation called Kameishi, making it look like it was headed out to sea to the palace of the Dragon God.

After the caves, we headed back toward the summit of the island and the observation deck, coming back the way we came. It was a long walk up the stairs we had descended earlier to return to the Sea Candle. 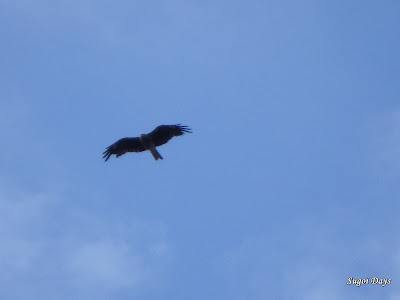 The Sea Candle was a 60 meter tall observation tower that was also a lighthouse that was built on the former residence of Samuel Cocking, a British trader who purchased a considerable part of Enoshima in the late 19th century and built a botanical garden there. Samuel Cocking Garden has a cafe overlooking the coast but that was quite popular and crowded so we adjourned to the cafe at the foot of the observation deck to rest and wait for the sunset. 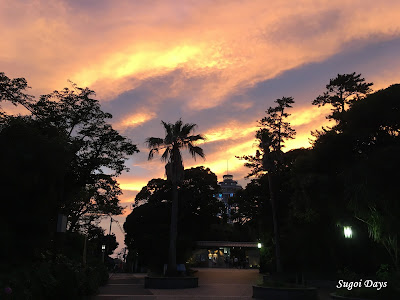 We were there half an hour to sunset but already tourists had parked themselves at the windows to capture the cloudy sunset. I could barely make out the silhouette of Mount Fuji in the distance but still it was glorious to behold. 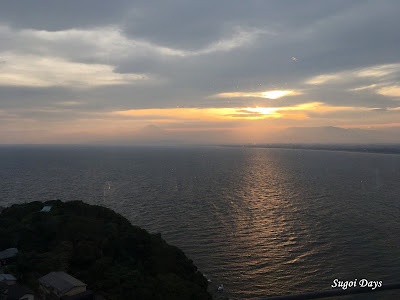 It was back to the hostel for us after that with dinner and dessert from Family Mart. Two nights in Kamakura was barely enough for us to explore the area at that leisurely pace but for then, it was enough. The following day, we were headed for Tokyo, my third visit there and my family's first.
Posted by Tania at 2:32 PM