You know that famous saying about Mount Fuji...something something, only a fool would climb it twice? Well, say hello to aforementioned fool *waves* 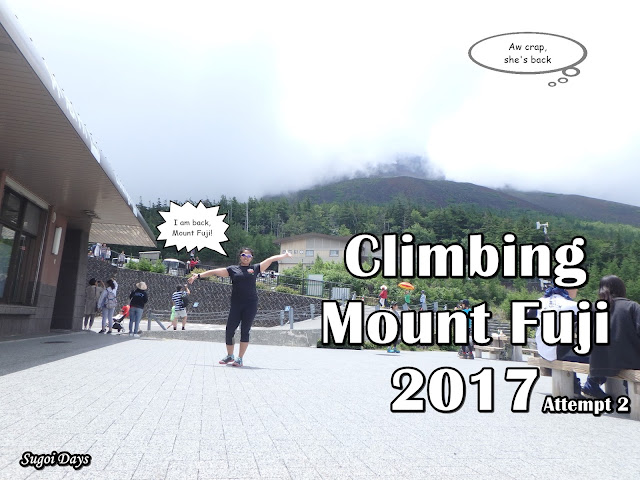 On my 30th birthday, I summitted Mount Fuji for the second time in my short life on earth. The first time I DIY-ed the entire trip. But having dealt with the hassle of it, I wanted a stress free adventure on my second time and so and this time, I did it with the Willer Express Mount Fuji Tour. This meant everything from the bus to the accommodation to the timing of the climb was managed and overseen by the experienced guide and mountain guides under the Willer Express group.

Just in case some of you were wondering, Mount Fuji's hiking season starts in early July to mid-September. I was there on 7 - 8 July 2017 and could still see snow patches on the mountain. To read about my DIY trip in 1-2 Sept 2015, go to these links: Part 1 and Part 2. 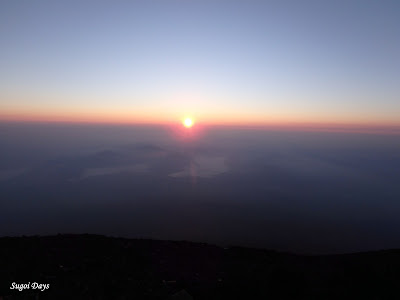 My experience with the Willer Express Tour to Mount Fuji kicked off from the Shinjuku Center Building, a 10 - 15 mins walk from Shinjuku station. It was basically right next to the iconic cocoon building in Tokyo aka Mode Gakuen Cocoon Tower. The entire tour gathered here, a colourful group consisting of Americans, Thais, Malaysians (us), Indonesians, Australians and Canadians of all shapes, fitness levels and attitudes.

We were supposed to depart at 7:30am but ended up leaving close to 8am due to the Thai guests arriving late. *Glares* During the bus ride, we were introduced to our two English-speaking mountain guides, Yas and Yama who ran through the climbing plan with us. We were also given coupons to use at the shops and restaurants at the 5th station. 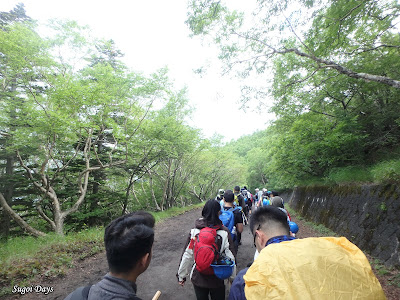 The bus make a quick 20 minutes pit stop at a rest stop for us to do our business and dispose of our rubbish as there were no rubbish bins on Mount Fuji. The bus ride to the start point of the hike aka 5th station took about 2 hours and a half and we had just enough time to grab a meal, buy our walking sticks and do some last minute supply shopping. I even almost lost my phone before the hike but recovered it before we started but that is a story for another time. 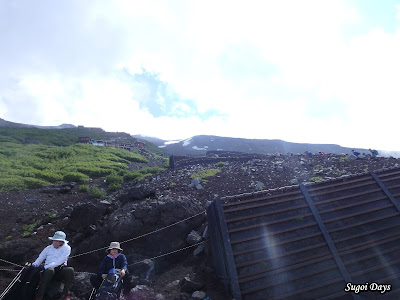 The guide made us do warm-ups and then we were off! Much like before, the beginning of the hike up Mount Fuji was pretty anti-climatic. After 20 minutes of silent marching, we passed the 6th station when Yama called the first break. Many went to the toilet here as it would be a long while before we reached the 7th station.

So rest we did but I certainly did not expect us to rest as long as we did. It was a generous 30 minutes break and we were just getting started. I was starting to wonder if join a tour was such a good idea after all. The long break caused my body to cool down and by the time we got a move on, I had to force myself into motion. 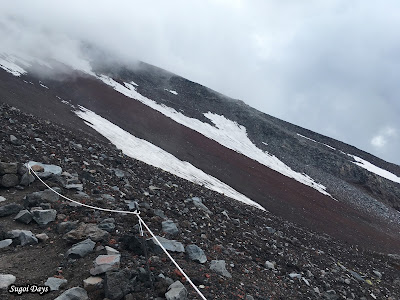 It was quickly evident that a guided hike wasn't for everyone, myself included. We took frequent breaks and most of the fit ones, myself excluded just wanted to keep going, overtaking the other hikers to get to our mountain hut as soon as possible. The constant stopping and going pace gave me a headache due to exposure to the sun on our faces, the chill whenever we slowed down and also the altitude. I wasn't the only one feeling it. My whole family had headaches and we really wanted to get to our mountain hut on the 8th station as soon as possible to rest and sleep. 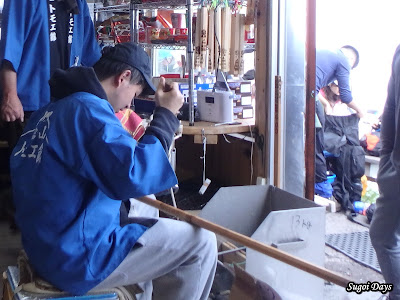 However it was Yama's policy that we stayed between him and Yas and the slower members of the group stayed right behind him. After all, you're only as fast as your slowest member. It took us 6 hours plus to get to our hut, Tomoekan 8th station. 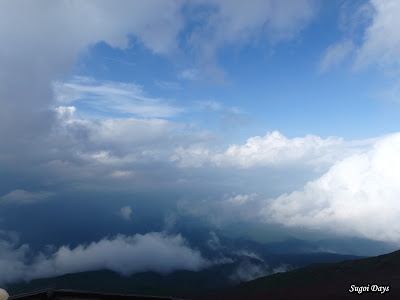 As soon as the whole group arrived, the hut staff showed us to our allocated slots. No, you do not get to pick which rooms you get. It was first come first room and depends also on how many people are under your booking. My family got a top loft bunk in a room with 20 other people. It was a blessing in disguise because the loft was spacious and quieter compared to the lower bunks. 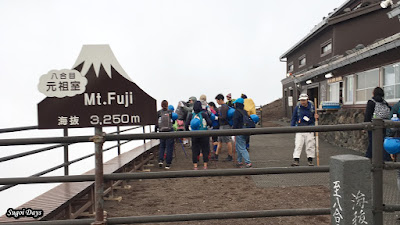 The only downside was having to climb up and down to head downstairs for meals and to go to the toilet which was located outside and about 15 meters from the main hut. I was instantly reminded how Laban Rata was a resort compared to the spartan-like conditions on Fuji's huts. My sister and mother who thought I was exaggerating initially about Fuji now agreed with me. Needless to say, a lot of forward planning went into relieving ourselves at night and in the morning.

Dinner was served around 7pm but before that, we slipped outside to catch a glimpse of the twilight view and what a beautiful sight it was. Dinner was a serving of hamburger, non-spicy curry and rice with green tea. 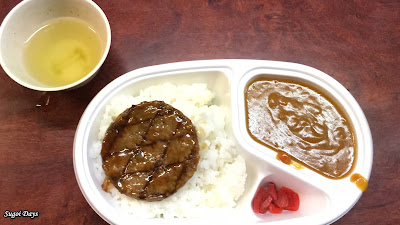 During the meal, Yas briefed us on the summit climb and informed us that we could rent extra jackets and coats from the hut. We were to leave our belongings behind and brought only what was needed as we would be returning to the hut for breakfast. 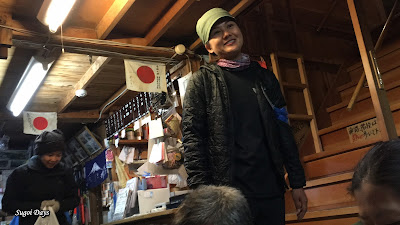 Call time to resume the hike was at 2am and we gathered outside the hut to start the last push for the summit. Already we could see the traffic of headlamps ahead of us. My headache still persisted but oddly enough the chilly temps helped keep it at bay during the climb. Learning from my past experiences, I wore three layers of pants and five layers of shirts and jackets and found myself to be perfectly snug and warm at the summit. 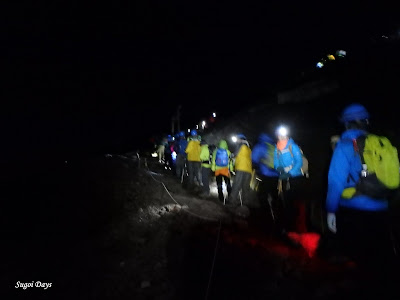 There I feast my sights on the view that was denied me two years ago when the typhoon sent rain and winds on my group. The sunrise was spectacular and well worth under going this entire climb for the second time. Call me a fool but this fool just spent her 30th birthday at the top of Japan's highest mountain and was living out the dream of being in Japan. According to Yas, this was only the second time the sunrise had been so clear since climbing season started a week ago.

After basking in the glow of the sun, Yas took us to the volcanic crater. Just think if Mount Fuji were to erupt there and then, we would have been instant casualties. Much like Mount Kinabalu, we are truly at the mercy of nature.

About 6am, Yas led the descent back to the hut. As the descending route has yet to be open by the Shizuoka prefecture, we went back the way we came which was...troublesome as there were still people ascending and the path was very rocky and narrow. It took us half the time to reach the hut once more and we dug into the breakfast of mackerel and rice prepared by Tomoekan. 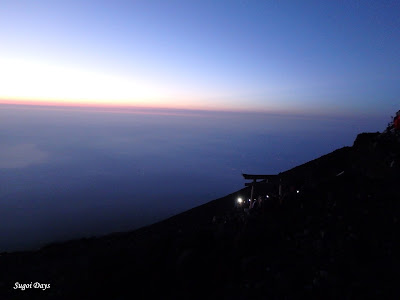 Our descend back to the 5th station began at 8am and we found our way to the zig-zag route heading down. Our guides were reluctant but after much begging and asking, they allowed to the group to take off. Yama too blitz the downhill as we later learnt he had to guide another group that same afternoon. 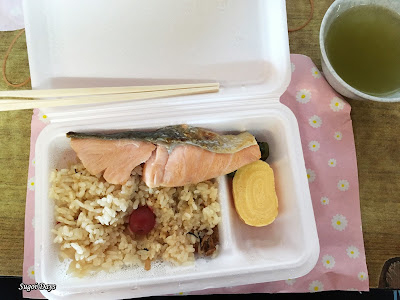 Much like before, I hated the downhill for its mind numbing boredom and never ending zigzags. I tried running but nearly faceplanted in red clay for my efforts. Half the group had already ran off and how they moved so fast was beyond me. Nevertheless, I powered on and by 1030am, arrived at the 5th station. My family followed soon after and while waiting for the rest of the group, we changed into a fresh set of clothes and wandered about, looking for food and souvenirs. 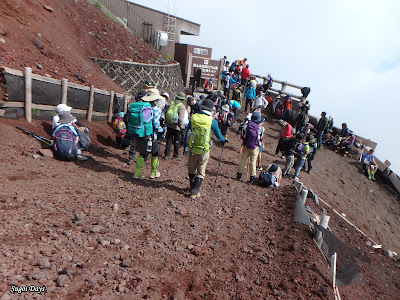 Our tour with Willer Express Tour did not end there. We were then taken to an Onsen resort where at 800 yen, you could enjoy a hot bath in a beautiful onsen. Of course, I wouldn't know because thanks to my tattoos, I wasn't permitted to go in. However, I did enjoy the gyoza they were selling there. The cafe was run and managed by senior citizens and was quite unusual to observe.

By the time we arrived in Tokyo, it was about 5pm and we were close to dead on our feet. At that point, I wished I had booked us into a hotel nearer to Shinjuku but what a sight we were with our walking sticks, marked and chopped with our efforts. 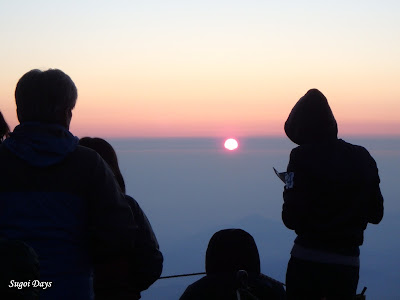 I'll be writing a post on DIY-ing the hike versus joining a proper tour so that you can decide which is better for you. Just remember that official hiking season is July to mid-September and that reservations for huts usually open two months prior.
Posted by Tania at 6:22 AM

nice! loved to go there one day

i understand what do you mean .. i also do not like longer breaks or stops during hiking, because we are already warmed up then we stop and body cool down. takes time to warm up again.tiring!~

Yes! Especially when you're on a cold mountain like fuji!