24 Hours on Mount Fuji in a Typhoon Part 2

As soon we arrived at Goraikoukan, we were given two big plastic bags for our wet backpacks and shoes. We were shown to our allocated sleeping space in a tight room filled with four rows of bunk beds that fitted about 25 people per row per bunk. You do the maths. Needless to say it was quite a tight squeeze.

Our backpacks and shoes were hung above the foot of our sleeping space and I opted to quickly change out of my drenched clothes into my dry spares which thankfully escaped the rain. There weren't any showers though and the toilets were outside, about a 25 meter dash from the main entrance in the freezing cold. 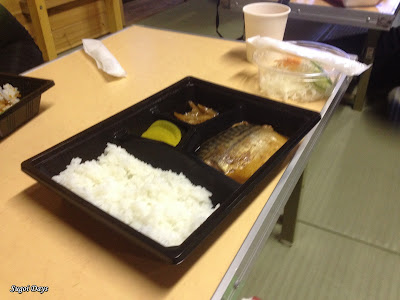 Dinner was served at 6pm and being a few of those already waiting by then, we got our meals of mackerel with rice first. At this point, one of my friends had developed mountain sickness and had gone to bed in hopes of sleeping it off. The Goraikoukan staff were kind enough to pack up his meal, note down his name and return it to the kitchen in case he wanted to eat it later. As for myself and my other friend, we literally gobbled up dinner in under 15 minutes. Even after that meal, we ordered a ramen just to slurp on the hot soup. 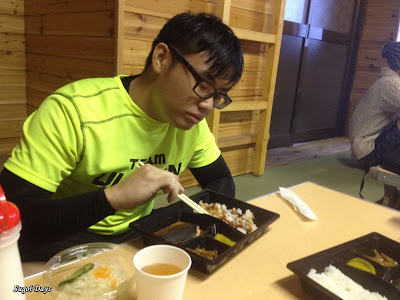 Outside, the rain and wind grew heavier and stronger as more and more people arrived at the hut. We retreated to bed about 7pm in hopes of getting a good night's sleep. It was freezing even under the covers and we huddled close for body warmth. Thanks to the poor sleep I got previous night, I fell asleep surprisingly fast, waking up only to use the toilet which was a mental challenge on its own as it required venturing out into the freezing cold. My trips to the loo were spare and far apart. 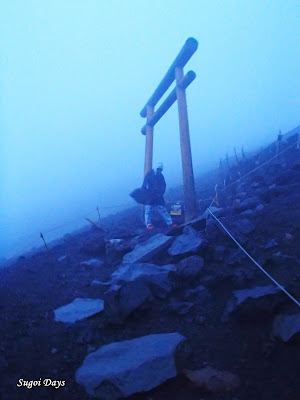 At 3am, people started getting ready to ascend the summit but the continuous rain and wind only made my group snuggle deeper into the thin beds. Only at 4am did we decide to roll our sleepy asses out of bed, grab breakfast and we headed back out into the cold at 5am. Albeit reluctantly I might add. 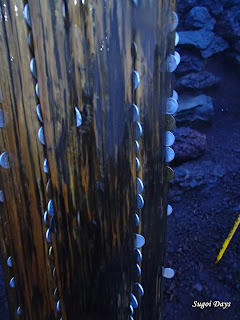 Sunrise was the furthest thing from our minds now. I highly doubted anyone got a glimpse of the sun due to the relentless rain and the fog that cloaked the summit. We reached the summit an hour later and found a ghost town-like atmosphere with no one out and about. The rain was much stronger then and instead of celebrating the fact that we were at the summit of Japan's highest mountain, we retreated to one of the huts there to escape its brutal weather. 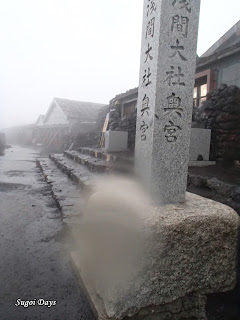 An hour was spent there, sipping on hot coffee, instant ramen and miso soup to warm our freezing soaked bodies up. I have never been that cold in my entire life. Our only source of warm, other than our drinks and food, was from small fire spots in the huts. A pair of hikers from Hong Kong arrived later and we chatted with them for a while. 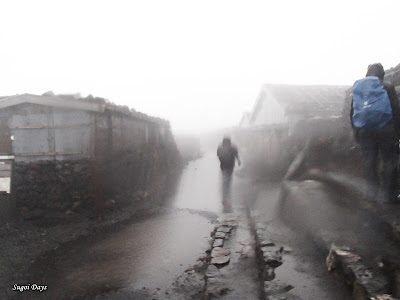 If it was anymore possible, the winds and rain grew stronger when we wanted to leave. But we knew we had to get off the mountain to catch our bus back to Tokyo so we pressed on and down we went. I've read many accounts saying that the downhill was worst than the uphill. I can now relate. 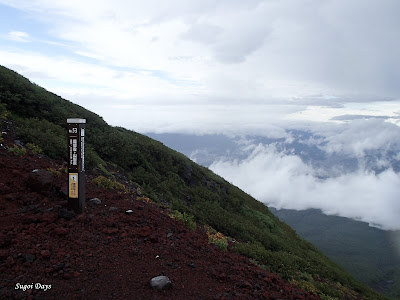 The downhill was brutal on the knees and thighs as the ground was loose and turning an ankle was easy if one was not careful. My hiking stick, now decorated with station stamps was a great help on the descend. It was a long three hours hike down but towards the end, the rain lessened and we finally got a view that wasn't just fog and mist.

Toilets were almost nonexistent on the way down as it was only available at the 7th station and the 6th station, a good two hours into the descend so it was best to use the loo at the summit. After two and a half hours of monotonous downhill, we were finally back at the 6th station where the road joined back with the ascending road and it was the home stretch to civilization! 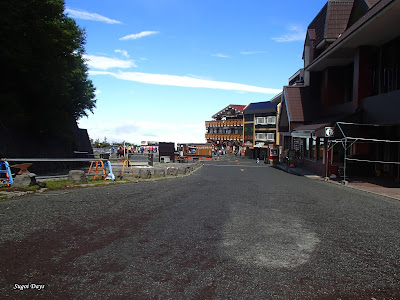 The sight of the 5th station almost made me weep for joy and I ran to the toilet to change out of my wet clothes. It instantly made me feel miles better. 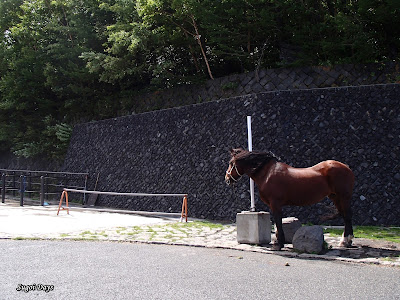 Once we had tuckered down a hearty lunch at one of the restaurants, we spent the remaining time shopping for souvenirs before we eventually caught the 12pm bus back to Shinjuku. 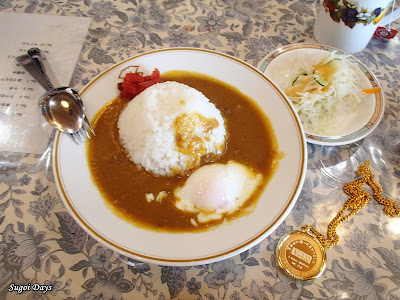 As we rode away from Mount Fuji, I caught a glimpse of it once more as we passed Fuji-Q Highland, a theme park. The peak was clearly visible and it was surreal to think we were just up there five hours ago, battling sub-zero temperatures, rain and wind. I later found out that the sunrise the following morning was stunning. 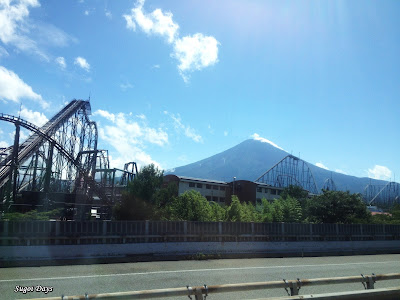 I said I won't start my post with that famous Mount Fuji quote but I'll end it with 'A wise person climbs Mt. Fuji once, only a fool would climb it twice....unless they didn't get to see the damn famous sunrise then they should climb it again!'

Tips and the How-to's of Mount Fuji coming soon!