With a car, the skies is the limited when it comes to exploring Kyushu. After a red eye flight into Fukuoka, I quickly bundled my family into our rented car and was cruising along the highway to our first stop of the trip - Dazaifu Tenmengu Shrine. 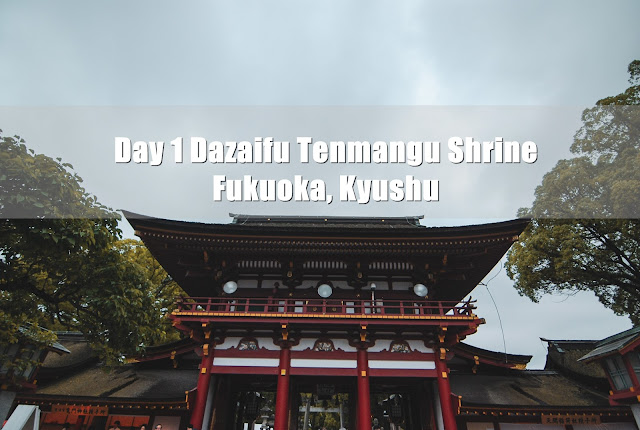 There was ample parking in the vicinity but can be hard to find even with Waze and the GPS. Our GPS took us down a tiny path that our car could barely pass through. But in the end, I parked at a lot that was JYP 500 per entry and just a short walk away to the bus station. Amazingly, the parking lot operated on a honour system and I only had to drop the payment into the unguarded metal box provided. Japan was amazing. 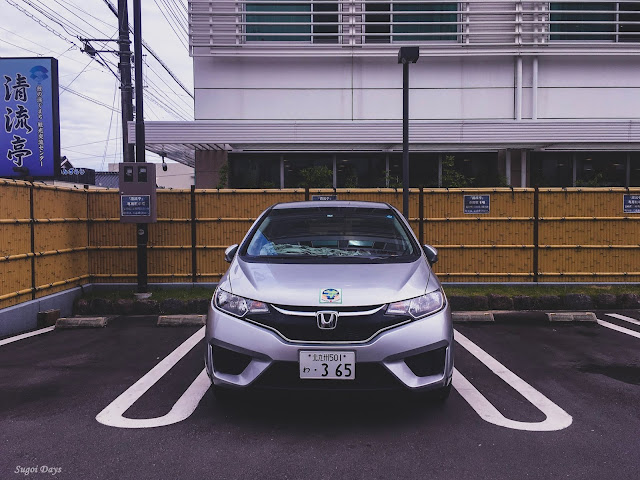 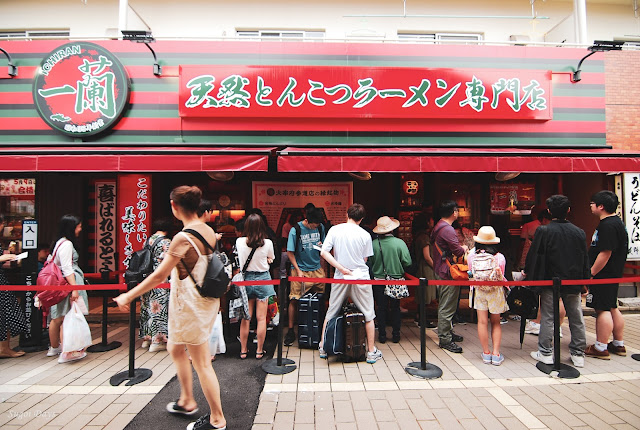 Dazaifu Tenmangu Shrine was our main destination but as we were famished, we quickly joined the queue of tourist for none other than my favourite ramen joint, Ichiran Ramen for an early lunch. This outlet was particularly special as it serves its ramen in a pentagon bowl that symbolises good luck for students. For me, it was a tick off a personal mission to eat at three outlets across Fukuoka that was unique in their own way. The bowl at best was one of the prettiest ramen bowls I have ever seen but sadly these are unable for purchase. 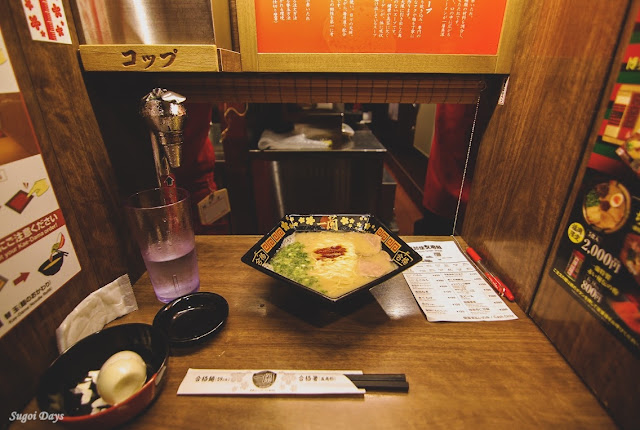 With our tummies full, I led the way through Dazaifu Tenmangu Ometosando to the shrine. It being a Sunday meant the shopping street leading to the shrine was bustling with locals and tour groups. Because I was so stuffed from lunch, I had to give the area's delicacies, Amaou Strawberries and Umegai Mochi a miss as we tugged our way uphill. The famous Starbucks by Kengo Kuma was spotted on the way up but judging by the crowd inside, we opted to come back after the shrine visit. 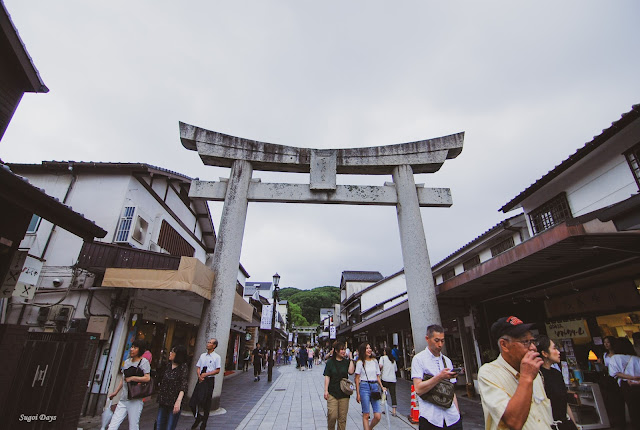 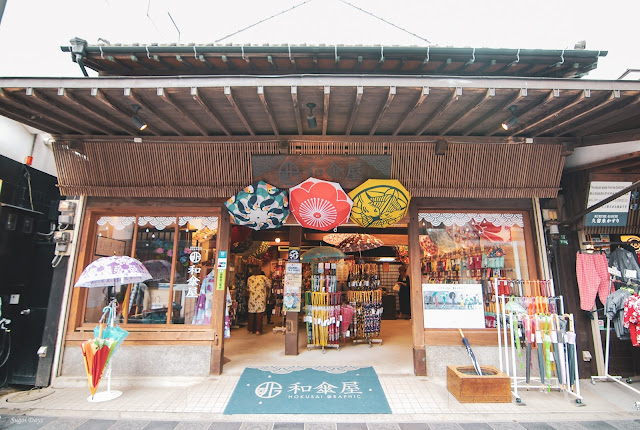 Location of this Starbucks was unique as was its design, as it stands on the main approach to the Dazaifu Tenmangu, one of the most major shrines in Japan. Established in 919 A.D., the shrine has been worshiped as “the God for Examination,” and receives about 2 million visitors a year who wish their success. Also hence why the Ichiran bowl here too was in the shape of a omamori amulet. 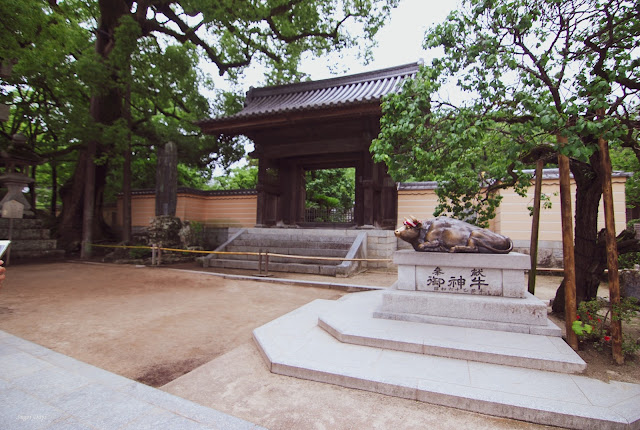 As we approached the tourist center before the shrine, we noticed a queue. It wasn't a queue for bubble tea but rather a line of people wanting to take photo with or of a statue of a cow. Given its presence at a shrine, you would say it was a....holy cow. It was believed that one can become smarter and expand your knowledge by patting the statue on its head. 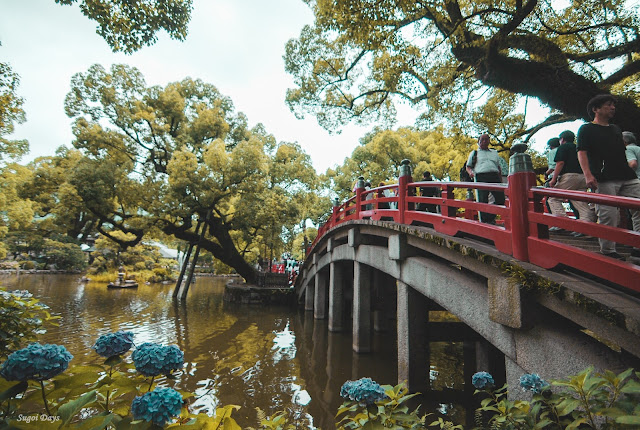 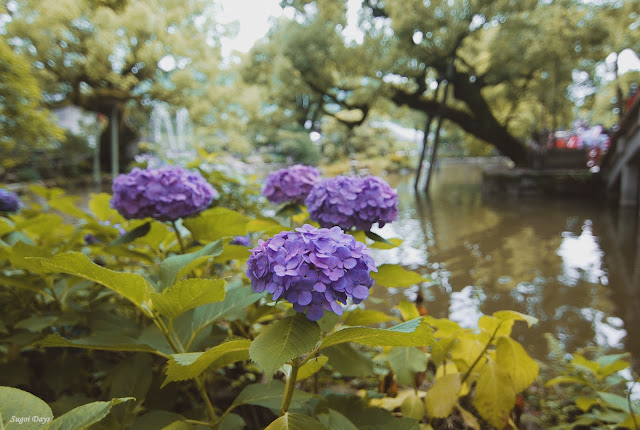 After the cow statue, we had to cross over three bridges that ran over Shinjiike or rather Lake Shinji. The bridges supposedly represented the past, present and future and that passing the bridges would make your body and soul more pure for meeting the deity of the shrine. After this point, the red gates of the shrine beckoned us and beyond it...a long queue to the main hall of the shrine also known as honden. 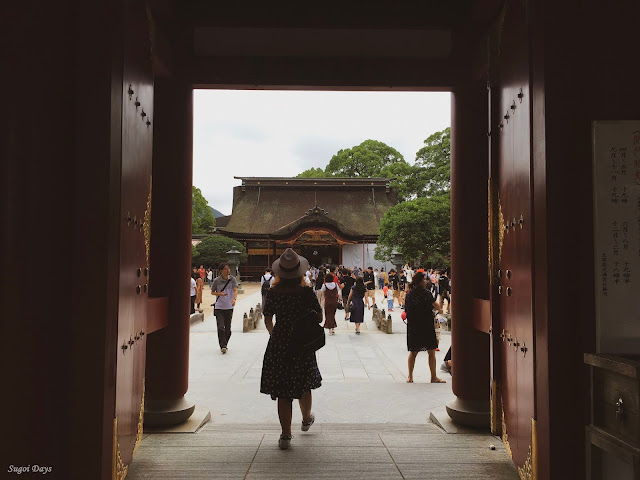 The hall of Dazaifu Tenmangu shrine was first constructed in 919 and like many shrines and castles in Japan, suffered damages from several fires. The version that we saw on our visit was rebuilt in 1591, having survived more than 400 years and thus earning its place as one of Japan’s Important Cultural Property. 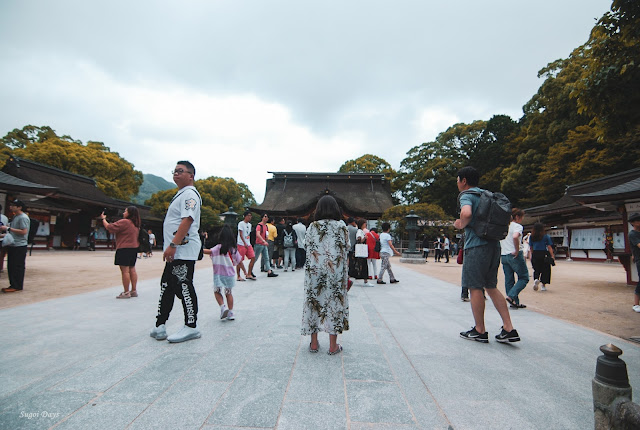 I tried my hand at drawing an Omikuji for JPY100 and found my luck to deeply scribbled in Japanese. I also noticed a maiko serving tiny cups of blessed sake for a small donation and opted for one. Because one could use all the luck she could get. 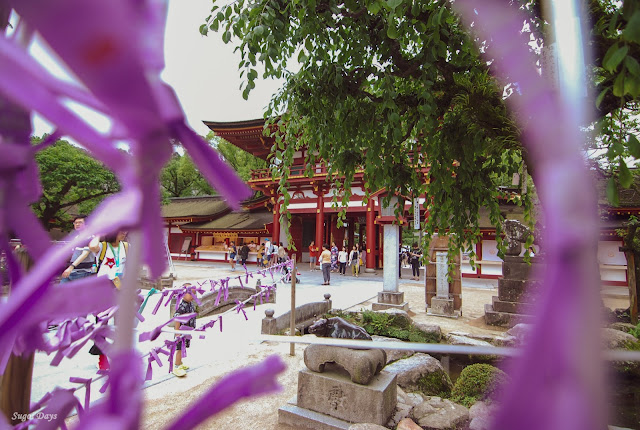 We took a shortcut out of Dazaifu Tenmangu Shrine and headed back to Starbucks to rest. The crowd wasn't as insane as easier but there was still a queue to order. Thankfully, Japanese efficiency prevailed and we got our orders fairly promptly. 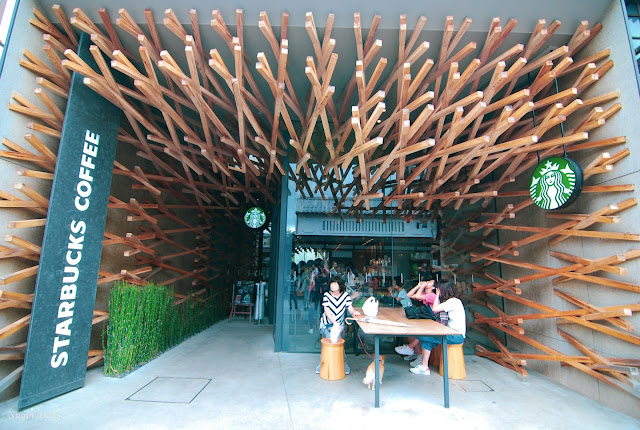 Even more amazingly, was us getting a table and even an opportunity to photograph the iconic wooden beams that runs across the walls. Each beam was exactly 6cm square in section with lengths ranging from 1.3m to 4m. The pieces are woven together on the diagonal with notches carved into the beans to allow them to fit snugly and held in place by stainless steel pipes. If viewed from the side from the entrance to the back, it added a sense of depth and gave the sense as though we were drinking coffee in a forest. Much deep. 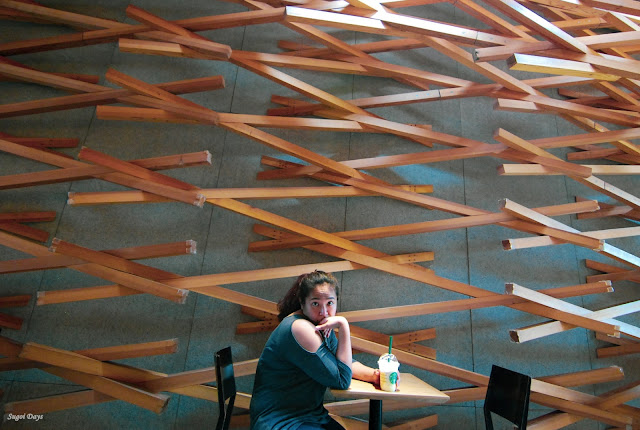 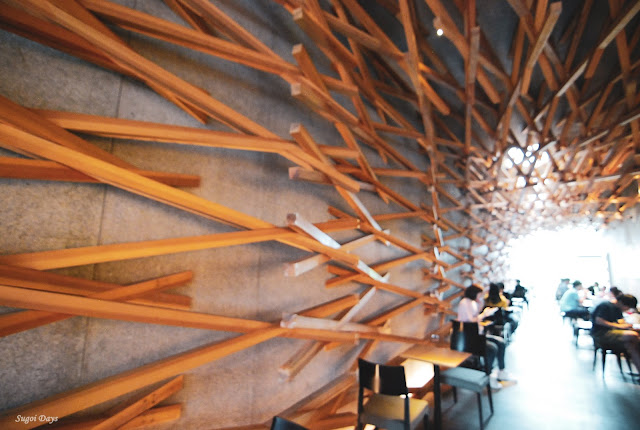 Nevertheless when the crowd started growing again, and people started eyeing our table like vultures, we hightailed it out of there to resume the drive to Kumamoto. There was in fact, many things to do at Dazaifu Tenmangu Ometosando and so I would recommend going early and taking your time while there. Just don't come on a weekend because the crowd was crazy.
Posted by Tania at 9:47 AM