When I first mentioned this restaurant to my friend Elie, her immediate response was... "Oh, I am up for Japanese food!" The second time I brought it up, she decided it was Korean before a quick Google search quickly corrected her. "What, it's Indian?" 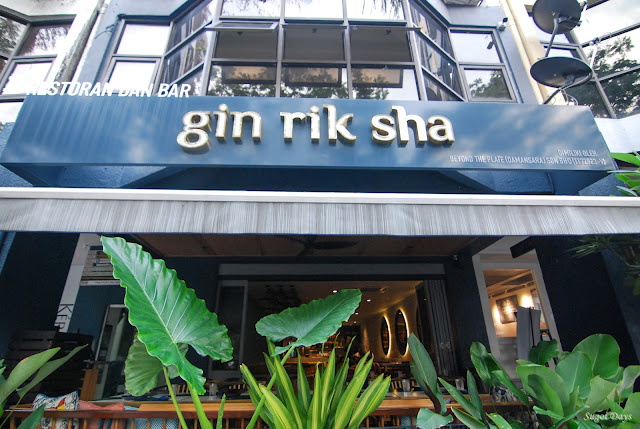 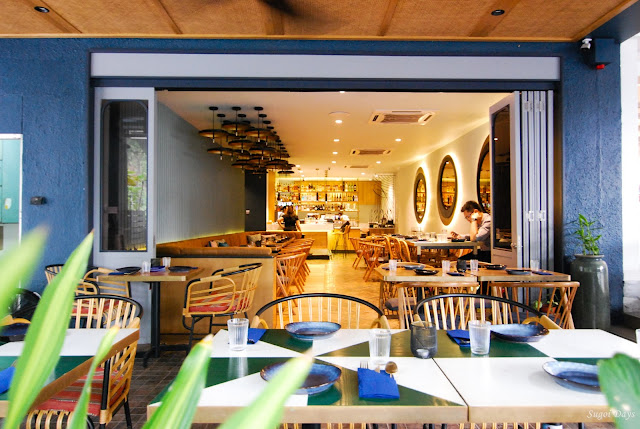 Like many before her, Elie had been left astray of its specialities due to its name. A name that follows after the Japanese term for rickshaw, Jinriksha or rather the man pulling the rickshaw itself. Rather cleverly also, the name as it implies, is pretty much a dead giveaway of its bar specialty - Gin. You could think of this restaurant-cum-bar hideout smack in the drink hole hotspot of Plaza Damansara as your bringer of gins. I know I do. Years of failed experimenting through different types of alcohol mixes has made me realised that gin was my go to drink in a bar (in the absence of umeshu) 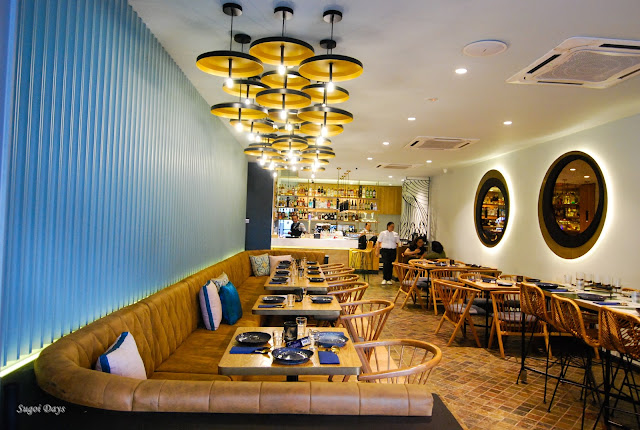 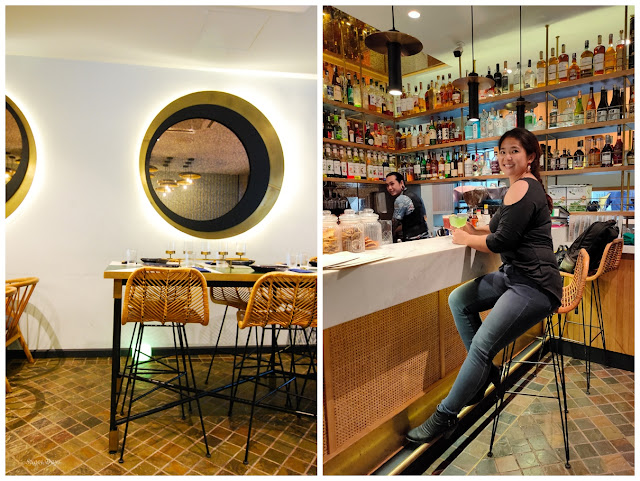 When we got to the restaurant, we kicked off the evening by interrogating the resident mixologist with his recommendations of gins for picky people like us. But very easily though, he quickly gave us his recommendations based on our liking and well, the drinks were indeed up to our liking. I got the refreshing Keralan Southside (RM33), a concoction that mixes gin perfectly with kaffir leaf, mint leaf and lemon juice. Meanwhile Elie got the Laal Adrak (RM48), a sweet and sour drink of gin, raspberry puree, ginger syrup, lemon and apple juice. 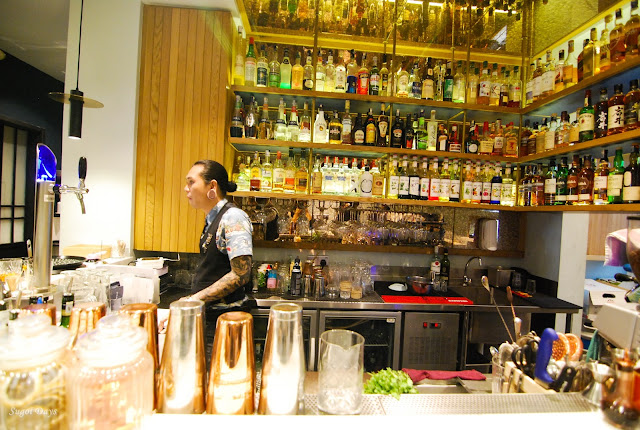 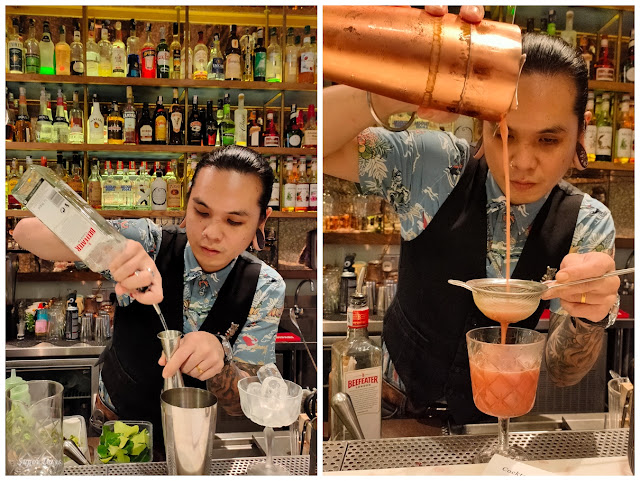 When Isabel joined us not too long after, Mr Mixologist went off books and made her a something something pandan. Basically a pandan-gin-based drink that deliciously good as well. The drinks at Gin Rik Sha are infused with a touch of Indian, some even taking a familiar Indian drink or soup and adding a boozy touch to it. The drinks were, to put it simply, quite innovative. One of the ladies' favourite was the Lavender Sour (RM39) - gin, lemon juice, lavender syrup and egg white. One that initially tasted like lavender soap but gradually mellowed into a floral tasting lemon-gin drink.
The dishes at Gin Rik Sha are portioned for sharing...or not. Some of them were so delicious that the temptation to not share them was real. Like the paneer piccata (RM22) for example. A delicious homemade and compressed pan fried curd and served with capers and onions that comes in three slices, perfect to go alongside a glass of beer or gin. Until today, I still have cravings for it.
Another starter that goes well with beer was their pop corn tempura (RM14) - literally sweet corn fried in light tempura batter. As someone who doesn't like corn, I found this a pleasant surprise as it wasn't so oily. For a light refreshing starter, there was the mango chicken pappadoms (RM20) best eaten as soon it was served as the mango juice soaks through the pappadom.

The chicken briyani (RM30) was fragrant with each grain evenly coated and the meaty chunk of chicken flavourful and fall-off-the-bone tender. Best eaten with the side of sweet pomegranate raita. The bombay masala salmon (RM38) was fairly decently with a sizeable portion of fresh salmon, baked with masala and served on a bed of couscous. And you know what they say about couscous - so good they named it twice. After a night of rich Indian food, this dish was borderline healthy.
Next was my favourite part of the dining (other than the drinks) - dessert. The baked yogurt pudding (RM20) topped with berry coulis and almonds tasted like something I could get at a hipster cafe in the morning. While there was nothing wrong with it - it was quite smooth and light in fact! - the yogurt pudding failed to leave an impression. Or rather it was outshone by our second dessert - the kulfi with caramelized bananas and sesame brittle (RM22). Forget taking photos of this dessert because it melts super fast but oh boy, the kulfi was a delicious smooth treat indeed and a nice closing to dinner.

We were there at the start of dinner service and by the end of the evening, the restaurant was half filled up with large groups and couples. Gin Rik Sha would easily be the type of place I would bring my friends to for catch up sessions (just so I could sate my paneer piccata and kulfi cravings) because the ambiance was vibrant and quiet and the service, prompt and friendly (based on my observations of other patrons that evening). 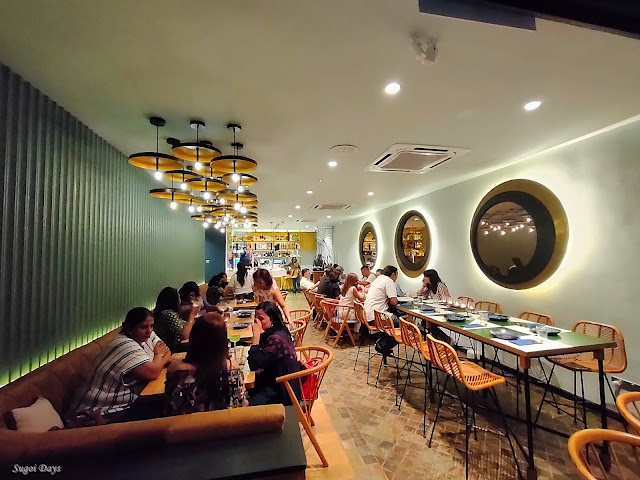 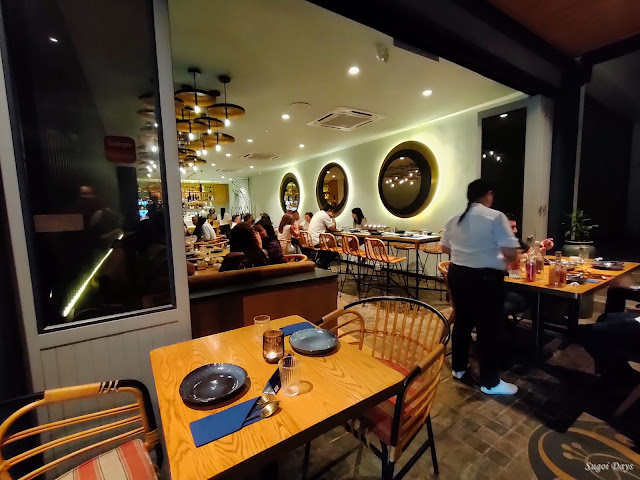 Needless to say, Gin Rik Sha has quickly made its way to the Top 10 of my Must Visit Restaurants for Special Occasions. I am already planning my course for a return visit. 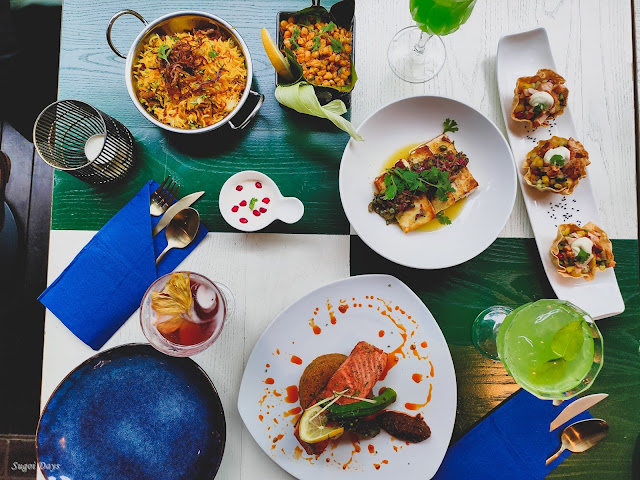 Food Tip:
If you're planning on heading to Gin Rik Sha anytime soon, here's a tip. Make a reservation using Eatigo and you can get discounts of up to 50% off your bill depending on what time you book. Otherwise, go in a big group and split the cost, you will realise that it isn't really all that pricey and you get to try a lot more innovative Indian dishes from this restaurant. 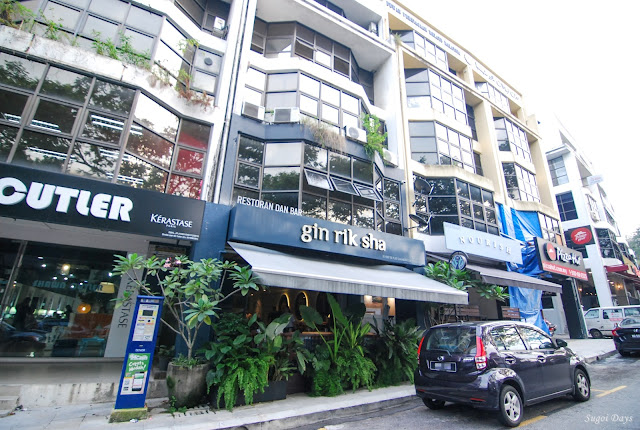 Disclaimer: This was an invited review but all thoughts and opinions are entirely my own.
Posted by Tania at 12:19 AM