Kumamoto, Kyushu [Day 2] - Kumamoto and Miyazaki in One Day 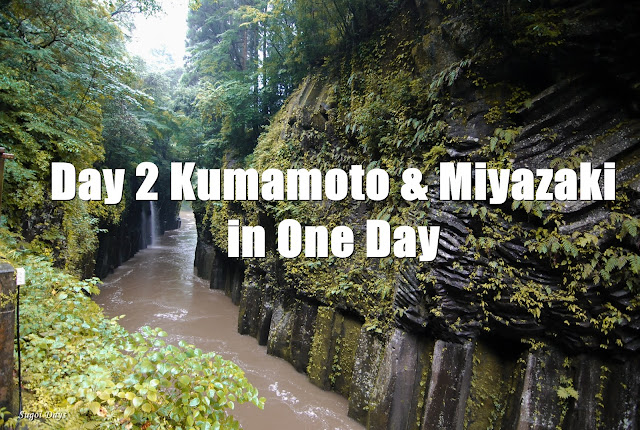 This day was the wettest day of my entire trip and it was also the one day when we had the most outdoor activities in the outskirts of Kumamoto and Miyazaki. I could have cancelled everything but decided ya know what, we have the car, let's just head out and see how the weather holds up. 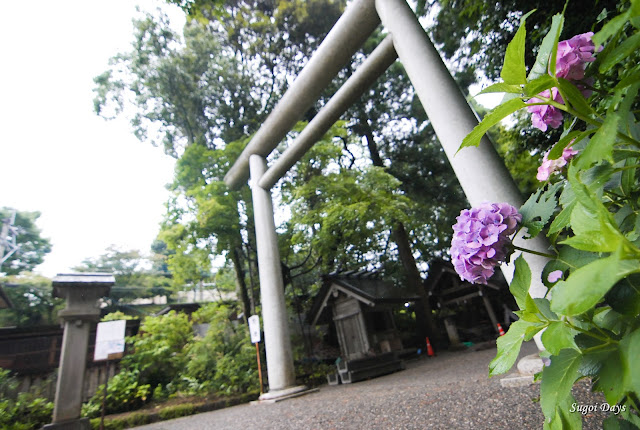 Because we had a full day ahead of us, we departed the hotel at 730am and started making our way to Takachiho in Miyazaki. Rainy day aside, it was the most scenic drive of the entire trip with a long trunk road that took us through several villages in the hills and along a beautiful river with the water swollen to the banks. We made a stop a random combini to use the toilet and buy coffee and food. The locals were so pleasant and friendly despite not knowing what my grandmother wanted with her version of charades. 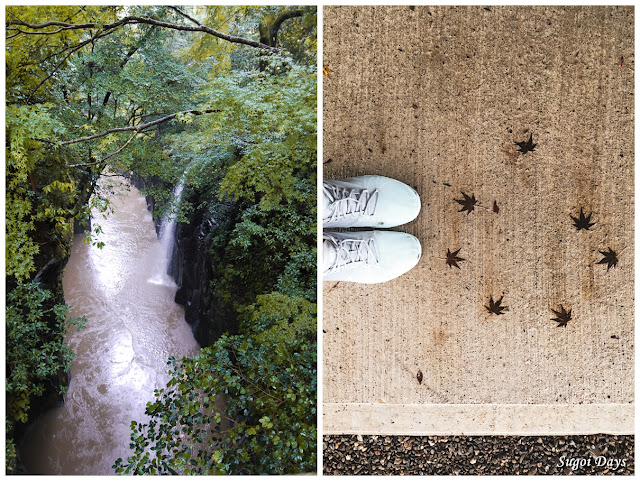 It was still pouring by the time we got to Takachiho Gorge and I knew that my boating activity was officially cancelled. What a bummer. But it didn't mean I could take a leisurely stroll along the gorge especially after two hours of driving. I parked at the parking lot nearest to the boating docks and waterfall, paying JPY500 to friendly uncle. And with an umbrella, I went off for a walk with my parents trailing behind while my grandmother went to explore the shops and cafes nearby. 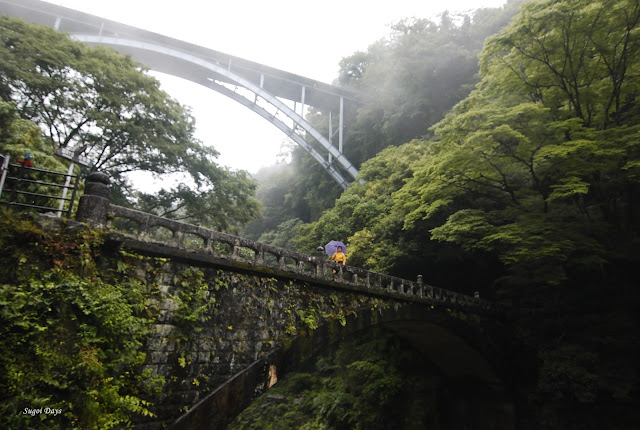 Despite the rain or because of it, there was a different aura about the gorge from what I've seen from online photos. The rain had deterred the usual tourist crowd and it was almost empty of people as I walked the 2km stretch of towering rock structures and muddy pathways along the river to the bridges and back. The water from Mount Aso was rushing along the river, brown as it delivered mud, dirt and debris from the mountains. On a good day, the water was supposed to be clear blue. 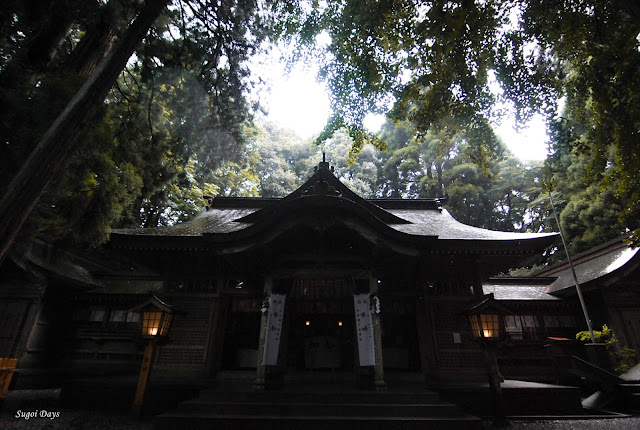 After Takachiho Gorge, I made our way to the main town area and made a quick stop at Takachiho shrine. The trees around the shrine were towering indicating decades of Mother Nature's handiwork in grooming these cedar and cypress saplings into the massive guardians that they are today. The leaves were so thick that they almost blocked out what little sun rays we had today. Beside us, the only other people at the shrine were the local maikos.

Just up and around the corner from the Shrine was Nagomi, a well known Miyazaki beef restaurant in the area. Every review I've read on Takachiho had recommended this place as the best offering of award-winning beef in Miyazaki. Long story short: it was especially the loin set. For those on a budget, they have a weekday-only beef rice bowl for lunch at a decent JPY1,500. Only five of these are made daily. If you want to buy and pack some raw meat to cook at home, they also have a butcher shop and a fridge display of freshly sliced meat as soon as you enter the restaurant. 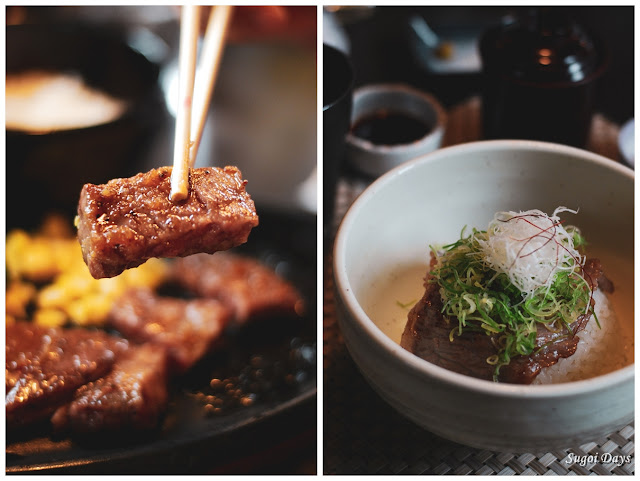 We were supposed to go to Amano Iwato Cave Shrine next but due to a Google Map confusion, we couldn't find the entrance or the pathway to the cave. Parking in this area was free thankfully. But as we explored the area, we came across another Shinto Shrine atop a flight of stairs and behind it, perched on a slope overlooking the river were nine old cedar trees growing closely side by side. Once again, there was only us at this natural wonder. 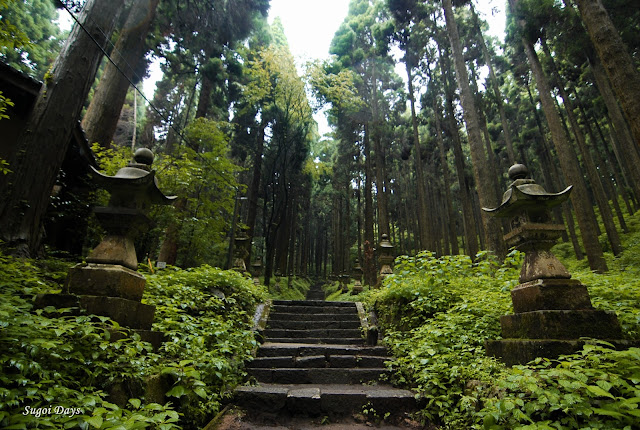 The drive to Mount Aso took another two hours with a quick detour to see Kamishikimi Kumanoimasu Shrine, a place made popular by the anime movie, "Into the Forest of the Fireflies' Light." While there weren't any fireflies around, the place was beautiful with green trees and emerald moss growing atop the stone steps to the shrine. I only wished I had more time to complete the climb to the power spot but unfortunately, my grandmother had stayed behind in the car and we didn't want to keep her waiting too long. After a few photos, we continued on to Mount Aso to a wide grasslands known as Kusasenri. 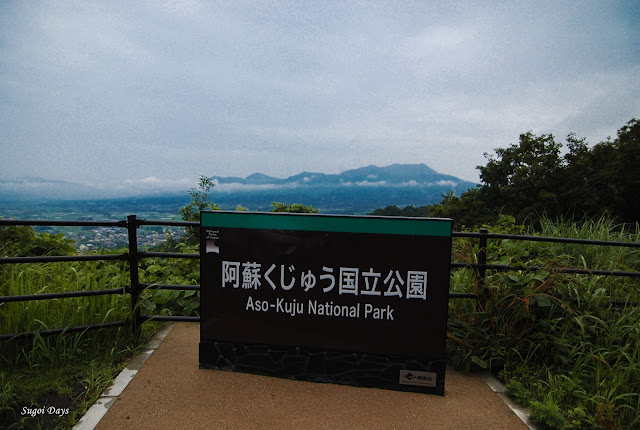 Now, this part of the journey up the mountainside was supposed to be scenic but on that day, it was a scene right out of Haunted Hill. A thick mist had rolled in and my visibility was 5m. I couldn't even see the side of the road where there were sudden drops into nothingness. By the time we reached the glasslands, the rain had picked up again, growing heavier. We decided to wait it out at the Kusasenri Observatory building where I parked myself at the only cafe opened at 4pm and enjoyed a cup of hot latte. Driving around the whole day in the rain was incredibly draining. 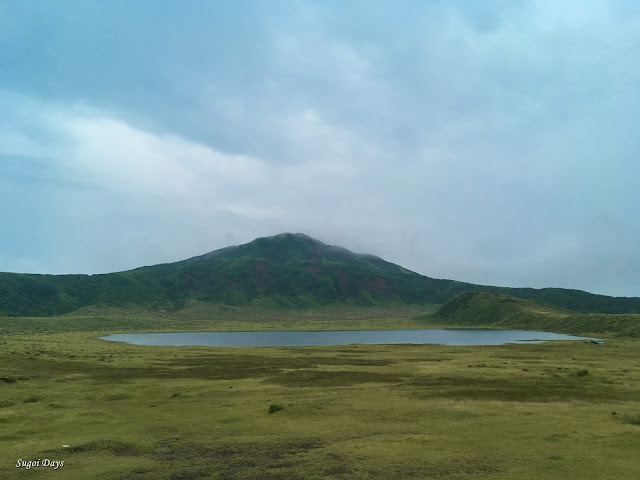 Because of the torrent rain, all activities on the grasslands were cancelled and I could only stare longingly at the herd of horses flocking in the distance. I had wanted to go horseback riding so badly. Other than shopping and eating, there was also the Mount Aso Museum for those interested to learn more about Japan's largest volcanic caldera. Unfortunately, because we had arrived close to closing time, there wasn't time to properly enjoy the experience. Perhaps next time.

The drive back to Kumamoto took slightly over an hour. By the time, we got back, I was all too glad to settle into any random ramen shop closest to the hotel for dinner. My plan hadn't gone exactly as I had hoped on this day. In fact, everything that could possibly go wrong did go wrong but then again, this won't be my last trip to Kumamoto and Miyazaki.

My parting words from this experience - get a co-driver if you're planning to attempt this itinerary or opt to overnight in Takachiho instead.
Posted by Tania at 6:48 PM